Beloved and I had dinner a couple of times at Steveston Pizza. This place, relatively new, located at Tomas Morato, popped up in our Facebook news feeds with pictures from friends that was gastronomically pleasing. Aside from knowing that it’s a pizza place, and that they serve scrumptious-looking pizzas, we knew nothing more than that. We had quite the surprise learning that they only serve one size—foot-diameter pizzas at not-so-scrumptious looking prices. A couple of them was even priced at 1.3K Php—yes, at the same size!

Still, that didn’t stop us from ordering. Our first visit didn’t contain any of the most-expensive-pizza-we-ever-saw offerings. Aside from the premium “C” pizzas, there were the more affordable Pizza Classic, the healthier Margarite Tree, Colours, and The Journeys. We settled for one of their Colours priced half of their “C” pizzas: their Green Pizza (699 Php). Yeah, if you compare it to the competition, it’s still quite expensive. We also ordered their Angels or Oven Baked Chicken (180 Php for 6 pieces), and had them Spicy. The server warned us that their “Spicy” meant Spicy. We took no heed and ordered drinks. 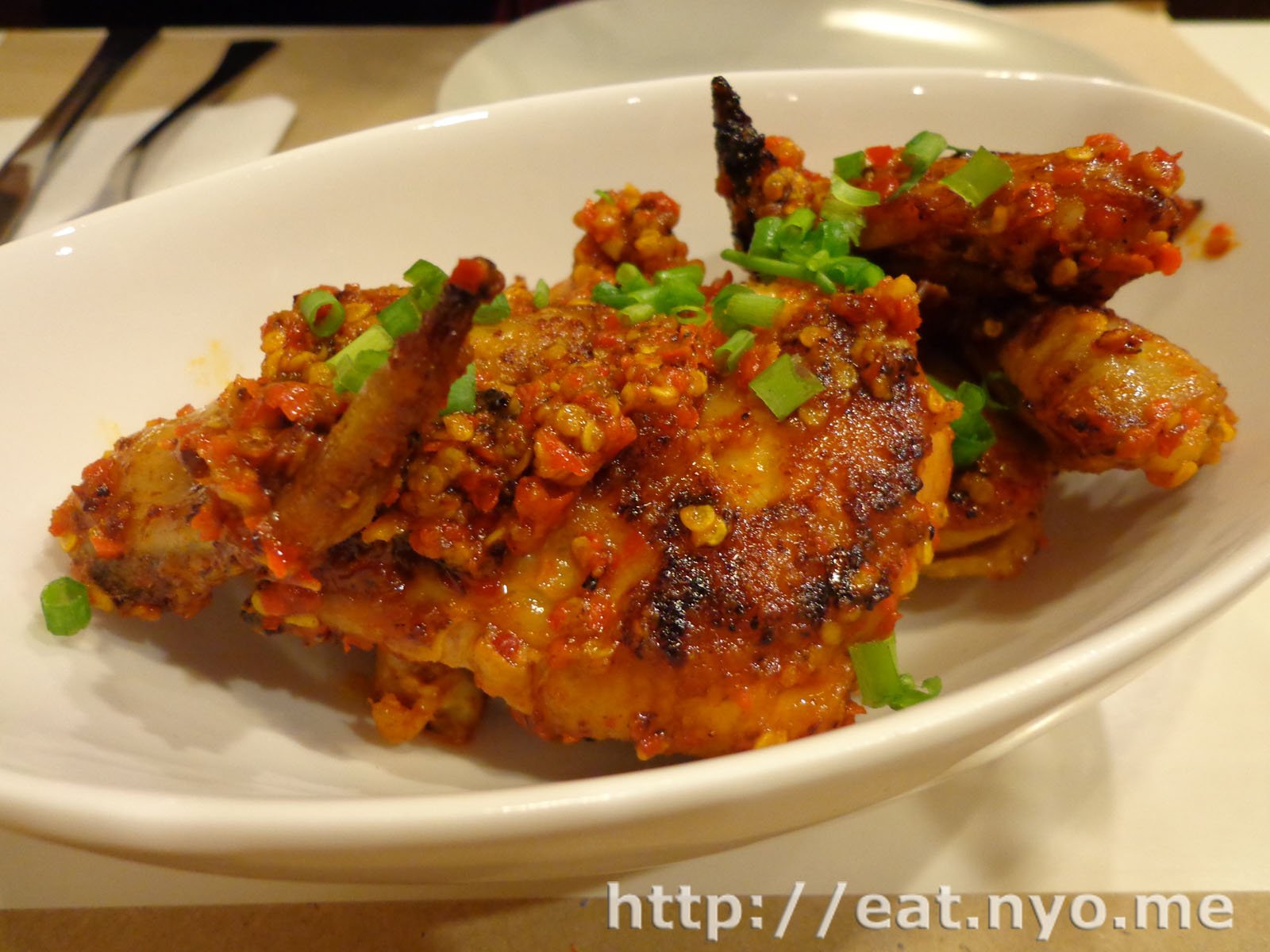 I usually start with the house specialty even if a side or appetizer arrives first. However, our Angels deserves a story. They did mention it was Spicy. Well, they forgot to mention that it was painfully spicy that it dethrones the Dynamite Maki we had at Teriyaki Boy. It’s probably the spiciest dish I willingly ordered and put in my mouth and immediately regretted after. It was an unbearable, painful experience that I regret having, and that’s coming from someone who has little regrets in life. Even Beloved, who has a much higher tolerance to Capsaicin than me, was in as much pain as I was. I found it ironic they call these Angels as they have literally unleashed hell in my palate. 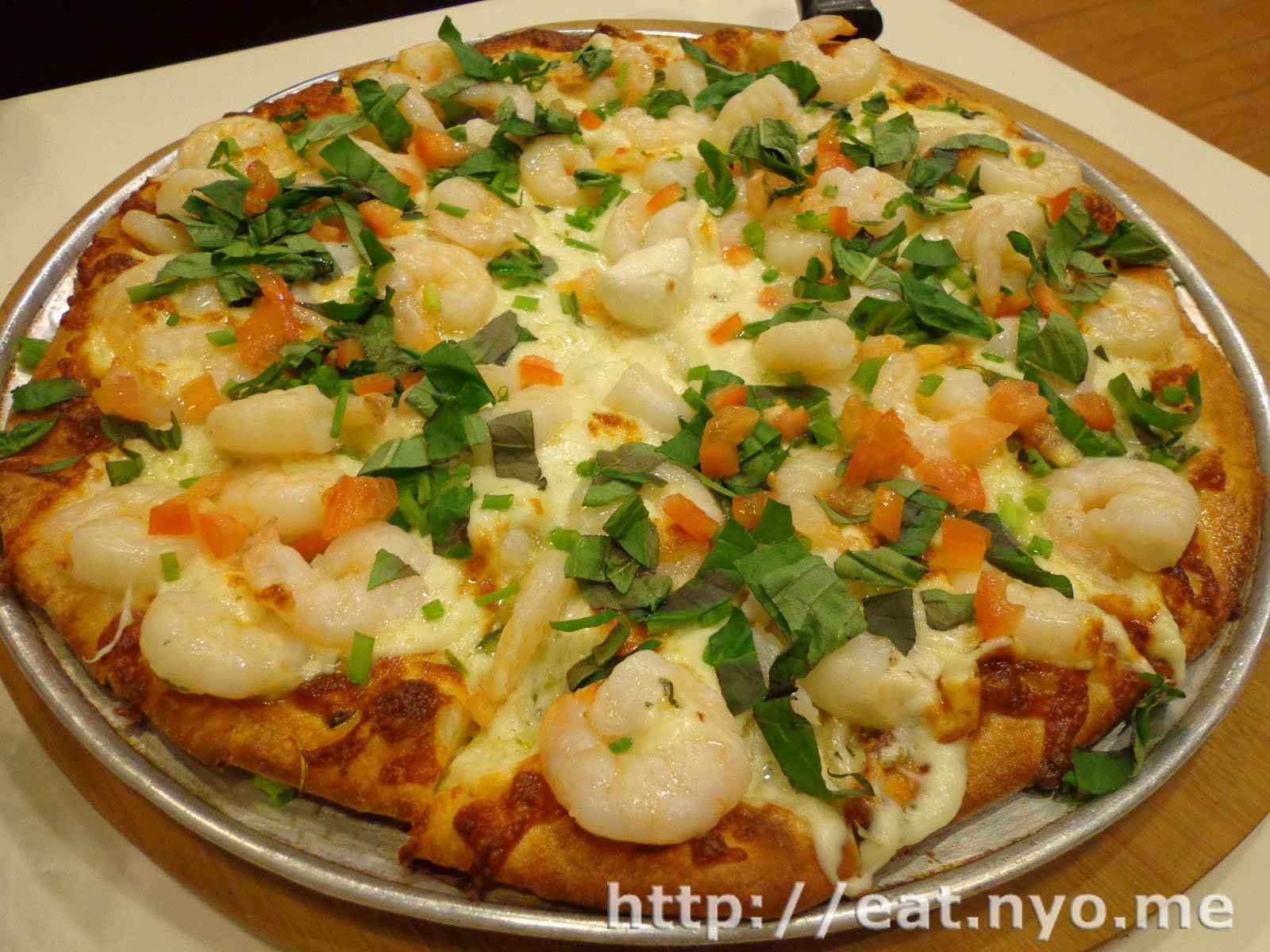 While in the middle of our suffering, our pizza order, the Green Pizza arrived. Although it’s not entirely green, there were tons of coarsely chopped basil scattered over the pie. The main star of this particular pizza were the shrimps, and, boy, were there lots of shrimps. Each slice has at least four, where in other places you’d be lucky to have two. And these aren’t puny shrimps either. They looked quite hefty for shrimps. And they were quite scrumptious too, especially with the stringy cheese. The underlying cheese had hints of the advertised pesto butter, and the scallions, like the basil, were plentiful. Speaking of cheese, there was a single blob of mozzarella in the center. Why it is there I cannot say. The one thing I did not like about this pizza was how its crust was soggy, devoid of any crispness that I look for in pizza. Perhaps some people like it this way. I am not one of those people. I also found it quite difficult to consume with your hands. A plate is definitely required, as the toppings would definitely fall off the crust.

A couple of weeks later, we came prepared to purchase one of their most expensive items in the menu—their “C” pizzas. The one we chose was similar to the one we ordered: their C1 (1,299 Php). Aside from the price, I won’t spoil anything else until the next paragraph. 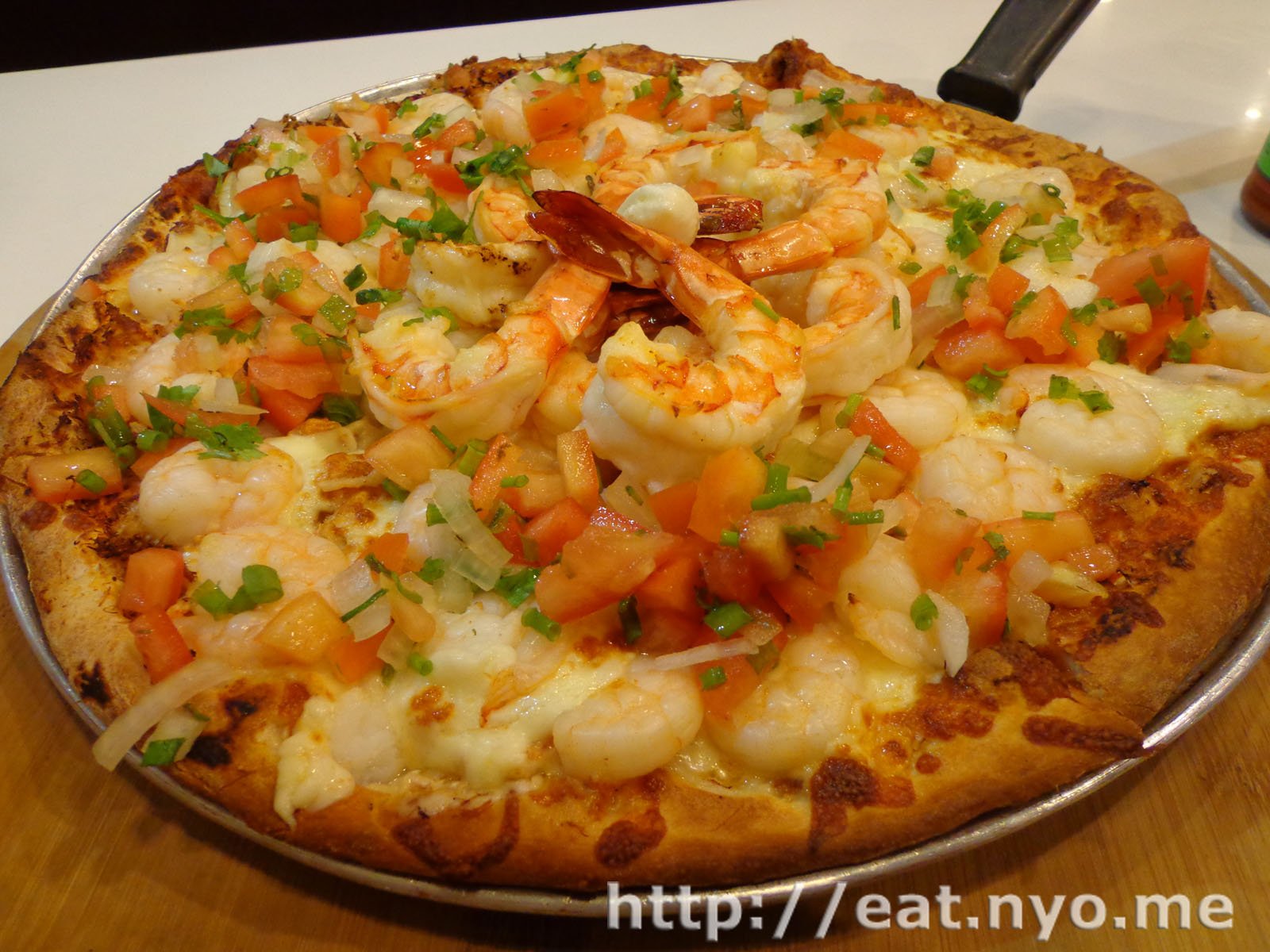 Behold, the C1. It’s quite similar to the Green Pizza we ordered before, except this one has prawns on the center. Each of the eight slices has a guaranteed prawn. What can’t be seen from the picture is the fact that there was crabmeat in the layer of cheese. Like our previous pizza order, the toppings individually were divine. Since we love shrimps (or prawns), crabs, and cheese, both Beloved and I have no complaints to the noticeably fresh ingredients and the scrumptious way they turned out. However, together, it was a bit underwhelming, especially for the price. The shrimps have a hard time staying on the soggy crust, and we basically ate the prawns separate from the pizza. The combination of cheese and crab and soggy was quite cloying. Although admittedly, the entire pizza was covered in toppings, I didn’t find it as satisfying as something I would’ve wanted to spend 1.3K Php on.

The first time we visited, a newspaper article clipped on the wall beside where we sat the first time we visited spoke only praise to this restaurant, starting from the first inhaling of the fragrant aroma down to the last harmonious bite. Sadly, we didn’t experience such ambrosia. The first time, I thought we were just too busy suffering to notice the aroma the article claimed. However, even upon ordering the solo 1.3K Php pizza, I didn’t find it that aromatic. Also, it wasn’t really harmonic. For me, the pizzas we tried out here at Steveston Pizza was like a cheese-filled platter of freshly baked ingredients (seafood in our case), only with a soft bread that can barely hold the ingredients for a plate.

Now, again, I must stress that the ingredients they used were exquisite on their own. This place has no doubt the freshest and most scrumptious shrimp I’ve had on pizza. However, I really personally cannot call this pizza. Some will probably argue against me, but if the crust isn’t crisp and cannot hold the toppings, I cannot call it pizza. Not to mention the ridiculous tag. Using bad math, their “C” pizzas cost more than 100 Php per inch. Still, if you have some cash to burn and want to try out something fresh, Steveston Pizza will give you the best quality toppings-on-cheese-on-soft-crust for your money.

Not recommended for: Crisp crust lovers.