Another ramen place? Sure, why not. Beloved and I had dinner a couple of times at Hokkaido Ramen Santouka at Trinoma. This relatively new ramen place opened its doors at Trinoma’s fourth floor alfresco area, replacing our old tambayan Timezone Arena. Good old days.

Anyway, our first time was a couple of weeks ago with friends. Since that was a bit unplanned in Beloved and my part, we weren’t really sure what to order there. Luckily, our friends have been here a couple of times and, to my surprise, they recommended not their ramen, but their set meals. They actually have quite a few, pairing up ramen with salad, dessert, and another main dish. Most of their stuff in the menu were the usual Japanese fair, such as tonkatsu, Japanese curry, and ebi fry. However, I found one item unique, which was why I went for that. I ordered their Set J (470 Php) with shoyu broth. Beloved ordered their Set G (470 Php) and added 20 Php for their kara-miso broth. We also ordered their Kurobuta Gyoza (240 Php) because the sets didn’t look very filling for us (very big disclaimer for normal eaters here). 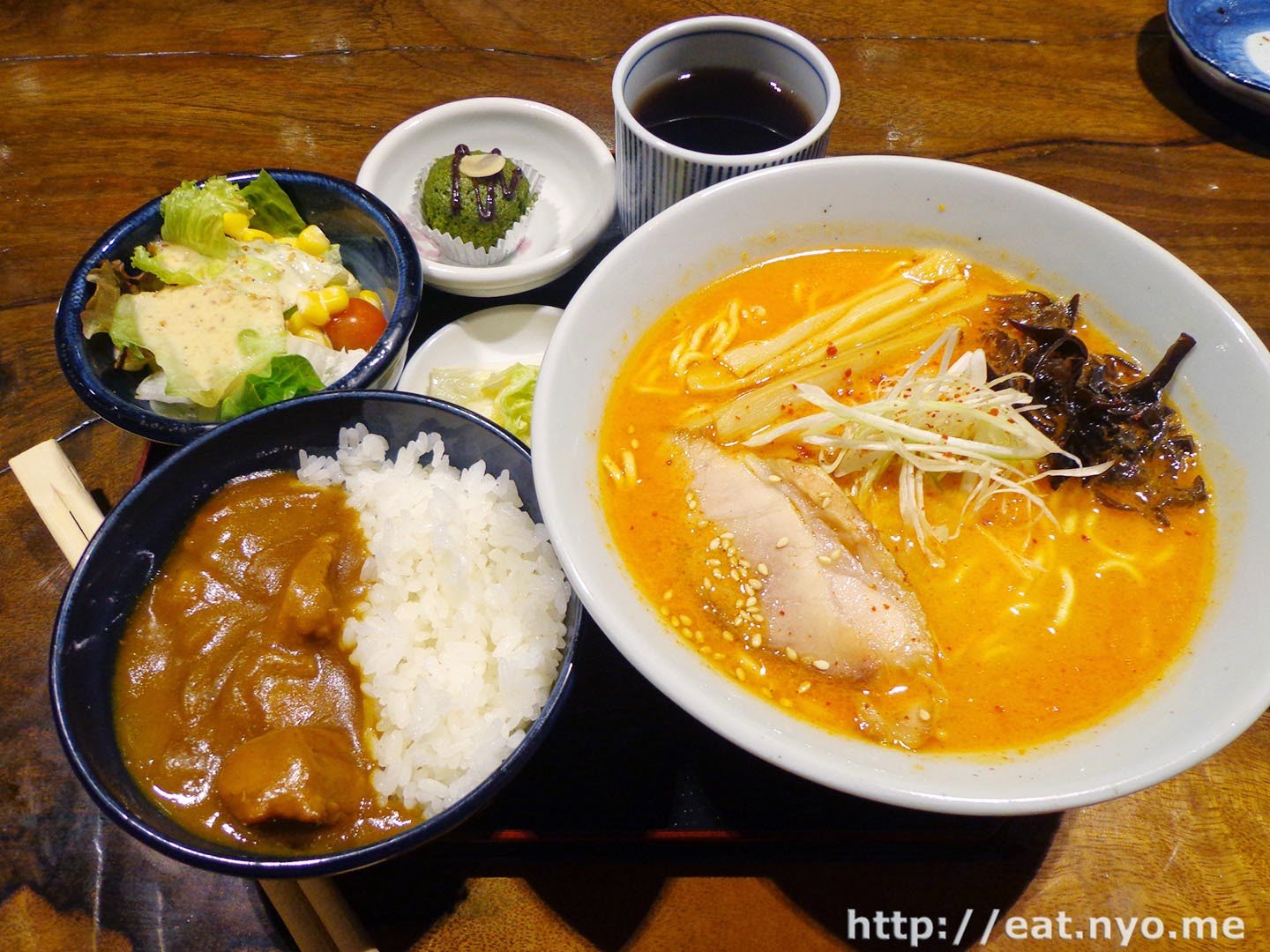 Beloved’s Set G had Japanese curry rice with her kara-miso broth. The broth is essentially miso with hot soybean paste, giving it a touch of spiciness. Aside from the obvious broth and noodles, it also has some bamboo shoots, a couple of chasyu or barbecued pork slices, chopped spring onions and kikurage, which I think is some sort of mushroom. These toppings gave the ramen an interesting variation in texture. The noodle choice they have was also a different one from the ones we’ve been to recently. Instead of the straight, thin noodles we’re used to, their ramen used wavy, slightly thicker, and more yellowish noodles. I found that the broth didn’t stick as well to them, and they didn’t have that nice bite that both Beloved and I look for in ramen noodles. Honestly, it felt a bit cheap if it weren’t for the nice assortment of toppings and the broth. Speaking of the broth, Beloved’s choice had a nice spicy taste overlaying the refreshing miso layer, which she enjoyed a lot, much more than the noodles.

As for the rest of her order, she also enjoyed the curry. The meat was soft and the spiciness was nice, according to her. The rice was also authentic Japanese rice which was pretty sticky, so she was able to consume the rice bowl with just chopsticks. The set also included a bowl of salad, pickled cabbage, and a pistachio pastry. The former two was a bit forgettable, but I did enjoy the salad. Beloved didn’t like the pastry which I gladly consumed for her. Not that these matter, because according to the menu, these differ per day. 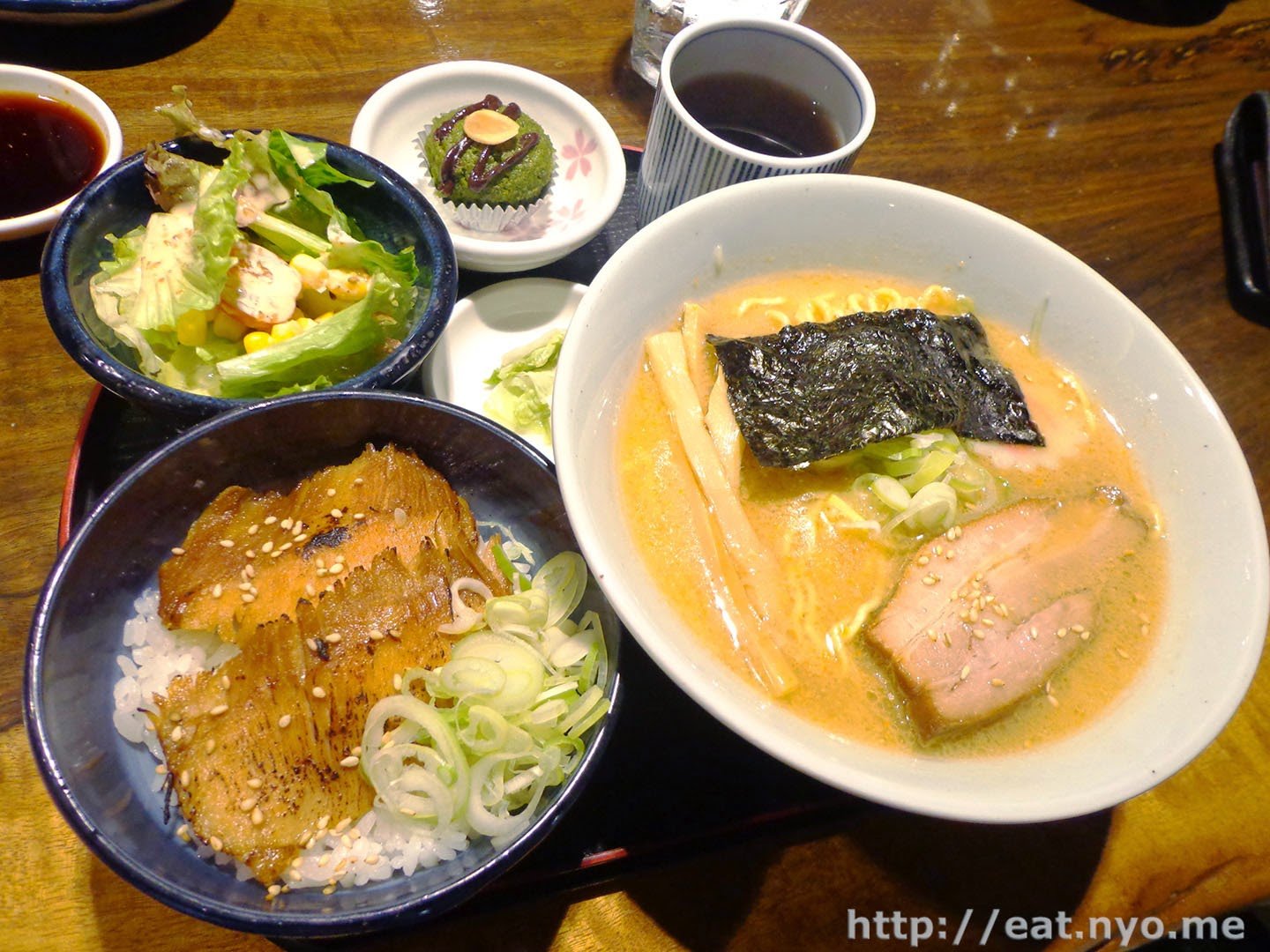 My Set J differed in the broth choice and the secondary main dish. Instead of Beloved’s spicy broth, I opted for my preferred soy sauce-based broth. It also didn’t include the kikurage and instead had nori or dried seaweed in place. The broth was pretty mild and forgettable. The real star of the dish here was the included aburi toroniku rice bowl. This particular part of pork was the pig cheeks, according to the menu, roasted just enough to be called cooked. And man, did I fall instantly in love with how tender and delicious it was. The only flaw was how expensive it was in regards to the amount they served. 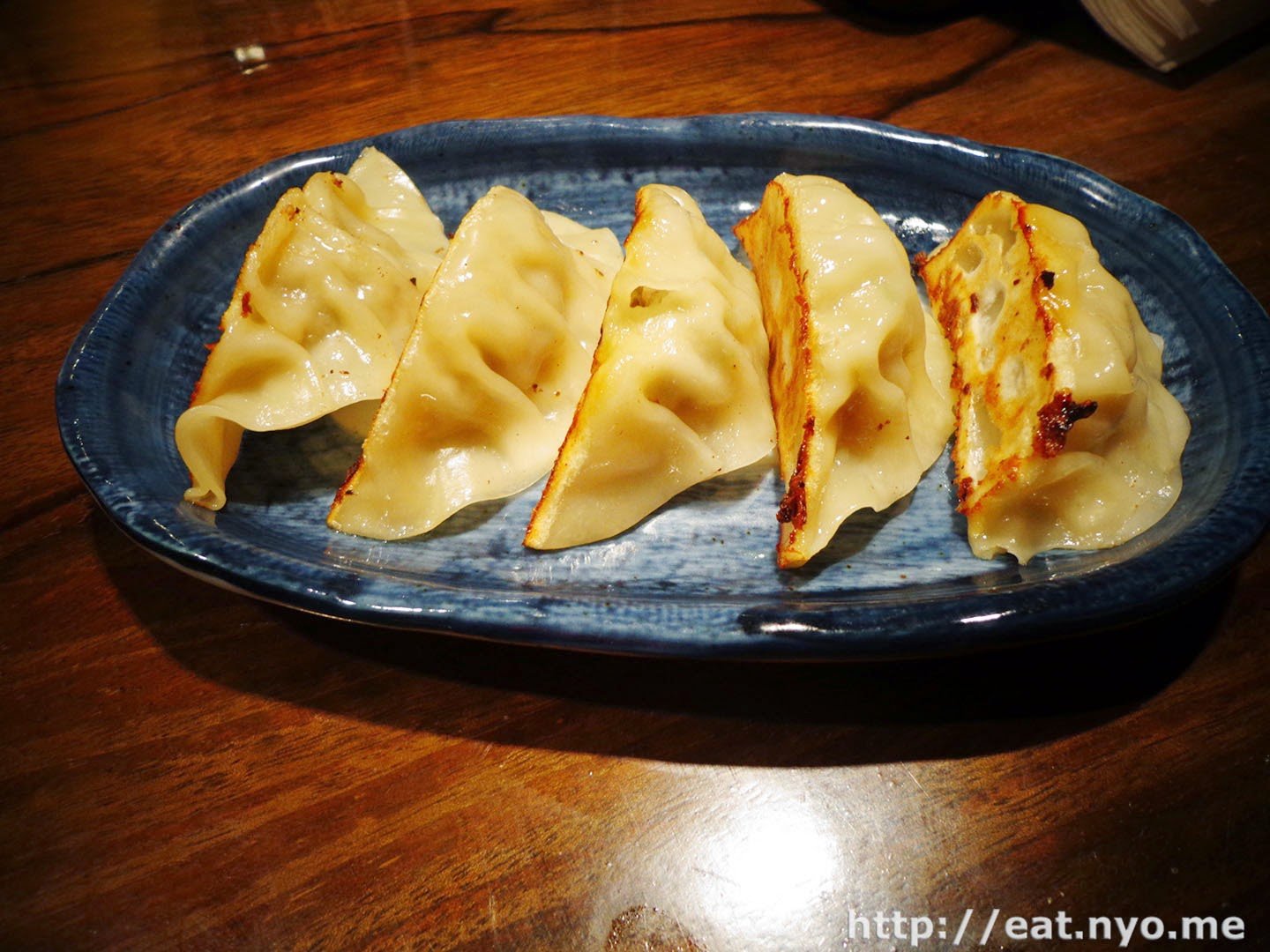 The Kurobuta Gyoza was a bit of a disappointing one. It didn’t taste any different from the other gyozas we’ve partook in. I was expecting a melt-in-your mouth experience, but I guess it was overshadowed by the toroniku. Not that it’s bad, just didn’t meet our expectations.

We went back a couple of weeks later, mainly because we thought the set meals weren’t the best order in the house and wanted to try more of the main dishes that came with the set meals we ordered. This time, I ordered their large Special Iberiko Tokusen Toroniku Ramen (650 Php) with shoyu broth just so I can compare how large it was over the small bowls included in the set meals. Beloved ordered their Karaage Curry (430 Php). We also ordered their Mixed Seafood Furai (280 Php). 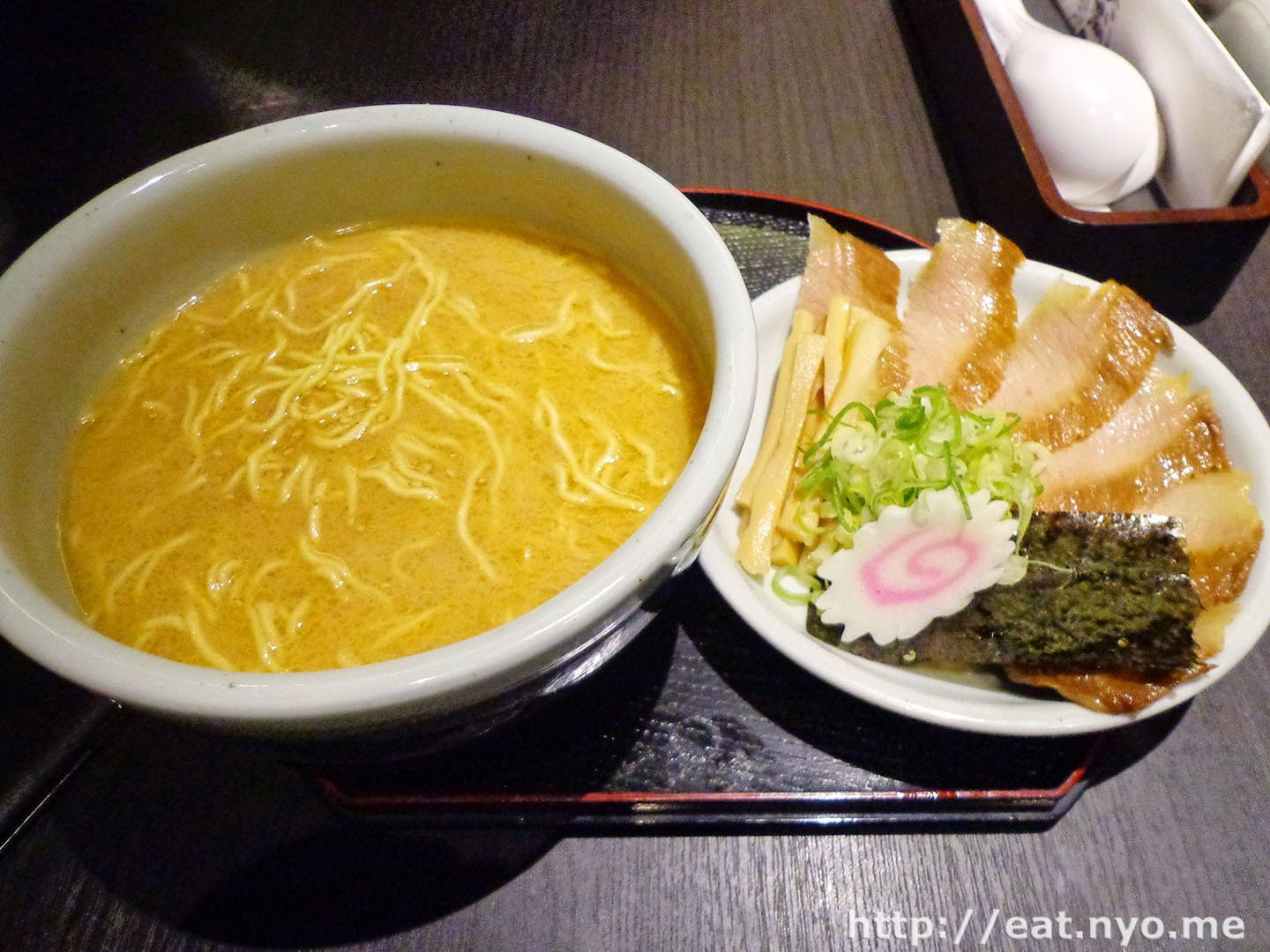 The Special Iberiko Tokusen Toroniku Ramen, as you might have guessed, was basically ramen with pig cheeks. The toppings were served in a different plate from the bowl of pork-soy broth and wavy ramen noodles. The noodles didn’t change much, but the hot broth helped make the already delicious and tender pig cheeks soften up even more, making it almost melt in your mouth. I also realize that this was one of the most expensive bowls of ramen I’ve had. I can’t really call it good value because I didn’t enjoy the broth and noodles as much as I did the pork cheeks, which I could’ve ordered on its own for a fraction of the price. 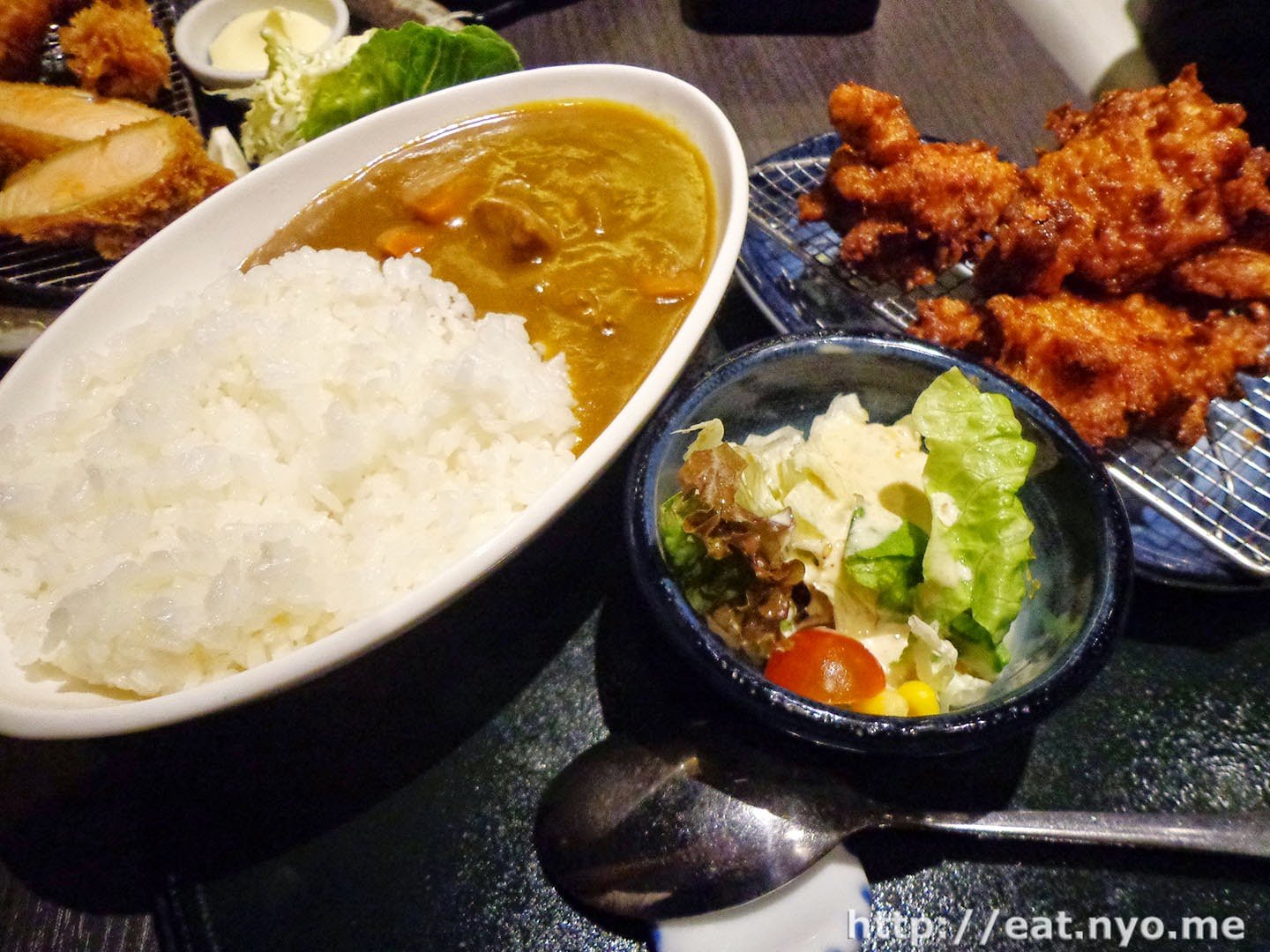 Beloved’s Karaage Curry was not a ramen dish. The karaage also wasn’t the one covered in curry. Instead, it’s the same curry dish we had a couple of weeks past with karaage on side and bonus salad. The karaage wasn’t that bad. It’s not oily and had a nice crunch on the outside, yet still had soft, tender chicken meat on the inside. However, it’s not much different from your usual chicken dish. Beloved still enjoyed the curry, perhaps much more this time since there’s more servings.

Overall, it was an interesting place. Interesting and expensive. For the two nights, we spent upwards 3,000 Php. I didn’t enjoy the ramen as much as other recent places we’ve tried, but that was just because of preference. The food didn’t have an extravagant feel, but a homely one, which some might prefer. One thing I did regret was not ordering their shio broth which, apparently, they serve with pickled plum. If it weren’t for the pork cheeks, this place is just another “pwede na” on our list. So if you’re taking my word for it, go to Hokkaido Ramen Santouka for their pork cheeks, which doesn’t require you to order their ramen.

Smart nomnomnom tip: Go for their sets and/or go for their pork cheeks.