The other day, beloved and I ate at Tempura Japanese Grill. The first time I tried this resto out was the one in Tomas Morato. Then, the one on Trinoma during its opening, which is what my review is about.

Obviously, they specialize in Japanese food. What’s special is that each table has their own grill so that customers would be able to grill their orders themselves. However, we have never tried the grilling part. While their grill is not part of this review, their tempura is. The first time I ate here, I fell in love with their tempura. Although a bit pricey, at around 45-60 Php each, depending on how many you order, they have certainly filled my tempura cravings. Suits their restaurant’s name well, I must say. Ah, but I digress, on with the nomnoms.

We ordered noodle soup for both of us. Mine was Tempura Ramen and beloved’s was Tempura Udon, both at 190 Php. For those who don’t know, they’re basically the same soup, but ramen noodles are thinner and udon is much thicker. 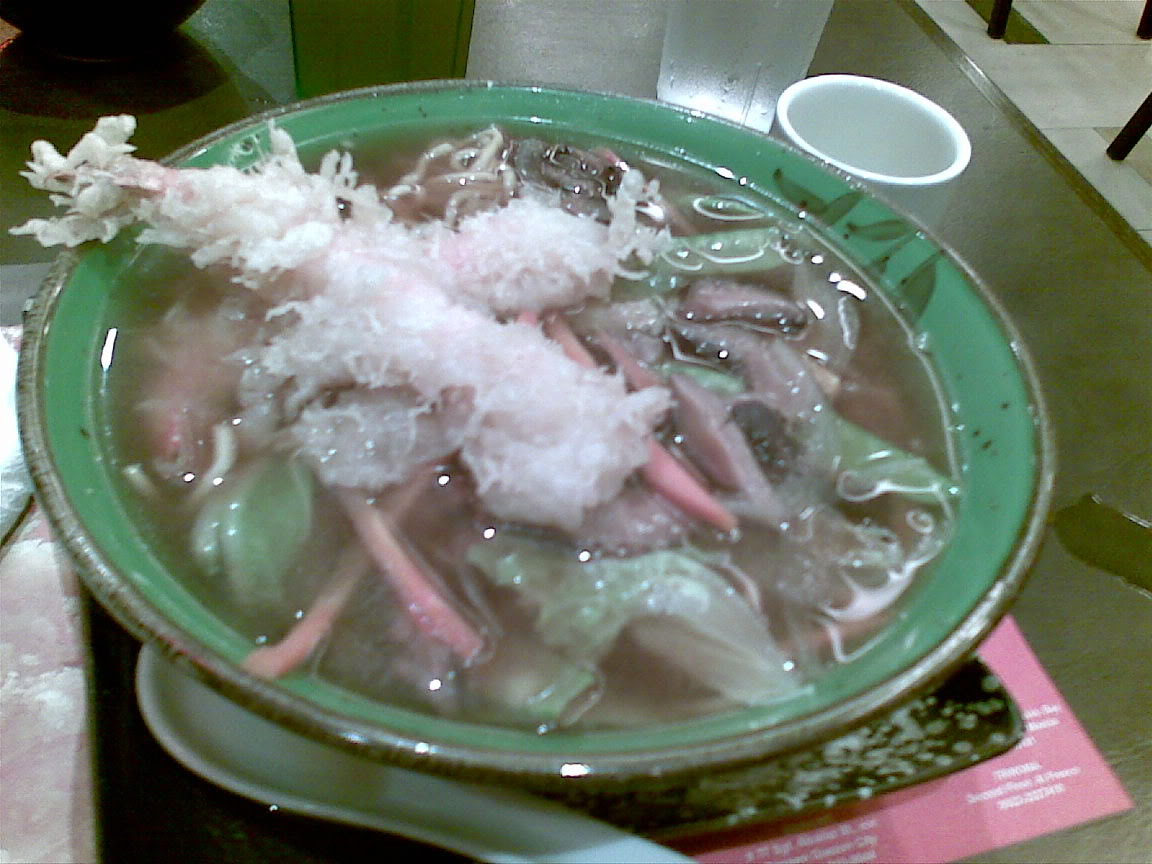 I find the texture of ramen much nicer than udon. I like the feeling of a lot of noodles dancing around my tongue as I eat. Tastewise, the noodles taste quite good. The broth tasted pretty earthy, absorbing much of the taste of the vegetables in it; and it’s filled with lots of them—shitake mushrooms, cabbage, carrots, string beans. It’s topped with two pieces of tempura, which I usually like crunchy. However, the amount of shrimp inside the tempura covered in the tasty batter makes up for the texture. 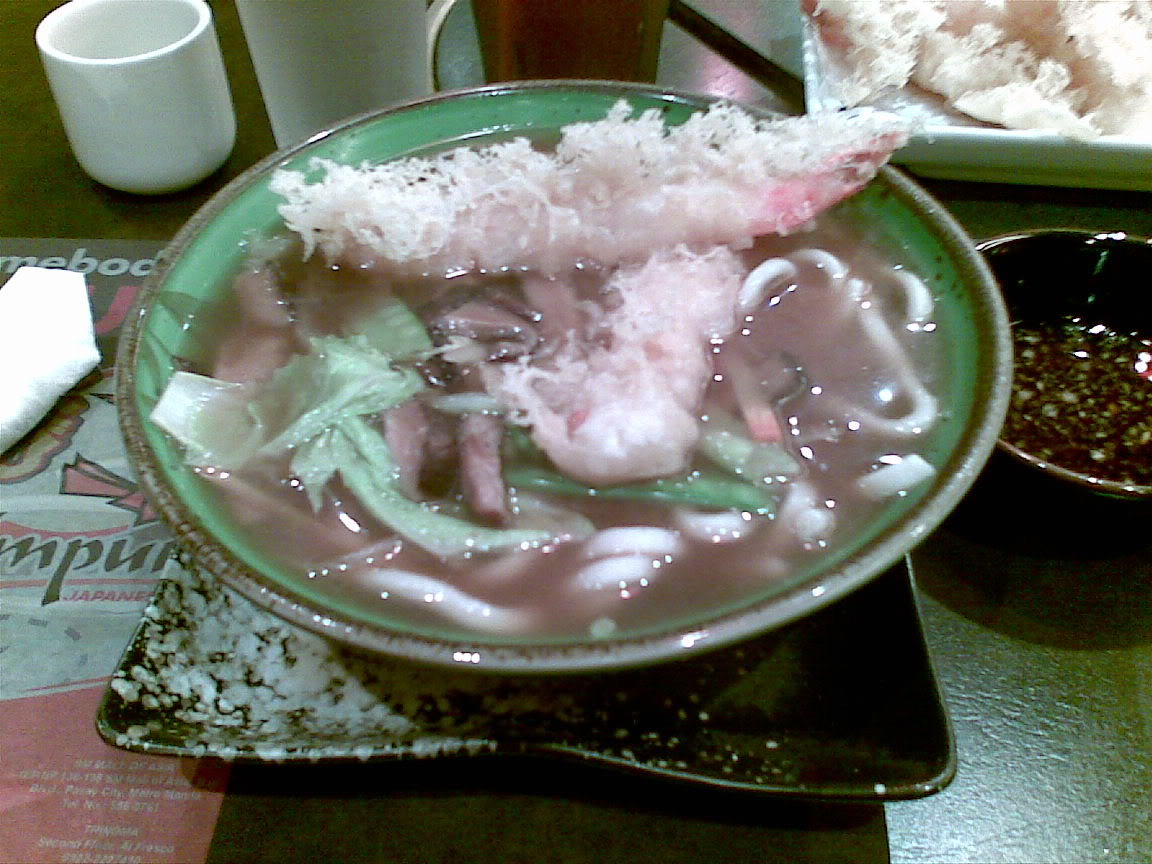 I don’t really like thick noodles, but the udon noodles also taste good. The vegetables in the soup and the taste of it is practically the same as the ramen soup. 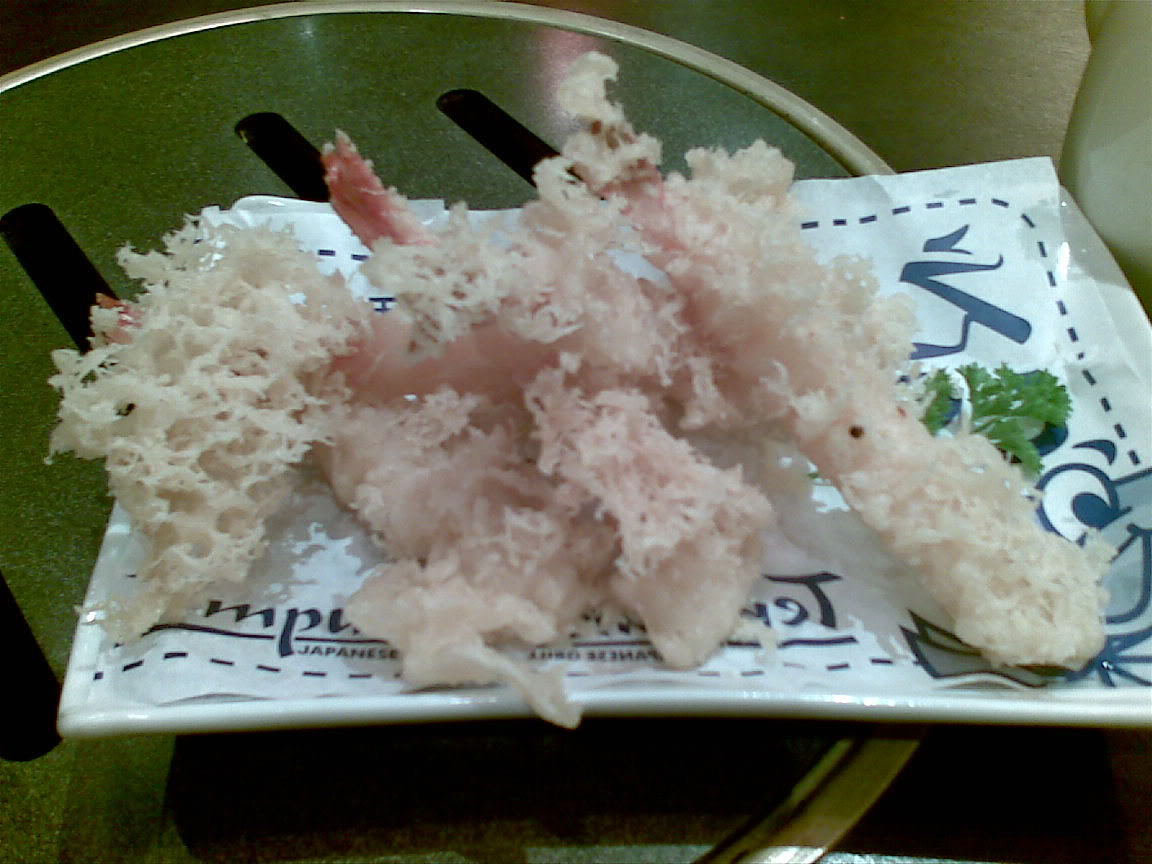 We also ordered 5 pieces of their shrimp Tempura (255 Php). They also come in 3’s or 8’s. And, as I mentioned earlier, this is probably the best tempura I’ve tasted in the metro. The shrimp makes most of the mass of the tempura, unlike the flour-tasting thickly-battered tempura in most other restaurants; and the tempura is bigger than the average compared to the usual fast-food tempura. The crunchy batter is almost void of the taste of flour, with only a hint of buttery taste, but doesn’t overpower the delicious seafood it covers. Beloved also loved the batter, and took most of the crunchy stuff that’s fallen on the plate. 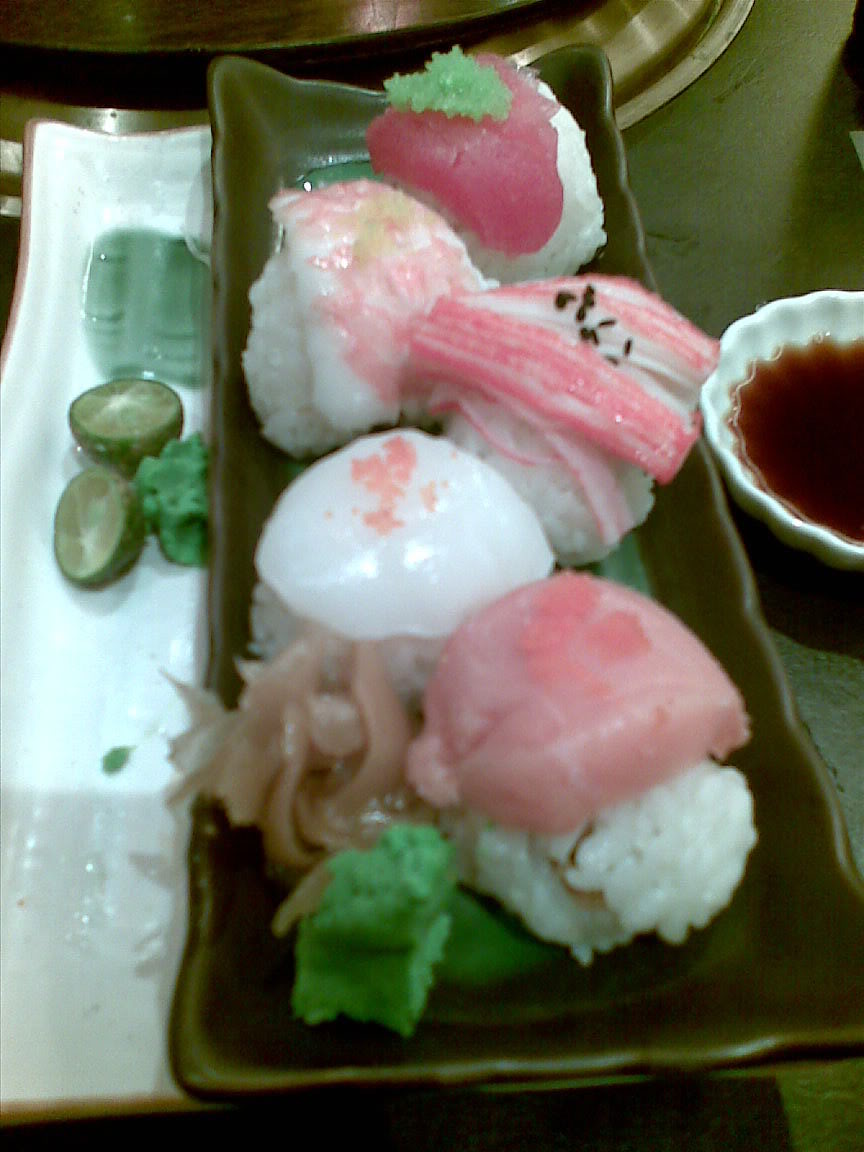 To quench our thirsts, we ordered their refillable Iced Green Tea and Lemon Iced Tea both at 60 Php each. The last time we ate, we also ordered their Temari Sushi, which are ball-shaped sushi topped with different seafoods with a surprise inside. Sadly, we didn’t have the appetite nor the budget to order this time. The one pictured above was from the other time we went.

To summarize, while this may not be the best Japanese ramen/udon restaurant in the metro I’ve tasted, but it is the best tempura I’ve had in the metro. I’ve yet to try the “grill” portion of the store, but there’s always a next time.

Not recommended for: Tempura and Japanese food haters.

Smart nomnomnom tip: If you’re not going to order their tempura or use their grill, maybe you shouldn’t bother going here.