Beloved and I had dinner at Omakase tonight. We don’t know of this resto, and just Googled it up with Tomas Morato restaurants. This was the second top rated entry at the “I’m feeling lucky” site, so we decided to go there for the heck of it… or maybe after looking through the menu and seeing cold noodles there and beloved was craving for it. Anyway…

Obviously, beloved ordered cold noodles for herself—Hiyashi Udon (175 Php). I had a hard time ordering since there’s a lot of stuff in the menu. I could tell, however, that they specialize in maki, or sushi rolls, since a couple of their pages are dedicated to it, and there’s a couple of dozen different variations in these pages. They even have three different samplers of three different rolls. Along with that, they also have a decent selection of nigiri (hand-pressed, the usual kind) sushi, temaki (cone-shaped) sushi, and sashimi, with samplers as well. After a hard time deciding, I settled for their Rising Sun maki (200 Php). I also ordered cold noodles, Zaru Soba (185 Php), for myself. For drinks, we ordered bottomless iced tea priced at 55 Php each. 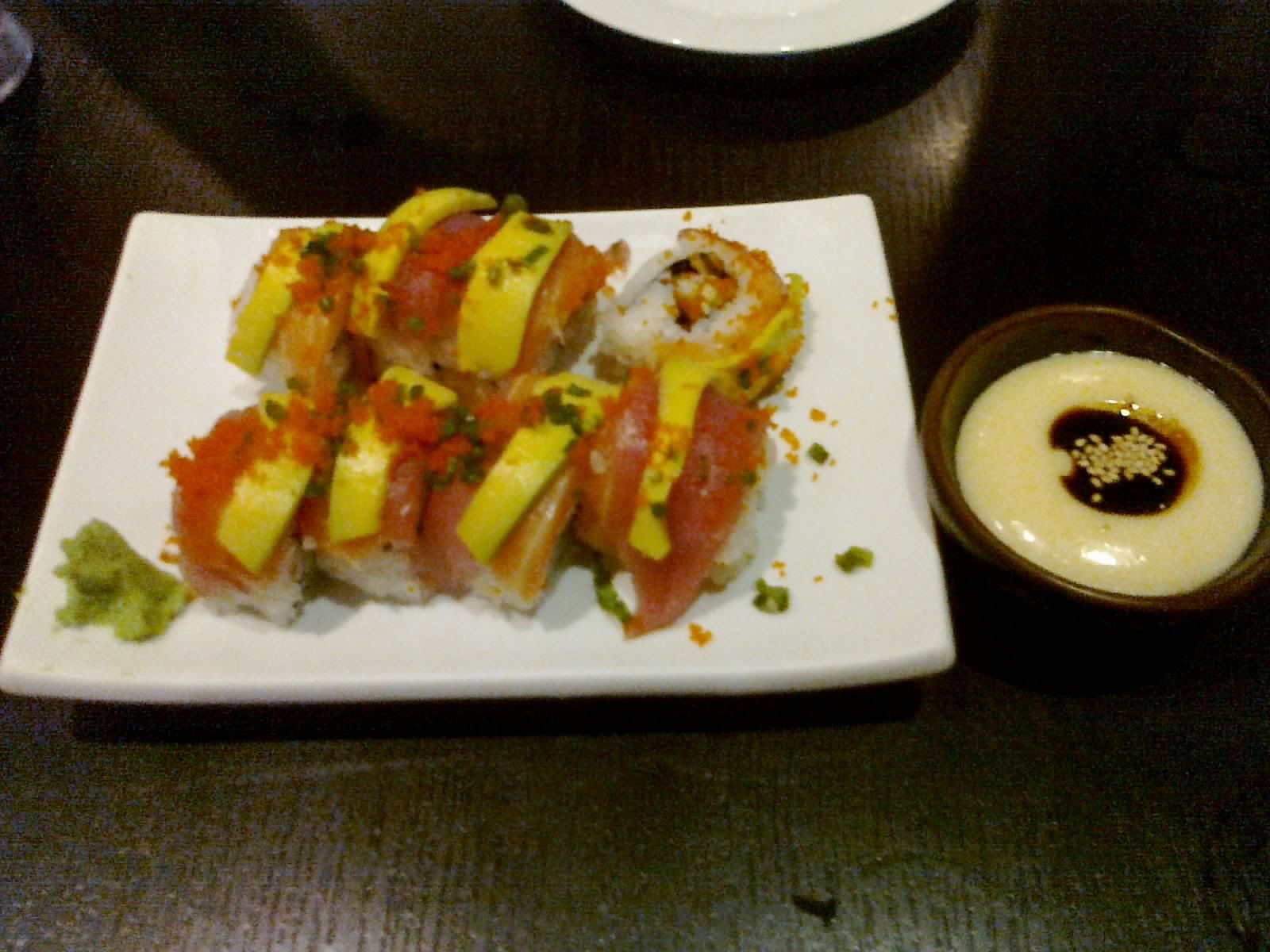 The Rising Sun came first. It was a pretty plate of eight decently sized pieces. It had the raw fish, both tuna and salmon, on the outside of the roll topped with a slice of avocado and roe. Inside the roll was crabmeat and cucumber. It also came with a sauce, a non-eggy tasting mayonnaise topped with sweet teriyaki-sesame sauce. 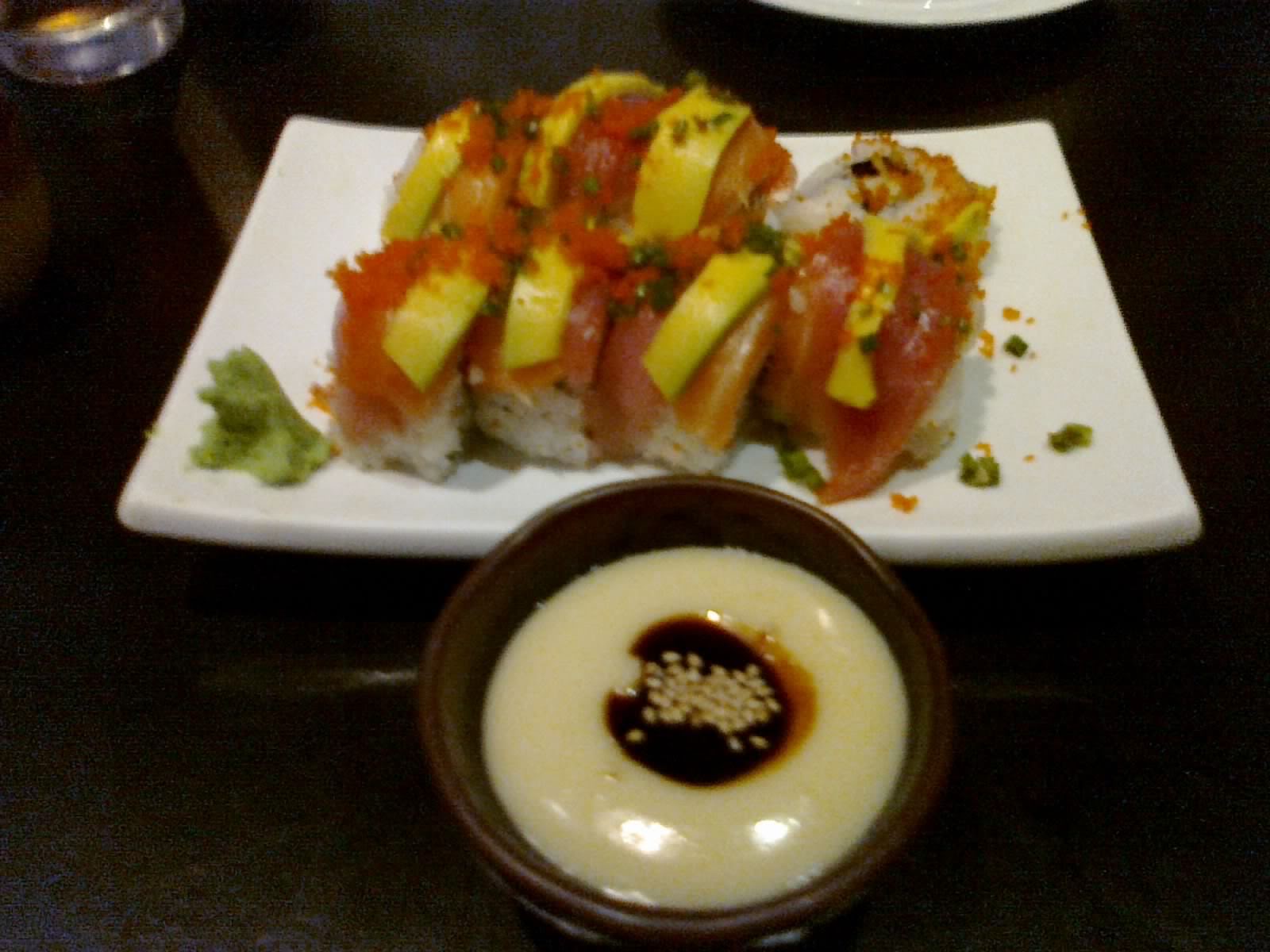 I first tried it out without the sauce… and it was divine. It’s pretty hard to describe, but you can basically taste all the individual pieces, and at the same time, the entire roll as a whole. It’s a medley of assorted tastes and textures that just works. I could taste the mildly sweet avocado, the chewy raw fish, the soft rice, the crunchy cucumber, the hint of crab, and even the poppy roe and the seaweed that binds it all together. With the sauce, it’s even better. It binds the tastes together in a deliciously sweet and slightly tangy package. Each piece leaves a happy aftertaste in my mouth—it’s that good. 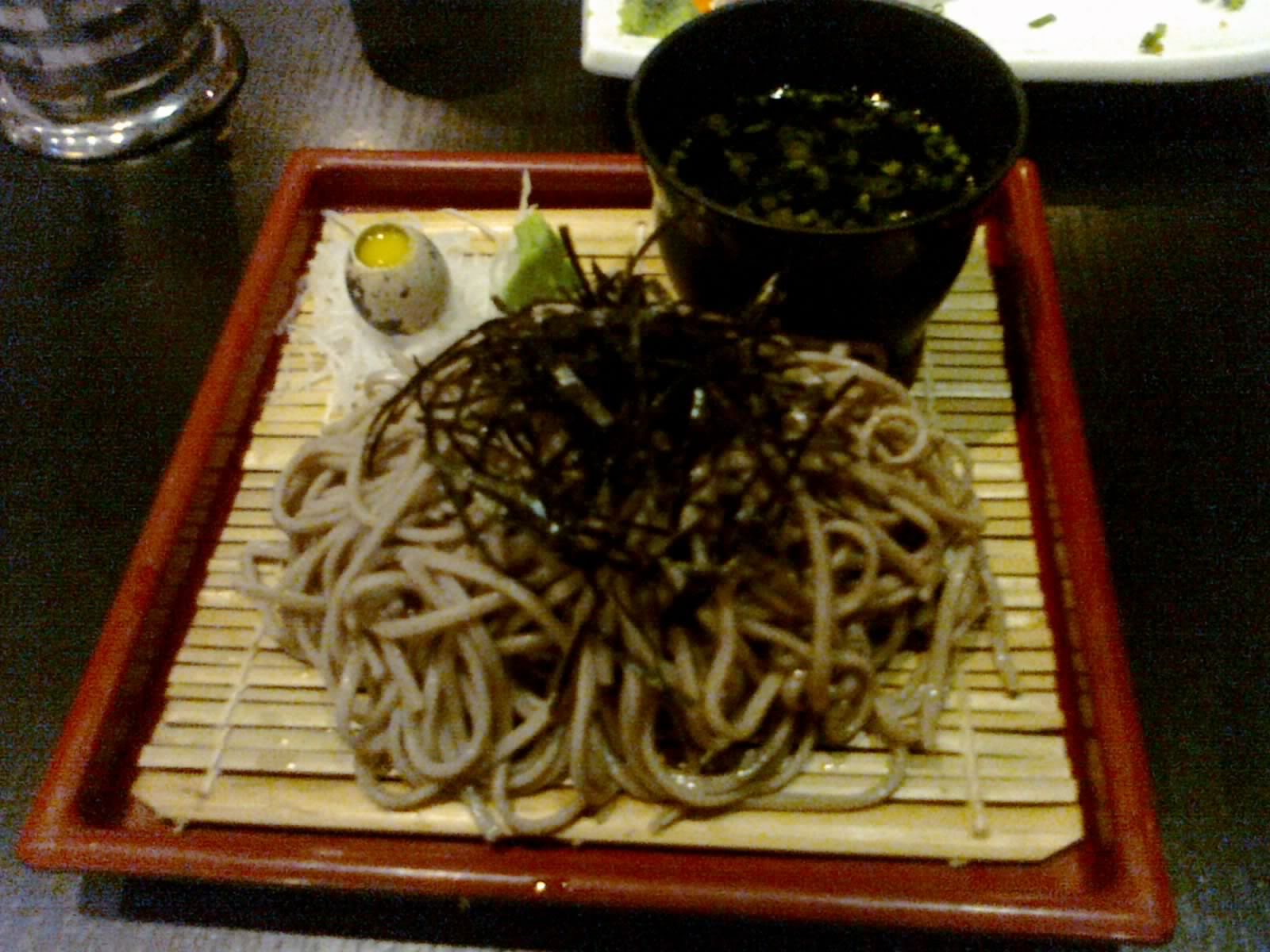 My cold noodles came next. And mine’s the plain one—a simple serving of buckwheat noodles topped with shredded seaweed served with a dipping sauce. The noodles are quite cold, but I could taste all the goodness of the noodles in every… uhm… noodle. The sauce was simple as well, just a mild, cold sauce with a slightly hint of soy. There was also a cracked raw quail egg at the side, which I don’t know what purpose serves. I tried mixing it with the sauce, but it didn’t really mix, and didn’t really add to the taste. That aside, this was a nice simple complement to the complex roll. 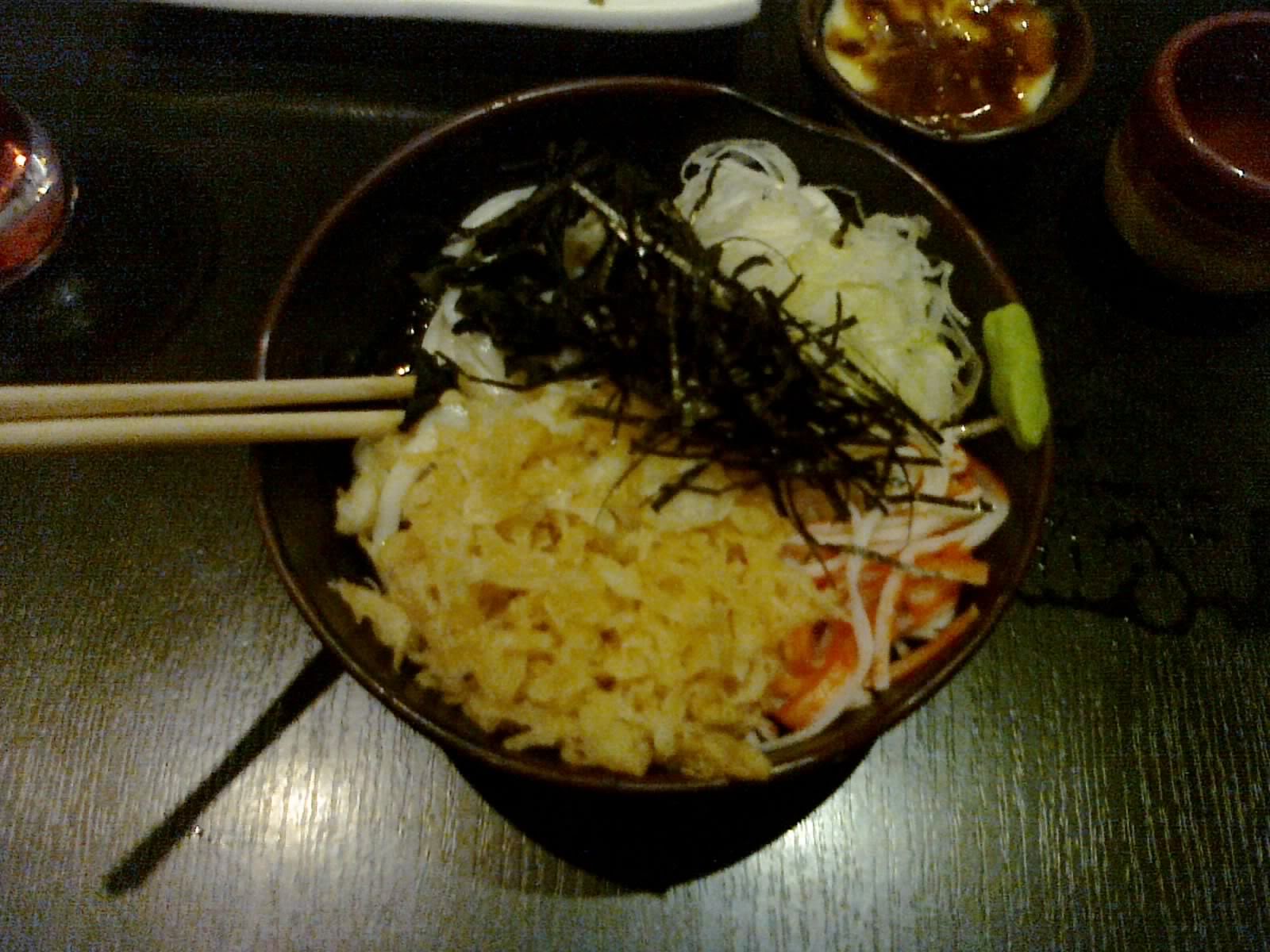 Beloved’s noodles were simple as well. The main difference was her noodles weren’t thin buckwheat ones but were thick udon. Also, it had strips of crabmeat, spring onions, and crunchy tempura batter. The sauce was at the bottom and not a dipping-style like me, but it was also cold, and I can tell this satisfied her cravings. I only tasted the noodles, which were good, and the tempura batter, which was very good. Because of that, I want to try out their tempura myself. 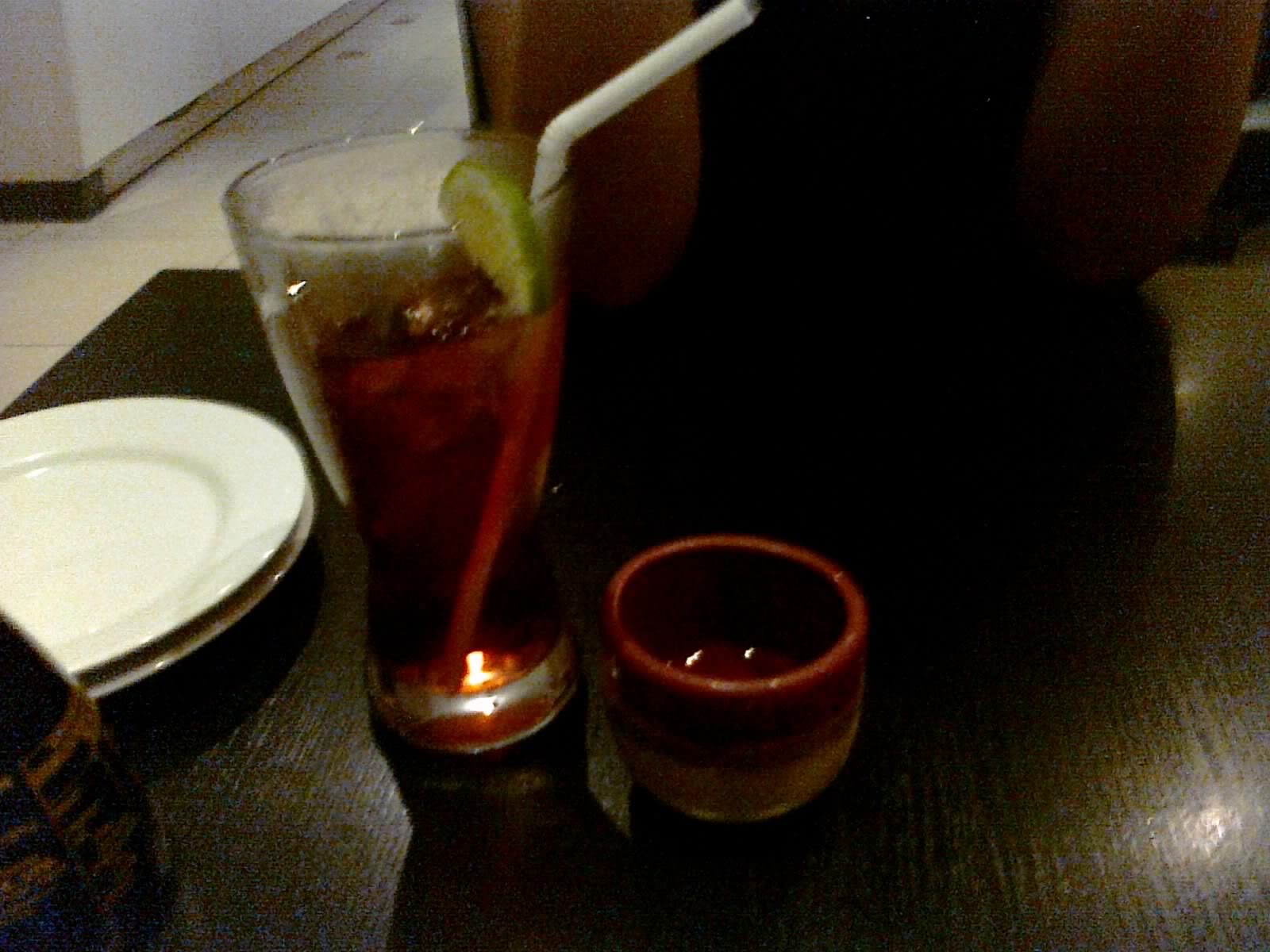 Aside from our drinks, we also asked for some hot tea, which, apparently, is free of charge, but you have to ask them for it. While our cold drinks were your usual ones, their hot tea was soothingly good.

In the end, I learned that my suspicions were correct. This really was a restaurant that specializes in maki. I was quite surprised how the seemingly weird sushi roll that we tried out turned out to look good and taste even better. This is perhaps the best one I’ve tried in the metro. I’d also rank this quite high on the Japanese restaurants I’ve tried here, if not at the top. Perhaps the only drawback is that they don’t have ramen in their menu. Aside from that complaint, I’m sure to return here again to try out their other sushi rolls—with a perfectly-priced tag, it’s difficult not to.

Not recommended for: Ramen cravers.