A couple of days ago, beloved and I had breakfast at The Breakfast Club. Contrary to its name, it’s not really a club where membership is required to enter. We just randomly Googled this one up since we were hungry, it was morning, and we didn’t want to eat at McDonald’s. We also had no idea of its location, but it was somewhere at Katipunan Ave.. We thought it was in the inner streets, since I’ve never seen it before even though I pass by the avenue pretty often. Apparently, it’s located at the former place of Racks, nearby Bo’s Coffee. We had doubts at first, since the hallway leading to it was pretty obscured. Also, when we got up, the sign said it was an Xbox rental place. However, upon entering, we realized The Breakfast Club was just a part of this.

Their menu is filled with breakfast favorites, both Western and Filipino. Aside from their waffles, everything basically had egg in them. However, none of their items come cheap, as in below 100 Php which is perhaps a threshold of what I’ll pay for breakfast. But we tried it out anyway, seeing that the only other table that ordered had huge plates and servings. I already knew what I was ordering when I saw the menu, and that was their Gamer’s Special (140 Php). It comes with your choice of ham, sausage, or bacon. If you still need to ask what kind I ordered, I suggest reading my other posts. Beloved wanted to order their steak, but apparently they were out of it. Instead, she ordered their Cheesy Mushroom Omelette (140 Php). We also ordered their Waffle (120 Php), without any fruits on top. Our drinks were Sola Iced Tea (40 Php). 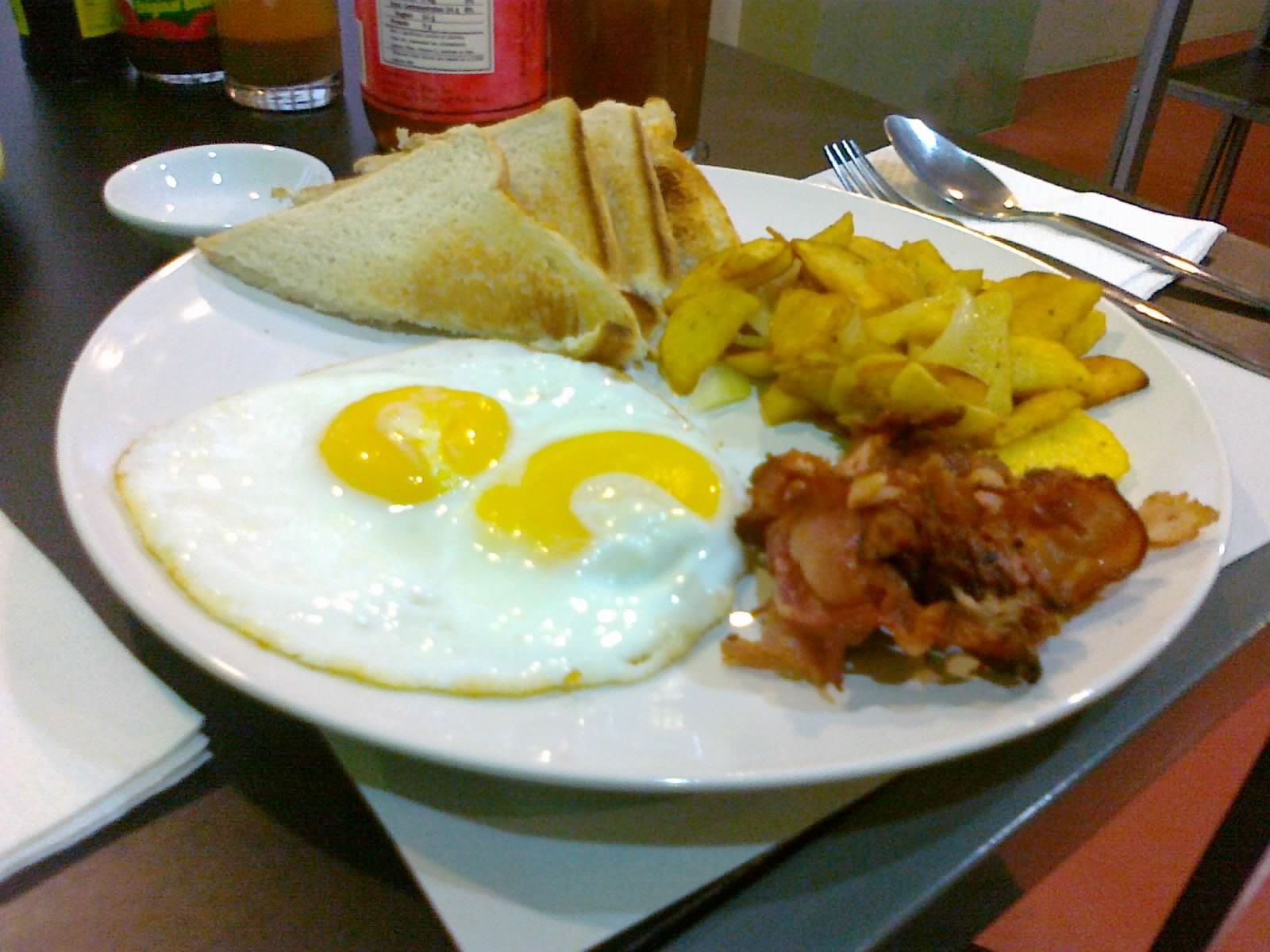 Our order came all at once. I’ll start with mine. My plate had my choice of meat, two eggs, four slices of toast, and their “fries”. I was quite disappointed at the amount of bacon. It was still delicious as bacon is though. I was also disappointed with their fries. It’s not really the crunchy-exterior-fluffy-interior french fries that I love. They’re basically potatoes sauteed in onions. However the quantities of the toast, egg, and potatoes were enough to be called breakfast. 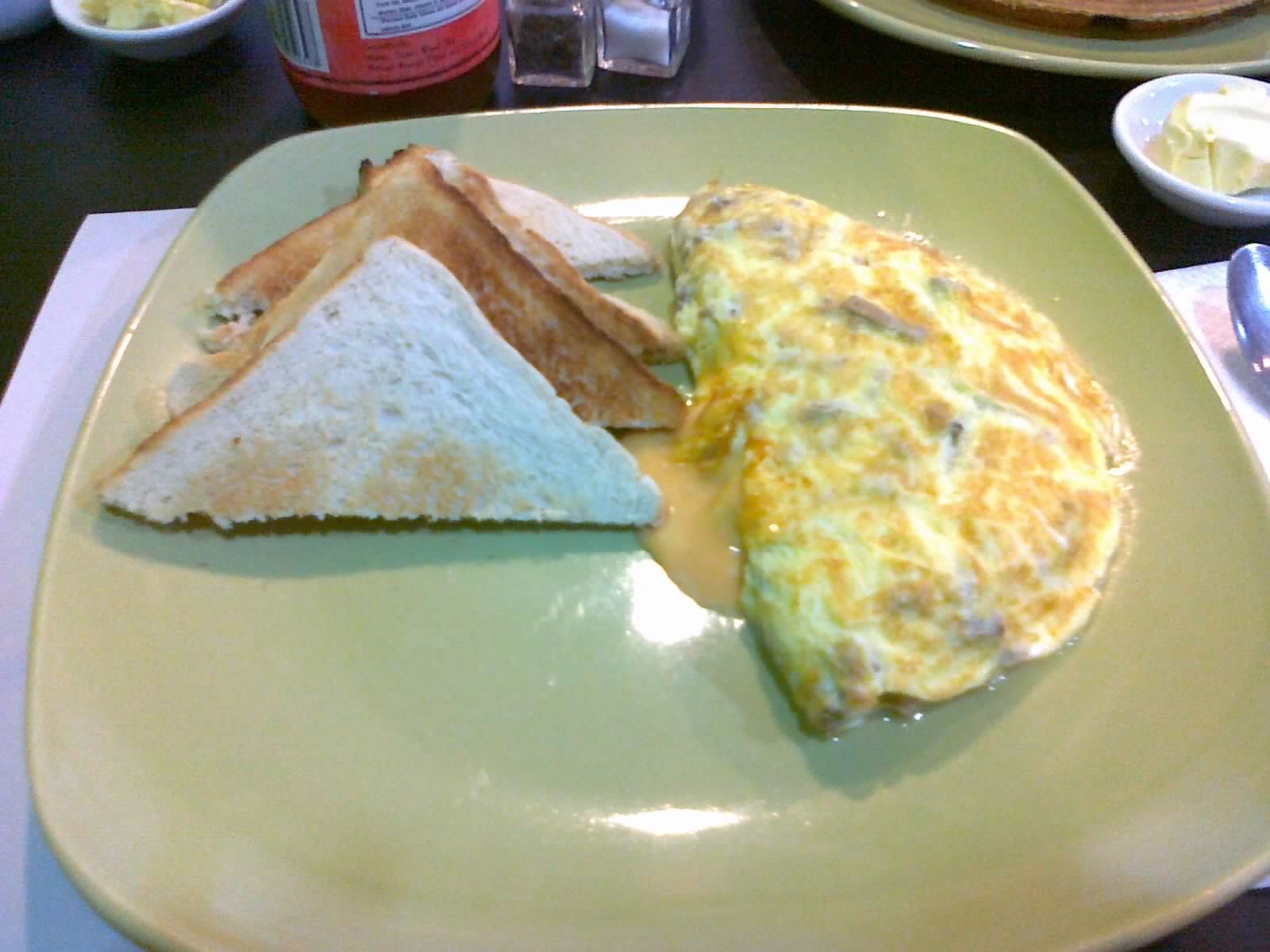 Beloved’s plate came with the omelette and four slices of toast. It was quite delicious and hefty, with delicious mushrooms and the melted cheese oozing out of the egg. No complaints here, except for my general complaint that this is 40 Php more expensive than what I would pay for. 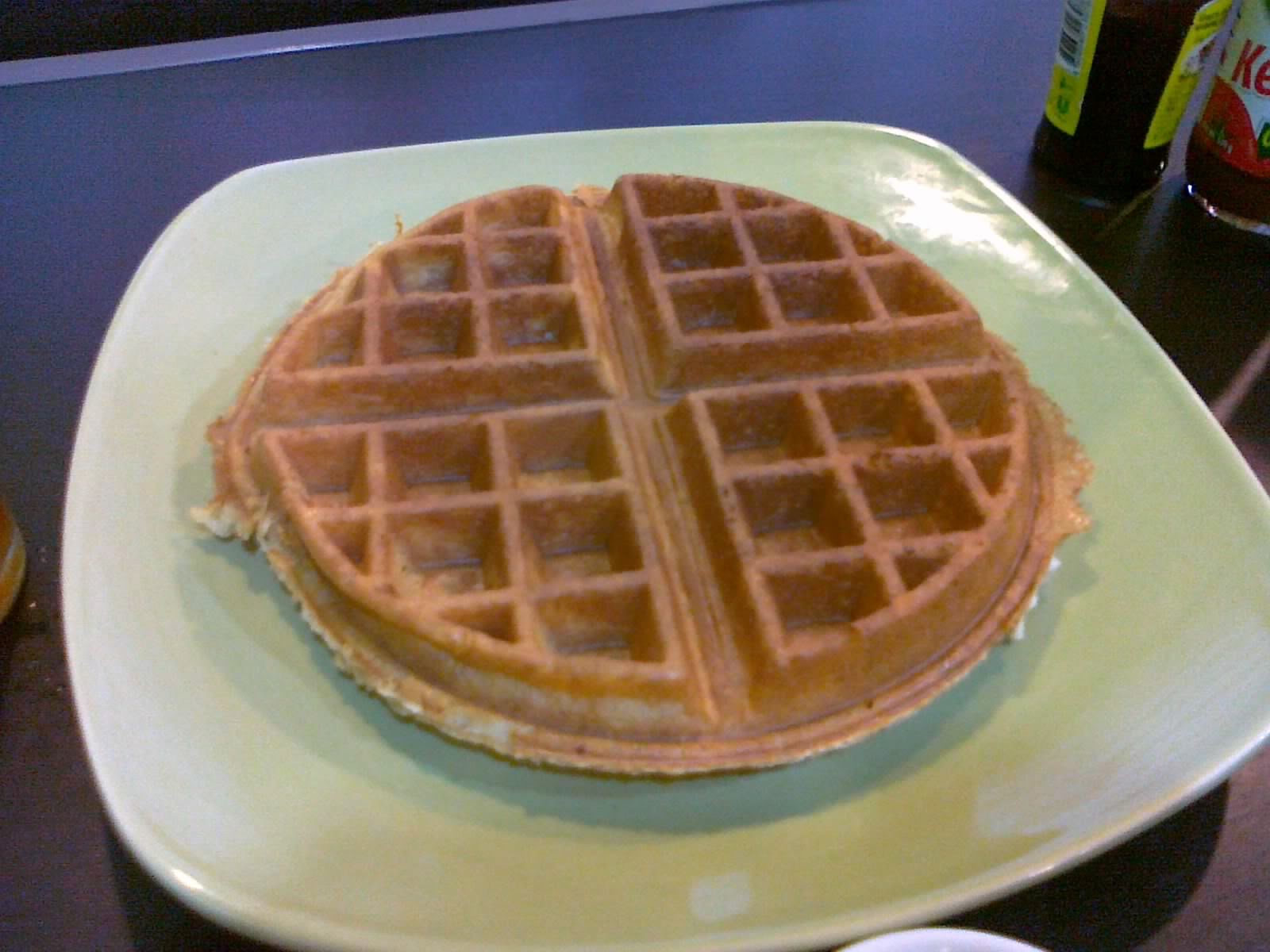 The waffle was a waffle, no frills. However, most of the waffles I’ve ordered in other places save Starbucks turn out to be disappointing—not having the crunchy texture that separates waffle from pancake. This one wasn’t a disappointment. Even though slicing through it seemed like it was disappointingly soft, the crust prove to have the crisp, crunchy texture that I love. The insides were soft and fluffy. The taste… well… it’s up to the syrup and/or butter.

Other than the amount of bacon, there was nothing wrong with the food of The Breakfast Club. However, for food that you can and should be able to cook by yourself at home, provided you have the ingredients and a waffle iron, at a much cheaper cost, their prices didn’t really agree with me. I’ll pay 3⁄4’s of what we paid at maximum, and I’ll be satisfied. If they slash their prices by half, I’ll frequent this place a lot. If you’re lazy and want to have a real breakfast and is in the area and has money to spare, The Breakfast Club is worth a visit, provided it’s between 7 am and 12 noon.

Not recommended for: The impoverished.

Smart nomnomnom tip: You can have them cook your eggs the way you want to.