Yesterday, beloved and I ate at Bigoli while doing my errands. It certainly wasn’t the first time we went here. In fact, this is one of the most frequent places we eat at in Trinoma. Not that I fancy Italian food that much, which is what Bigoli specializes in. And even for an Italian place, it’s not among my favorites. However, for the fact that they offer unlimited bread sticks and bottomless drinks for a very affordable price just makes it somewhat impossible to just shun this one away. Beloved also likes this place due to the fact that they serve cream dory.

Obviously beloved ordered Cream Dory with Italian Rice (130 Php). As for me, I wasn’t really feeling for pasta, and I usually order their pesto just for their bread sticks. This time, I ordered their Bacon Stromboli (120 Php) because it’s been a while since I had bacon and I was feeling bacon deprived. I also ordered a slice of their Shrimp Bianca Pizza (85 Php), which I always get after discovering it with whatever others I order. Of course, we also ordered their Bottomless Drinks (55 Php). No sharing! 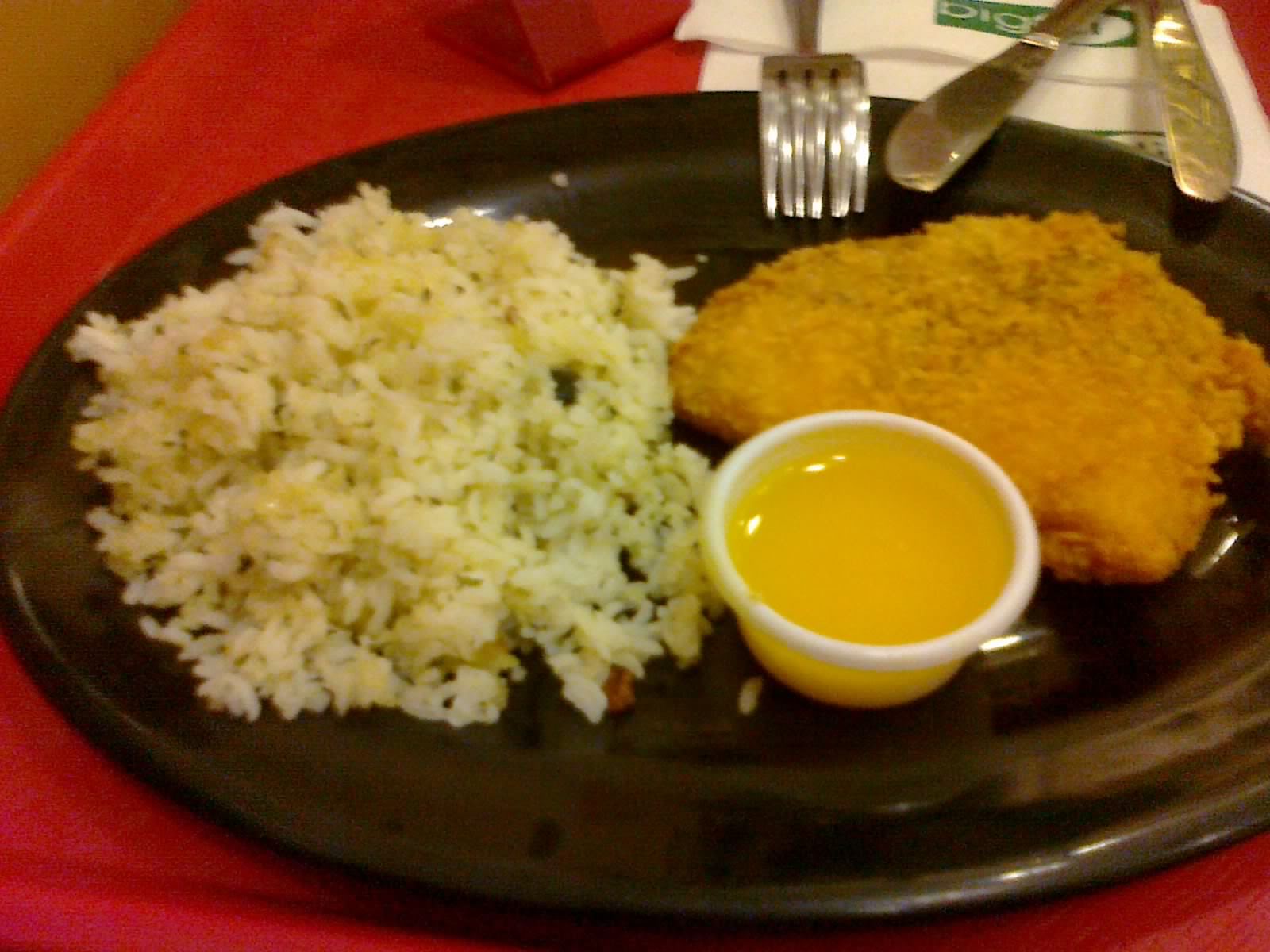 Anyway, after getting our glasses which we filled with our drinks of choice, beloved’s order came shortly after. It’s a generous enough plate, about a cup of rice, and a slice of fried cream dory. It also comes with a melted butter sauce. For me, it tastes just like whatever fried fish cooked that way. The butter doesn’t really add much as well. Not that it’s bad—it’s good enough for its price. The rice makes more than enough for it anyway, as it’s one of the more tastier rice I’ve had. 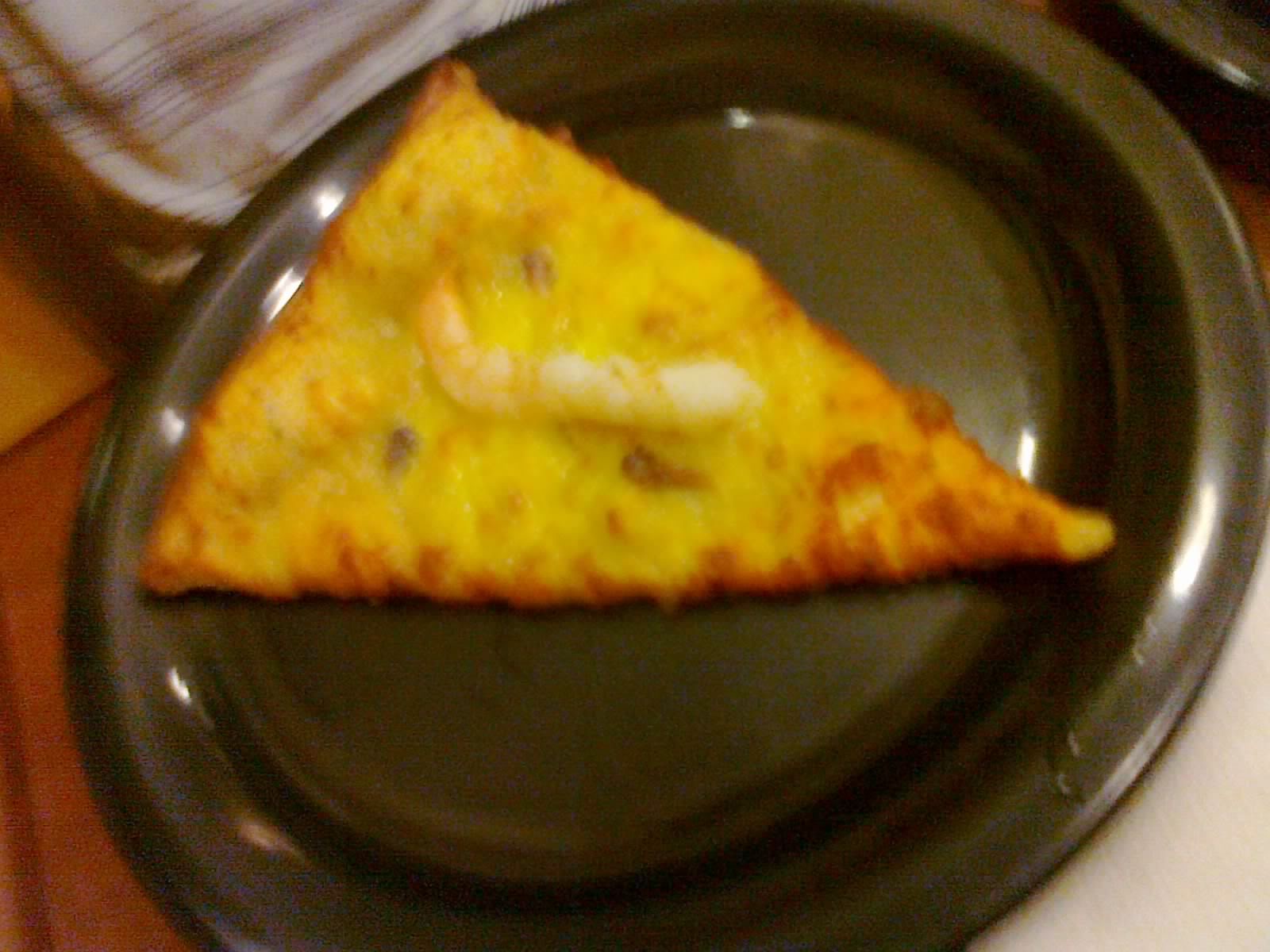 My orders came next. I’ll start with the pizza. Yes, it looks funny. There’s literally one piece of shrimp on the pizza, as if it were just put on lazily after. However, the reason I always order it is; one, I like the taste and texture of the crust: chewy, fluffy, and a treat for bread lovers. Two, I love the taste of the toppings: it has salty anchovies mixed in the cheese, making it a delightful slice for anchovy lovers. Something’s changed this time, though. The crust, while still had its chewy finish, now has a crunchy first bite. It’s still good though. 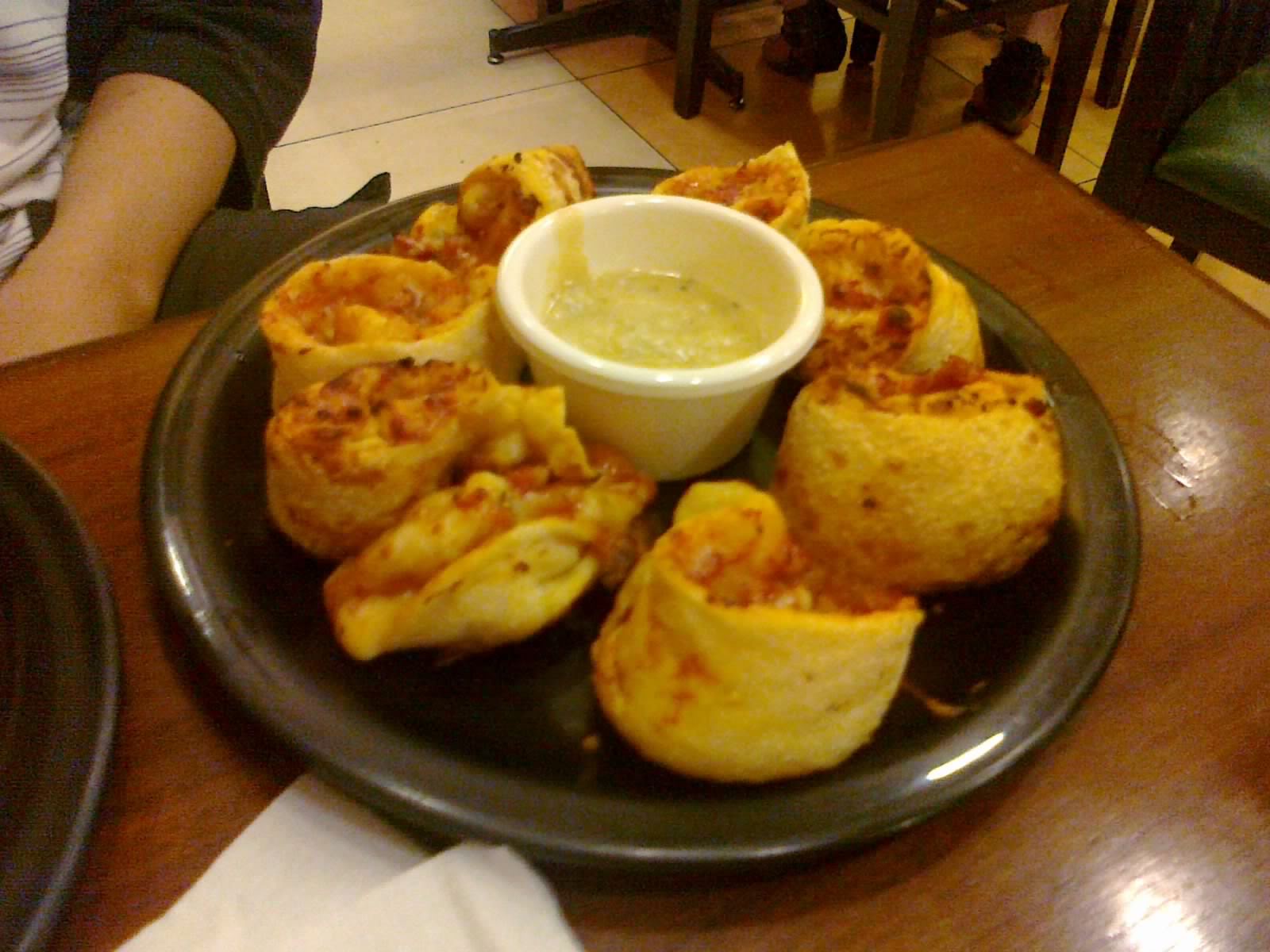 As for the stromboli, well, it’s not the prettiest plate of the lot. The last time I had this, I was sated with juicy bacon and stringy cheese, wrapped in the same bread they bake their pizza in. Sadly, that last time wasn’t recreated on this plate. The bread was all right, and the cheese was there. The bacon, however, was burnt to crisp that it tasted nothing like how bacon should be savored. Maybe it’s just this particular plate that turned bad, but this experience would probably make me not order this plate again for at least a few months or forever.

That aside, Bigoli still proves that it’s all worth it for the unlimited drinks and bread sticks. Although I didn’t get to savor any bread sticks this time because I didn’t order any pasta, their bread sticks are made with the same stuff they make their pizza and stromboli with. Their pizza looks funny and amateurishly made, but really, good pizza isn’t about the toppings, but about the dough. And for 55 Php bottomless drinks, this is certainly a good place to go after you somehow become thirsty in Trinoma, perhaps after a grueling few rounds of Dance Dance Revolution or other strenuous activities within the mall. Oh, and their take on the Italian rice is pretty good for a try as well. It’s a good place for its prices. Just don’t expect too much and hopefully you won’t be disappointed.

Not recommended for: People with exquisite tastes.