If you see the picture below, you might get spoiled, and I assume you’re already spoiled because you’re most likely to look at the picture if you didn’t after I mentioned that. So, no, I didn’t go back to Twistix, but I did find another place that serves these deep-fried potato spirals on a stick. Anyway, while going home yesterday, I passed by Magiting Street at UP Teacher’s Village on the way to Maginhawa. At a somewhat hidden corner beside I Love Froyo, I saw it—a poster of the said genius of a snack. ‘wich kraft, which specializes in sliders and schubligs, apparently also serves this deep-fried potato spiral thingies.

Unlike Twistix, which I assume name their product the same as their… uh… name, ‘wich kraft conveniently names their deep-fried potato spirals on a stick Potatwist. I thought it was a pretty playful name, and because it’s pretty affordable—50 Php for their large, I decided to try it out.

As said, their largest is at 50 Php. They do have small and medium sizes at 30 and 40 Php respectively. Similar to Twistix, they also have some flavors to choose from—cheese, barbecue, sour cream. I decided to forgo the flavorings and just have salt with mine. 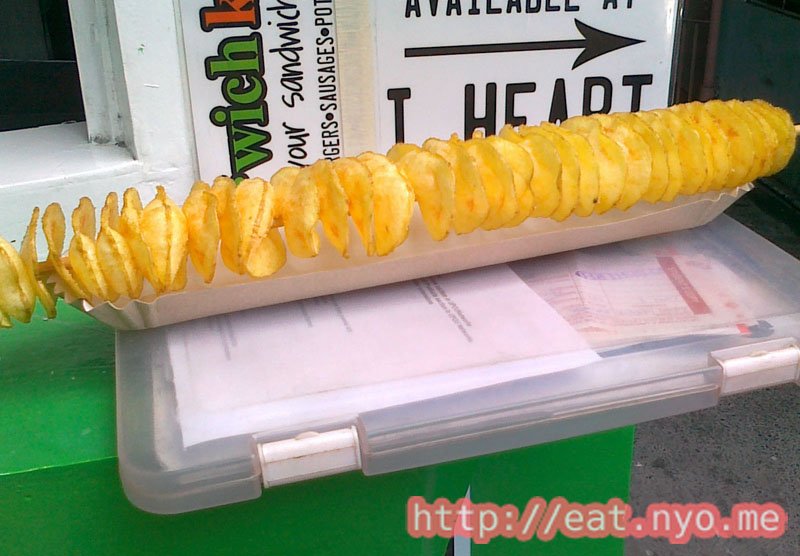 The Potatwist is smaller than Twistix’s deep-fried potato spiral on a stick in girth, but similar in length. I’ll let you digest that for a moment if your mind is dirtier than the norm. For 50 Php, in volume, at least, it was a pretty fair deal if we base it on the previous adventure. However, the servers put too much salt in mine, perhaps not used to this special request, making this particular snack very salty and almost uneatable in some parts.

Honestly, I wasn’t that happy with mine. But I thought it was a better value than its only competition that I know of, if you don’t consider the incorrect amount of salt. I’ll give it a thumbs up for good measure. Also, do note that they probably specialize more in their schubligs and sliders, so this review doesn’t apply to those items, just the potato snack. Next time, though, I’ll make sure to ask them to go easy on the salt.

Recommended for: Deep-fried potato spirals on a stick lovers.

Not recommended for: Deep-fried potato spirals on a stick haters.

Smart nomnomnom tip: Tell them to go easy on the salt.