So, to continue my affordable-foodstuffs-that-deserve-fame-or-notoriety promise, I present another sub-100 Php review. Although affordable, I’m not really certain it’s worth it, but I’ll get to that later. Anyway, I heard from a friend who lives in Cebu that a certain snack item exists here in Manila that he’d want to try out when he visits here. Ironically, I have never heard of said snack item, but when I saw its picture, I immediately asked all my friends if they know where to get it. A friend said that they are sold at Robinsons Galleria, but then Beloved finds out that UST also has these things. Because I had little reason to go to Galleria, I decided to try out the said snack item with Beloved at UST.

I’m not sure if this place has a monopoly of this, which I doubt, but it (the place) was called Twistix. It’s a humble stall located deep within UST’s carpark complex’s ground floor. So what is this said snack item? I’m not sure what it’s called, to be honest, but I called it “potato spiral thingy”, due to the picture friend from Cebu showed me. For convenience, I’ll call it Deep-Fried Potato Spiral on a Stick in this review.

Twistix serves this snack in three sizes. The smallest is 50 Php and the largest 70 Php, with another size in between. They boast that it’s 100% natural potato, and you actually do get to witness it making. Because it’s a long journey for me, me and Beloved ordered the large one to share with. 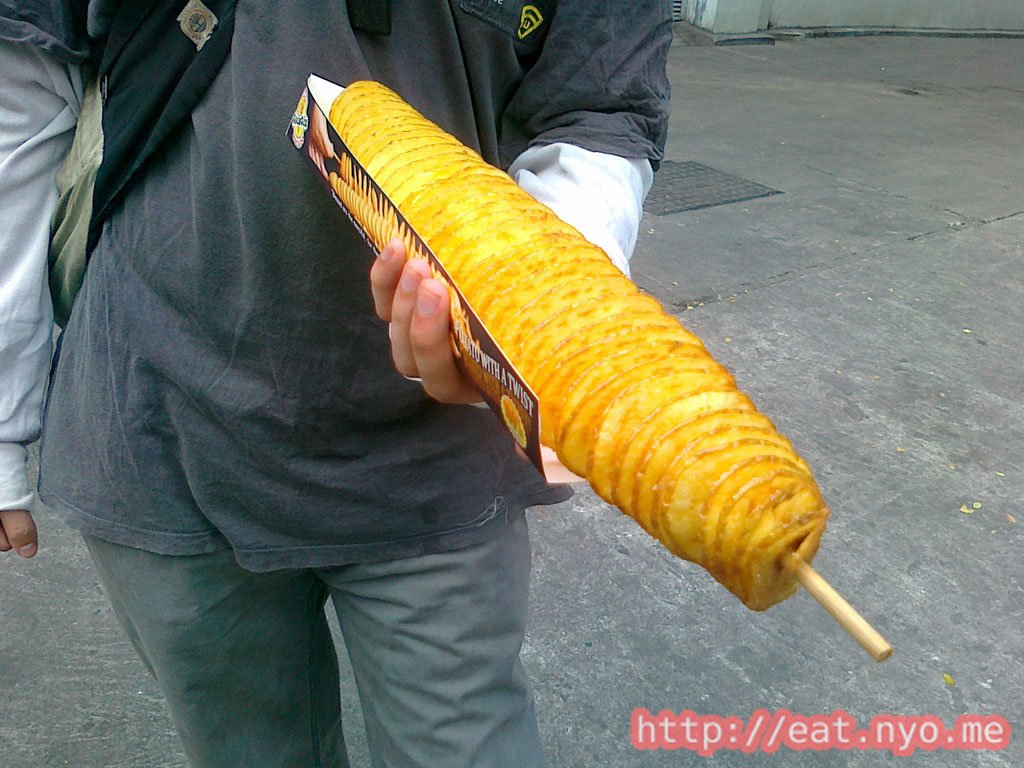 Indeed, the cook took out a pretty large potato, plugged it in a spiral cutter that slices the potato thinly in a continuous spiral, pokes a long bamboo skewer in it, and spreads it out evenly. Then, he deep fries it in oil for a few minutes. He asks us for powdered flavor, but we didn’t fancy any (barbecue, sour cream, pizza, cheese), so we just asked for salt on our Deep-Fried Potato Spiral on a Stick. And it’s a pretty long stick, almost as long as my arm. 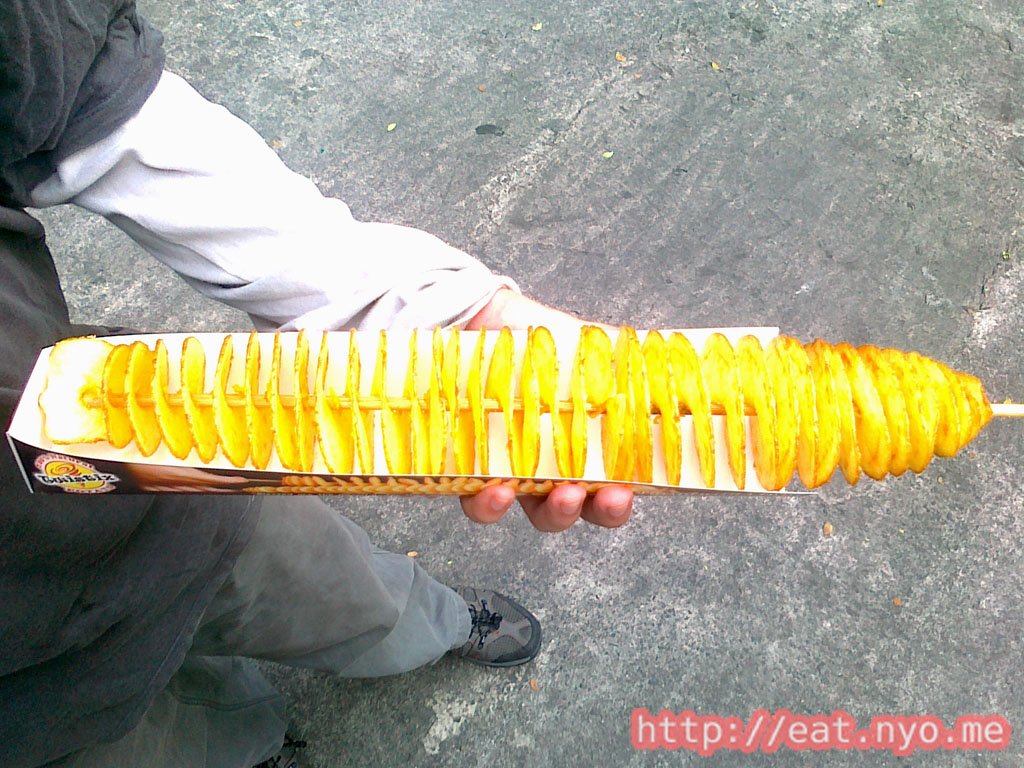 Was it worth it? To be honest, it’s pretty much like your usual potato chips, only presented in a unique and fun way. We ate it by breaking it off the stick, which the now crunchy potato yields to quite easily. Of course, being deep-fried, it’s tad oilier than your usual bag of Lay’s. Also, they weren’t as paper-thin as most potato chips in the market, so I guess that’s a plus.

However, was a large, deep-fried, spiral-cut potato on a stick worth the 70 Php? I don’t really know. It didn’t fill me up as much as a ~60 Php order of fries from your usual fast food. Also, a single potato, although large, seems to be a hard justification for its 70 Php price tag. Also, I’m biased being a potato lover myself, so I really did enjoy it, although I’ll admit I wanted more after finishing it. Was Twistix worth the try? Certainly. But I’ll probably appreciate it much, much more if they lower the tag. But, hey, it’s cheaper than your bag of Lay’s, and maybe a bit healthier too (sodium-content and preservative-wise).

Recommended for: Potato lovers in the area.

Not recommended for: Potato haters not in the area.

Smart nomnomnom tip: It comes in a few flavors, but, for me, plain old salt works best for potatoes.