Beloved and I had dinner at Mr. Miyagi last night. Similar to YakiMIX and Sambo Kojin, this relatively new yakiniku place is an eat-all-you-can smokeless grill and buffet. The place opened up at Timog Ave. late last year. Since they are priced similarly to their competition, we decided to try it out to see how they differ.

As I’ve mentioned, they are priced similarly to YakiMIX and Sambo Kojin at 599 Php for their Eat-All-You-Can Smokeless Grill and Buffet for a weekday dinner. For weekends and holidays, it is priced at 649 Php and for weekday lunch, it is priced at 499 Php, making the latter the best deal. We also opted to pay an additonal 75 Php each for bottomless drinks—green iced tea for me and plain iced tea for Beloved. After sitting down, we immediately went to their buffet with me having my Yakiniku Buffet Strategy™ in mind to maximize belly space at the best possible pace. 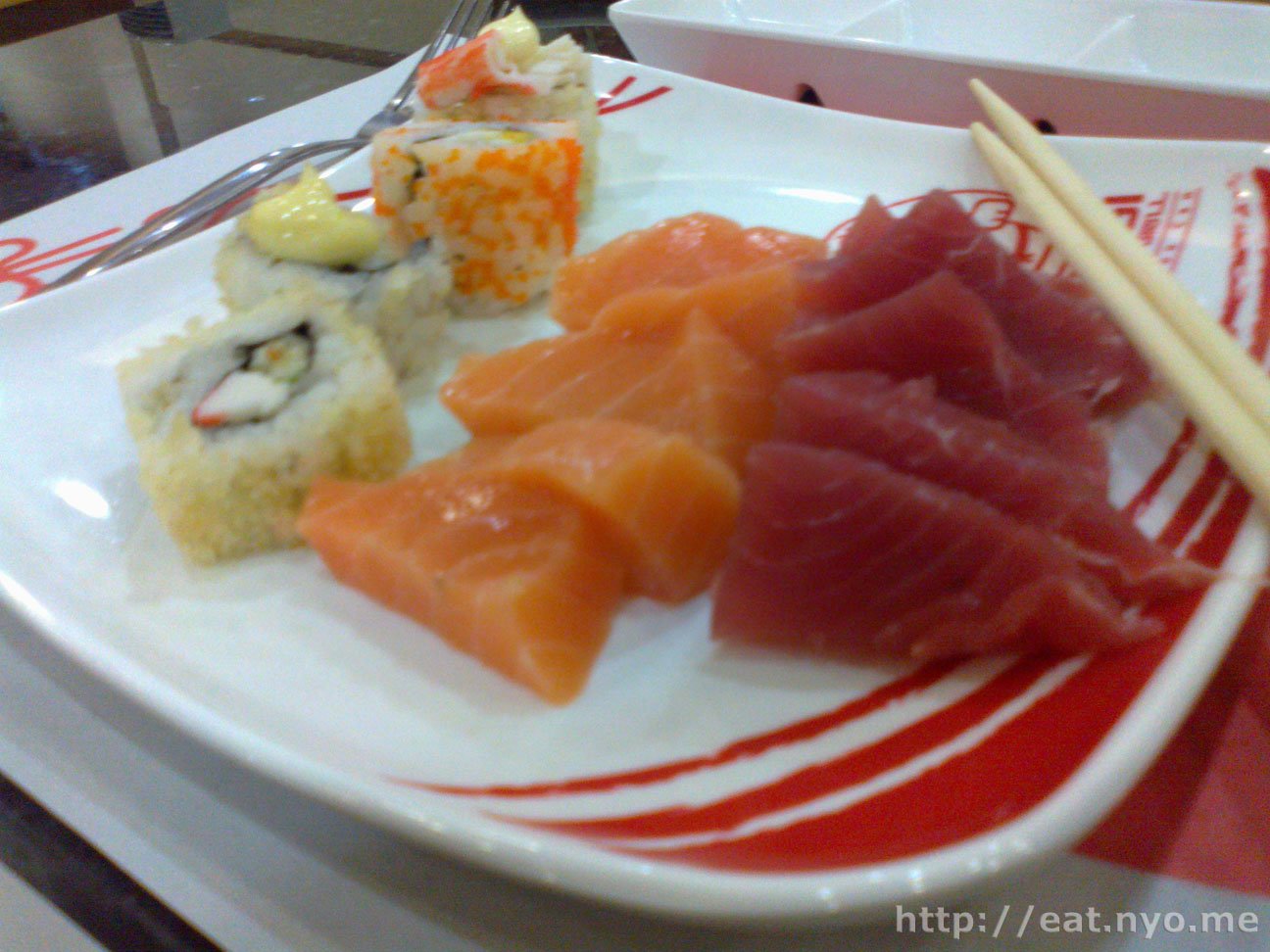 My YBS™ calls to try out their sushi and sashimi first. Their sushi were the basic nigiri sushi and some maki sushi. I sampled four of their maki which differed in toppings and sauces. I didn’t like the rice they used in particular, which felt a bit hard, but I do like how they tasted. I was surprised at first that they didn’t offer any sashimi, but we soon found out that you have to ask the chef to cut them out for you. I tried both salmon and tuna, which, while didn’t have the frozen taste, also didn’t taste as fresh as the best ones I’ve tried. Still, if you’re craving for raw fish like I was, you probably won’t mind. 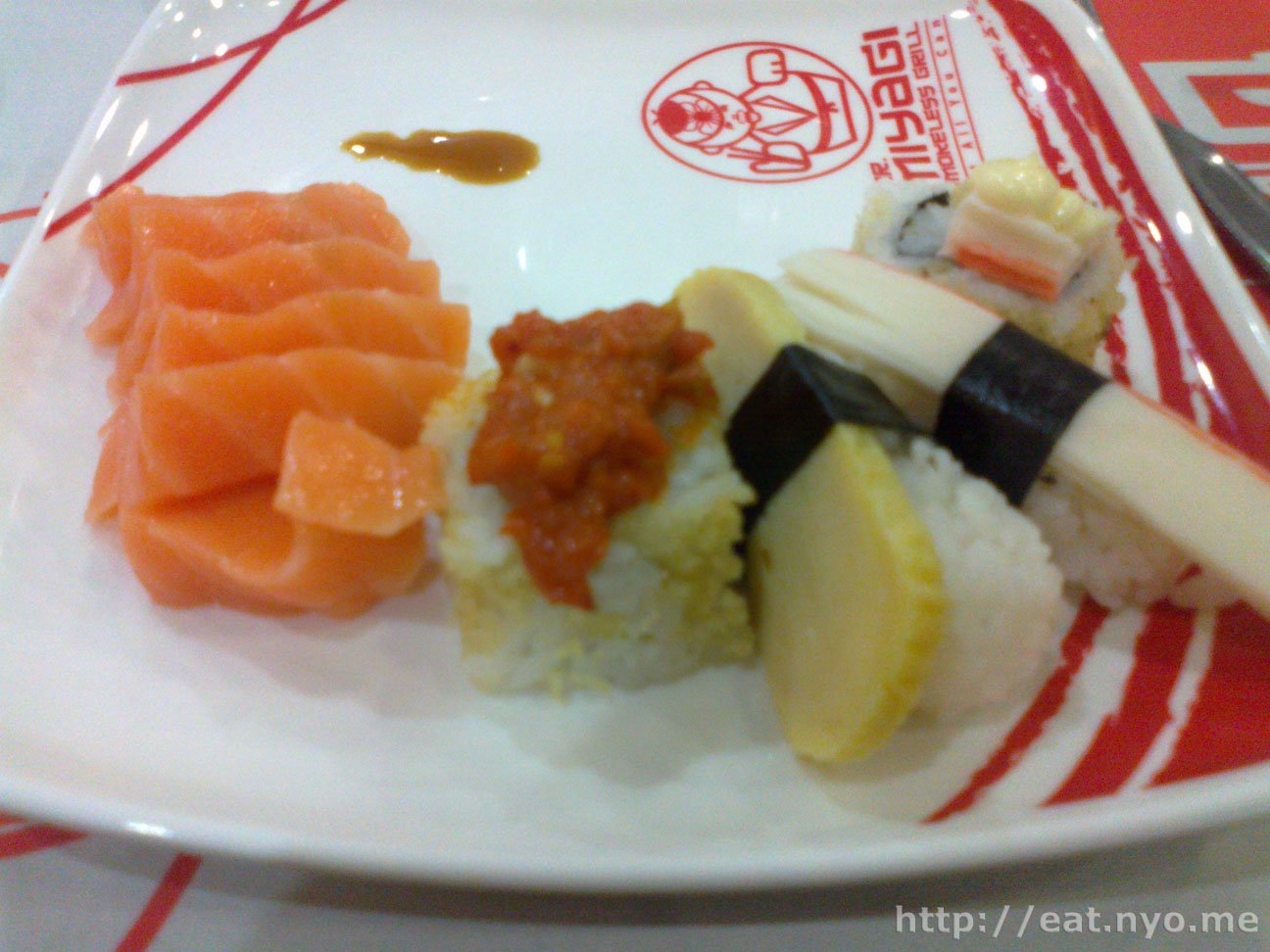 Beloved sampled some of their nigiri and a couple of their maki and some of their salmon sashimi. Beloved took one that had a foreboding looking sauce that I stayed away from. It was the right decision as it turned out to be a spicy roll. 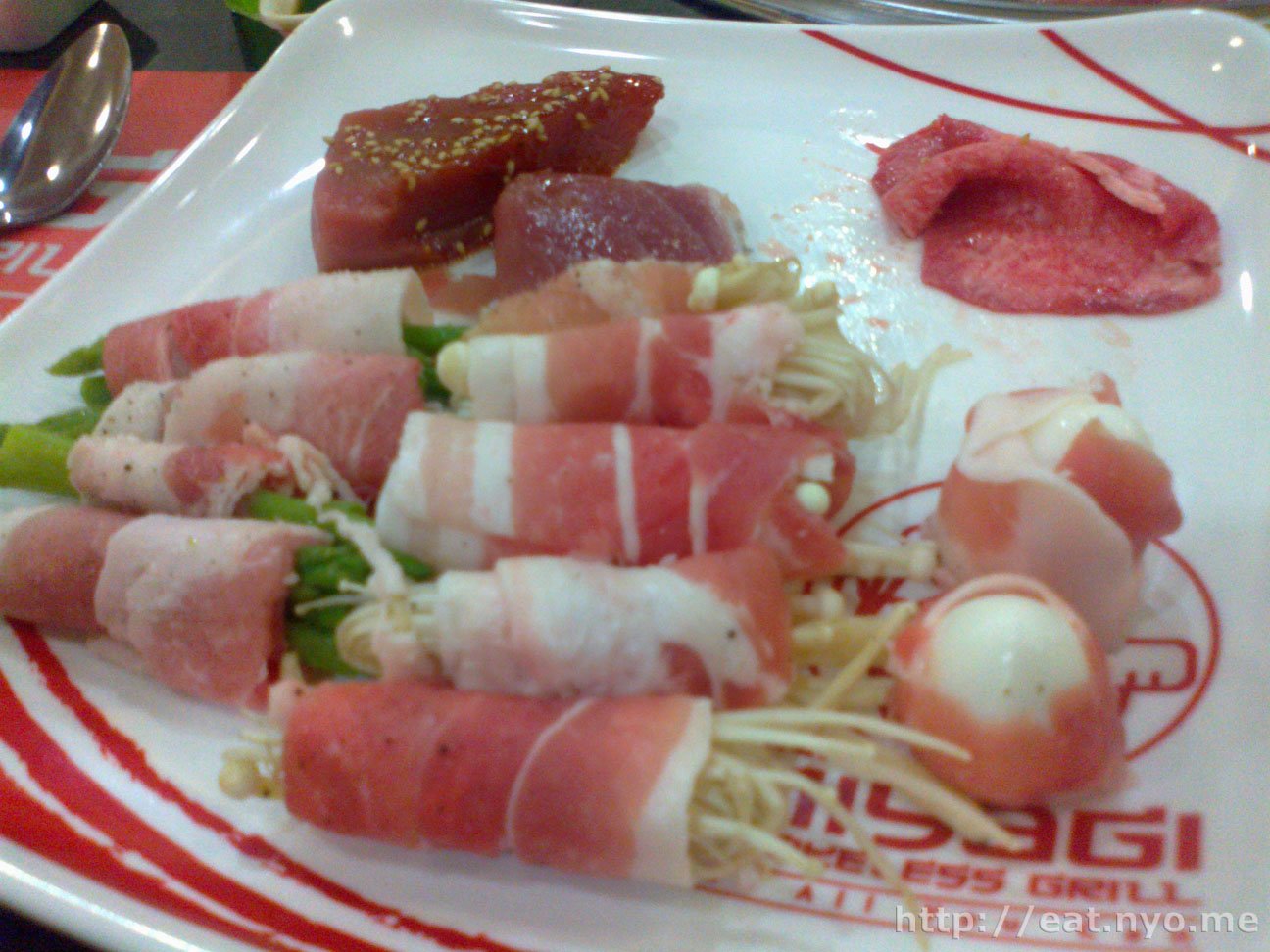 Beloved, who doesn’t know about my YBS™, immediately went for the yakiniku. Similar to YakiMIX, they offer a small selection of bacon-wrapped stuff. The stuff Beloved picked were asparagus, mushrooms, and quail eggs, the last of which she found very funny. She also took a couple of slices of tuna belly and a slice of beef tongue, which she was very happy to find. 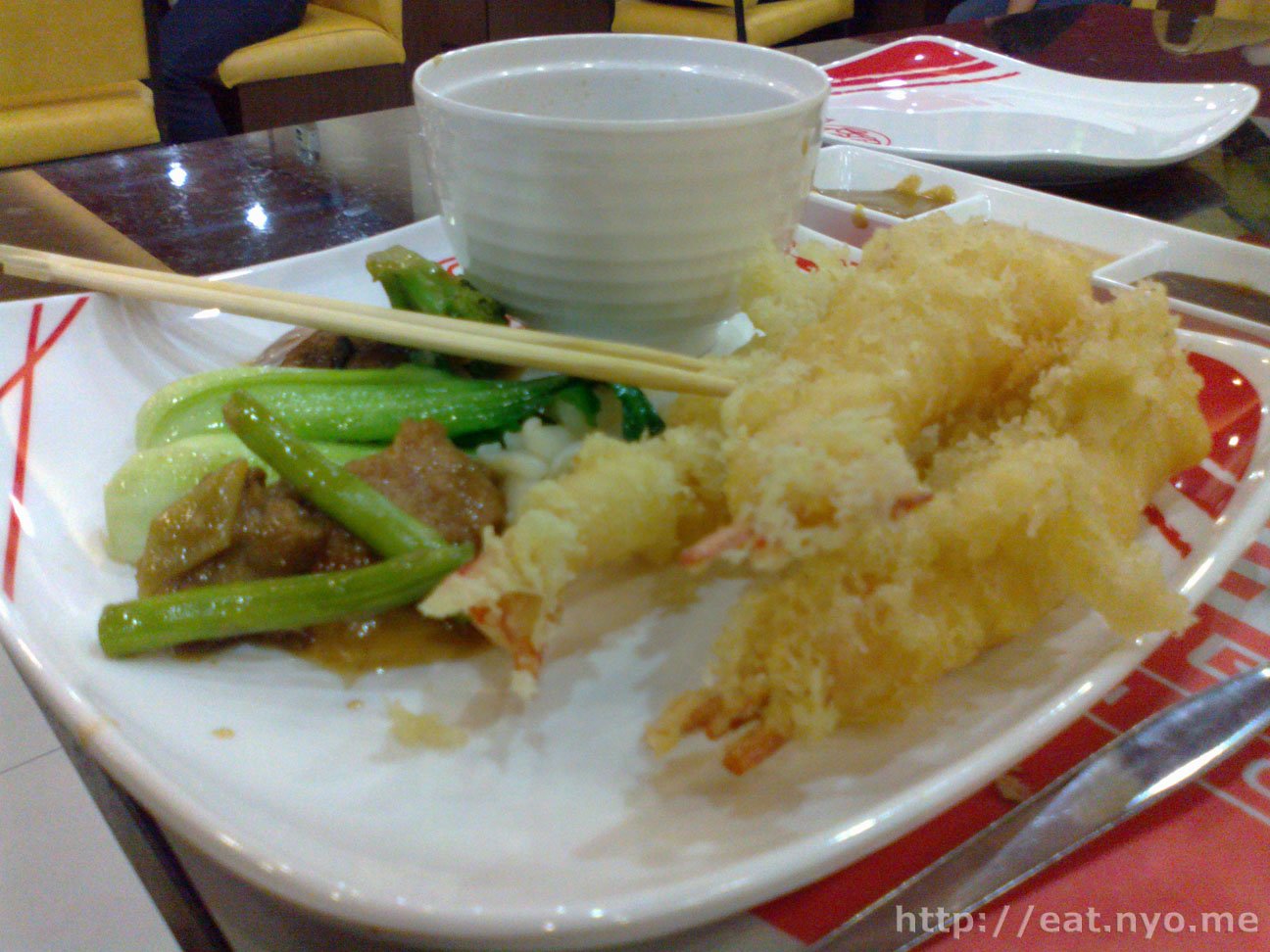 As for me, following my YBS™, I sampled some of their cooked stuff, without rice, of course. I took three pieces of their tempura, some bok choy with squid and beef with mushroom. The tempura I found a bit strange because it tasted very, very mild, as if it didn’t have any taste at all. This goes for both shrimp and batter. In order to enjoy it, the sauce is pretty much required. I did like the size of them, though, which almost rivaled the biggest one I’ve tried in the metro. 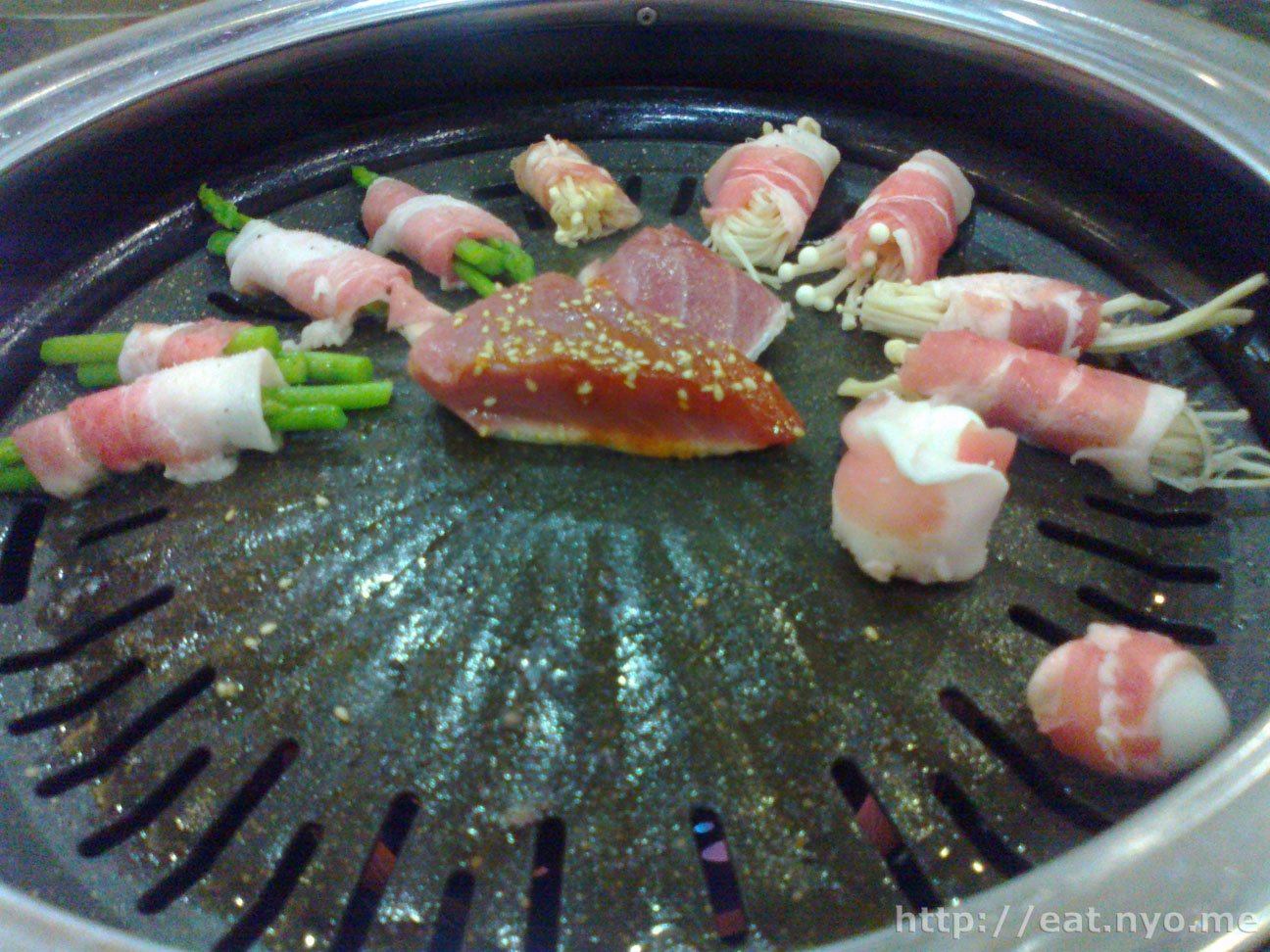 While I was eating my cooked stuff, Beloved started cooking her raw stuff. The beef tongue didn’t take long to cook due to the thickness, or, more appropriately, thinness of the slice. I was a bit worried that the grill started smoking until I realized our server forgot to turn on the fan. 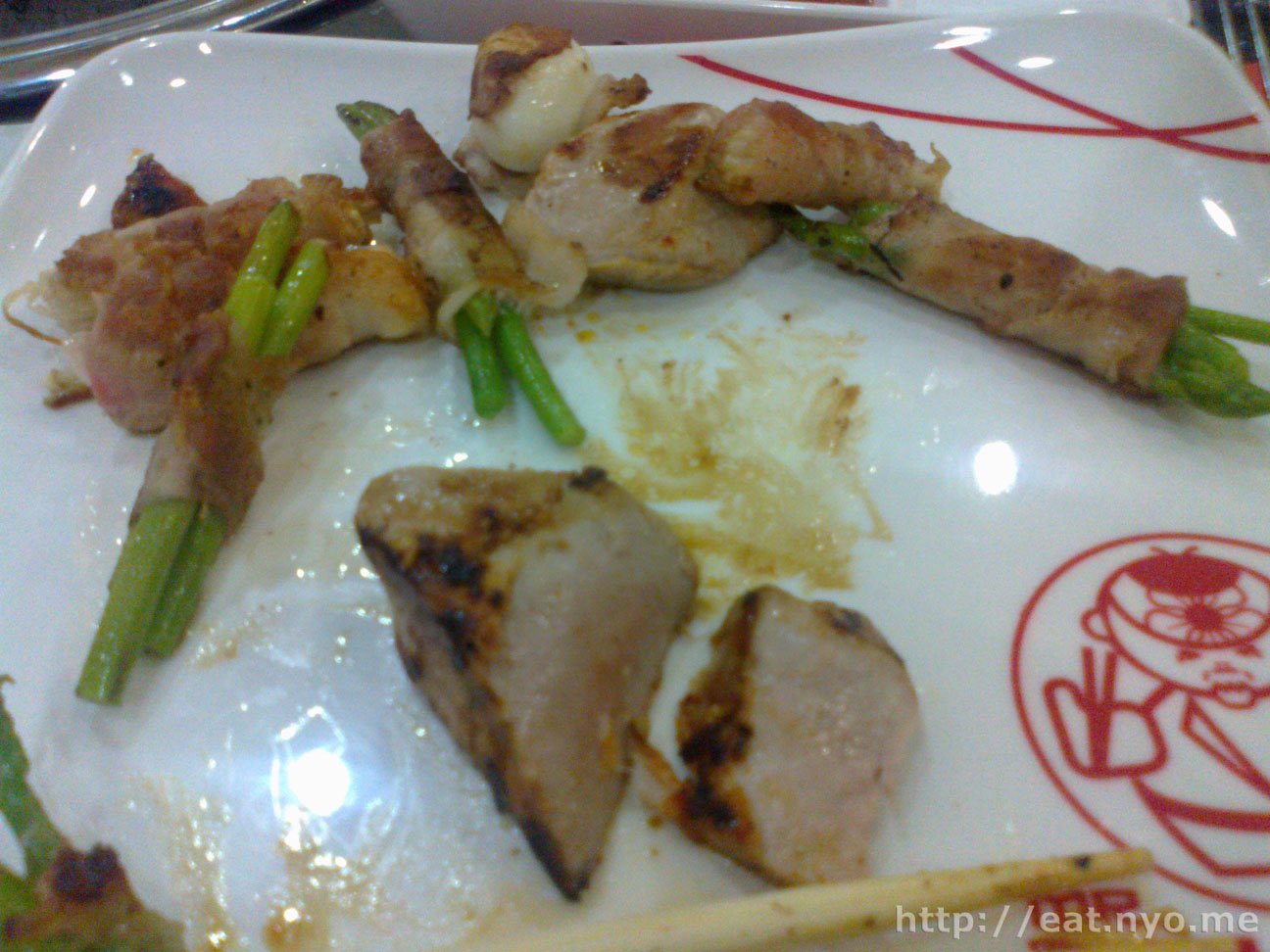 Beloved didn’t have any complaints with the meat. I, however, found them lacking in taste and juiciness. However, the myriad of sauces they have makes up for it. 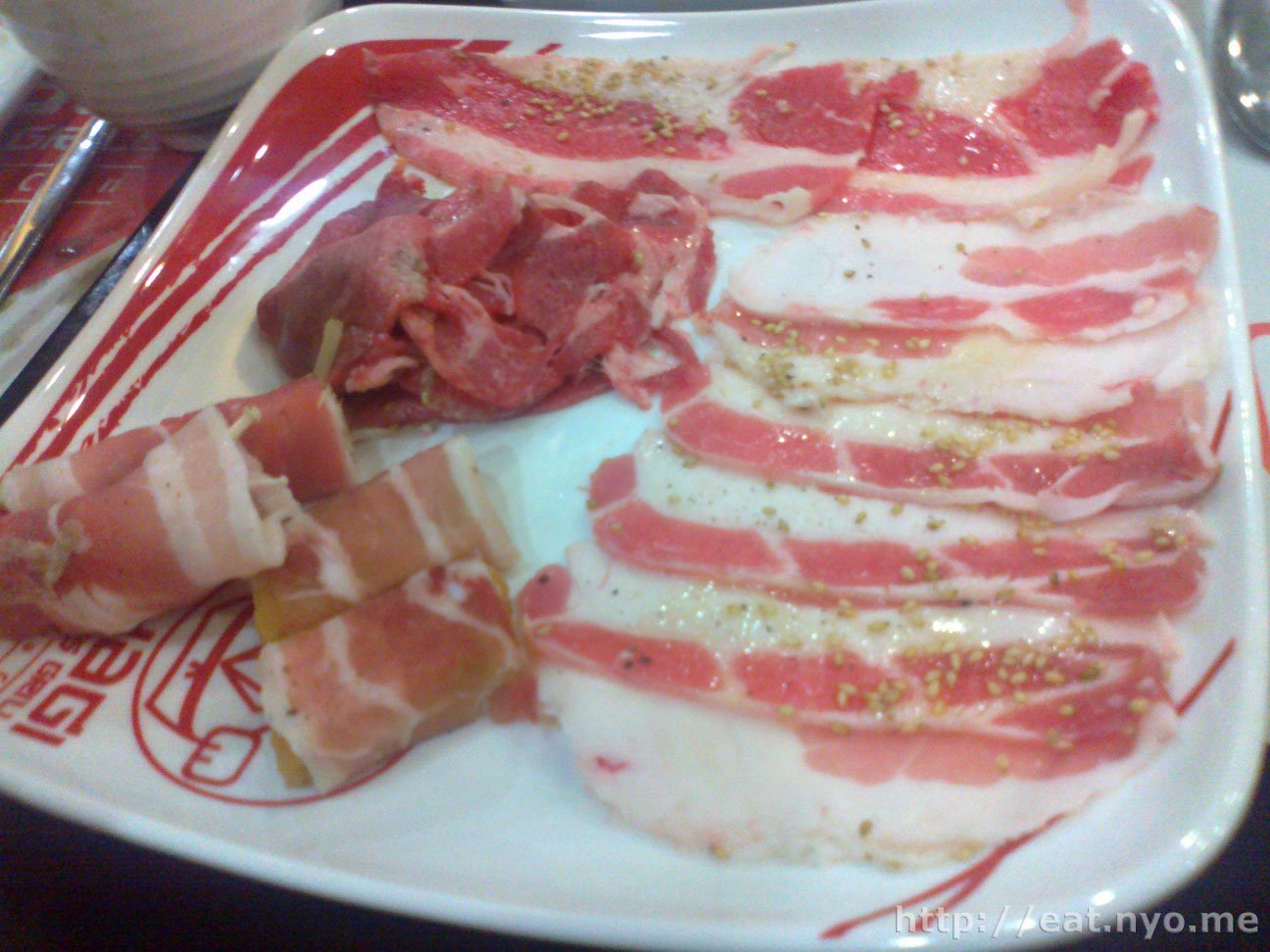 Still following my YBS™, I went to their raw stuff. I took some slices of their plain pork and beef, some of their beef tongue as requested by beloved, and a couple of tofu wrapped in bacon. 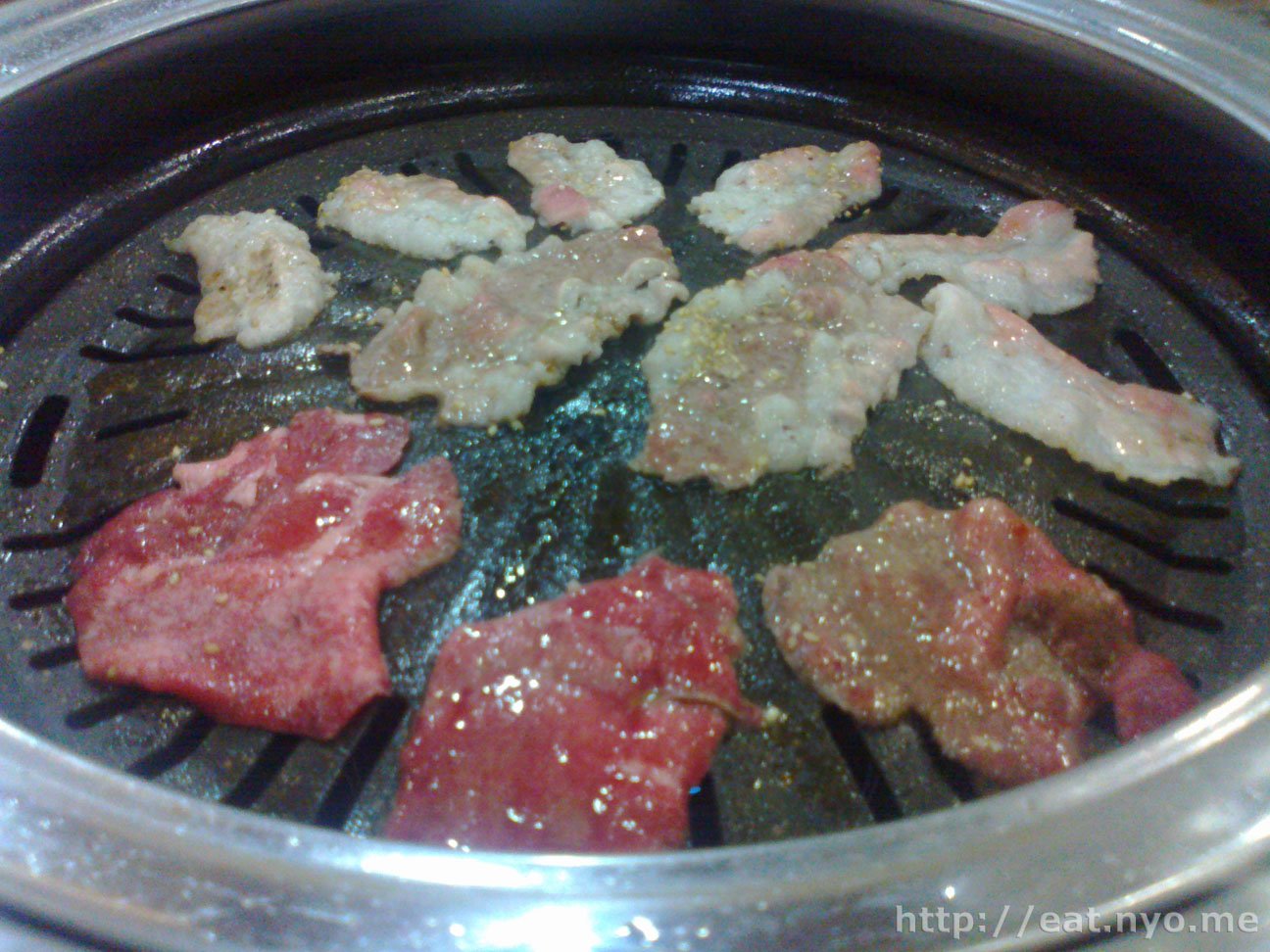 Since the slices were cut very thinly, they also cooked pretty quickly. I did confirm that their meat didn’t taste as good as I would’ve wanted it. Again, sauces make up for it. I liked the Yakiniku one and Beloved liked the Korean Miso. 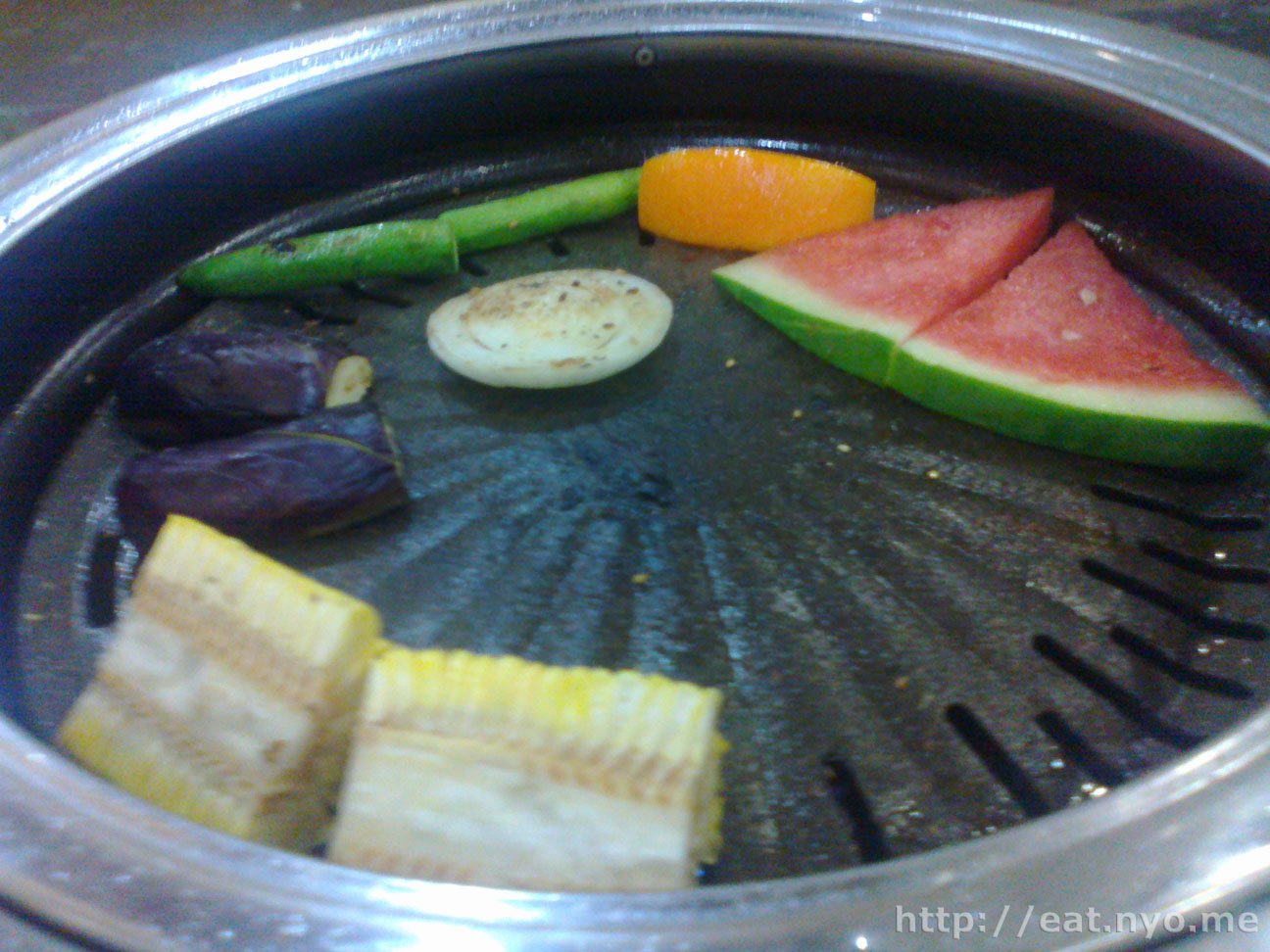 Beloved was pretty much full at this point. Because I was following my YBS™, I wasn’t. I tried some of their grilled veggies. I was unhappy with the fact that my favorite sweet potato and yam weren’t in the selection. They did, however, have eggplant and asparagus, as well as the mainstay onions and corn. Of course, I didn’t forget to grill a couple of slices of watermelon. And since they had some oranges in stock, I decided to grill a slice as well.

After a couple more trips with meat, we decided to wrap it up with dessert, which, sadly, we forgot to take pictures of. This consisted of leche flan, cookies, and ice cream. Beloved didn’t like their leche flan, which was not as sweet as she wanted. I liked it. As for the ice cream, well, no complaints there, obviously.

So, how does Mr. Miyagi fare against their competition? Fairly, actually. Despite having not as much stuff wrapped in bacon compared to Sambo Kojin and slightly inferior meat against YakiMIX, they have superior sauces and not bad cooked stuff. They also have a corner dedicated to ramen, which I didn’t get to try anymore. Given the choices, it pretty much boils into location. If YakiMIX at Tomas Morato is full, Mr. Miyagi at Timog Ave. is a decent alternative.

Not recommended for: Full people.

Smart nomnomnom tip: Take a bit of sweets in between meats and skip the rice.