Beloved and I had dinner at Gayuma ni Maria last night. We’ve known this place, which is located at the Savemore end of Maginhawa Street, where it meets Anonas and becomes V. Luna, for a while but never had a chance nor reason to visit it. Beloved got to try out one of their cakes called “Better Than Sex” during one of the food fairs we attended. Aside from the name, she didn’t really found it special. After looking at the menu through the web, Beloved finally found a reason to go.

The reason for going was basically the names of their dishes. Beloved was giggling hysterically as she read through the online menu. When we got there, through a porch that you occasionally see during Halloween, we found ourselves in a similarly themed dining area. The online menu was a bit outdated, especially when it came to price, but the reason, the silly naming, was still there. Beloved planned to order their version of tom yung goon called “Unrequited Love”, but settled for their French Kiss (295 Php), which was a beef tongue dish with mushroom-sauce. I was going to order their “Holding Hands While Walking Pa-Swing Swing Pa” or “H.H.W.W.P.S.S.P.” for short, solely because of the name. However, I was recommended to order their I Love You, Cross My Heart (215 Php), instead, and I chose to do so since it looked a bit more satisfying, despite being both chicken dishes. We also ordered their Peek A Boo (145 Php), a pumpkin soup, because all the other appetizers we wanted to try weren’t available. 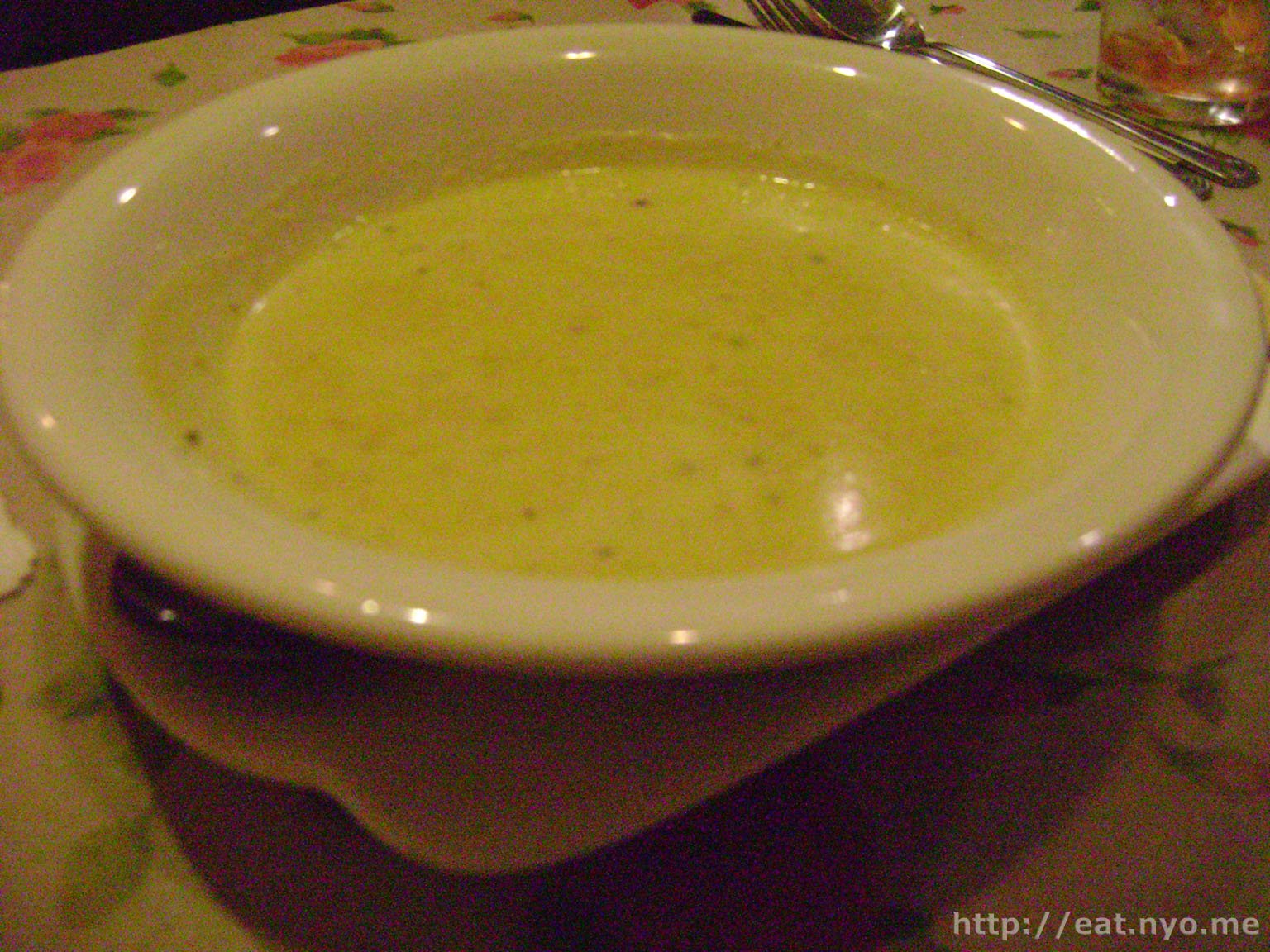 For the price of the Peek A Boo, I expected a bit more. This pumpkin soup, while full of sweet, earthy pumpkin goodness, could barely fill the two of us. The server claimed this was good for sharing, but the shallow bowl, despite its diameter, for me felt like this is only good for one. 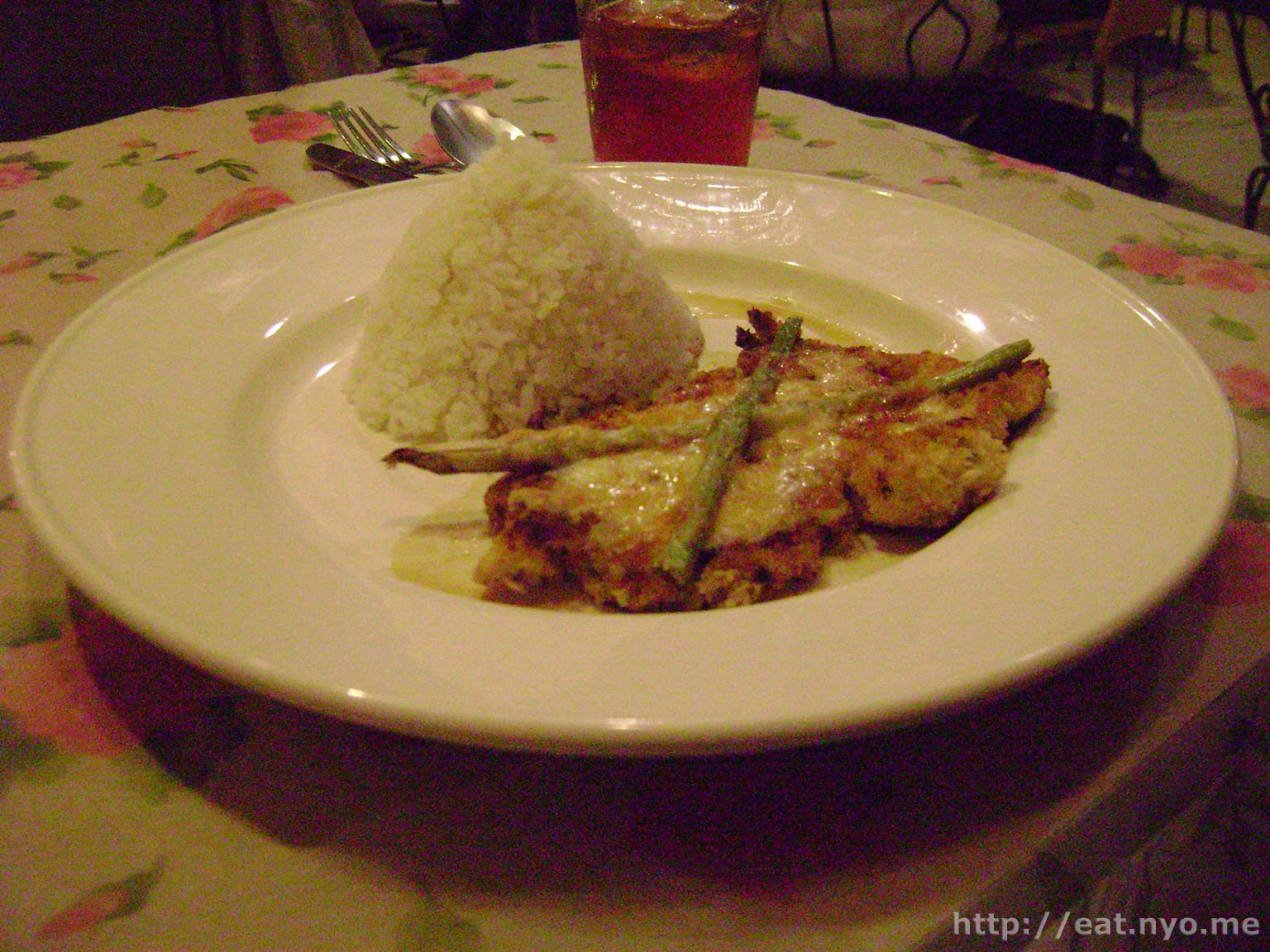 My main dish, their I Love You, Cross My Heart, arrived next. The first thing I noticed was their rice, which was shaped conically like a woman’s breast, missing only its nipple. As for the chicken itself, it was a pan fried chicken topped with cheese and two stalks of asparagus (asparagi?). The way it was arranged clearly explains the name of the dish. Although it was pretty good for a chicken dish, I found the cheese to be lackluster and the asparagus adding little to the dish overall. 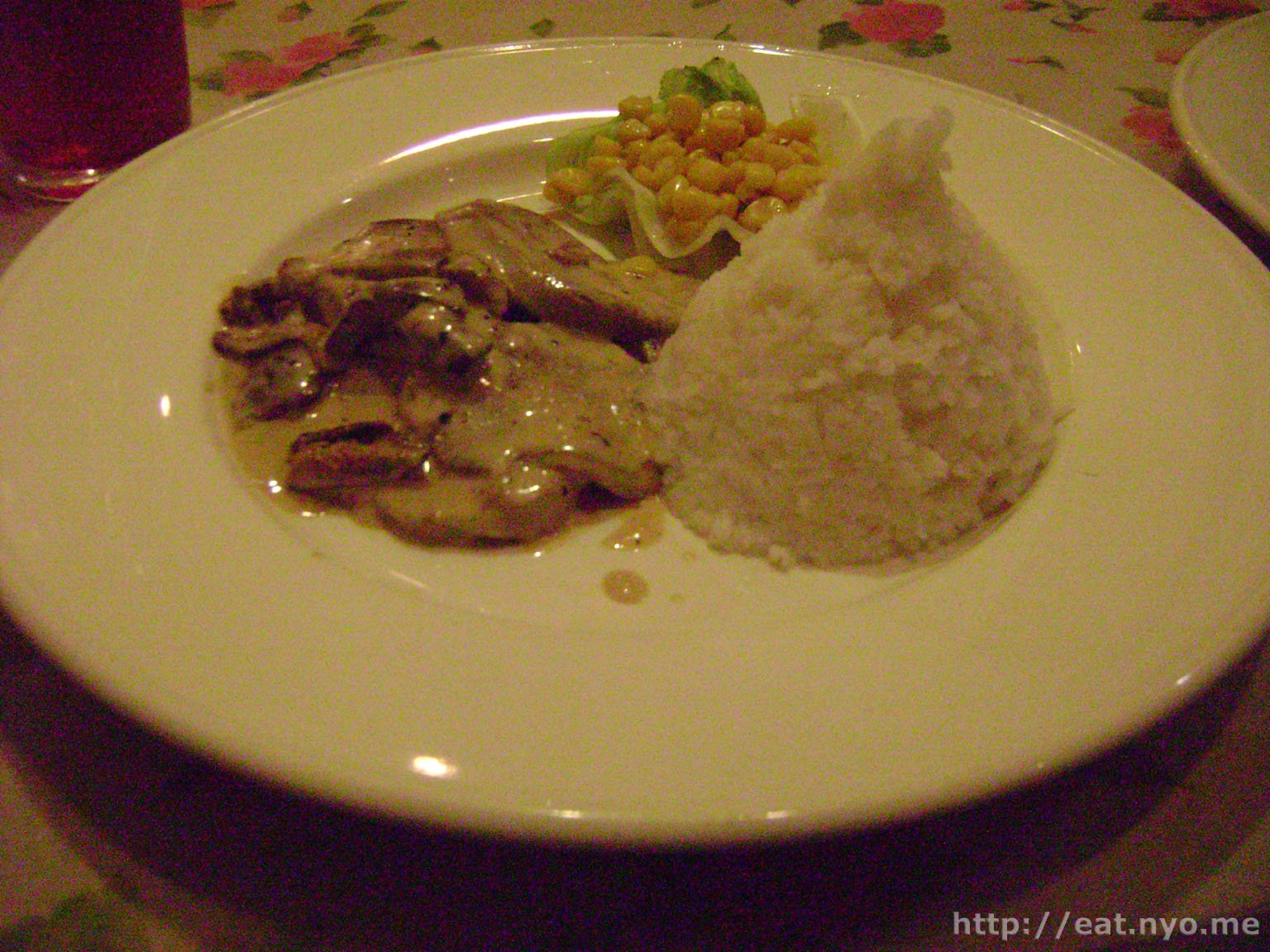 Beloved’s French Kiss, as I’ve explained earlier, was a beef tongue dish, so this marks another “try all beef tongue dishes from all the possible food places in the world” from Beloved’s mission. This was a bit different from most mushroom lengua dishes we’ve tried. The sauce was very rich and buttery and the mushrooms used weren’t the usual button Beloved likes, which means I get to eat most of the mushrooms. While it was served with corn on a slice of lettuce, what I noticed first, however, was the rice was also shaped like a woman’s breast, only this time, it prominently has a nipple. 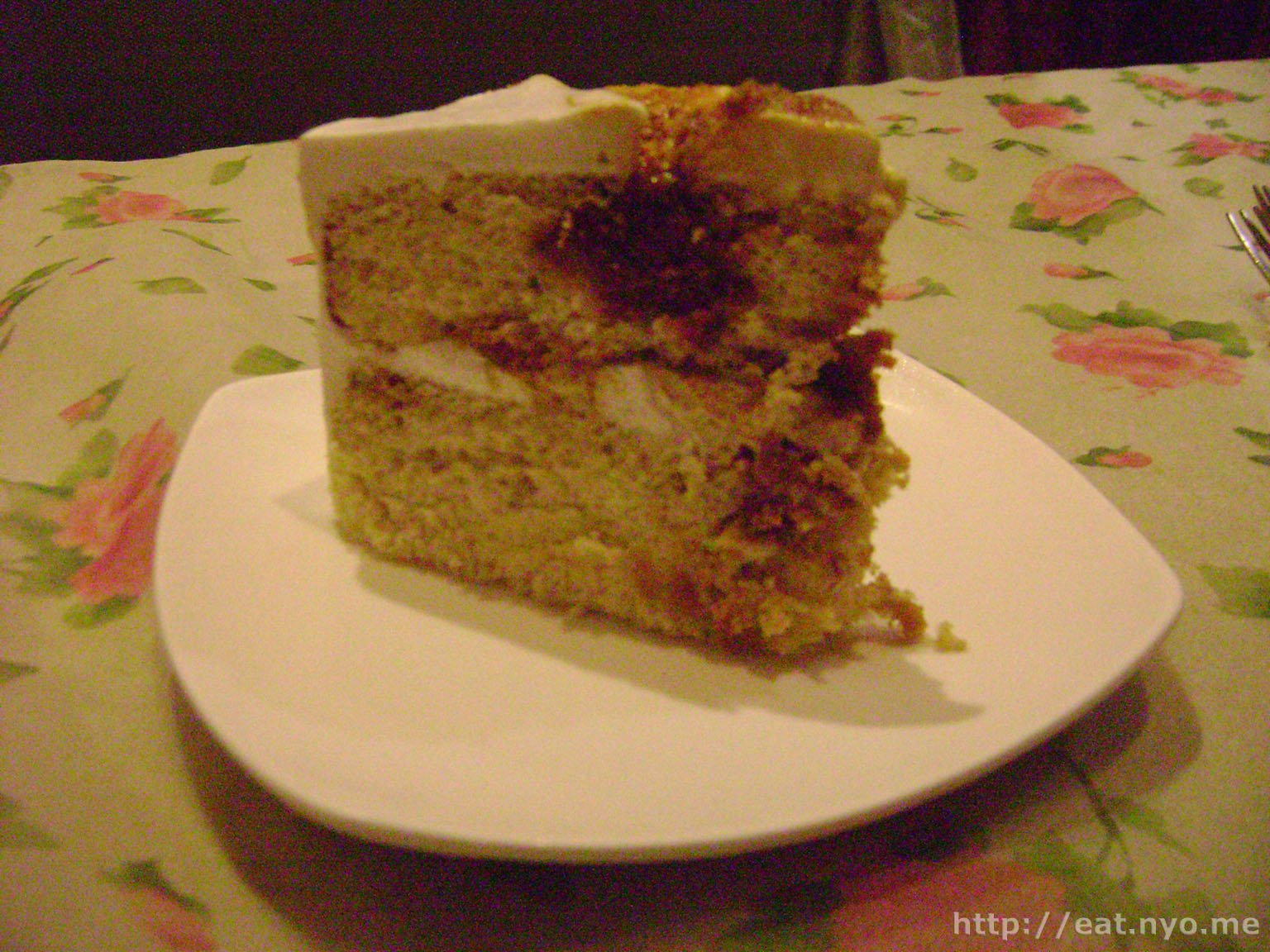 Honestly, we didn’t get too full because of the food. But we did get a bit due to the drinks (bottomless Raspberry Iced Tea for 60 Php each). Despite that, Beloved still wanted something sweet. So we ordered one of their cakes—the Honey Mom (95 Php), which was essentially a coffee caramel cake. I’m not really a cake lover, but I can honestly say that this was the most satisfying dish of the night. It was a simple sponge cake with bits of caramel all over. I started to think, after this, that this place is really a cafe turned restaurant because of this.

Gayuma ni Maria is all about the names. All of their dishes are named humorously cheesy to go with the gayuma theme. Their dishes, while certainly not bad, weren’t really that special. If it weren’t for the names, this would be just another cafe. However, unlike another place serving dishes with humorous names we’ve been to, I can see this place lasting longer, simply because their dishes are a bit more fairly priced and appeals to the general demographic of the area. Be warned, though, if you’re conservative and closed minded, you might not like a corner of the place where they sell cookies and crafts. Also, maybe it was just me and Beloved, but we suddenly became very sleepy after the meal, so be careful when going on dates with strangers at Gayuma ni Maria.

Smart nomnomnom tip: Ask for a 69 on a Wednesday.