Beloved and I had dinner at Van Gogh is Bipolar a couple of nights ago. This, for the lack of better word, strange restaurant is located on Maginhawa Street. The last bit of the previous statement would foreshadow this review. At first, I thought it felt very formal since we had to make a reservation beforehand and the price tag was among the steeper ones we’ve tried. However, since Beloved has been to this place before, she told me that it wasn’t, so, at least, we didn’t have to wear something formal, especially since we had to remove our shoes beforehand.

To start off with the strangeness, the dinner was entitled Cuckoo Gastronomique Nights. As for the place itself, there were no signage or anything aside from the “open” sign outside the door. In fact, it resembles more of a unit at an apartment complex on the outside. We were the first guests there, I guess since it was pretty early, and we were greeted by the owner and host of the place, Jethro. After removing our shoes, entering the place itself continues the strangeness of this story. It was more of a home than a restaurant. The ambiance felt homely despite having plenty of eccentric decorations: mismatching furniture from antique to modern, movie posters, mostly nude photography, a collection of strange hats (which guests are encouraged to wear) and aprons (which I wouldn’t recommend wearing, but it’s up to you), scientific instruments, rugs and drapes, a ceiling lamp made with a parasol, globes, clocks, a corner littered with vandalism made by the visitors, a huge collection of teapots, and other things you would expect (or not expect) from someone who travels and collects stuff around the globe. The soft lighting and choice of music added to the homeliness of the place.

We (I, since Beloved already knew about it) were (was) asked to read the house rules by the door. Apparently, there were no servers, and self-busing is required. What surprised me more is that the place can and will only accommodate twelve people at a time. We were asked where we wanted to stay—either at one of the three small candlelit tables for two at the living room or one big one at the dining room. We chose one at the living room which I later found out to be a converted sewing machine. Then, we were allowed to make ourselves tea using one of the many teapots and your choice of tea leaves depending on your mood. Might I add that they weren’t your usual tea leaves—he offered dried leaves from plants you would find outside one’s home, such as guava, mango, or guyabano. Now, to order, we were asked to choose between four to eight courses varying in prices. We chose the four-course offering, which Jethro explains really is more of a five-course offering, priced at 777 Php with a choice between either a “Happy” fish-based meal or a “Chill” meat dish as our personalized main course. We had to write it down on paper, ring the bell, wait for the kitchen window to open and give the paper. 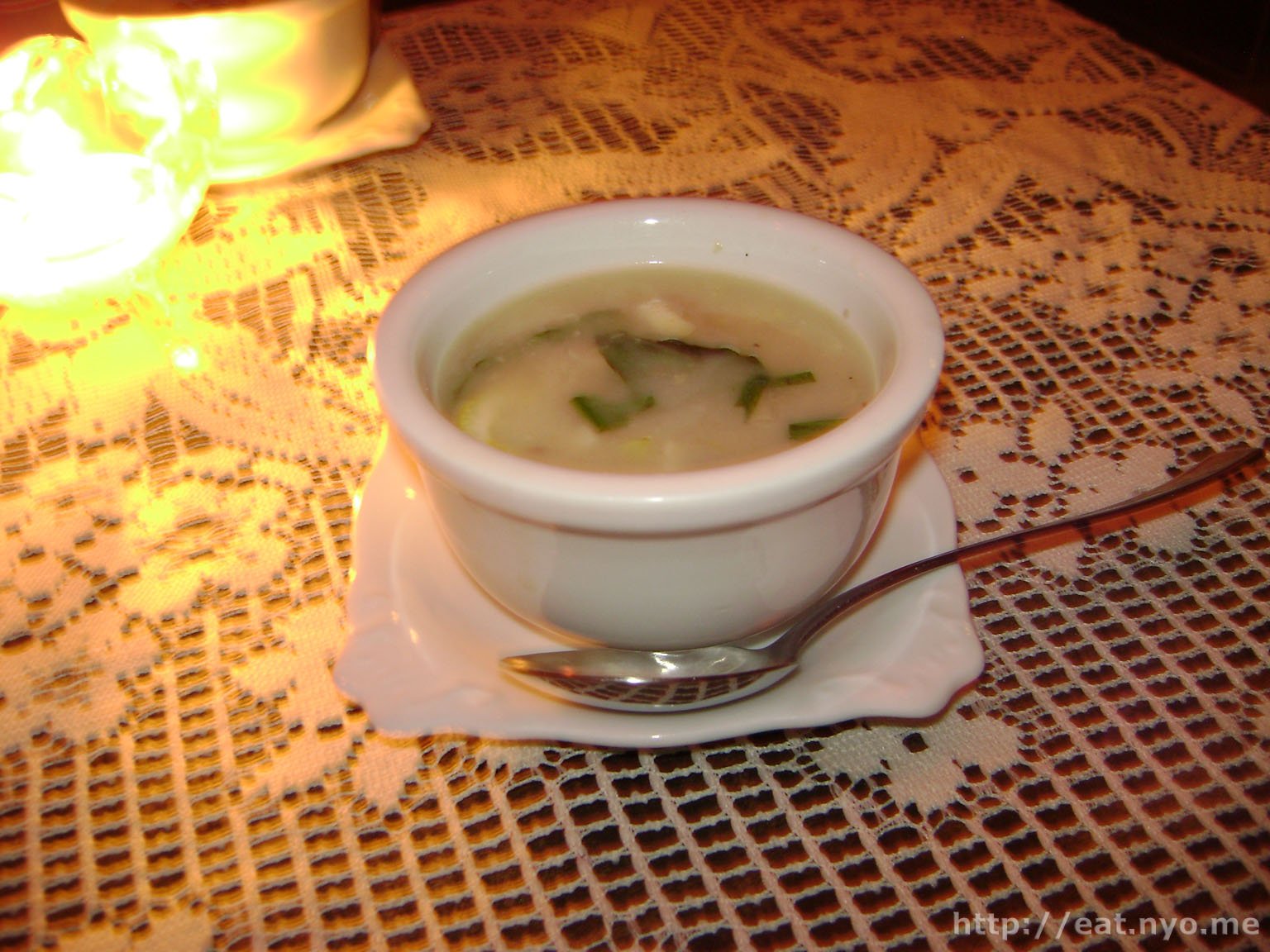 First course was soup. If my notes are correct, this is called Virginia Woolf Tears. It was a turkey soup with bits of what I believe is guava, a bit of turkey meat, and some sort of crunchy pasta. It also had herbs and a slice of lemon. While I stress that the place is weird, it was a pretty normal, but pretty good start. 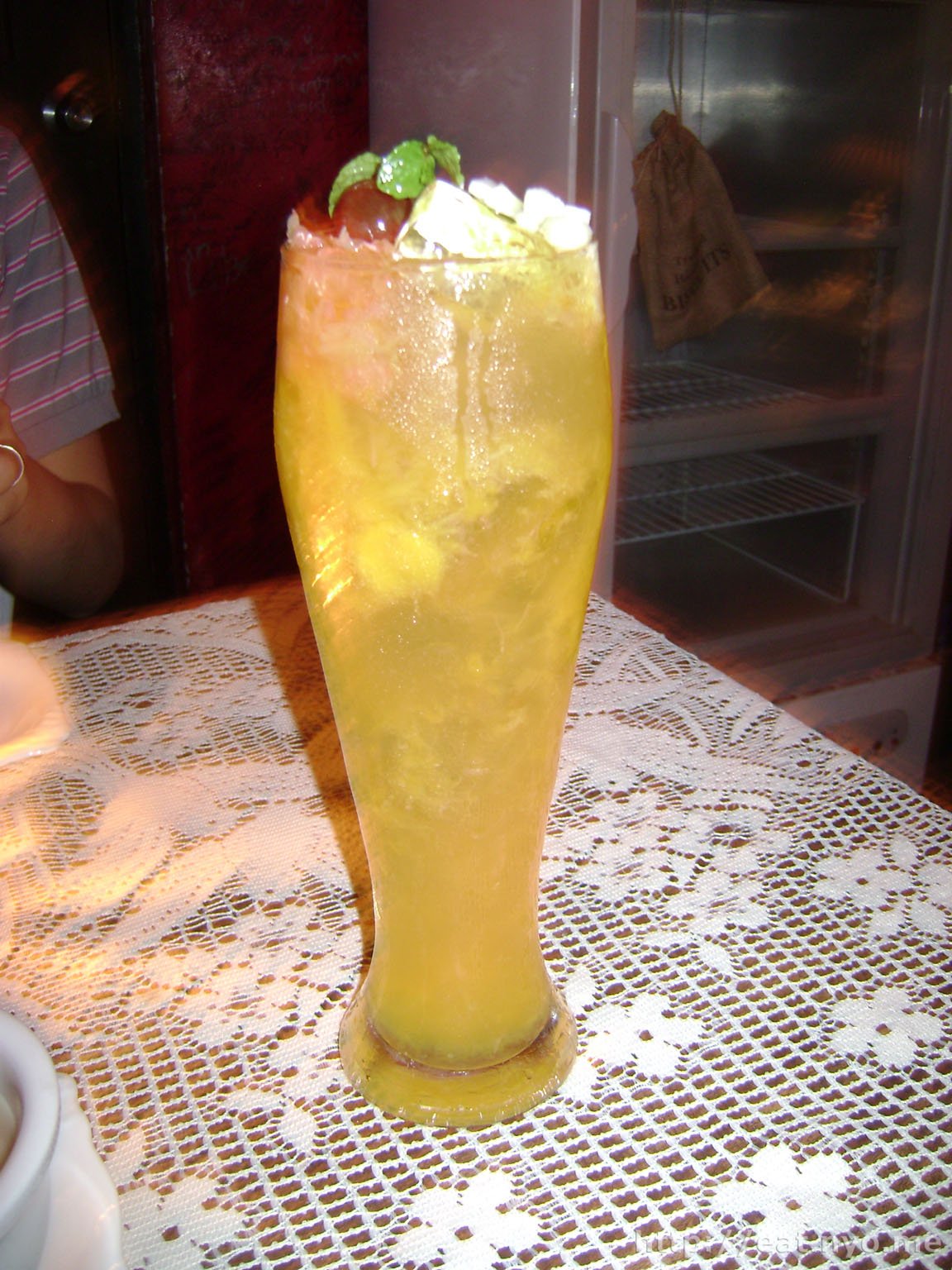 While we were having our soup, we were called again to get what was called Courtney Love’s Potion of the Day. According to the menu, this was a sugar-free fruit juice, with the only sweetener being honey and the fresh fruits themselves. Served with a cherry and mint leaf on top, it also had bits of guava for a surprising change in texture. If I had to guess what fruits were used, I would go with suha, or pomelo, since I found bits of it in the concoction and because it was a bit sour. Beloved guesses it to be pineapple plus some other stuff. I didn’t ask Jethro because I want to be surprised and want to test my gourmet knowledge. It was more than enough to last us the entire night, not counting the hot tea we were allowed to help ourselves with. 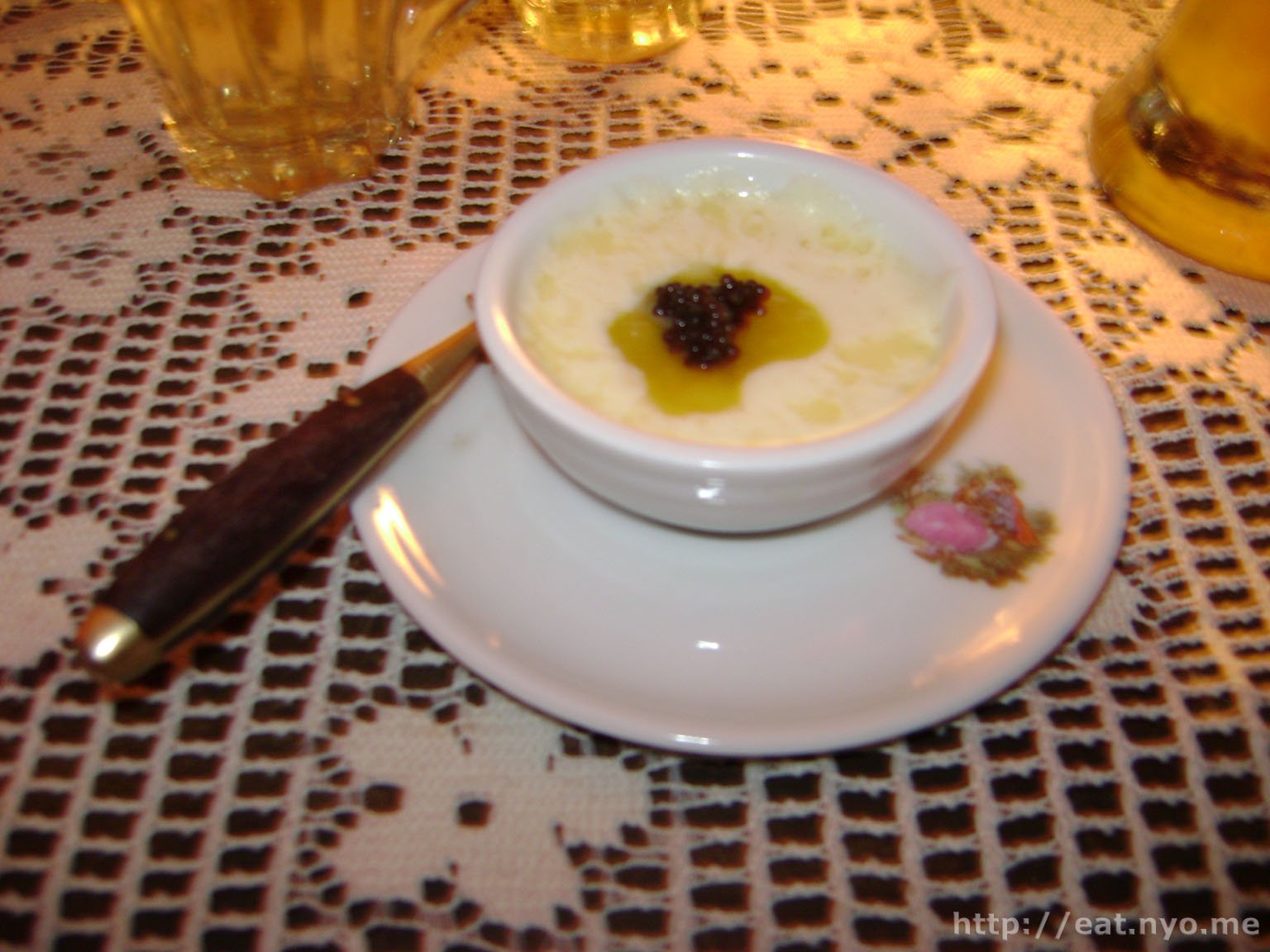 Once we were done with soup, we were called again to get our appetizer course. This was called Catherine Zeta-Jones’ Luxurious Mouth, which was melted mozzarella with cottage cheese topped with caviar. Although it was only a mouthful’s worth, the stringy mozzarella literally extended it much to be appreciated, especially for a cheese lover like myself. 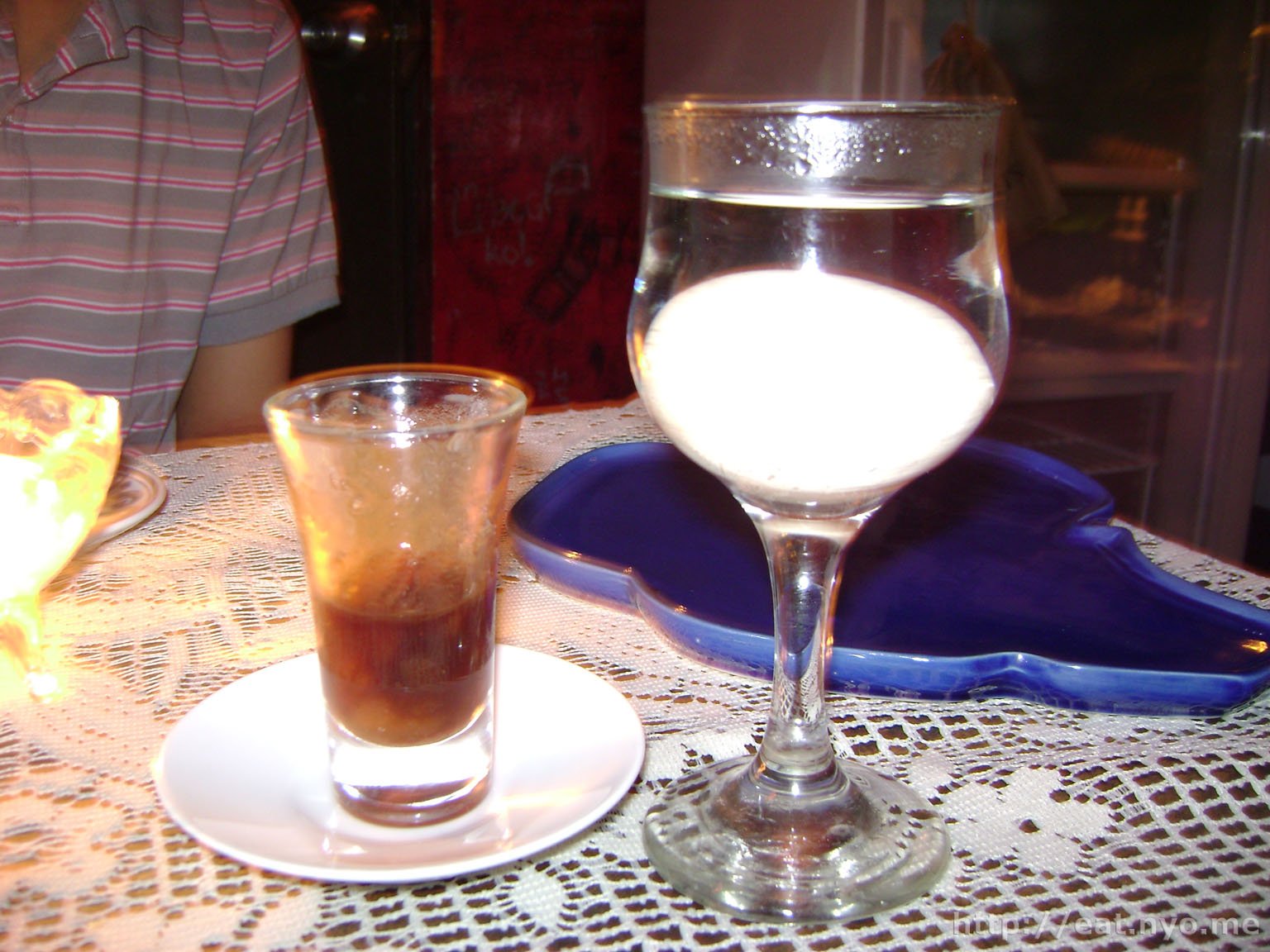 Our second appetizer, this was called Axl Rose’s Organic Egg Shot. Now, this dish arrived the same time as above, but Beloved dreaded this one. She didn’t get to try it the last time she went here because of the raw egg. However, I noticed that the egg was cooking on a glass of hot water, so I guessed it wasn’t really raw. It was one of the more complicated dishes we were served (and the way I wrote that forebodes that there will be more), adding to the strangeness of the place. When we were ready, Jethro cracked open the organic egg, confirming my suspicion that it was at least half-cooked, and got rid of the egg whites, and placed the yolk on the shot of fruit sauce. It was stirred for a bit, and finally, we toasted and drank it in one shot. If I had to describe it, it wasn’t bad at all, but that’s coming from someone who thought that tamilok, or shipworms cooked in vinegar, wasn’t bad as well. The dominant taste was the sour fruit it was mixed with. The egg provided the promised extra kick of weirdness, but wasn’t inedible. Finally, it ended with a salty finish. We were promised different layers of flavor and it was indeed what we got. Beloved vowed never to try this again. I wouldn’t really order it for myself, but I would go for it with a dare. 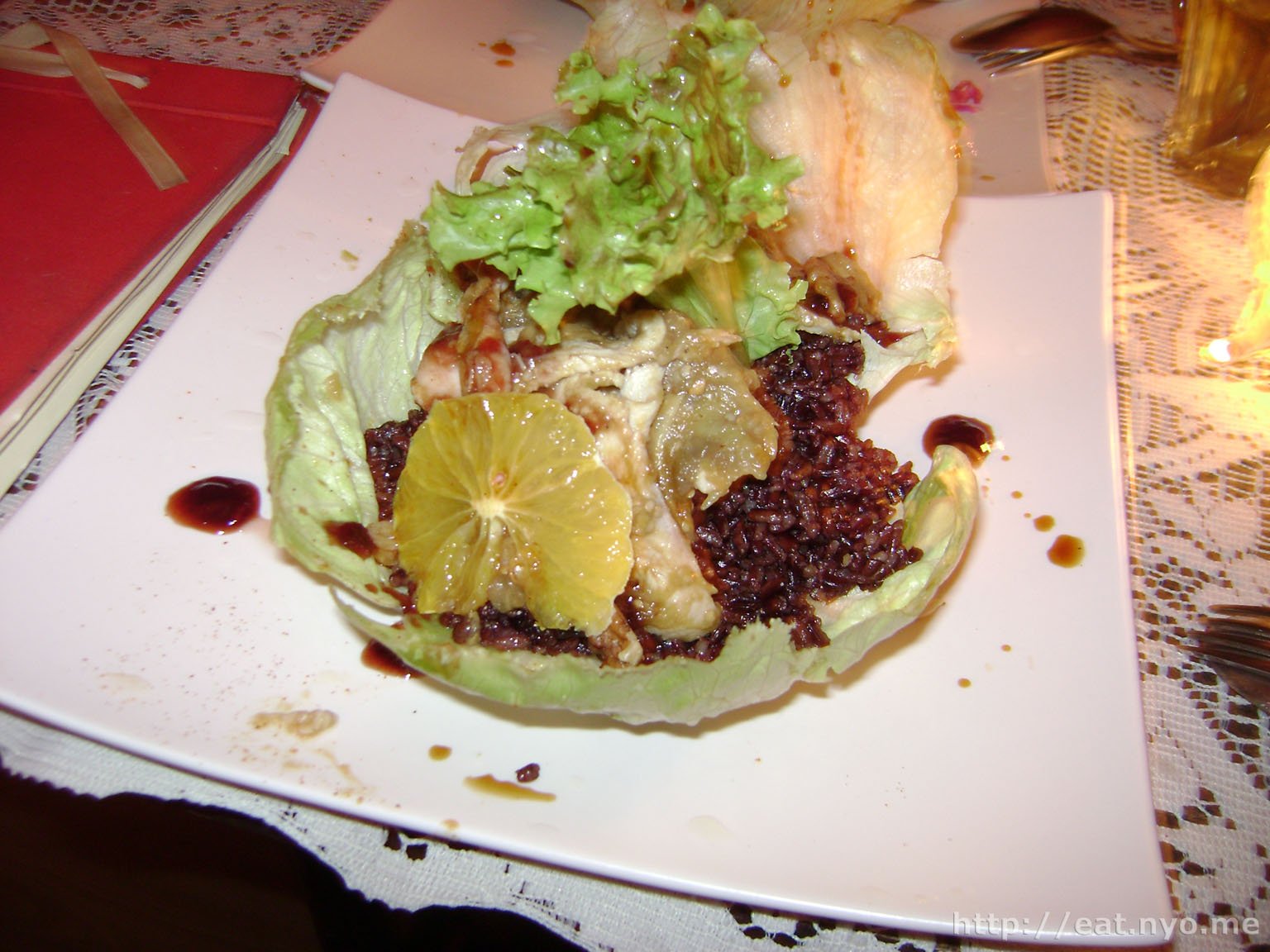 Our main courses arrived with a ring of the bell. This was the “Chill” dish. Since this was personalized, it wasn’t in the menu, but was probably a mix of the Saint Francis’ Minty Organic Chicken salad dish and Pres. Bill Clinton’s Turkey Rice Adobo Black Rice Pilaf main course, replacing the turkey of the latter with chicken of the former. Anyway, this was organic chicken, using the white meat, served on black rice and greens. The chicken was well done, in both meanings of the two words, which is the only meat I’ll have well done. And yes, that means it’s very good. It was very moist and savory. The sauce it was topped with had a sweet and slightly sour orange taste, which was easy to guess because there was a slice of orange, cut strangely, I might add, on top. Jethro explains that he only serves white meat because it was calming, hence the “chill”. Maybe it was psychology in words, but I admit that I really did feel calm while eating it. The black rice, he explains, has the same property as well. This was my first time trying this kind of rice, and I found it pretty surprising. Usually, for short-grained rice such as this one, I expect some sort of stickiness, making the grains clump together. However, it wasn’t that sticky—it felt as if each grain contained all the stickiness within. I finished the plate in a chill fashion. 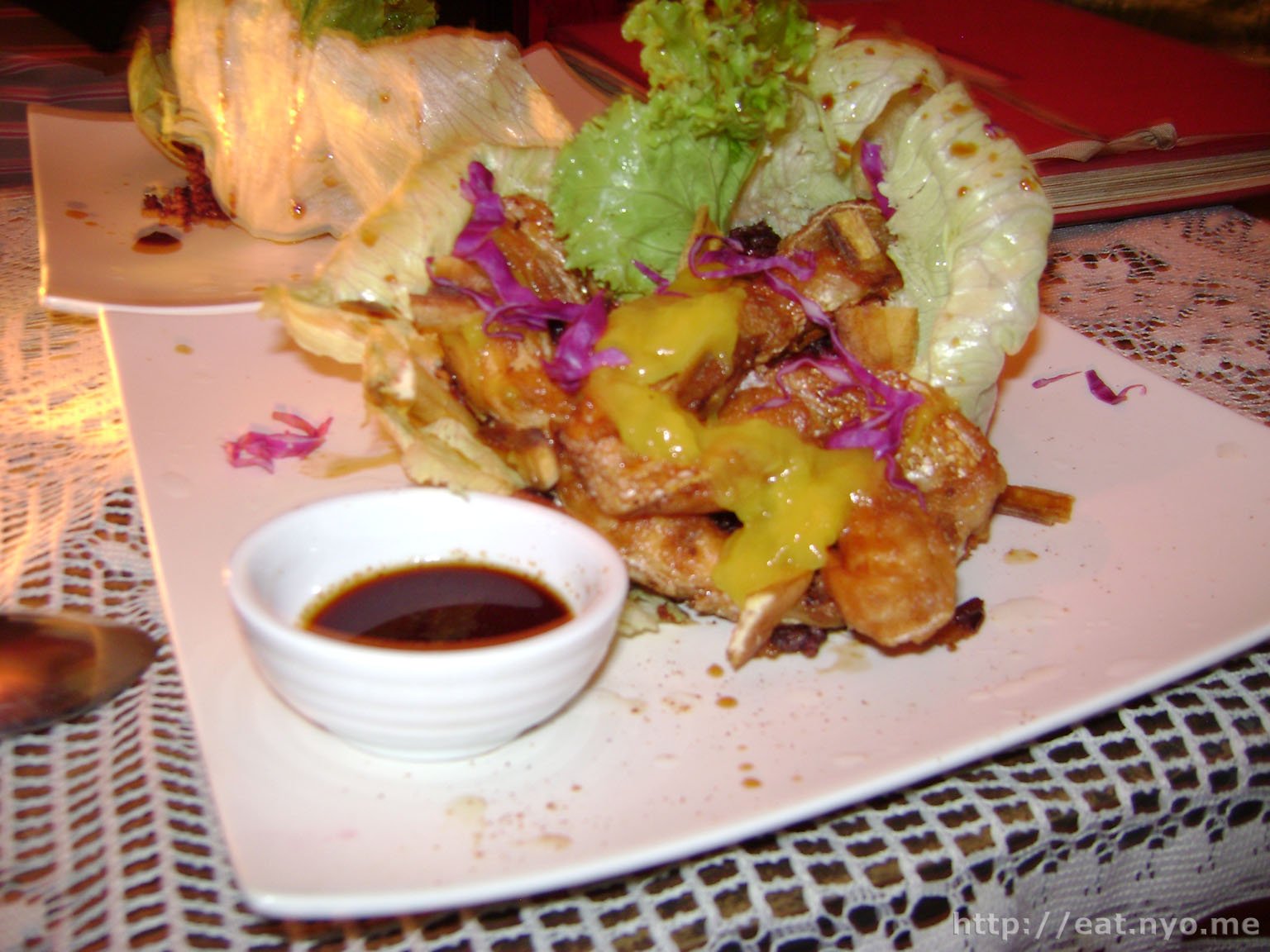 Beloved’s “Happy” dish was similar to mine, replacing my chicken with pan-fried salmon and my sweet-sour orange sauce with a sweet mango one. I guess this was their Pres. Theodore Roosevelt’s Salmon Black Rice Pilaf. Beloved is very picky with her salmon, and she usually dislikes it when it’s cooked. She liked this one a lot. I had a couple of bites of it, and I also found this to be one of the most properly-cooked salmon I’ve had: just enough of the melt-in-your-mouth factor we love in salmon in one crispy package. She had to take care, though, because it still had some of the bones attached. She didn’t use the balsamic vinegar served with it, since she didn’t like it sour, and fancies the natural fishy taste. 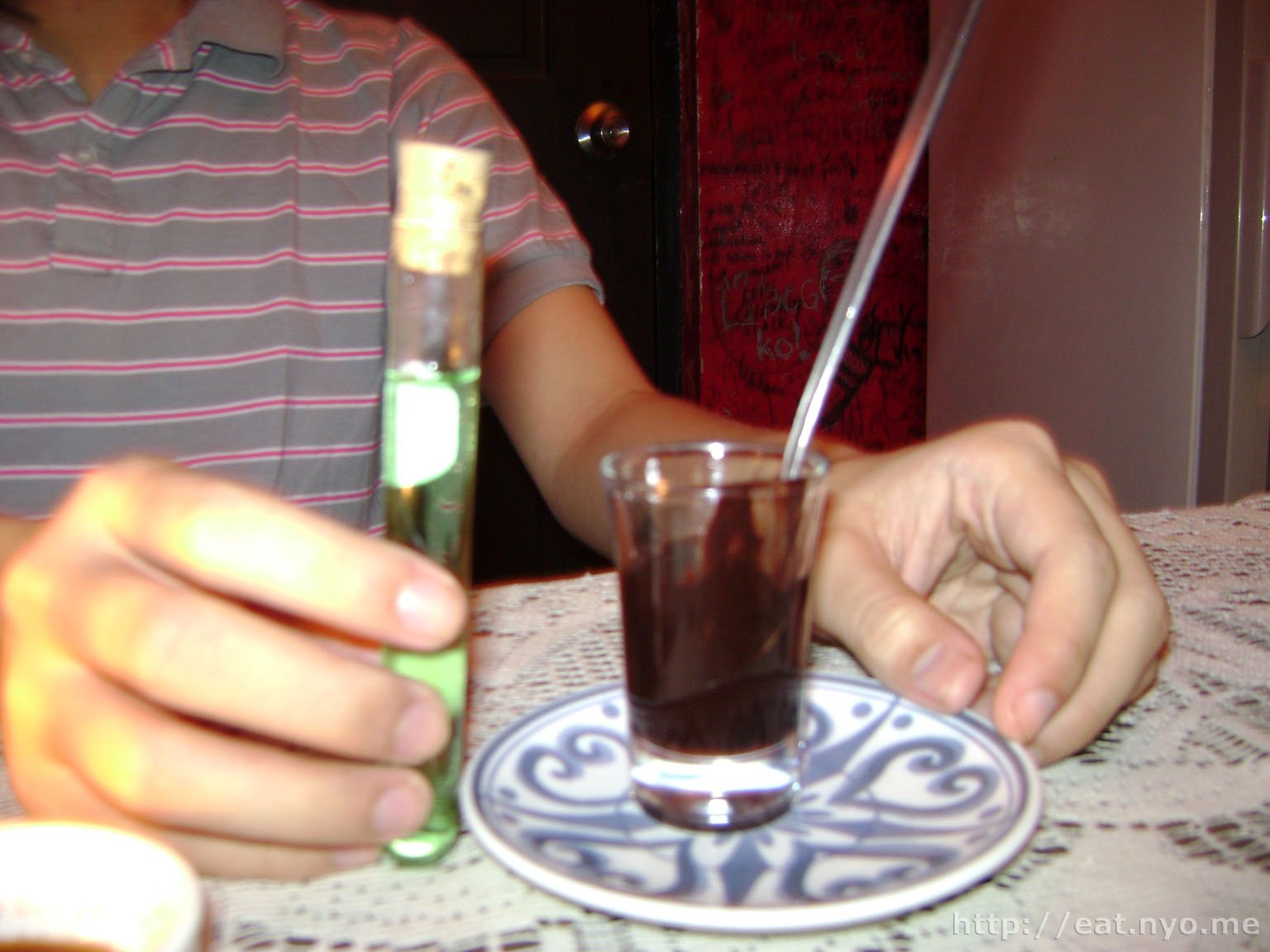 Our dinner ended with a similarly strange dessert as our second appetizer. The dish was called Mel Gibson’s Darkest Sin. We were both given test tubes worth of absinthe, a liquor which Jethro jokingly (hopefully) says was illegal in our country, and shot glasses worth of dark chocolate. When we were ready, we were to down the entire test tube and consume the chocolate immediately after. The liquor was very strong. My insides felt hot immediately after consuming it. The bittersweet chocolate was a welcome chaser, and the big piece of walnut in it was a pleasing crunchy finish.

This was indeed a strange place. Just considering the food, it was basically an alternate between not-so-strange and very, very strange dishes. I should mention that while waiting for our main course, after downing the raw organic egg, we were invited to the dark room just before the W.C. to write our deepest, darkest secret, as mentioned in the house rules. Indeed, written all over all the possible surfaces in the room were dark, anonymous (although some were not) secrets written by the guests using neon-colored highlighters, making the room glow eerily with secrets. Whether we wrote ours or not is a secret. Also, before leaving, I found out that self-busing also applies to payment. You have to honestly leave your payment to the safe box and get your change. Since we felt they deserve it, we didn’t bother with the change part.

We made this blog as an honest place to check for reviews of places around the Metro, putting emphasis on the taste of food and value of it. However, this place cannot be reviewed for its food alone. If it was, it would probably just get one thumbs up, maybe two, since the food was indeed very good and very unique, I might add. However, I personally can’t find myself craving for the food we tried. It would certainly get above passing marks, and maybe reaching the “must try” status that I put into my favorite places.

However, as I’ve mentioned, this place is more than the food. What we paid for was the entire experience. If everything was based on first impressions, I cannot imagine any guest of this place (who gets to try it, at least, since the place strictly only serves twelve at a time and eccentrically goes on off-days every once in a while) who did not have a memorable experience. This includes not only the food, but also the ambiance, the house rules, the dark room, the tea-making, the self-busing of the food and used dishes and payment and change, and the hospitality of the host. In addition, I actually learned a lot from this place. For these reasons, I believe Van Gogh is Bipolar deserves the extra thumbs up, and its very own rating description.

Smart nomnomnom tip: Right now, Saturdays to Mondays are reservation only, and Wednesdays to Fridays accommodates walk-ins; contact +639228243051 for reservations.