Beloved and I had dinner at Yoogane a couple of nights ago. This relatively new Korean restaurant opened shop at the same building on the same floor of one of our favorite Japanese restaurants. Beloved had the chance to eat here before, and forewarned me of the spiciness of their specialty, Dak Galbi. Since our recent Korean restaurant ventures proved deliciously fruitful, I gave it a shot.

Every table is equipped with a stove. Beloved explains that the Dak Galbi is cooked in front of you. Although unlike other Korean or Japanese barbecue places we’ve been to, this place have cooks cooking for you. All of their specialties include chicken plus some other meat. We decided to order their Marinated Chicken Galbi & Assorted Seafood, which came in 900php and 1200php variants. Obviously, we chose the former. I should add that this is the only menu item that has this tag, the others are priced 300Php or less, but I assume these are only good for one. We chose this since this was the only one that came with seafood. Aside from that, we ordered a couple of side dishes, their Assorted Add Ons (200 Php) and Beloved asked for their Udon Noodle (90 Php). 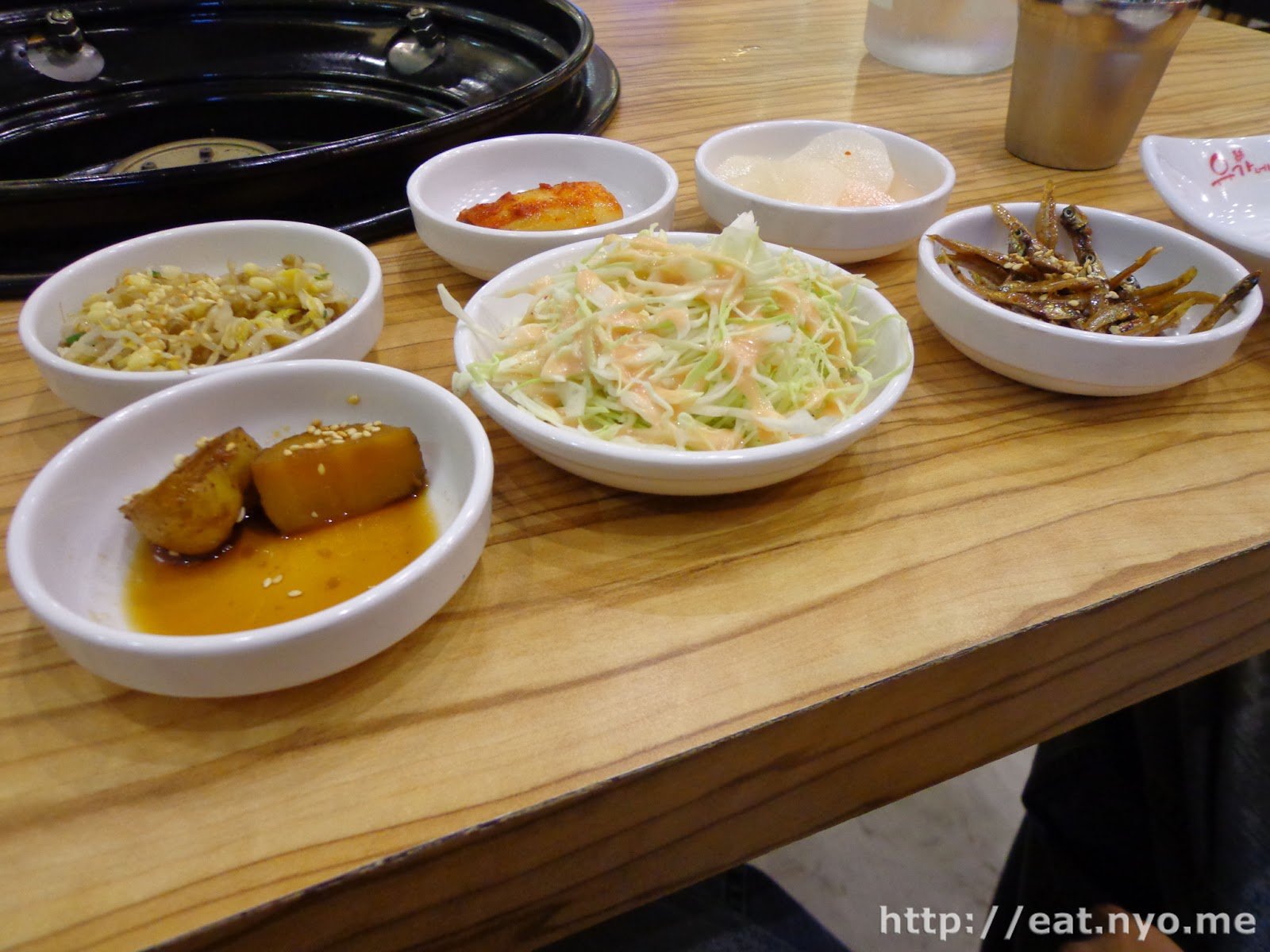 Similar to other good Korean restaurants we’ve been to, they serve complementary Banchan, or appetizers or side dishes. Included are bean sprouts, kimchi, pickled radish, sweet potatoes, coleslaw, and anchovies. All of them were pretty good. I enjoyed the radish and anchovies the most. What I disliked and regretted about this was that we almost finished everything while our food was being cooked, which I’ll expound more about later. 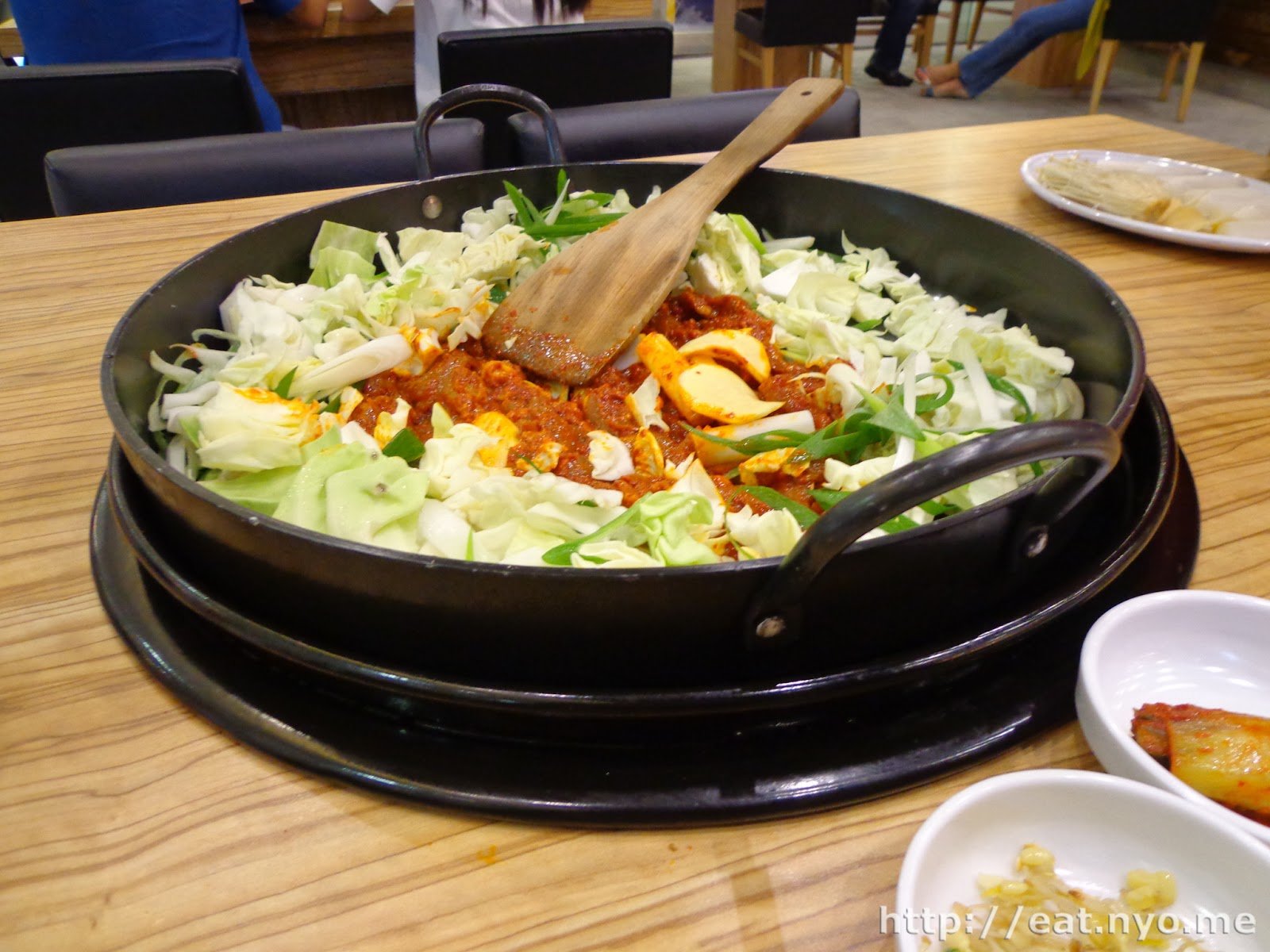 The pan was already filled with a LOT of greens and the chicken and spicy chili pepper sauce in the middle. I guess this was the “marinated chicken galbi” part of our Marinated Chicken Galbi & Assorted Seafood order. As I mentioned, this was still uncooked, and the cook turned on the burner and started stir frying the dish. 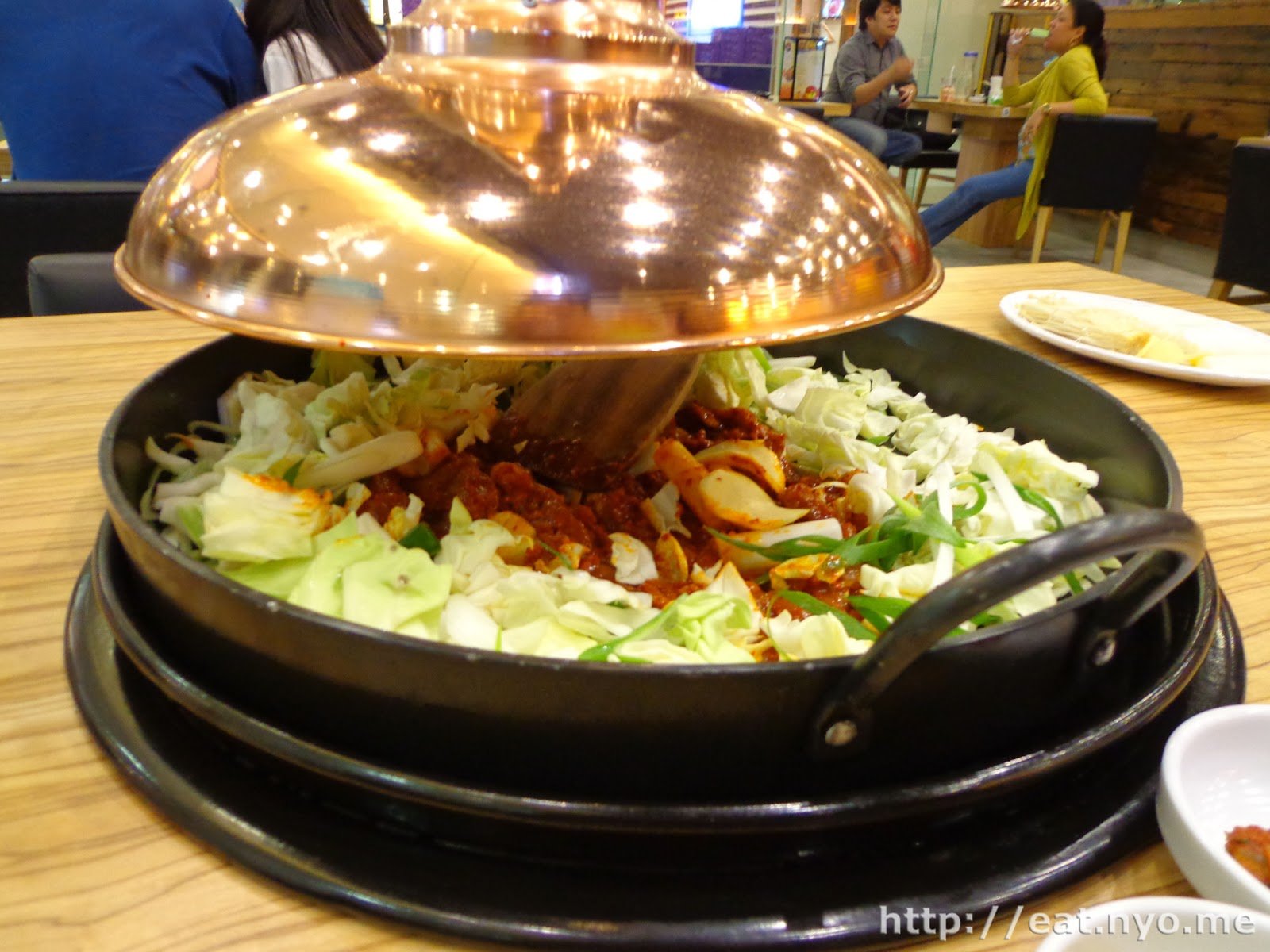 When it got smoky, they pulled the exhaust pipe that hovered over each table. They would push it back up when they resumed cooking. 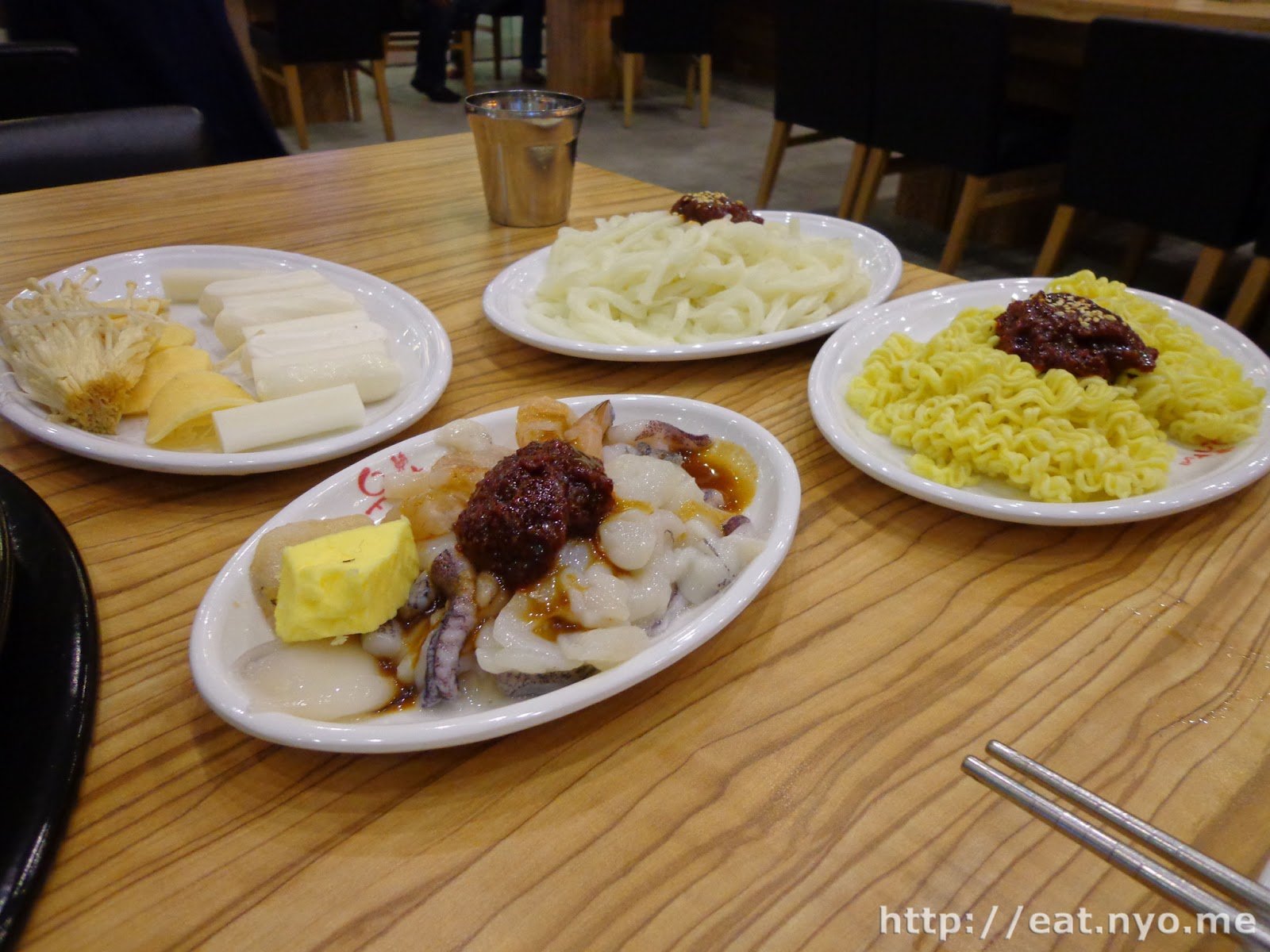 While the main part of the dish are being cooked, the rest of our orders arrived. The seafood included in the “seafood” part of our order were shrimp, squid, and fish. The Assorted Add Ons included enoki mushrooms, sweet potatoes, dokiboki or rice cakes, and ramen noodles. Of course, they didn’t forget Beloved’s fatter Udon Noodles. Of course, they included everything in the pan once the chicken got cooked. 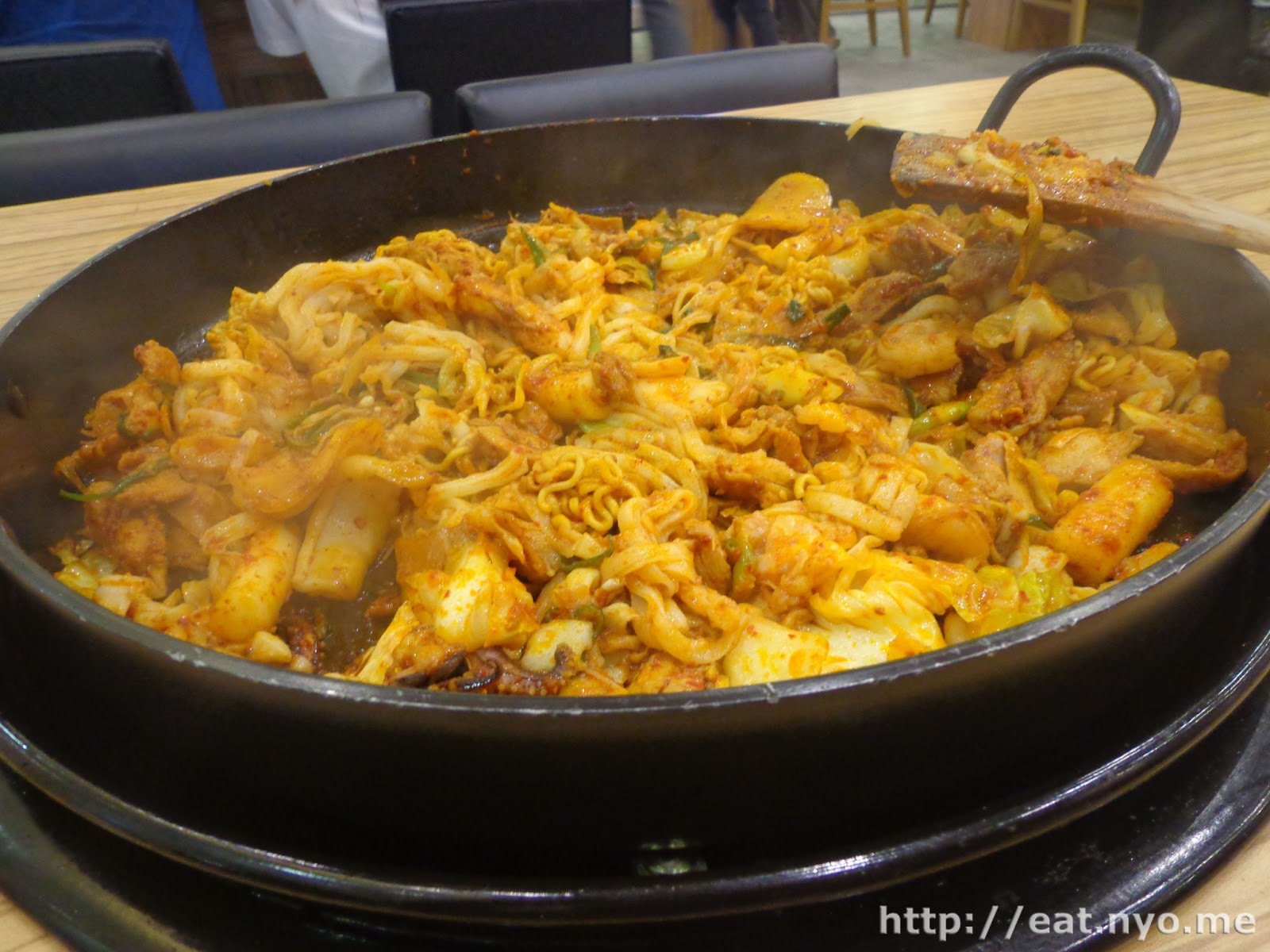 The finished product looked something like a merge between paella and pancit. Since it was freshly cooked, the cook warned us not to touch the pan. Of course, the stove was turned off, so it shouldn’t get overcooked. How was it? Spicy. But it’s not really an intolerable kind of spiciness where your mouth feels like a stove in its own, no. Its the kind where it just tingles your tongue and has a very hot aftertaste as you swallow. Overall, it wasn’t so bad. The chicken seemed perfect for the dish, as it still has some sweetness in it and despite being cooked the longest, it’s still quite tender. As for the rest of the dish, the rice cakes stood out for me. Their stickiness provided the most contrast in texture over all the other stuff in there. I also learned that Beloved hates rice cakes and sticky stuff in general that night. Texture-wise, this dish is pretty good, especially with the amount of crunchy greens and chewy noodles and sticky rice cakes included.

The main problem with the dish is the flavor. Aside from the underlying sweetness of the chicken, the rest of the dish tastes like the chili paste they’re covered in. And since there are a lot of them, you can just imagine how much more intolerable it got as we consumed more of it. This is where my regrets regarding finishing all the side dishes earlier. If we still had some of them around, it would’ve been great. I didn’t ask the servers if they refill their side dishes since I thought it would be improper as I’m sure we won’t be able to finish everything off. Instead, we conceded to leave about a quarter or so of our order.

Don’t get me wrong, as I mentioned, it’s not terribly bad. It’s just spicy. If you love spicy food and can down a bilao’s worth of spicy food, then this is a good place for you. To find at least two companions with the same tastes would be the challenge. I mention it like this because I assume everything gets mixed in together or at least tastes the similar, even if you order separate Dak Galbi. Our bill amounted to almost 1.2k Php. However, note that we ordered food good for about three people. To finish our night, we were given a bottle of Yakult which certainly does a great job ridding your mouth of capsaicin. Anyway, Yoogane promised to be a spicy venture, and one worth the try. I probably won’t come back here, but I’ll certainly recommend this place to people who love the spicy side of Korean food.

Not recommended for: Spicy food haters.

Smart nomnomnom tip: Do not touch the pan.