Beloved and I had dinner at Clawdaddy a few nights ago at Robinsons Magnolia. It was my first time going to that mall, and I was quite surprised at the various food places the mall houses. From its name, you can assume that whatever it serves must have claws. Sure enough, it boasts crabs—one of my favorite foods—as their specialty. Since this was among the few places this mall houses that we have yet to tried, it was a very tempting place. What made it a done deal was a promotion wherein if we pay more than 1000 Php, we get a free dish. Sold.

Although I really wanted just crab, Beloved wanted the easier-to-eat shellfish. Luckily, aside from crabs, this place also offers various kinds of shellfish and seafood. They also offer a particular dish that consists both crabs, shellfish, and even shrimps, among other stuff. We went for that: their Seafood Boiling Bag (899 Php). It actually had quite a few variants, but what we chose was basically the most “complete” one. They also offered it for two or four, but since there were only two of us, we choose the smaller portioning. Also, it luckily came with a free pitcher of either iced tea or lemonade. We chose the former. We also got their Fresh Oysters on Half Shell (198 Php) because we both like fresh oysters and we wanted to reach the 1000 Php offering. Our free dish was their Garden Pizza. As we waited for our orders, they gave us a sliced corn on the cob on the house. 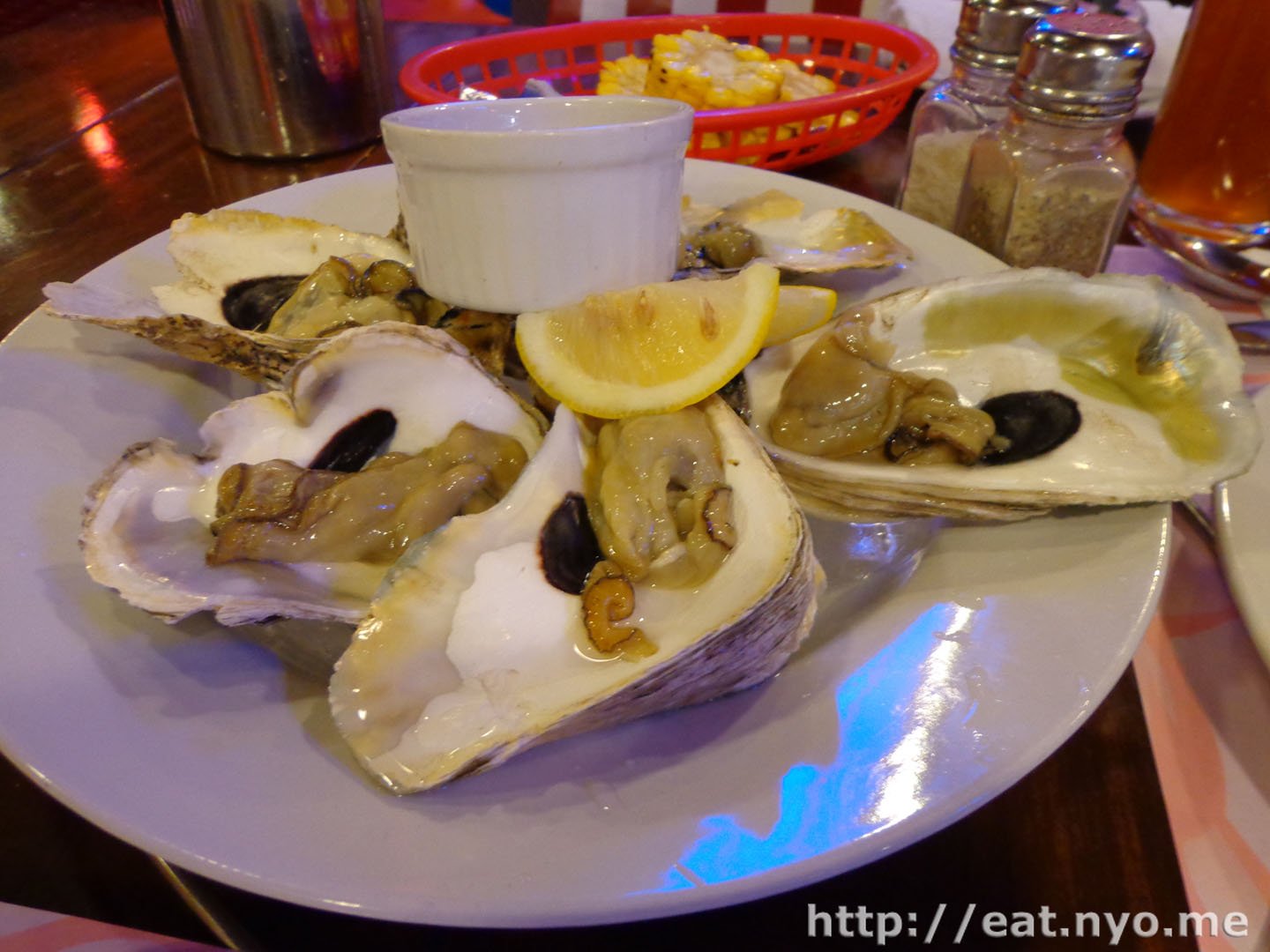 The Fresh Oysters on Half Shell arrived in a pretty big plate. On it were six halved oysters on huge shells. Admittedly, the meat wasn’t as big. However, it did promise its name—oysters on half shell. I wasn’t 100% sold that it was fresh, since they were a bit cold. I had a feeling they were frozen, perhaps flash frozen. Beloved was a bit saddened that they didn’t serve rock salt with it, instead only served the usual lemon wedge to be optionally squeezed on (we did) and a ramekin of sweet chili sauce. The sauce was a bit more on the sweet side with just a hint of chili. I would’ve wanted Tabasco instead. We didn’t ask for our preferences, which I really hope they carry in store, since there were only six of them and we consumed the entire dish pretty quickly. 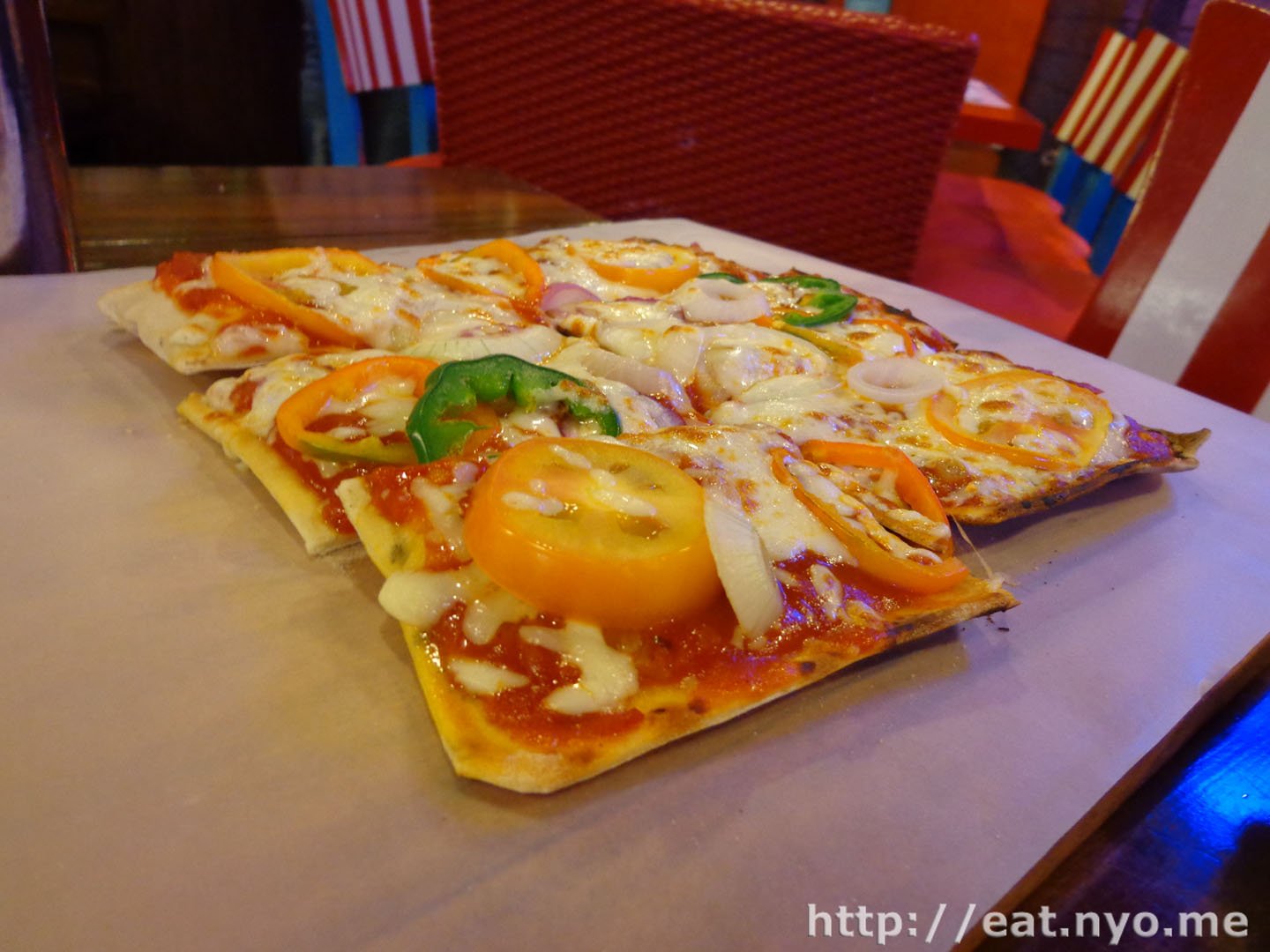 Our Garden Pizza, luckily, arrived quickly after that. It was a pretty small rectangular pizza, I assumed grilled, since it was thin and crispy. The toppings were pretty simple vegetarian offerings: sliced tomatoes, red and green peppers, and sliced onions on melted cheese and sauce. What surprised me, which I’m still not sure if it’s good or bad, was that the sauce was ketchup. At least, I’m 99% sure it was ketchup. It really was okay despite the sauce being ketchup while it was still hot, but we did leave a couple of slices because our next order arrived and took most of our eating time, giving it a lot of time to cool. It wasn’t as good when that time arrived. 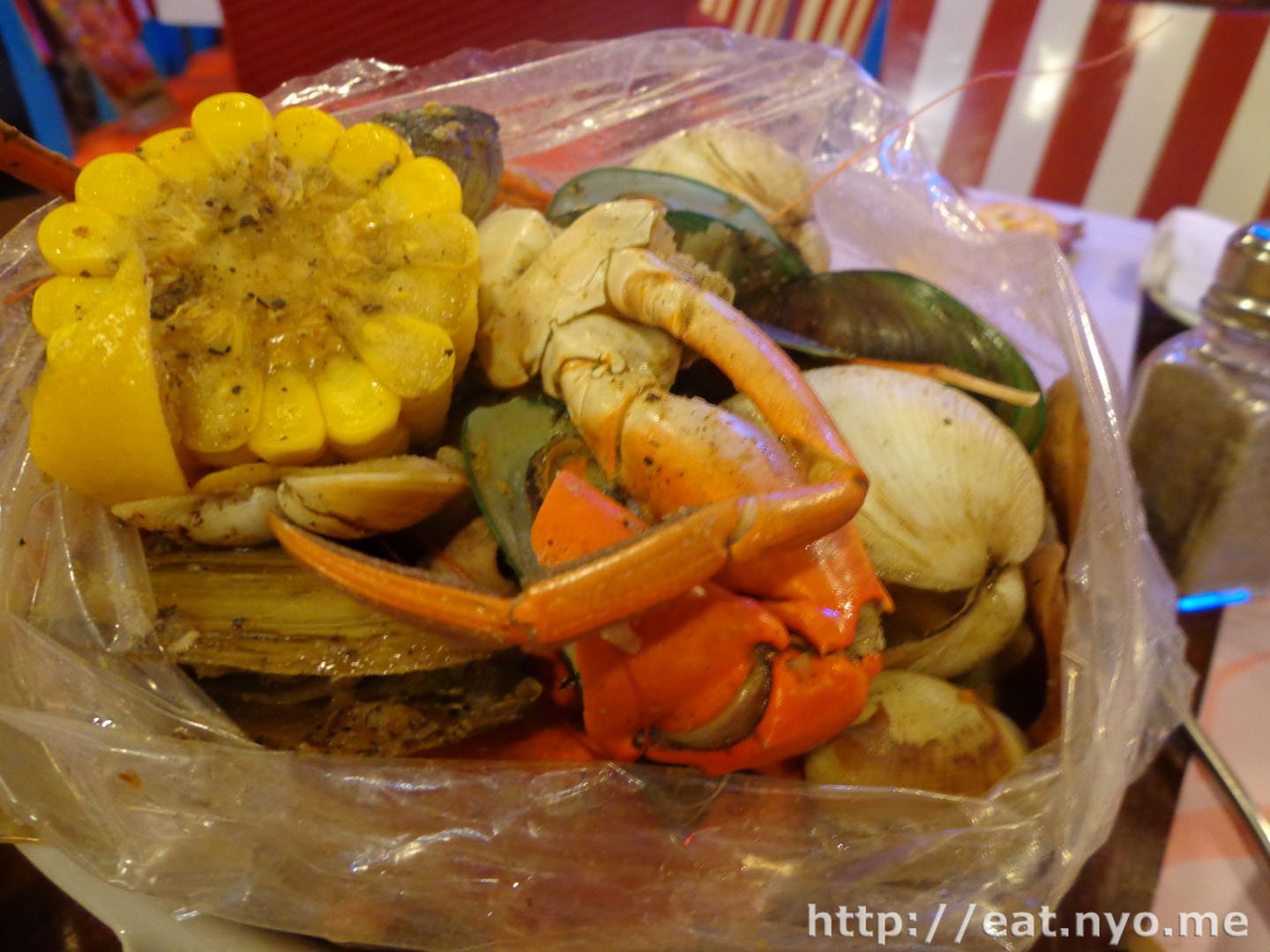 Speaking of our next dish, I guess this is also the last one for this blog post. Their Seafood Boiling Bag really did come in a bag. However, and perhaps thankfully, it wasn’t boiling when it arrived. It was still hot though. I’ve mentioned that it came with crab (yes, singular), shellfish, and shrimps. It also came with corn, potatoes, and Andouille sausage. The last one provided much of the flavor for the broth it was boiled in, which was very, very spicy. It wasn’t intolerably spicy such that it masked the flavors of the seafood, but it really was the primary flavor most of the meat had. It was all good, though, except for a few nuances: there was only a single crab, which, luckily, Beloved had me consume since she was too lazy to crack the shell; there was a muddy-tasting spherical shellfish that both me and Beloved had no idea what but both agree was the worst tasting thing in the bag; and some of the shrimps looked frighteningly (for Beloved) and hilariously (for me) mutated—they had huge, and I mean* huge* heads which was like 60% of the entire mass of the shrimp. I still ate them, and Beloved still asked me to de-shell the smaller, non-mutated looking ones.

All in all, it was an interesting experience. I’ve been mentioning to Beloved how I wanted to try out a seafood boil. Although this still wasn’t exactly it, it cut pretty close. Of course, I would’ve preferred more crab, especially since this was a crab-specialty place. However, even though we only got to try a single mud crab in the boiling bag, I found it satisfying, especially with the rest of the food we got to try. I’ll admit that it’s one of our more expensive ventures, but, like most of the seafood platters-slash-pots-slash-bags we had the opportunity to try, Clawdaddy was all worth the try.

Not recommended for: Frugal seafood haters.