Beloved, myself, and Const indulged at Papa Diddi’s a couple of weekends ago. This was after trying out a new place at Mother Ignacia which I will write about when we manage to get back there, for reasons I will explain once I write it. If you’ve been back-reading, you’ll know that we frequent this place a lot for their ice cream. The reason I’m writing this is they’ve added an annex to their original branch literally one store away that serves some new items that we decided to try out.

Well, we didn’t try it the time we introduced Const to this place. During that time, since we already ate, we just had our usual ice cream and coffee. Since we were regulars, we always see if there’s any new flavors. This time, there’s none that we’ve already tried, but there’s still a lot of varieties, especially now that there are two places to choose from that carries at least eight flavors per shop. They have three different offerings for their ice cream, varying in number of scoops. Both beloved and myself had an Indulgence (135 Php) each, their most expensive variant at three scoops where each scoop can be a different flavor. We also both had our favorite of their four coffee variants, their Sagada Coffee (95 Php). 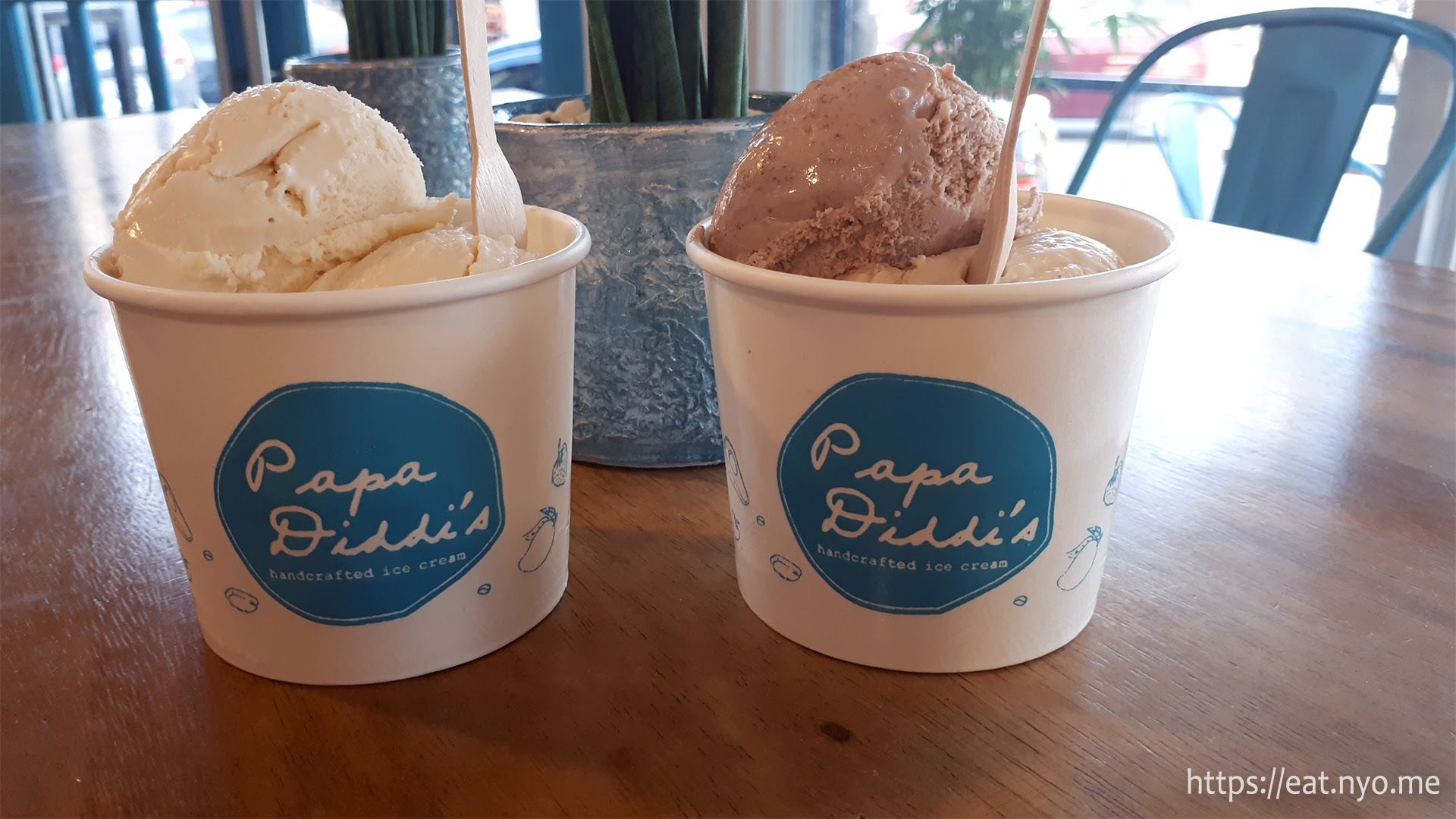 That day, they had some of the usuals that we already tried. My Indulgence cup at the left, which has three different scoops of ice cream, had Pinapple Rhum, Dulce Gato, and Cheese Closed. Beloved’s cup at the right had Peanut Butter & Jelly, Dulce Gato, and Davao Meets Bicol.

My tip to first-timers of this place is to take the flavors literally for their ice creams. Since the place uses fresh and all-natural ingredients, whatever the flavor they have on their ice creams is very prominent. For example, my Pineapple Rhum literally tasted like pineapple with a very mild punch. Dulce Gato had quite a milky taste. Cheese Closed tasted like a hard cheese turned into ice cream. Peanut Butter & Jelly really is like the sandwich, just in ice cream form.

I guess the only thing you have to decipher a bit from our orders is the Davao Meets Bicol. It’s Davao because of Malagos chocolate, which comes from Davao, and Bicol for chillies, which Bicolano food is famous for. Yes, it’s chillies and chocolate and both flavors are definitely prominent. I despise this flavor but it’s Beloved’s favorite. I noticed a lot of girls enjoy this flavor, but have yet to find men who would go out of their way to order this. 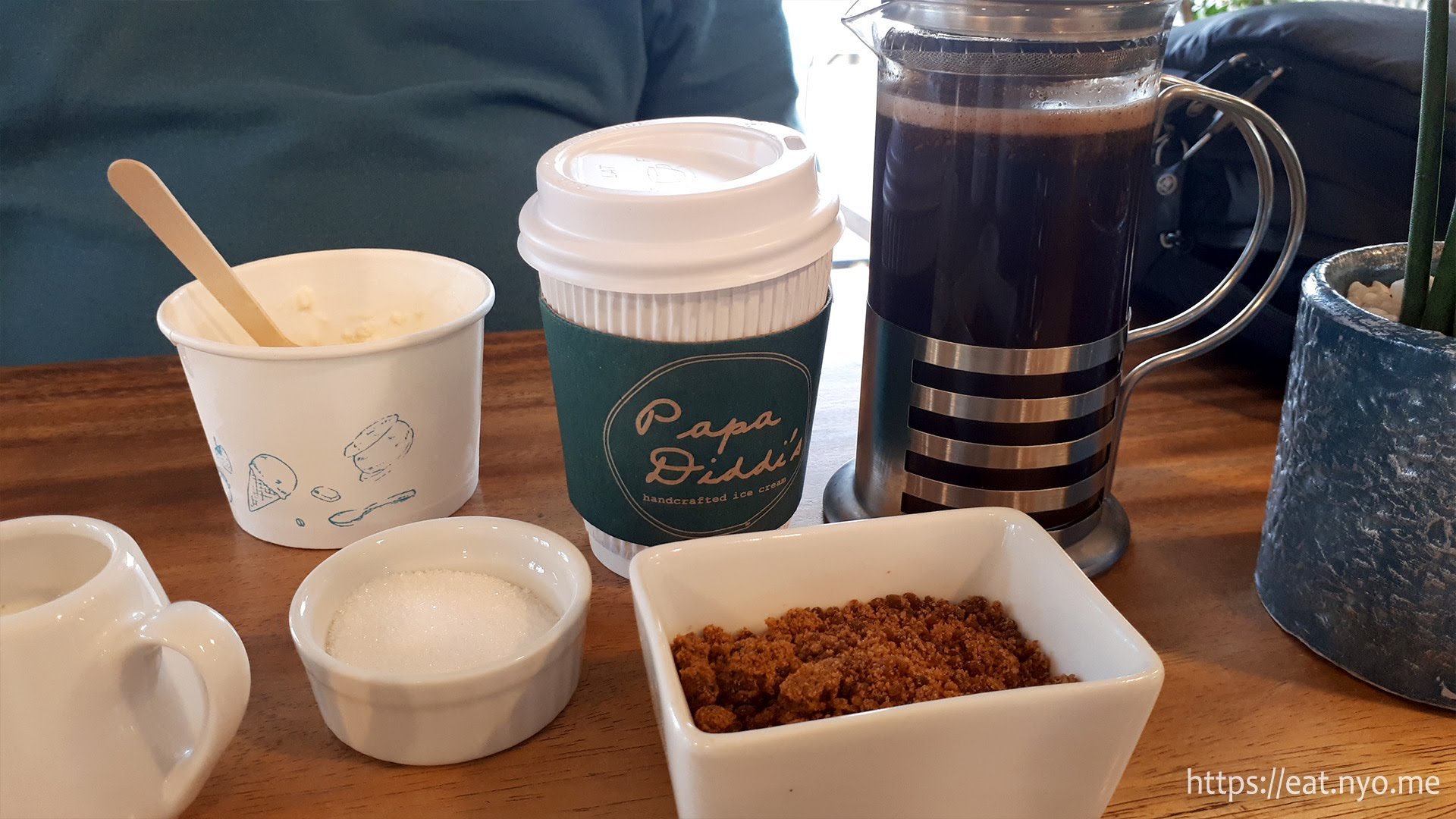 The reason we get their Sagada Coffee over their other variants (Barako, Benguet, and Kalinga) is because it’s got that roasted flavor that we enjoy without any metallic or acidic backdrop. While the others are quite nice too, this is the baby bear of our three (I guess four in this case) bears. The coffee is served in a French press, which you press down after four minutes for best results (something we learned from SGD Coffee). It’s also served with muscovado sugar and milk, the former I rarely use and the latter Beloved often uses. This is indeed a nice pair with the creamy dessert you’ll have here.

A couple of weeks later, we went back to try out their new food. Now, they used to have a bigger place at the building down the road that serves food as well, but the prices of their new food choices were much more reasonable. I guess they’re still experimenting which sells. Anyway, most of their new menu items were some sort of omurice or bagnet dish, or a combination of both, which was what I got—their Bagnet Omurice (185 Php); Beloved ordered their Adobo Omurice (175 Php). 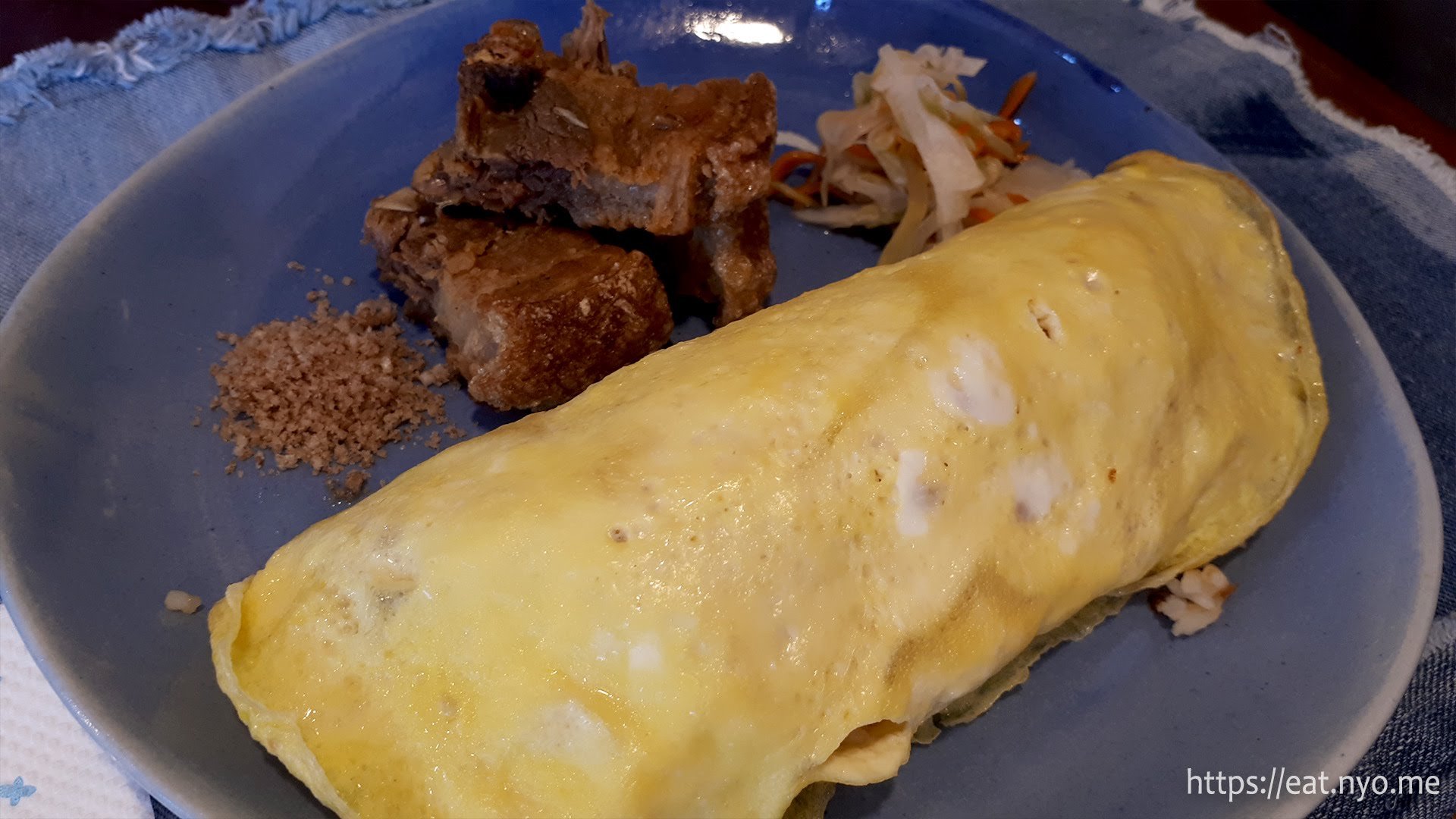 My Bagnet Omurice had a couple of blocks of the aforementioned bagnet with a generous amount of rice covered in omelette. It was also served with atchara (pickled papaya) and some sort of salt. I asked for ketchup which went well with the settled egg. The rice was fried, but didn’t have much in terms of flavor. While the bagnet was decent in crispiness and expected taste, I found the amount of it a bit too little. 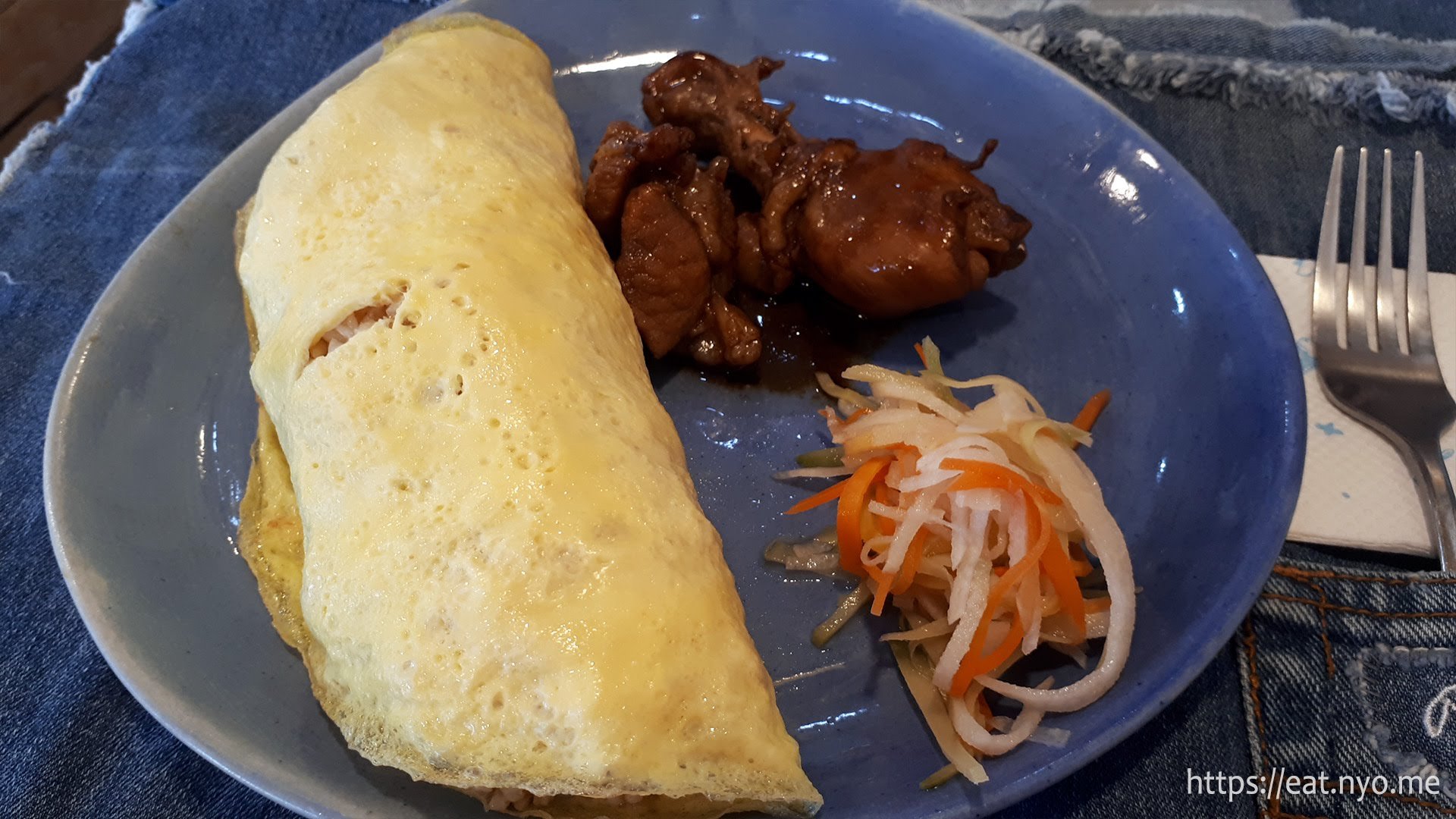 Beloved’s Adobo Omurice had a cut of chicken adobo and a couple of cuts of pork adobo. It’s your typical salty-vinegary adobo. The chicken adobo was quite fine, Beloved comments. However, she found the pork too fatty. While both meats tasted as you would expect, they were similarly too little in amount as my order.

After eating, we went to their other store to check the available flavors there, since their “newer” place had less offerings for their Ice Cream. They had some new mango offerings, which I was eager to try. Again, we ordered their Indulgence (135 Php), one for each of us. This time, I chose their Mango Ginger (not new), Platanos Con Leches (not new), and Cinnamon Basil with Mango Compote (new). Beloved got their Bukayo, Tres Leches, and Coffee Addiction all of which were “old” flavors that Beloved enjoys. 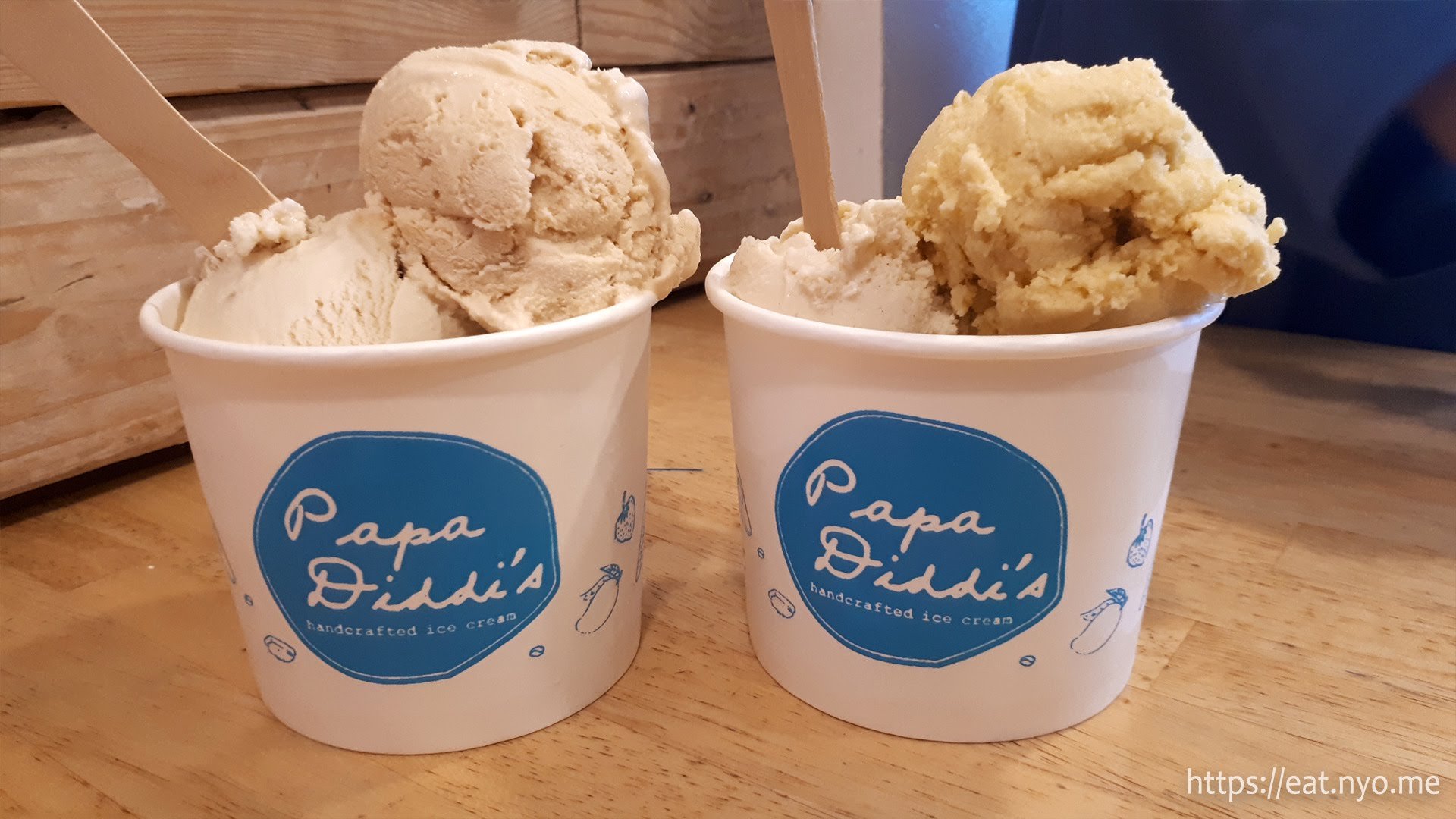 Note that the rating below is for Papa Diddi’s Handcrafted Ice Cream and not the rice meals that we tried. I cannot recommend their hot meals when there’s a lot of better alternatives in a walkable distance. Unfortunately, at the moment, they still haven’t found the right formula for their hot dishes. However, there’s definitely nothing that comes close, near or far, to their locally-sourced and freshly-made ice creams, which their formula they have already perfected—and they’re even coming out with more formulas as seasons pass. You can also complete your dessert with their similarly locally-sourced and freshly-prepared coffees. If you enjoy ice cream, I guarantee you’ll find something you’ll love in Papa Diddi’s. And if you don’t find one, they will definitely invent one in the future, making this place a must try.

Not recommended for: Ice cream haters.

Smart nomnomnom tip: Free to taste before buying if you’re not yet familiar with the flavors.