While at Greenbelt a couple of days ago, beloved and I found ourselves having a late lunch at Pepper Lunch. Apparently, this is the restaurant is what borne Sizzling Pepper Steak that we frequent a lot. According to beloved, this restaurant uses superior quality ingredients so I should expect premium prices. Similar to Sizzling Pepper Steak, this is a Japanese teppanyaki restaurant where they put meat on a hot plate and you do the “cooking” on your table. Anyway, because we were in the area and most of the restaurants were closed in the afternoon, we ended up going here.

Unlike Sizzling Pepper Steak, Pepper Lunch uses a fast-food style counter to take orders. While I expected a huge price difference, it wasn’t really that much with their non-premium meat. Their Beef Pepper Rice, which is a common item on the two comparable restaurants, are priced equally. We didn’t order that, though. Beloved got for herself their Curry Beef Pepper Rice (218 Php). As for me, I took one of the premium items seeing as I probably won’t be going here again and wanted to make the best of it. I ordered their Shimofuri Pepper Steak (610 Php), which I don’t have any idea what it means but I liked how the beef has a lot of marbling so I got that. I also got their Yakiniku Sauce (30 Php) for the heck of it. For our drinks, beloved got for herself their Orange Juice (40 Php) and I had Hot Green Tea (40 Php), both are given right away from the counter fast-food style. 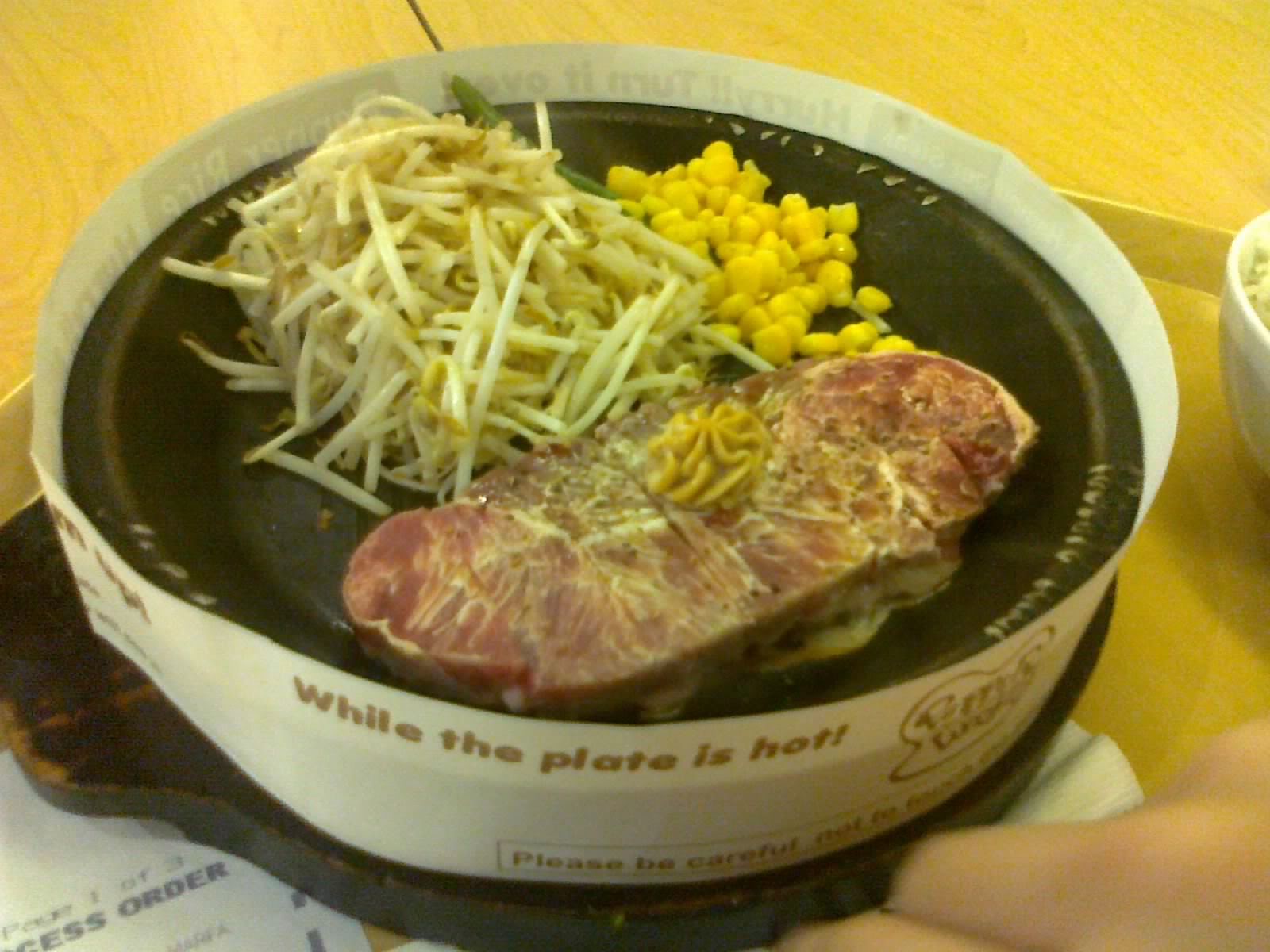 We did have to wait a short while for our meals. But when mine came, it came sizzling and raw. My beef was a decent serving, perhaps not for the price, but was for the plate. Also, the amount of fat marbling in it was extremely apparent, which made me happy. The vegetables that come with it were simply bean sprouts, string beans, and corn. Learning from a past lesson with regards to teppanyaki, I immediately spread the butter on the meat, poured in my yakiniku sauce, and began mixing up my plate. 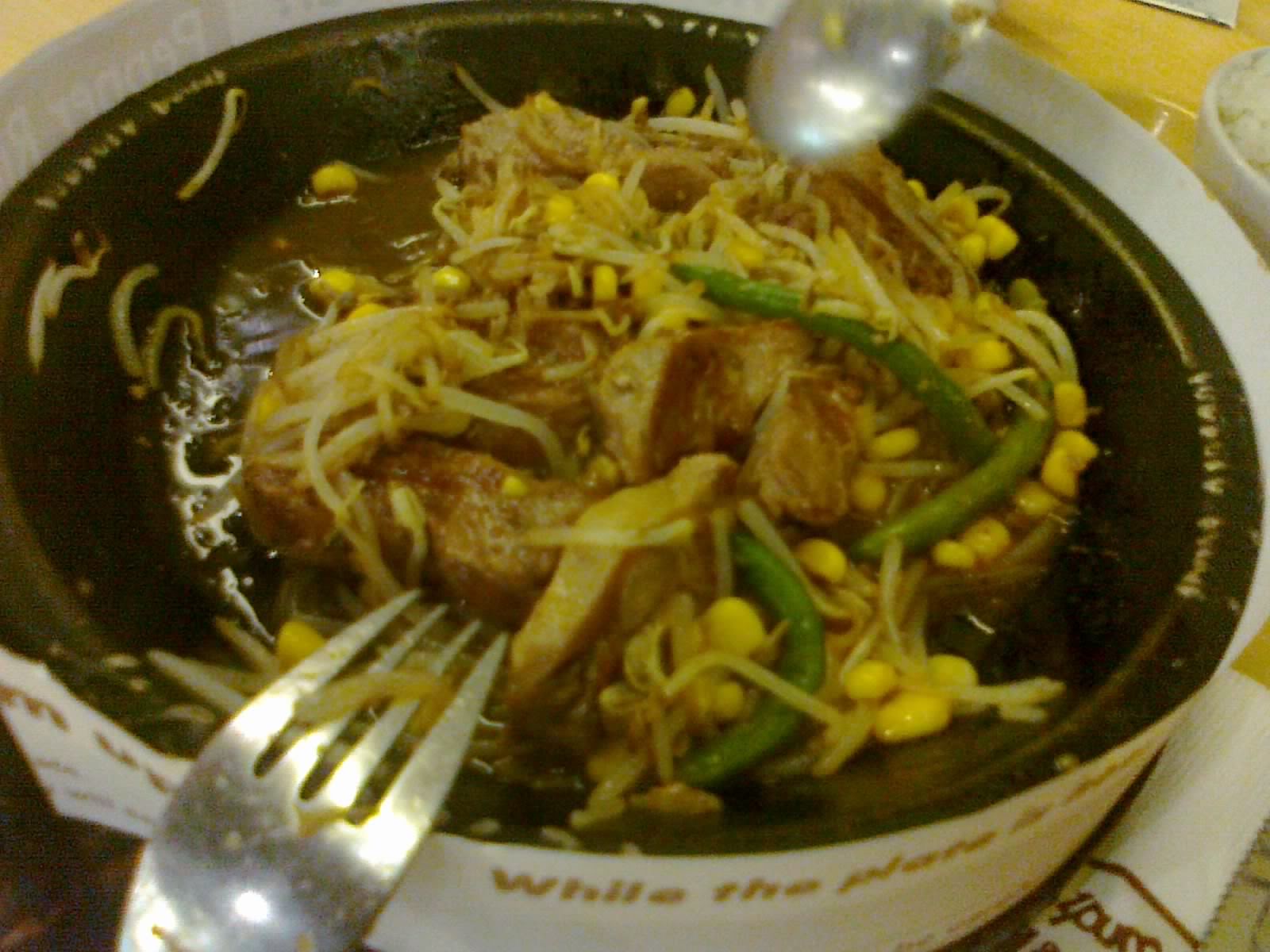 When the sizzling subsided, I find myself in front of an edible plate. Apparently, the paper wrapped around it shows instructions on how to cook your food, which, luckily, I did right. As for how it tasted, well, the meat itself didn’t really taste anything special other than slightly peppery, much less than the one at Sizzling Pepper Steak. However, it was extremely juicy—perhaps one of the juiciest pieces of beef I’ve ever had. It’s so juicy that each bite releases a river of meatiness in my mouth. Although I did say the taste wasn’t special, the yakiniku sauce I ordered pleased my palate. The veggies provided for crunchy palate cleanser that made me want more beef. Sadly, it all disappeared before I knew it. Oh, I forgot to mention that the plate came with rice. I took the opportunity to taste their non-yakiniku sauces that’s on every table. Their honey one was obviously sweet and the garlic one tasted a bit on the salty side. The yakiniku sauce I had, in comparison, had a wonderful sweet-smoky flavor. 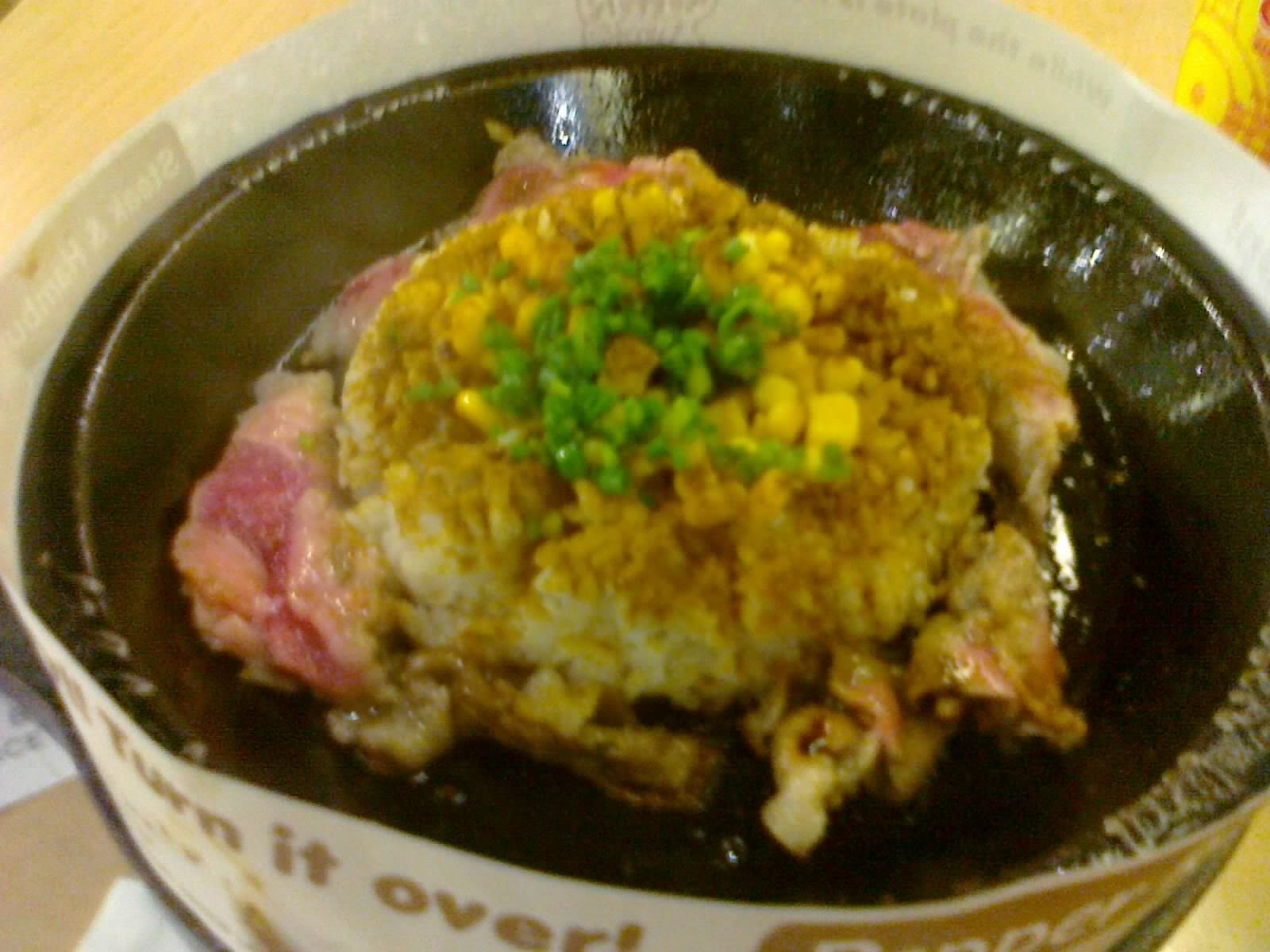 Beloved’s order was raw as well. It had the rice in the center, covered in the curry sauce, surrounded with meat. She also immediately went on to the mixing. I don’t remember if she put in any sauce, but I guessed the curry can make for the lack of it. 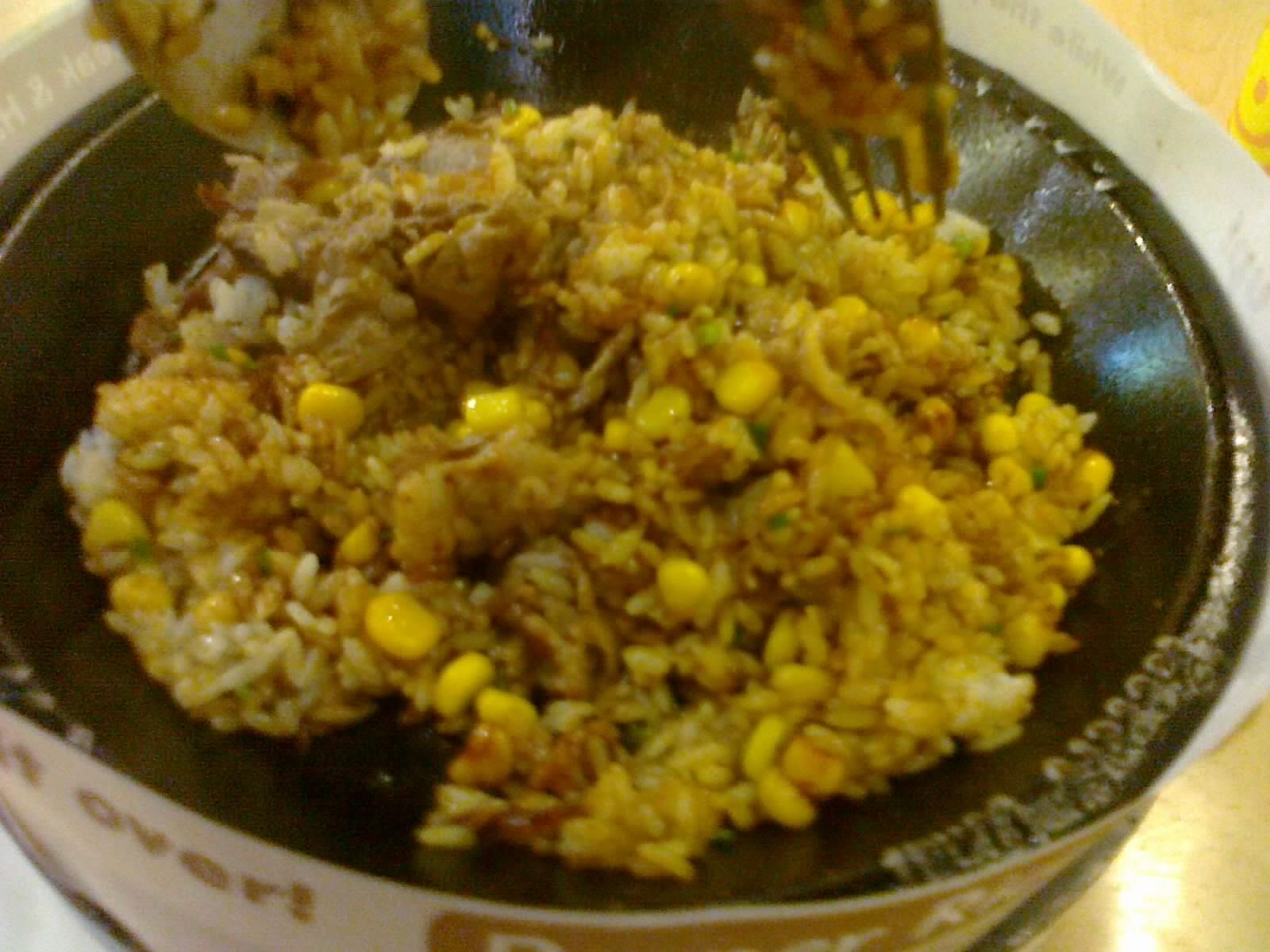 And it did. In fact, this didn’t seem like pepper rice—it felt and tasted more like curry rice. The beef was a bit tougher than how we would’ve wanted, but I guess it was okay. The curry was the star of this plate.

I guess I was pretty surprised with both the similarities in the prices and differences in the meat between Pepper Lunch and Sizzling Pepper Steak. Serving-wise, prices considered, they were practically the same. However, while the latter serves a slightly cooked and overly peppered teppanyaki, the one here is served practically raw. While my plate could’ve used more meat, it was a pretty fat meat. And although it was highly priced, the amount of marbling it had and the juiciness it produced made up for everything. All in all, this is certainly a formidable competitor to Sizzling Pepper Steak and other teppanyaki restaurants I haven’t heard of in the Metro, considering their non-special items in their menu. Perhaps the only reason for me not favoring this would be the lack of bacon.

Smart nomnomnom tip: Mix it all up as soon as you can to avoid overcooking.