Beloved and I had dinner, or breakfast in my case, at Chicken Charlie. This fried chicken place is often compared to BonChon Chicken; its followers say that this is the original one, the first incarnation a long time ago at Banawe. I apologize beforehand for comparing Chicken Charlie to BonChon throughout this review, but since they are quite similar, it cannot be helped. Anyway, I haven’t been to this place before, but from what I’ve heard, the chicken here is pretty good.

Its Katipunan branch is located at the second floor of the Oracle Building, making it slightly inaccessible compared to other food places on the street. I’m hoping this is the reason why when we went in, only one table other than us is occupied. Similar to Bonchon Chicken, they serve chicken bundles by the cuts. However, this place only serves drumsticks and wings. Although they also serve set meals, such as two drumsticks, rice, and drink, my quick math told me that ordering the bundles would be better. So we ordered their 4 Pieces Drumsticks + 4 Pieces Wings Combo (315 Php). Their chicken comes in either Soy Garlic or Hot Sweet sauces. We took half of each. We also got their Fries (39 Php) and Beloved got a cup of rice for 17 Php. 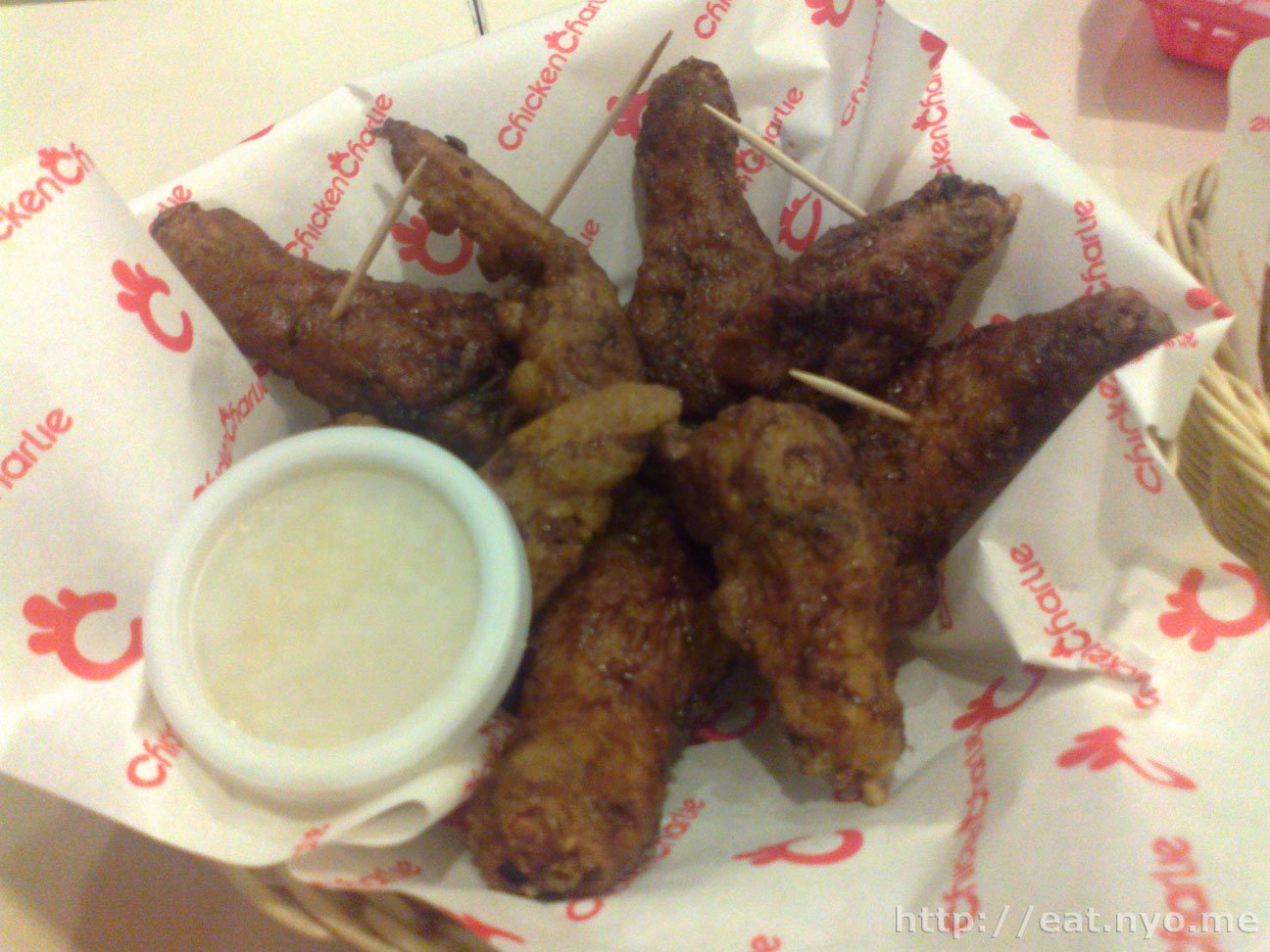 Since this is what it’s all about, I’ll begin with it. Above is the 4 Pieces Drumsticks + 4 Pieces Wings Combo. Those with toothpicks are the Hot Sweet ones. They were noticeably smaller than your usual fast food chicken, especially when you compare them to the ones in Popeye’s or Ministop. However, after biting into the Soy Garlic one, I found out that this is among the tastiest pieces of chicken I’ve ever eaten. Similar to Bonchon Chicken, the crispy skin has most of the Soy Garlic taste. However, the meat must be praised even more. It’s the least greasy yet most tasty chicken meat I’ve eaten. Perhaps it’s because of the choice dark meat cuts, but it really has that “chicken” flavor. The Hot Sweet ones were very good too—the heat is very tolerable and the sweetness makes it just right. 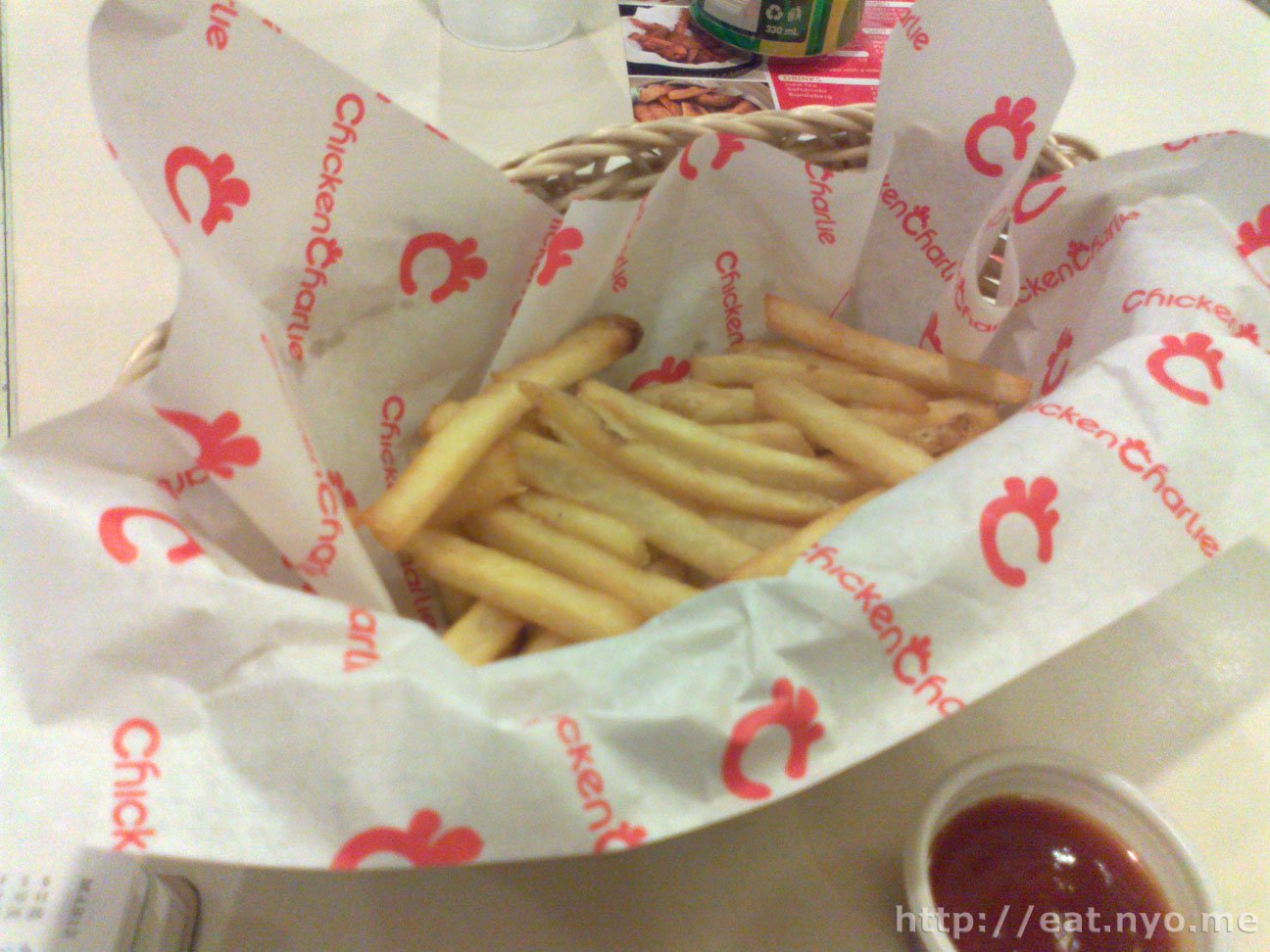 Here is their Fries. Unlike most fast foods, this one’s made of yam (kamoteng kahoy). Although for the price range I found it lacking in quantity, similar to their chicken, this is among the best tasting fries I’ve eaten. Because they were cut thinly, the crispiness that I enjoy with my fries is present. 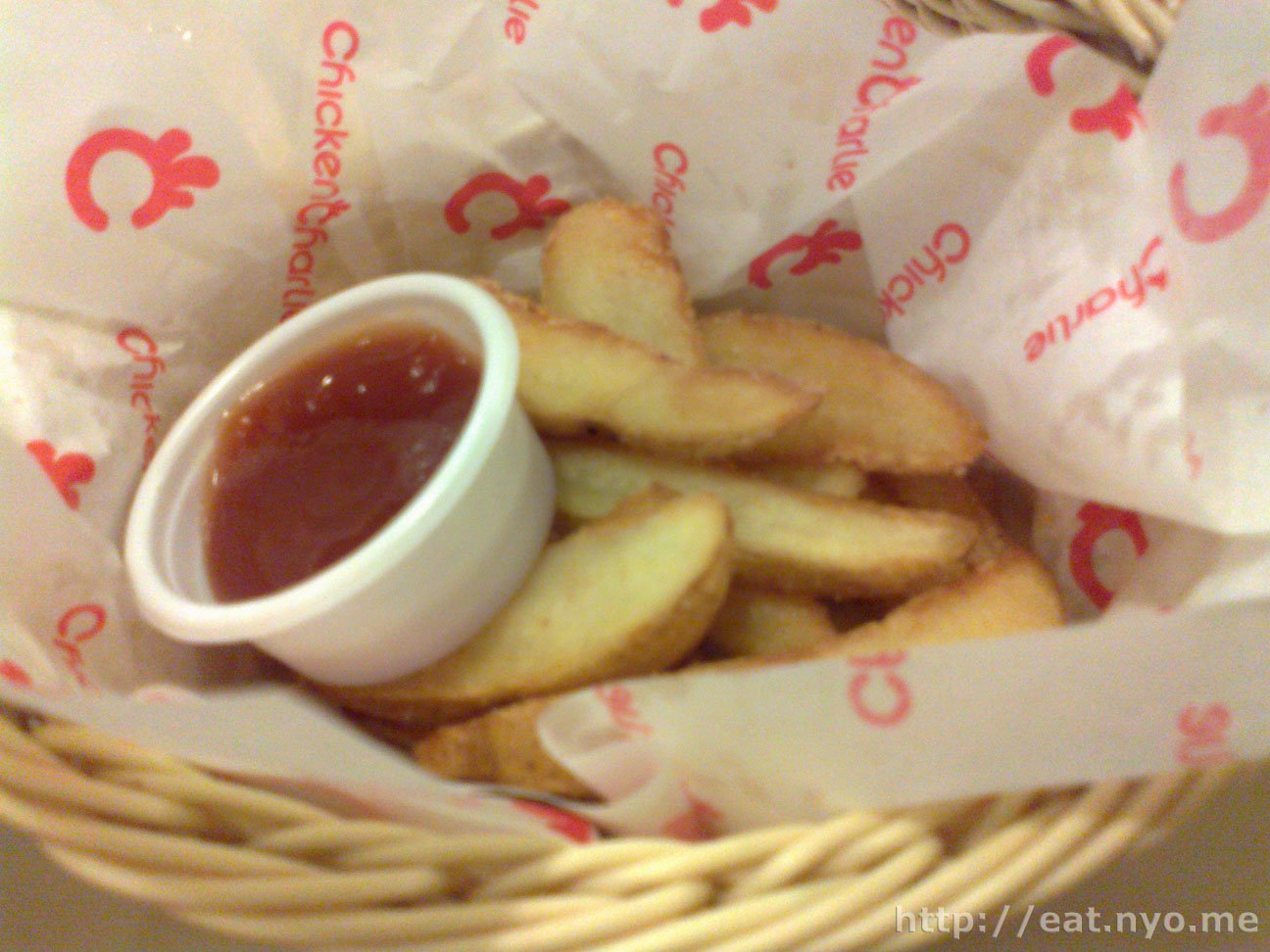 Because we enjoyed their Fries so much that we ate it all before the chicken arrived, we also ordered their Wedges (49 Php). This is also made of yam. Unlike the fries, though these were thick wedges of said root crop. While this time I agree with the quantity-to-price ratio, because they were pretty thick, it wasn’t as crispy as I’ve wanted. However, those who want a fluffy-on-the-inside potato substitute will be very happy with this one.

The chicken here is better than Bonchon Chicken, period. Although the taste of the skin and style of cooking is pretty much similar, the meat of the chicken here is simply superior. And we got to eat a lot for less than 500 Php. To sum it up, I was very happy with our meal. The big downside, which is why I can’t give this more than one thumb up, is you only get to choose between the less meaty (but more tasty) cuts, and other than chicken and yam and, I believe, fish, you don’t have other choices. If you’re one of the “BonChon addicts”, I urge you to try this place out, and I’m sure you’ll be instantly converted to Chicken Charlie.

Not recommended for: White meat lovers.

Smart nomnomnom tip: Combos are cheaper than meals, so come in a group.