Beloved and I had dinner a couple of times at Brooklyn Pizza, Tomas Morato. We always pass over this place whenever we go to Tomas Morato for other food adventures. Lately, I’ve been wondering why. I’ve heard little about this place, but from the outside, it looked like a decent enough pizza parlor that serves Buffalo wings. After Googling up their menu and finding out their somewhat reasonable price tag, we finally made time to try it out.

As I’ve mentioned, their prices were not too steep for a pizza place. We were even luckier the first time we went because they had a promo that features most of their menu. Their Barkada Summer Promo, priced at 799 Php, offered a choice of some of their 14” pizzas, a choice of some of their pastas, an order of Buffalo Wings, and 1.5 liters of Pepsi. Although there was just the two of us, and I would’ve forgone the included beverage, this was too good of a deal to pass. So we settled for their Vegetarian Pizza and White Shrimp Pasta. 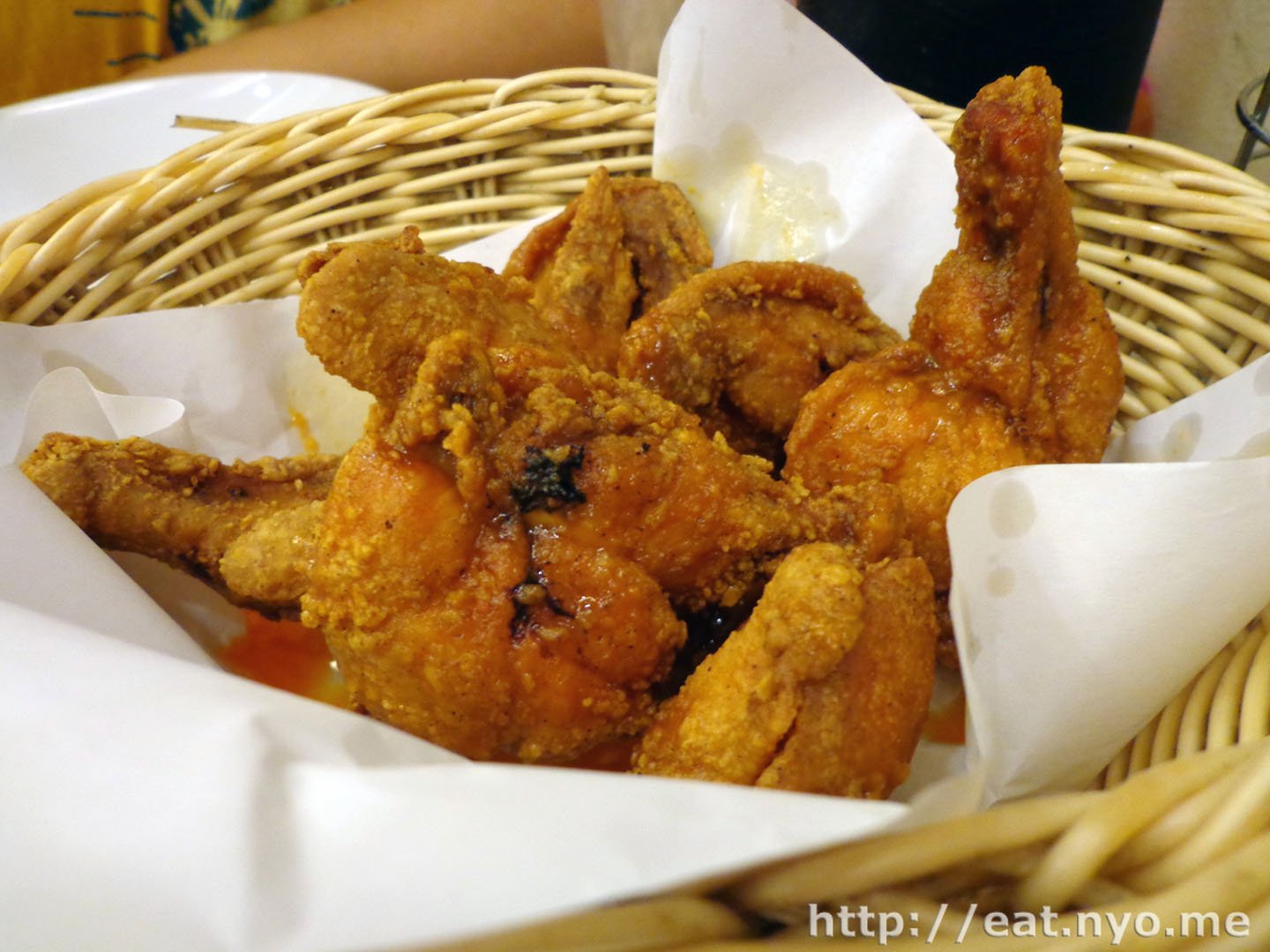 Although this is an American-style pizza place, I must feature their Buffalo Wings. I rarely have these, and when I do, they are either a.) too spicy, b.) chicken’s under/overcooked, c.) too sour, or d.) any combination of the three. These were done just right, almost perfectly. The chicken’s cooked through, with the meat falling of the bone, yet the skin’s golden crispy and not burnt. The sauce was the perfect balance of spicy and tangy, and nothing “too” on either ends of the palate spectrum. Overall, among the best-tasting chicken wing dishes I’ve had. The only thing missing was some sort of sauce, which, although was not particularly needed on this case, would’ve been a lovely afterthought. 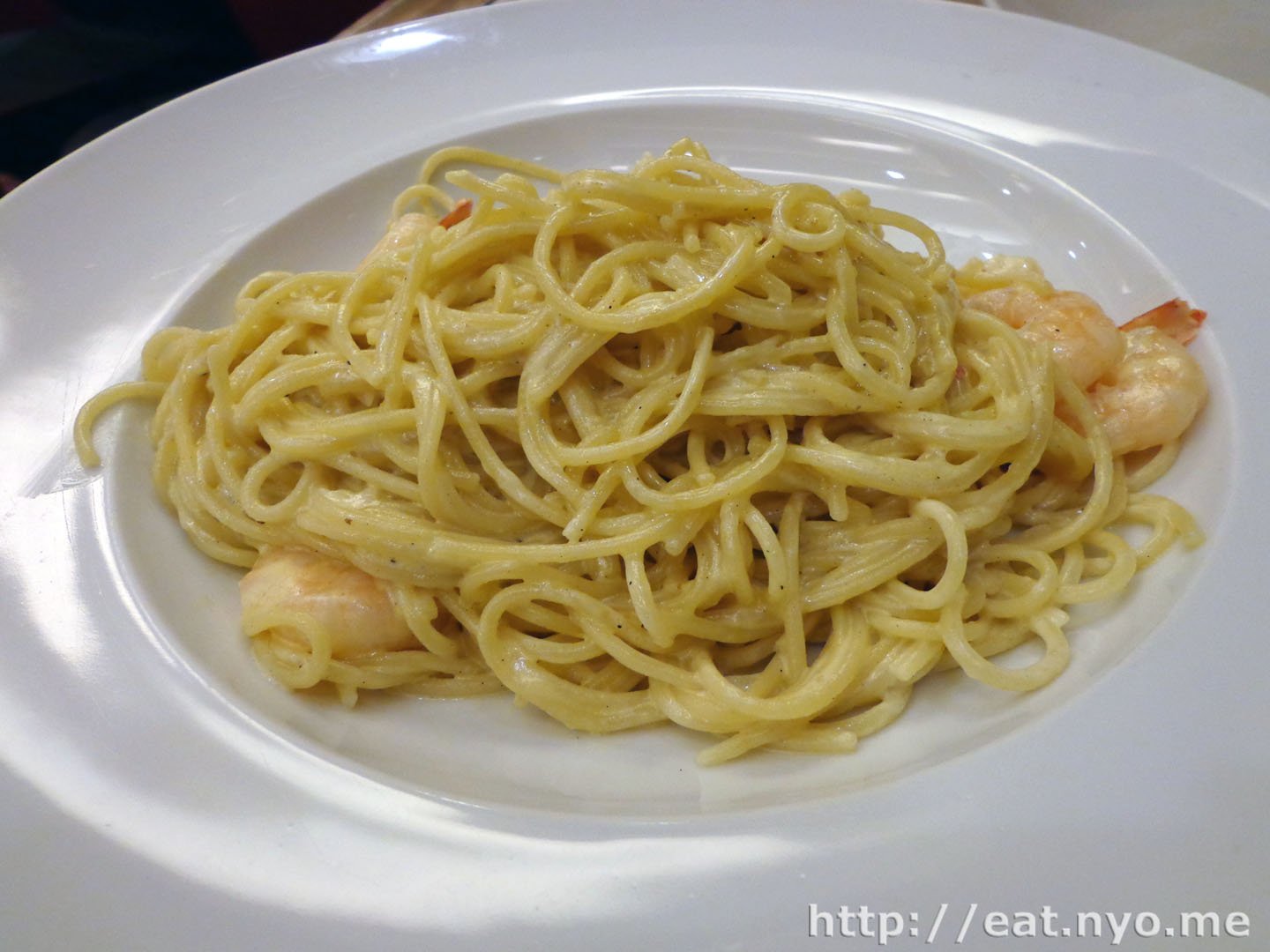 Our pasta order, their White Shrimp Pasta arrived next. If you’ve been following me, you know I’m not really fond of pastas that aren’t the puttanesca kind. This falls flat for me as well—not because I’m not fond of it. On the contrary, I love shrimp, and thought I would’ve at least enjoyed that. Okay, I did, but there were only five measly pieces of them. The serving was also quite decent, and it could’ve easily served two, maybe three or four. What bothered me was the sauce. Sure, it’s the usual creamy white sauce that goes with most carbonara dishes. However, this was noticeably oily. Now, I don’t mind oil in my pasta, if there’s no cream in it. Sadly, oil and white sauce in this one both literally and figuratively just didn’t mix. 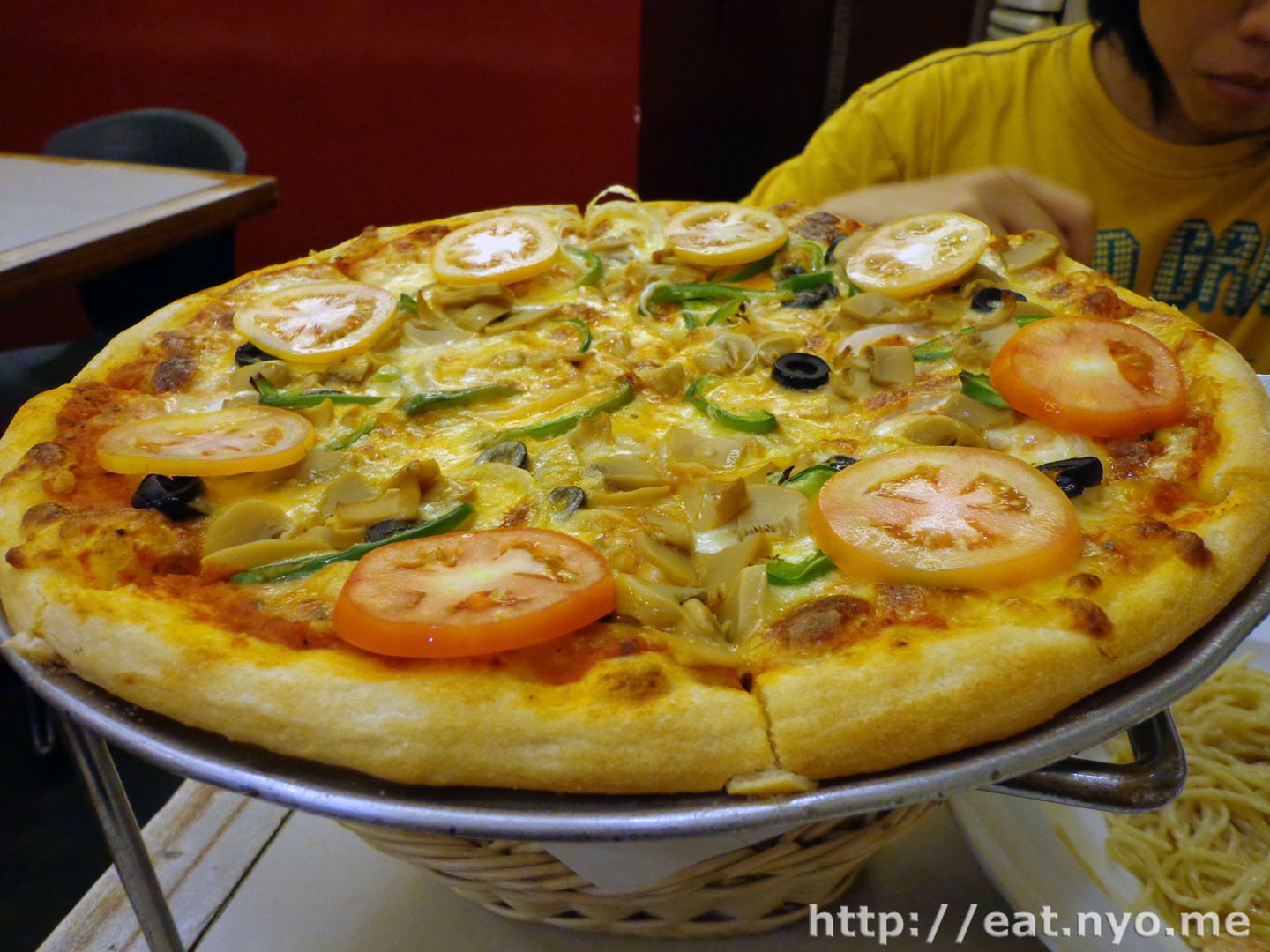 One hit, one miss. How was the pizza—their Vegetarian Pizza, to be exact? Excellent. The crust was simply wonderful. It’s thin and crisp, just the way I like my pizza. The cheese they used was quite stringy too, adding more to the already wonderful texture. I also enjoyed the fact that we chose their vegetarian variant, as the veggies they used were actually quite fresh, and it didn’t overcrowd the pizza like some places do. In case you can’t decipher from the picture, the exact veggies they used were tomatoes, black olives, mushrooms, red and green peppers, and onions—usual veggie pizza toppings. But, really, what makes the dish was the crust. Oh, and did I mention that this one’s a fourteen-incher? This could easily serve four.

It took us a couple of weeks before coming back, mostly due to bad weather. When we did manage a second visit, the promo was no longer there. No biggie—as I’ve mentioned, their prices weren’t really that steep. This time, we ordered their Red Carbonara (225 Php), because Beloved wanted to try their red pastas, White Pizza, and Porko (460 Php), the latter also a 14” pizza. Why two pizzas? Well, you can mix and match pizzas, up to two with their 14 inchers and up to eight individual slices for their 18 inchers. Prices are matched with the most expensive item, I think. The White Pizza alone was 430 Php, but Beloved wanted something meaty in the pizza. Oh, we also ordered their Buffalo Wings (185 Php), which still received the same positive response, just slightly less novelty. 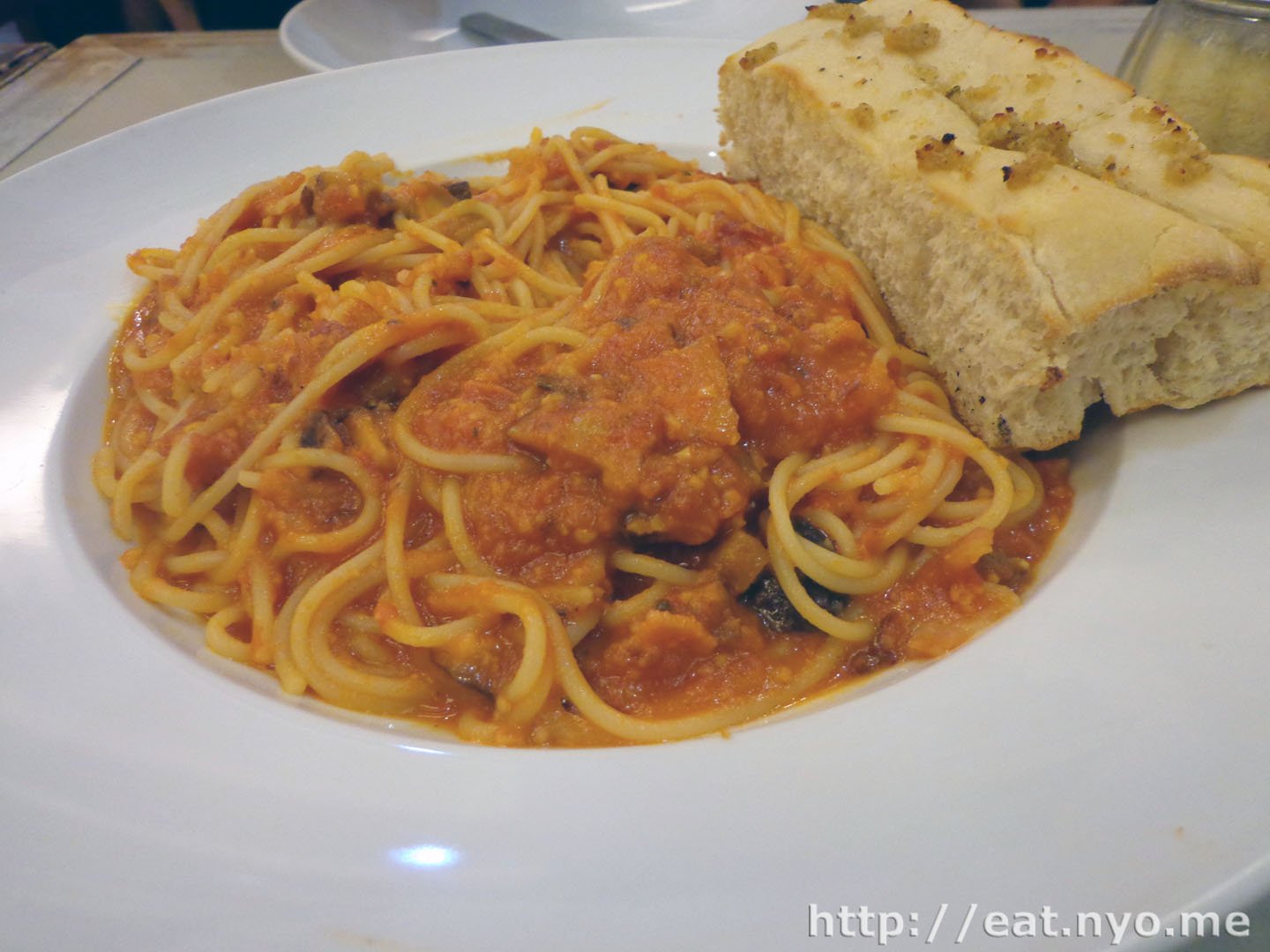 This time, both of us enjoyed their Red Carbonara. This had the usual carbonara ingredients of bacon and mushrooms, except they used shiitake mushrooms over the usual button. Oh, and the sauce was red, made from the usual tomato base. It was a nice, unique combination that, this time, worked, maybe because it didn’t have too much oil, or if it did, it mixed well with the sauce this time. Of course, Beloved and I fought for the bits of shiitake that this pasta featured, but there was honestly a lot of them to share among two. 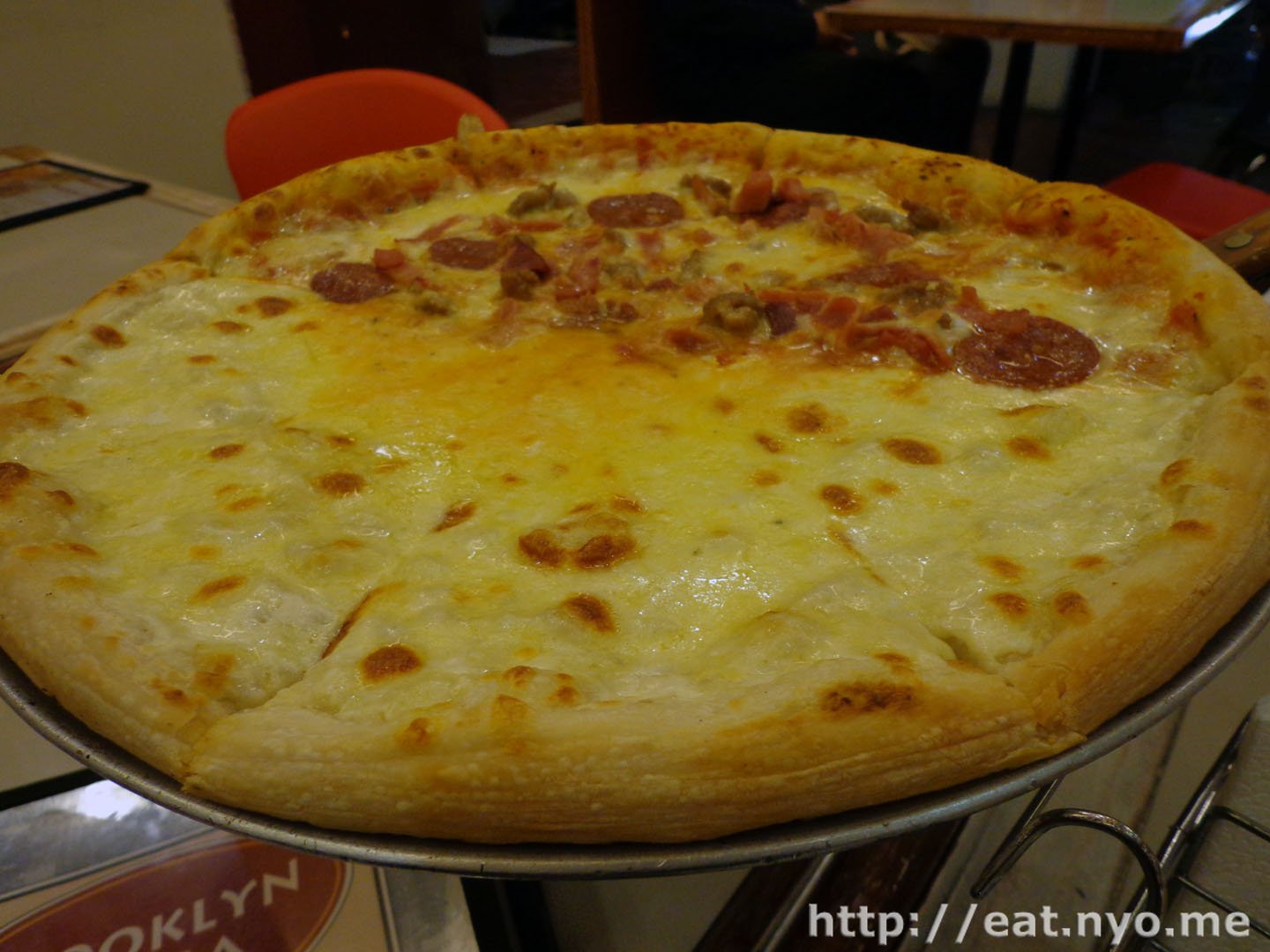 Finally, our double pizza order—White Pizza and Porko. I’ll let you figure out which is which. The White Pizza is a three-cheese pizza featuring the staple Mozzarella plus the not-so-unusual Parmesan and the uncommonly used Ricotta cheese. And I thought it couldn’t get better. It’s hard to decide which made the dish superb—the still wonderful thin, crisp crust or the creamy combination of cheeses, mostly carried by the creamy Ricotta. As for the Porko, it was underwhelming in comparison. If it weren’t for the crust, I wouldn’t have eaten more than one slice. The meat, or, more accurately, pork included were sausage, pepperoni, ham, and bacon. Yeah, I’m not really fond of pure-meat pizzas as they usually cloy after a slice or two.

Our second trip cost us a little more than 1000 Php. The initial promo sure was a cash saver, but the choices were quite limited. And it doesn’t matter, since both times, we took home half of our pizza. Of course, it was no longer crunchy by the time I got hungry again, but leftover pizza is delicious pizza. Perhaps we should’ve gone for the per-slice approach, but I still feel both times were pretty decent deals. I’m, of course, comparing to the nearby competition. I’ll go as far as saying I quite like the crust here perhaps as much as my favorite thin-slash-crispy ones served at Shakey’s. Maybe Shakey’s just has an edge toppings-wise, but, really, pizzas are all about the crust, and perhaps the cheese. And they did a pretty good job with their only-cheese pizza. Overall, I’m quite pleased with both visits to Brooklyn Pizza.

Not recommended for: Pizza, Pasta, or Buffalo wings haters.

Smart nomnomnom tip: Leftover pizza, although not as crisp, is still delicious pizza.