Beloved and I had dinner at Ikkoryu Fukuoka Ramen a couple of times the past month. This relatively new ramen place is located at the relatively new East Wing of Shangri-La Plaza. This took a while in the making due to busy work schedule, but I won’t bore you with the details. This is perhaps the most popular among all the restaurants that opened up here. Since the first day we passed this place, there was always a waiting queue. I assume this must mean something great, so I was quite eager to try it out.

Luckily, the first time we went, we didn’t have to wait at all. We were immediately accommodated with the last table for two and were presented by a pretty straightforward menu. Half of it was dedicated to their ramen. All of their ramen were tonkotsu or pork bone broth ramen. The only place I know of that serves this was Ramen Bar, so I immediately thought of comparing it against that, especially with somewhat premium prices. Their most affordable was priced at 330 Php, which was a bare-bones tonkotsu ramen. I didn’t want that, of course, and chose to order their Chasyu Tonkotsu (380 Php). Beloved ordered their Black Garlic Tonkotsu (380 Php). When we placed our orders, we were asked how hard we wanted our noodles. I was surprised as I always assumed everyone wanted their noodles firm. The choices were hard, very hard, and normal. I assumed “hard” was firm enough so we both chose that. We also ordered their Gyoza (150 Php) for sides and Sea Salt Caramel (100 Php). The former was a substitute to their daigaku imo, which I would’ve preffered over gyoza. They were out, unfortunately. The latter intrigued me because it didn’t have “ice cream” like the rest of their dessert choices, so I assumed this was just caramel. Our waitress clarified that this was indeed ice cream, and it disappointed me a bit. 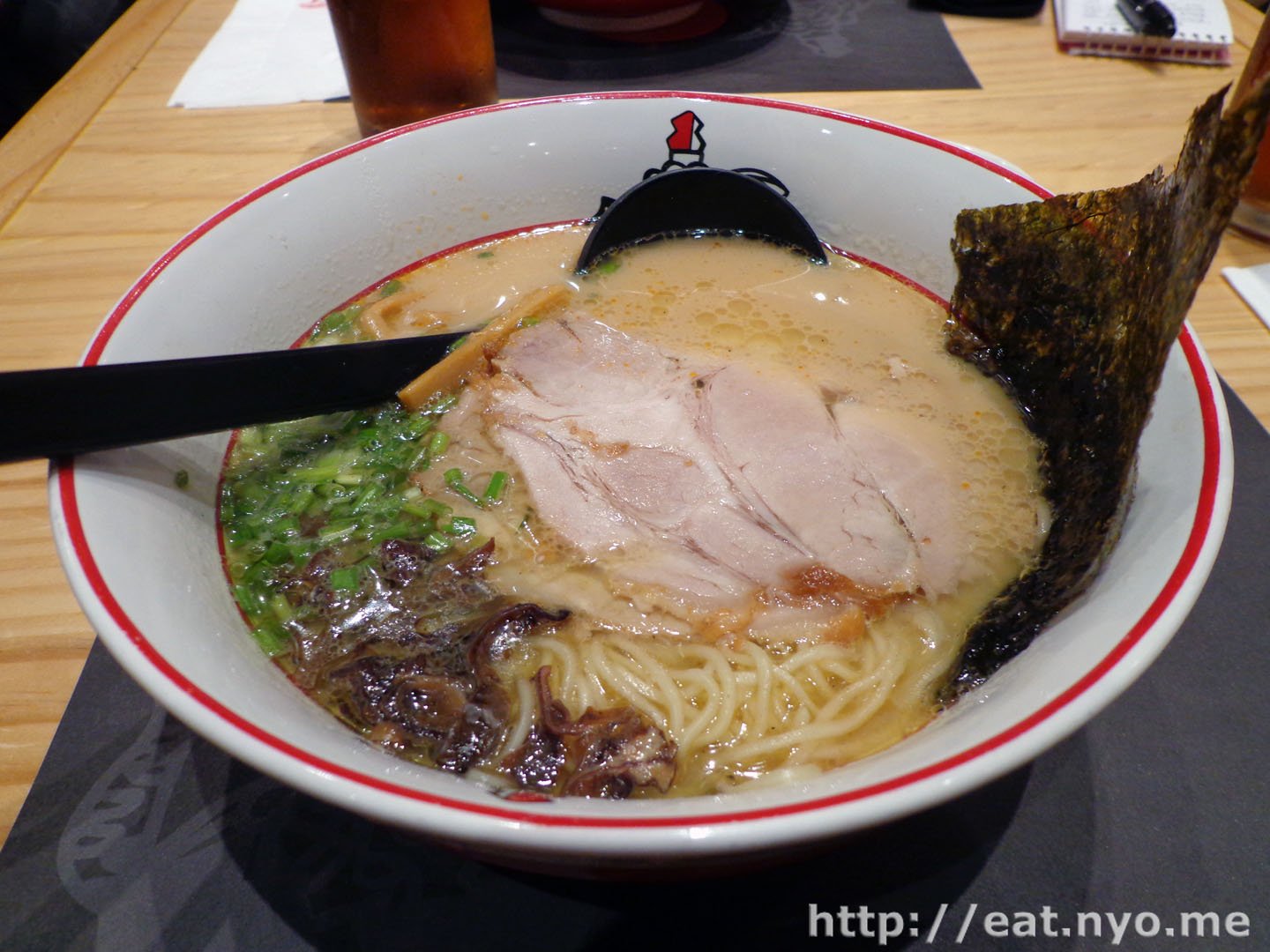 That disappointment was immediately erased upon arrival of our orders. My Chasyu Tonkotsu was so fragrant that I wanted to dig in without taking a picture. Aside from the aroma, the first thing I noticed was the color of the broth. It had an almost opaque color that you cannot see most of the noodles. My first slurp confirms that this is the most awesome broth I’ve had from any ramen place. It had a very rich, savory broth with no excess saltiness or unwanted flavors. Now, maybe it’s because the broth was so awesome, but I found it to be the only noteworthy aspect of the bowl. Sure, the first few bites from my noodles had that nice firmness and was certainly cooked through. Sadly, maybe because the broth was still hot, it cooked even more as I was savoring it and it turned a bit mushier than I would like. The chasyu, or barbecued pork (at least, that’s what I expect it do be) did not deliver. In fact, I didn’t find any pork bits that had any smokiness to it. Perhaps, again, I should blame the broth (or maybe my partiality to the amazing chasyu of Ramen Bar). Other toppings included regular pork, seaweed, and bamboo shoots, along with the usual chopped green onions. Again, they just didn’t harmonize as I would’ve wanted with the amazing broth. 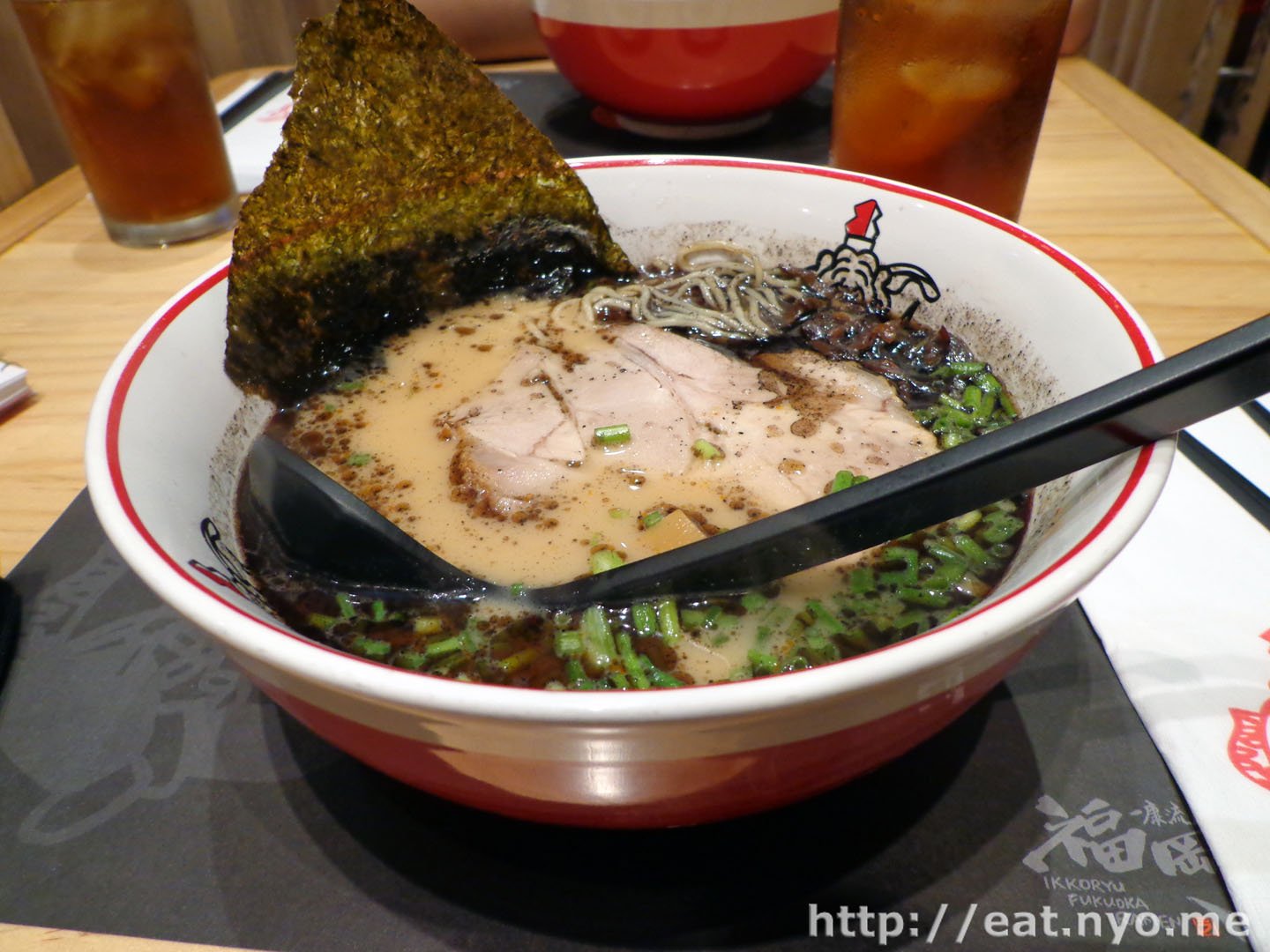 Beloved’s bowl was similar to mine minus the barbecued pork and the ominous outer black liquid that covered the tonkotsu broth. Her Black Garlic Tonkotsu was just as promised: black (once mixed) and garlicky. She liked her broth, but admitted that mine was better. She also shared the same sentiments that the noodles became mushy after a while. 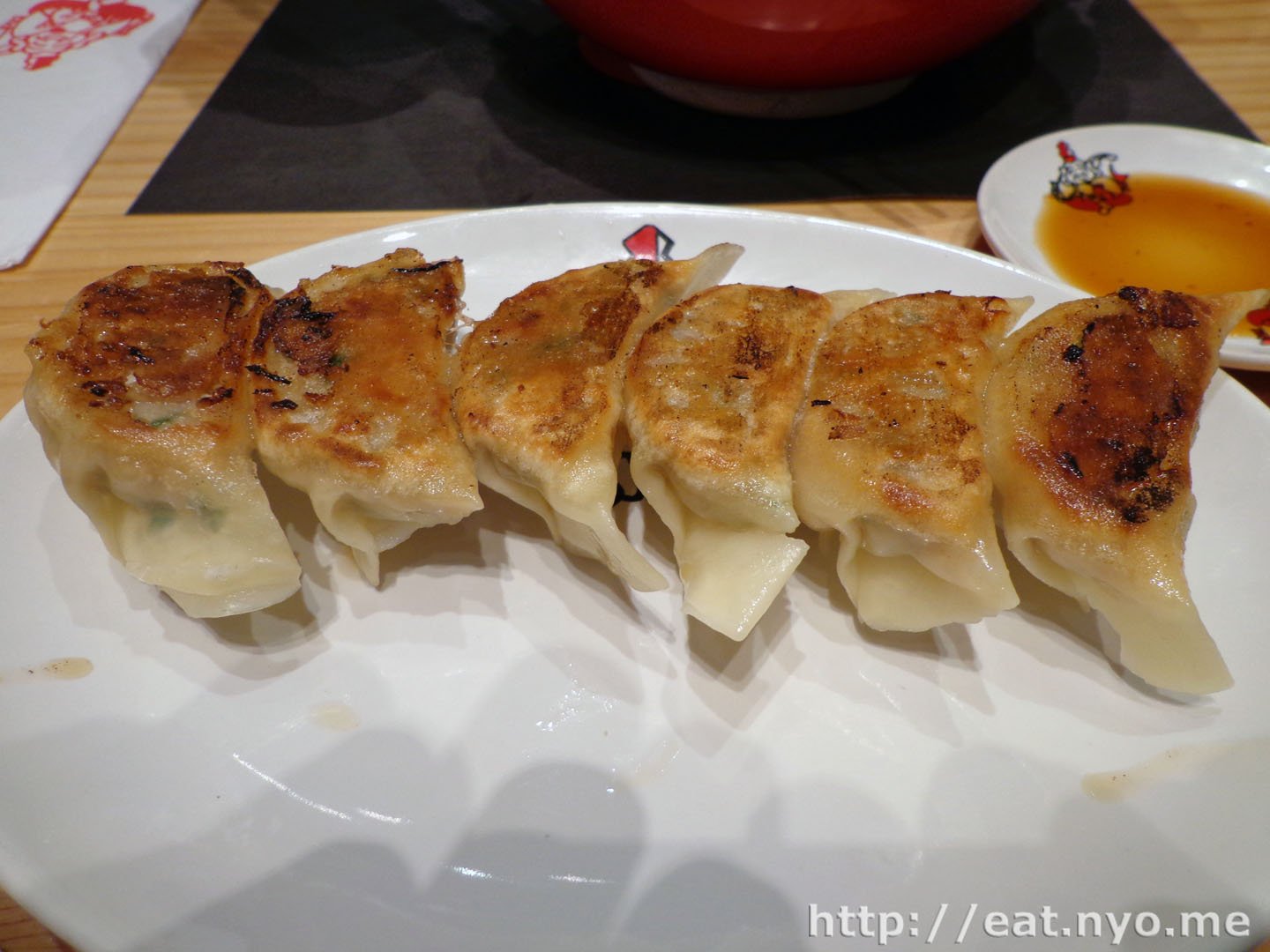 Our Gyoza was quite meaty. Fried on only one side, it provided a nice contrast in texture. And, again, quite meaty. Unfortunately, this particular patron would’ve wanted a more crunchy, veggie-filled dumpling. Still, it wasn’t bad. 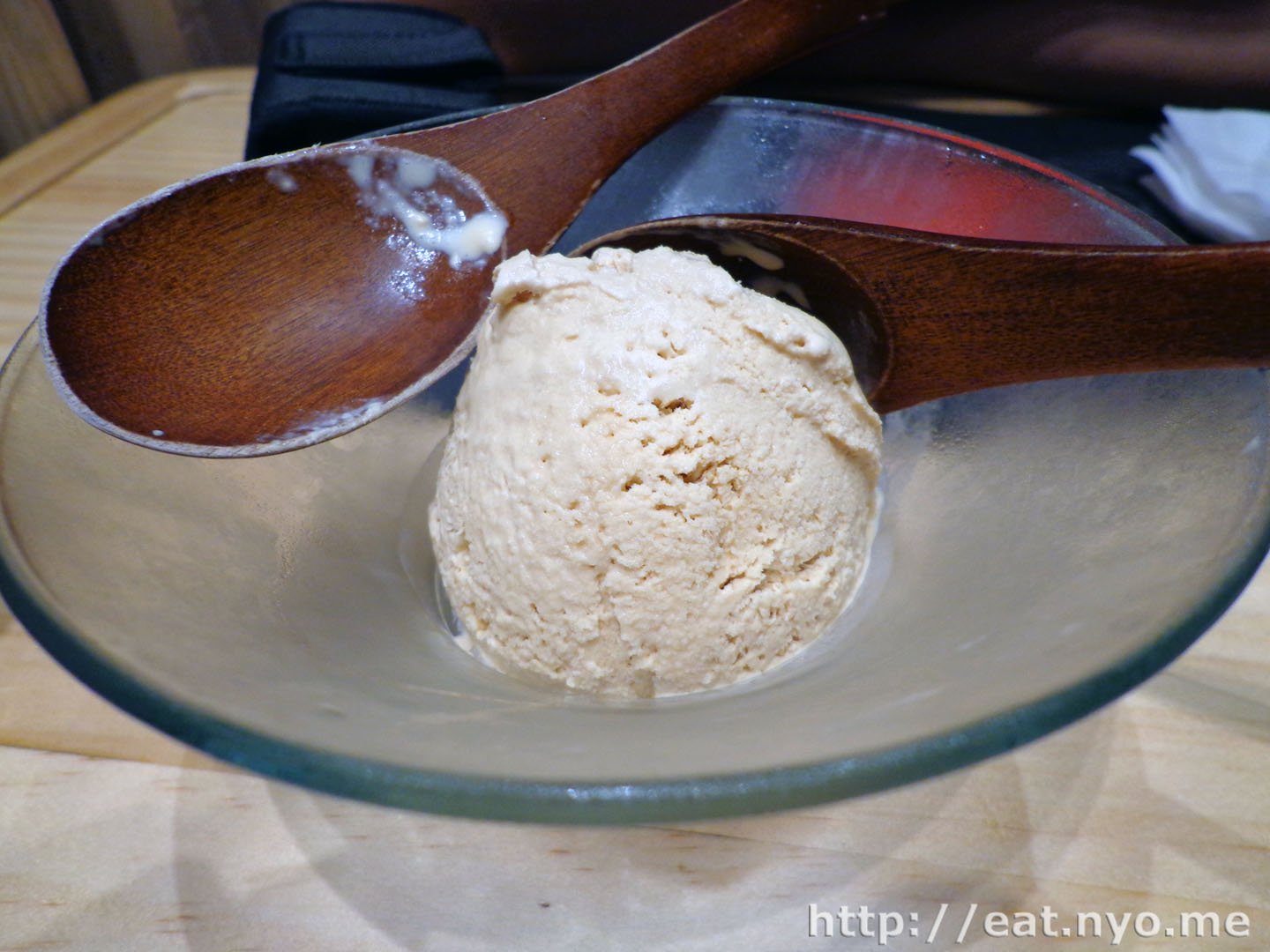 For 100 Php, their Sea Salt Caramel was certainly not as plenty as I would’ve wanted. Those are freakishly small spoons, mind you. You get a single scoop of aforementioned dessert. Although we managed to share it, it wasn’t enough to sate.

I didn’t really have an extraordinary experience the first time. Maybe it’s because I expected too much especially with the price tag and standing queue. Or perhaps it was because we chose “hard” instead of “very hard”. Anyway, I promised not to write about this until we do get to try the firmest possible noodle. Sadly, the opportunity didn’t present itself until almost a month later.

This time, we had to wait for a good fifteen minutes before getting accommodated. Their menu and prices were unchanged. This time, I ordered their Ajitama Tonkotsu (380 Php), which was their basic ramen plus a special hard-boiled egg that’s usually a built-in topping of other ramen places. Beloved ordered their Spicy Tobanjan Tonkotsu (380 Php). I had no idea what tobanjan was, but according to the menu, it was just a spicy version of their original. Strangely, they removed the “very hard” choice and made it either soft, normal, or hard. I insisted to have the firmest possible noodle in my soup. This time around, they had their Daigaku Imo (80 Php) in stock, so I ordered it without hesitation. 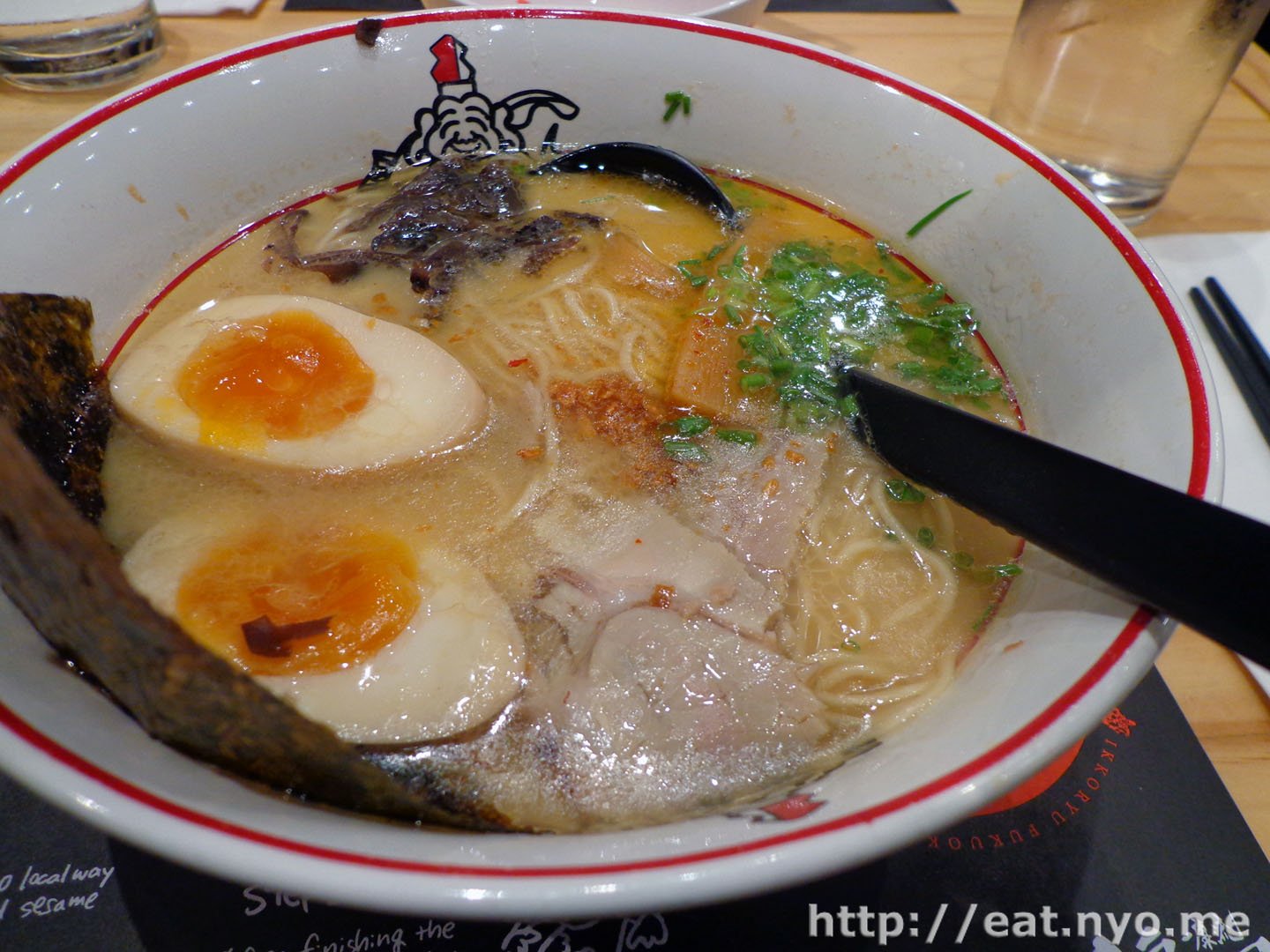 As promised, m Ajitama Tonkotsu was their regular plus ajitama, or marinated soft-boiled egg. Unlike the chasyu, this was actually quite memorable. The yolk turned into a pudding-like texture that was quite enjoyable with the soup. I also took time to examine the noodles. The first few bites were indeed quite firm and the way I wanted ramen noodles to be. I soon realize that their noodles were very thin, almost like angel hair pasta. It didn’t really turn softer in time—they were just too thin to give a firm resistance after it cooked even slightly more. The broth was still amazing, though, and it didn’t lose its novelty even though it’s my second time trying it. 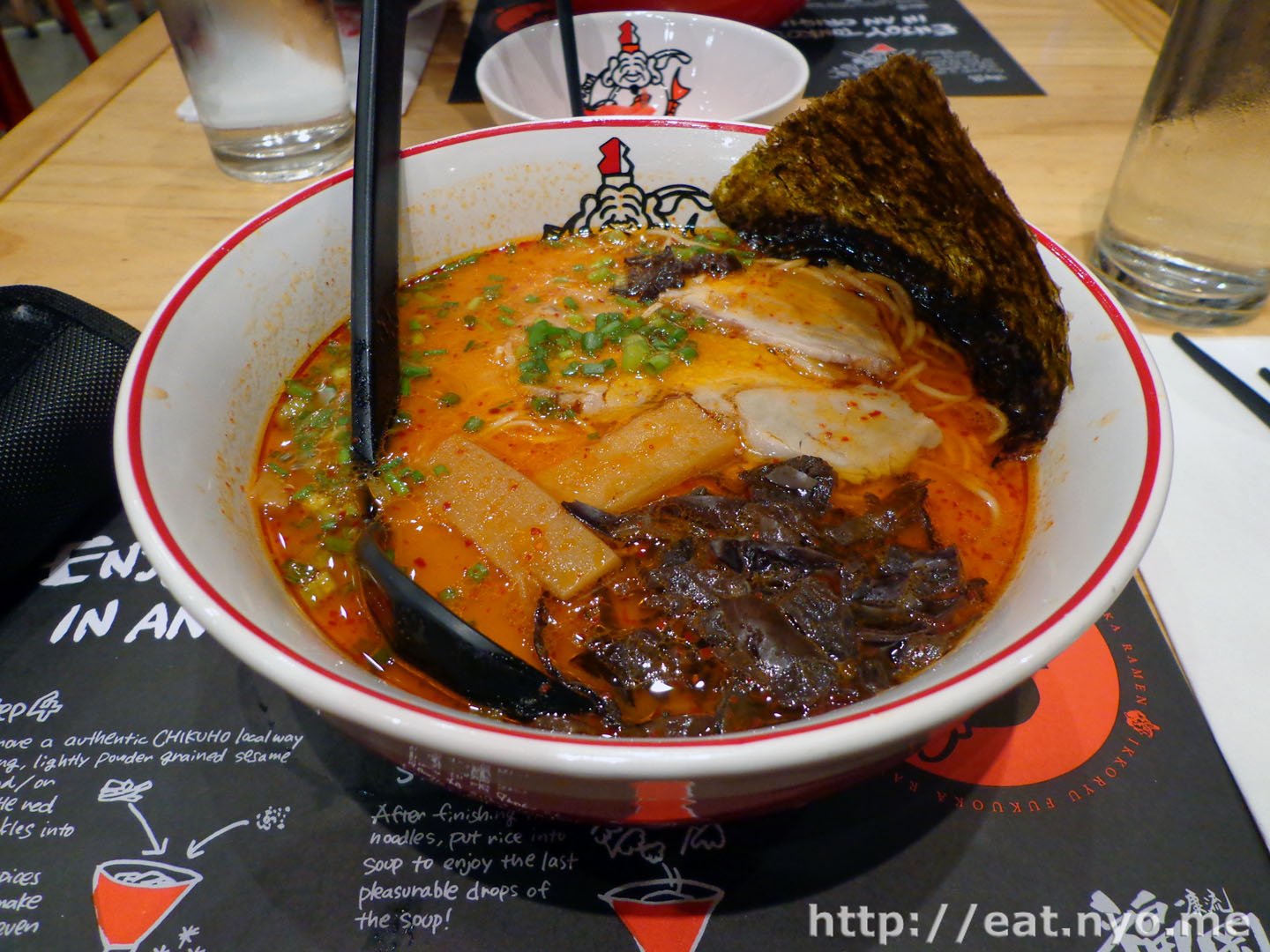 Beloved’s Spicy Tobanjan Tonkotsu had an ominous reddish color. It was quite spicy. But it wasn’t the bad kind of spice where you cannot savor any additional flavors, no. In fact, it made the already appetizing broth more appetizing. 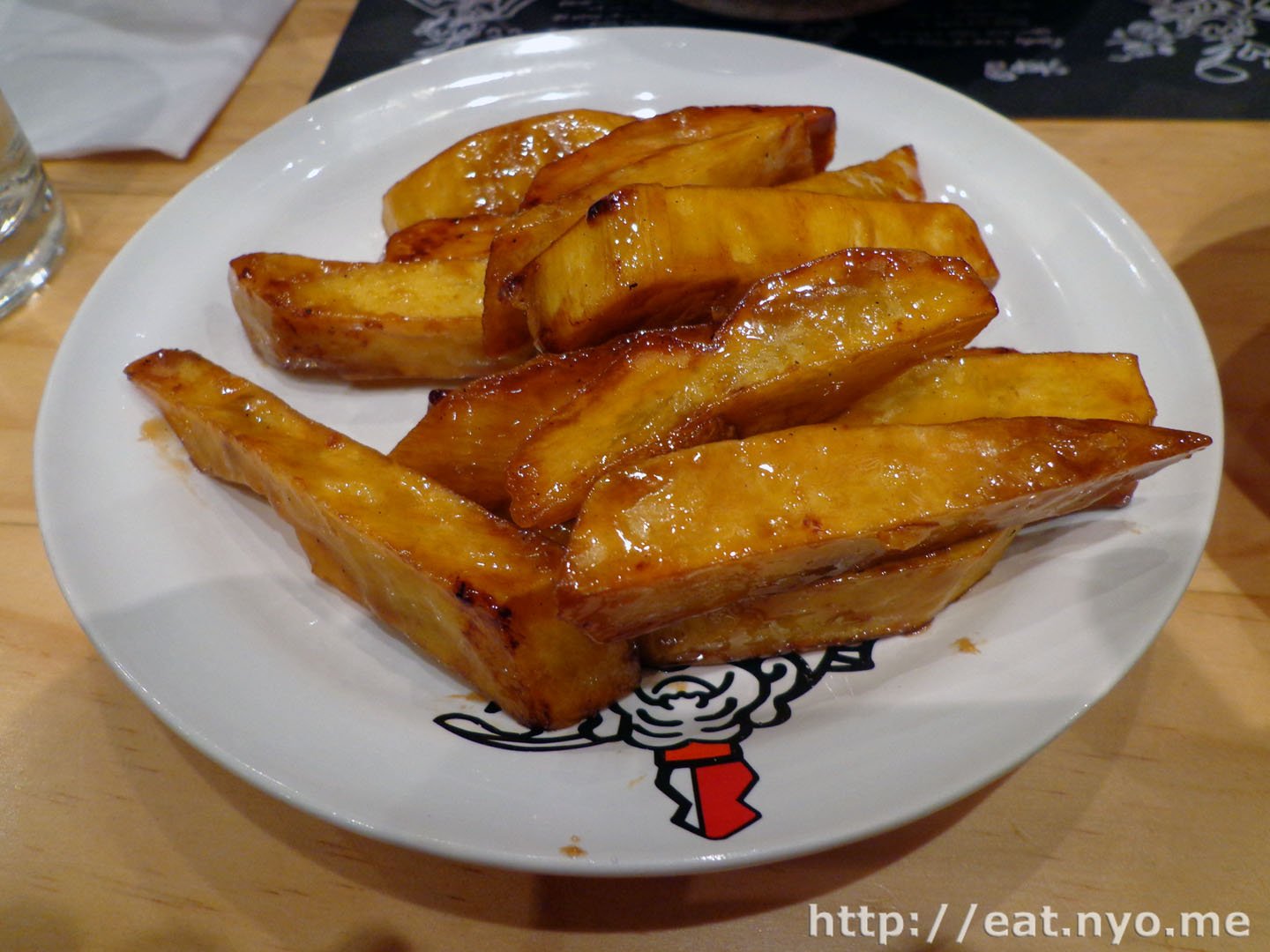 The Daigaku Imo was essentially an order of caramelized sweet potatoes. I’m not sure if they added any sugar coating, but it had a nice glaze to the thick cuts. What surprised me the most was that it wasn’t sweet—all the sweetness it had came from the main ingredient, making it quite enjoyable on the side.

Our two visits confirm that we’re probably not coming back here again for a while. Now, don’t take that previous statement negatively. It’s just that, we already tried out all that we wanted to in this place. That’s already a third of their ramen choices, minus the additional possible variations if you add extra toppings (which I’ll never do because it makes the price tag ridiculous). I’ll admit that the broth here is the best ramen broth I’ve had the opportunity to try. If someone asks me what’s the best-tasting broth, I’d answer Ikkoryu with no hesitation whatsoever. I’m just a bit disappointed with the price tag. Yeah, it was a big bowl, but from other places, it would be a more “complete” ramen with the softboiled egg, perhaps narutomaki, and more cuts of pork. I may be wrong, but I equate the greatness of ramen with toppings and noodles. While the broth here is divine, I find those two elements a bit lacking. They’re not bad, just not to my expectations. Of course, these were high expectations due to the simple formula of “prices + patrons = expectations”. For a not-so-critical patron, I guarantee that Ikkoryu Fukuoka Ramen is worth the visit.

Not recommended for: Islam practitioners.

Smart nomnomnom tip: According to their menu, once you finish your noodles, you can enjoy the rest of your broth with rice. I won’t personally try this but it doesn’t sound bad at all.