Beloved and I had dinner at somewhat new UP Town Center a few weeks ago. UP Town Center is a bit of a special place for me, since here once stood the place where I spent most of my childhood. Of course, this blog isn’t about the nostalgia but food. We learned that UP Town Center has a pretty good selection of restaurants that are somewhat foreign in the already food place saturated street in Katipunan Avenue. We actually wanted to go to this place somewhat earlier, during the time when it opened up. However, due to our busy schedule, we only had the opportunity to do so a couple of weeks ago.

Surprisingly, there were only a couple of places where we haven’t been tried out yet. Of course, there were only a few places open up, so it was understandable. Among them is Ginza Bairin. This place reminded me of Yabu, with their specialty being the black pig or kurobuta katsu. I actually know of a couple more katsu places that offer said premium ingredient that opened up or would soon be opening up. This makes me a bit worried that prized black pig katsu might become the next (milk) tea.

Anyway, aside from the menu, the relatively expensive prices are also reminiscent of Yabu’s. I guess it all boils down to quality. Beloved ordered their Seafood Set (525 Php) and I ordered their Kurobuta Rosu Set (595 Php). Beloved wanted katsu curry, so she ordered additional Curry Sauce (65 Php) because there wasn’t a seafood curry set. Saving grace of their expensive katsu sets was the unlimited miso soup, cabbage, and rice that Yabu also offers. It also has the same ceremony where you make your own sauce by grinding fresh black and white sesame seeds. 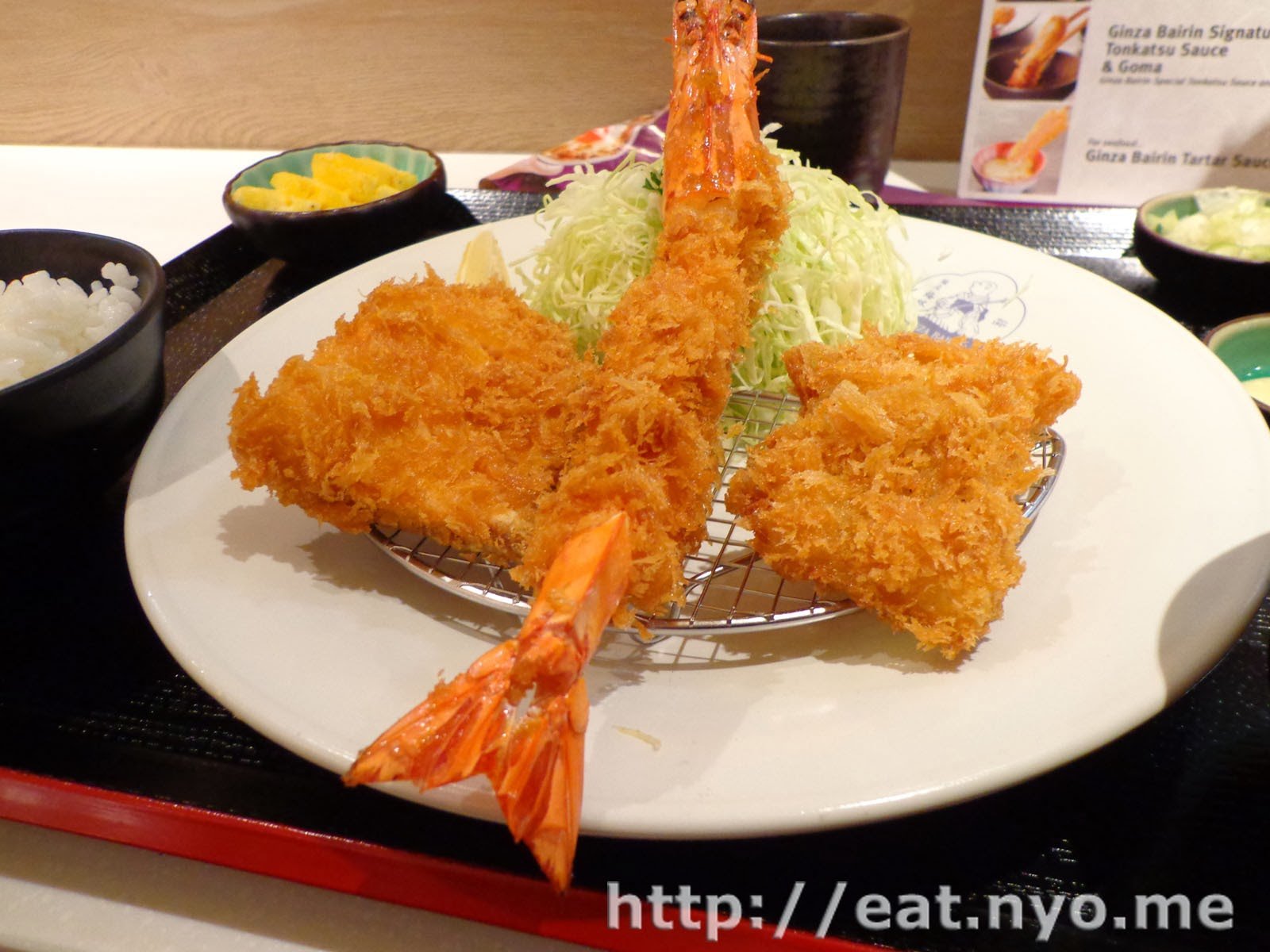 The last time we went to Yabu, I remembered a LOT of stuff in their seafood set. Ginza Bairin’s Seafood Set was… not as generous as my memory serves. This only has three kinds of seafood in it: salmon, prawn, and white fish. The katsu part was quite satisfying, with a nice crunch and a well-balanced taste to it without any greasiness. The meat was a different story. The prawn, although admittedly was a beautiful presentation, was not as spectacular as it looked. It was okay, though, unlike the salmon which turned out to be pretty dry, perhaps a bit overcooked for Beloved’s tastes. The white fish was the best of the plate, but that’s not saying much. Luckily, Beloved’s Curry Sauce, with the pretty good sticky Japanese rice and crisp cabbage saved the meal for her, not considering the price tag. 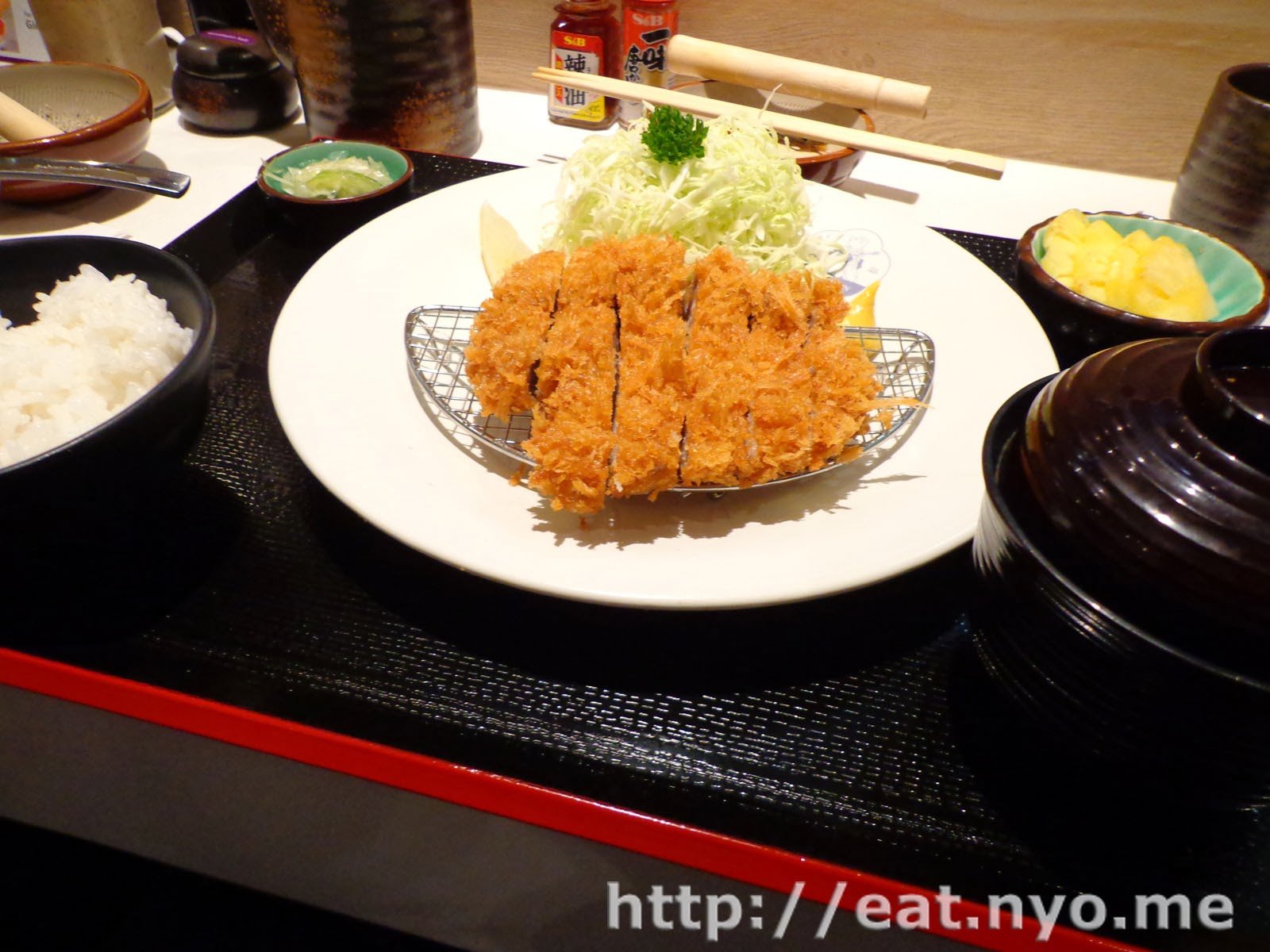 I remember my first experience with kurobuta to be quite a special one—juicy down to the last strings of meat. This Kurobuta Rosu Set provided me with a small cut of pork loin that did not give me the same sensation. I didn’t find it as tender as I expect. Perhaps it was cooked wrong? The crunchy katsu part was okay, it didn’t have the greasiness that your normal katsu place leaves more to be desired and it certainly wasn’t overcooked. The meat, however, being a premium one… I expected more, especially with what I paid for. Heck, I’ve had katsu that used local meat that provided a similar, if not better, texture and taste.

I tried to retrieve my losses through the miso soup, cabbage, and rice, which all were quite okay. It also took quite a bit of tinkering with the sauces and pink Himalayan salt provided to make the most of it. Sprinkling the salt on the pineapples and pickled radish that came with the sets we ordered did wonders. However, these shouldn’t be the star of this place. Beloved was clearly disappointed as I, especially after paying almost 1.4K for the two of us, and that’s minus drinks, after service charge. Now, don’t get me wrong, service is good—quick and friendly in fact. However, if their ingredients are as premium as their menu claims, it shouldn’t have left us with such a negative first impression. It’s either I’m comparing it too much to the competition or the cooks of this Ginza Bairin branch just need more time to get better with the delicate ingredients their menu offers.

Not recommended for: Frugal peeps.

Smart nomnomnom tip: A pinch of the Himalayan salt to the sauces and Pineapple dessert does wonders.