After going to Tsuta with Beloved and Const, we went to Wrong Ramen since we were obviously unfulfilled on both stomach fullness and savory ramen cravings. We chose to go here because, like Tsuta, this place was unique in that there’s no other branches in the Metro. Also, the last place just made us want real ramen, and we hoped this place would fulfill that need.

We’ve already heard of this place a lot for years but never had the chance to try it out. We know that the reason it’s called Wrong is because it is literally wrong. Their ramen varieties are quite unusual and named slightly politically incorrect, such as Hot Junk and Seamen. It’s also wrong with the topping choices—their Hot Junk, for example, had kimchi and they also have a soft-shell crab variant called Krusty’s Funeral.

Also adding to the “wrongness” of the place, the interiors were also interesting and slightly unusual. Yes, there’s the clever aspect that it had communal tables, but with removable dividers for a small sense of privacy, but the decor featured here featured artworks that ranged from strange to hilarious. In addition, they sell t-shirts that feature these strange-and/or-hilarious works of art.

Const went here before but only had their basic Tonkotsu Rich, which he describes “wrong”, so I had very piqued interest. I settled for their second most expensive item in their menu, the FU (480 Php). Const ordered the same, but also asked for their Spicy Gyoza (255 Php) on the side. Beloved ordered their Communist (445 Php), which, like the Hot Junk, is among their spicy choices. 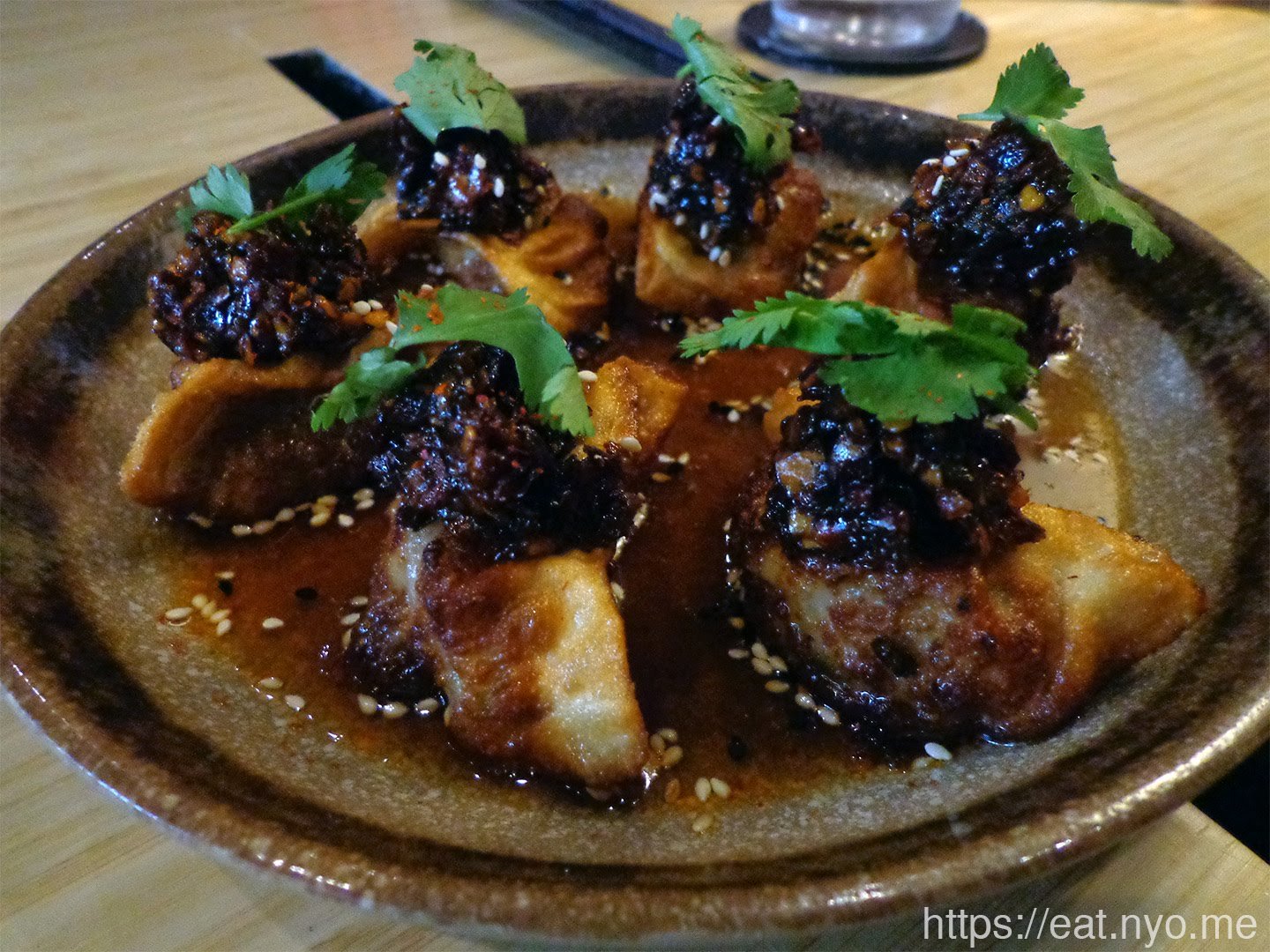 Their Spicy Gyoza were deep-fried, unlike the usual one-side-crisp, one-side-steamed serving. They are also individually topped with a lot of chili paste and cilantro. I, of course, removed the offensive leaf. It’s not as spicy as I expected, and I can actually tolerate it, but it was still quite hot. I was not a fan of the deep-fried part, though. Maybe it would’ve been more interesting to keep it traditional-style with the same toppings. 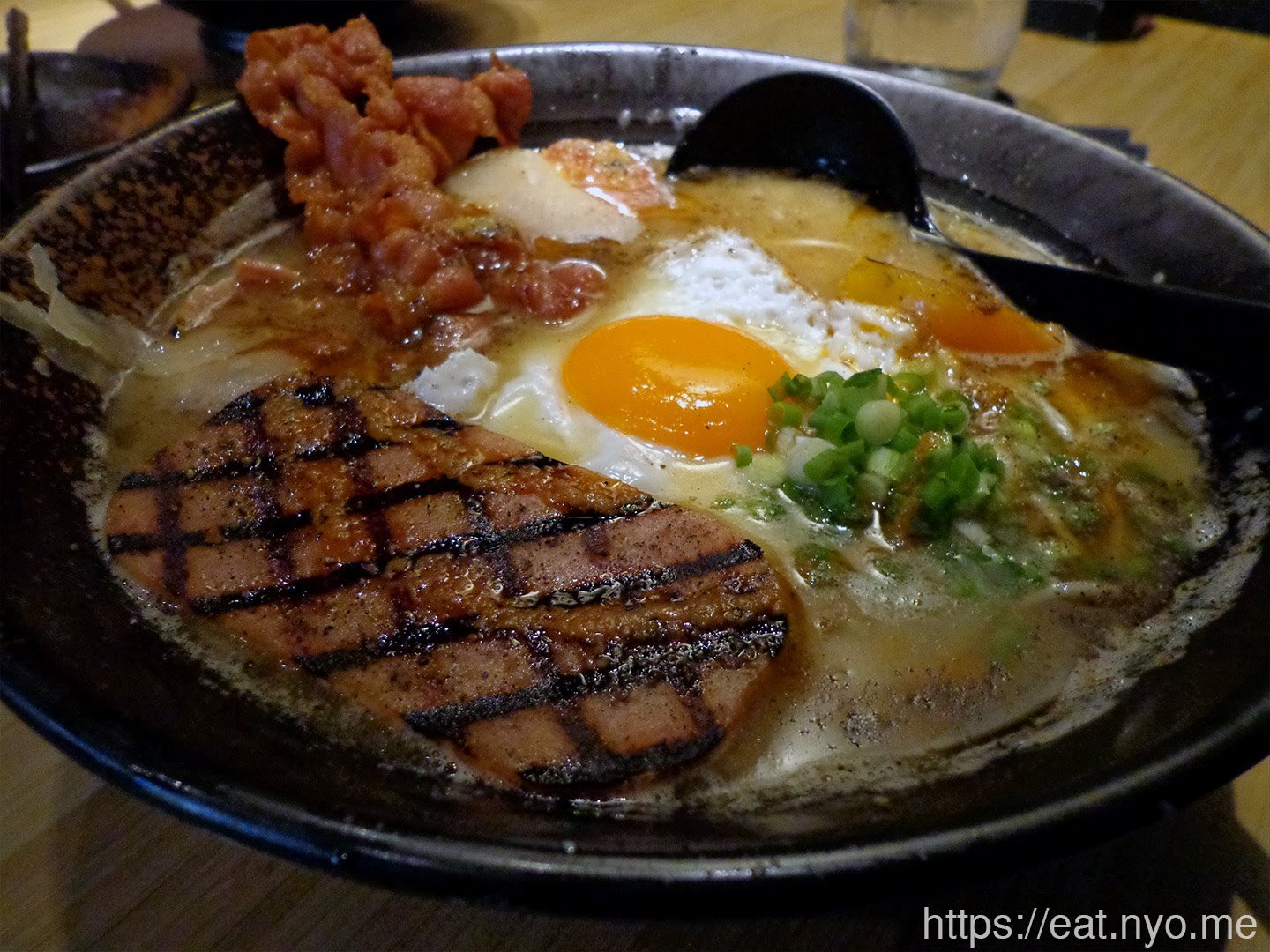 The reason I ordered their FU was because of the toppings. It featured crispy bacon, spam, fried egg, and parmesan. Aside from the already greasy toppings, I noticed that the broth was similarly oily. Noodles were thin, but not too thin, and also not as firm as I would like. The broth tasted as greasy as it looked. The entire bowl felt like you’re drinking the essence of bacon and spam. I felt like having a very rich and heavy protein-and-cholesterol breakfast in ramen form. Now, I’m a big bacon fan, but this is still among the oiliest ventures I’ve tried, perhaps next to our ventures on Livestock and C2 Classic Cuisine. The egg just added to the breakfast experience. 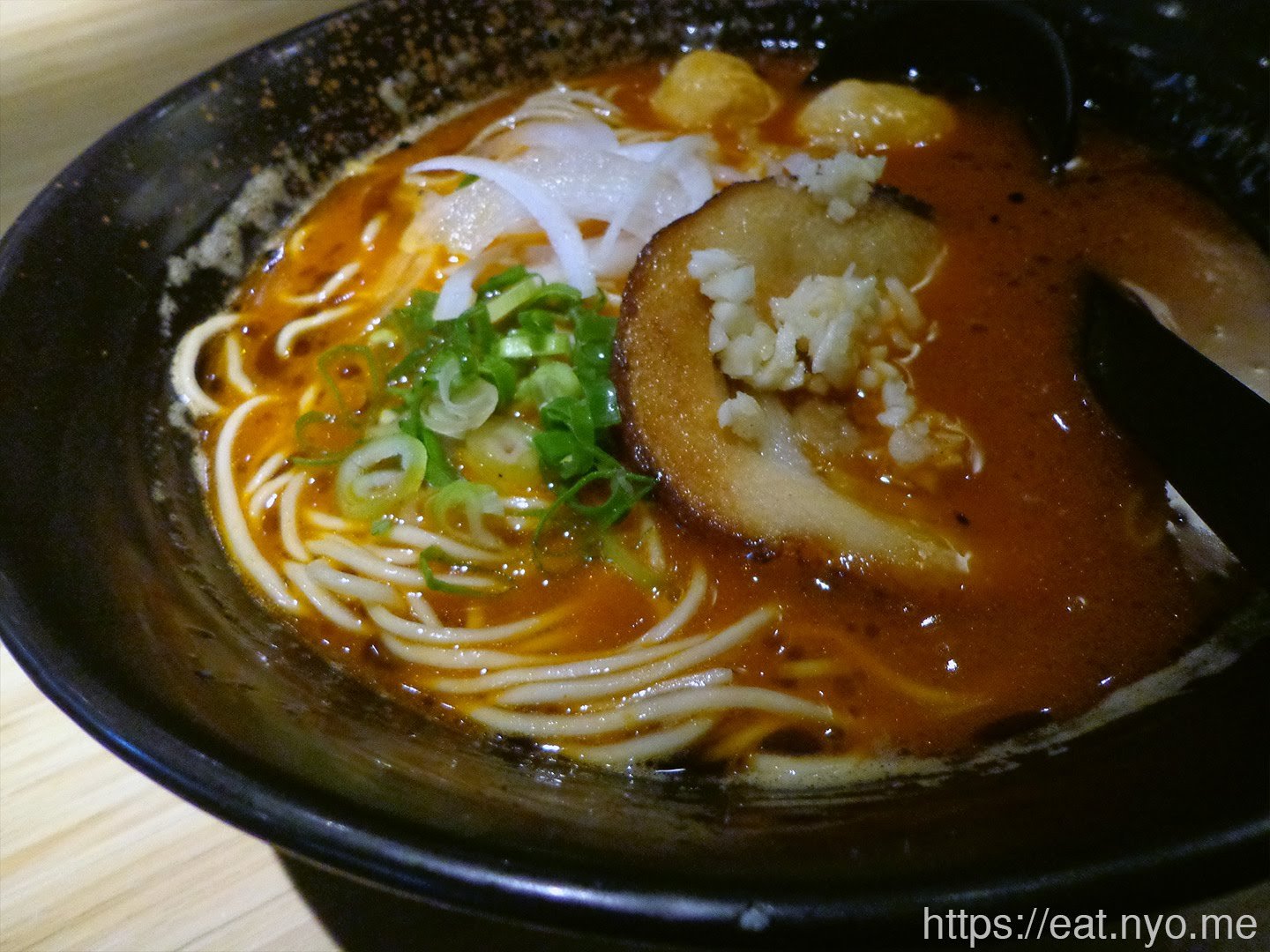 Beloved describes the Communist as among the spiciest soups she’s tried. It didn’t taste like your rich, savory Japanese soup. It was a spicy Szechuan style broth that you’d probably get when you ask for a spicy soup in a Chinese restaurant. It was more a Chinese bowl fit for its name. Toppings-wise, it had grilled chasyu and assorted balls you’ll find in Chinese-style hotpots. The pork she did not fancy as it was a bit on the tough side and she traded it with my spam. She enjoyed the balls with the blood red soup, though.

The good news, we got pretty full. The bad news, we got pretty cloy. As light as Tsuta’s broths were, in an almost extreme contrast, Wrong Ramen’s broths were indeed the richest, heaviest, and greasiest we’ve tried. It was an excellent adventure experience-wise as I haven’t had any unique food-trip like this in a while, especially for a ramen place. However, I can only recommend this for fellow food adventurers. Do not go here for an “authentic ramen experience”. Go here for a “Wrong Ramen experience”.

Not recommended for: Common, unadventurous folk.

Smart nomnomnom tip: Do not eat here after consuming up to half your daily allowance of cholesterol.