The soon-to-be-reviewed Korean place Beloved and I went to that I talked about in my Sebastian’s review was Samgyupsalamat. This is one of the many Korean Barbecue places that has opened up essentially everywhere in the Metro. Its name is a play-on-words with “samgyupsal”, the Korean pork barbecue that’s wrapped in lettuce, often with rice and other toppings, and “salamat”, Filipino word for “thanks”.

Samgyupsalamat has actually existed for a very long time already; one of its original branches is located in Matalino street near Kalayaan avenue in Quezon City. One of the reasons me, Beloved, and our friends didn’t try this before was because the name turned us off. Also, we somehow preferred used-to-be-tried-and-tested places like Don-Day. The franchise grew considerably and now has branches everywhere. Perhaps this is the most widespread Korean barbecue place in the Metro that offers unlimited samgyupsal and other cheap grilled meats plus banchan, like most other unlimited Korean barbecue places do at a similar price point. In fact, the branch we went to, located at Regis Center in Katipunan, is actually one of the new branches that opened up. It’s actually the second branch in Katipunan, the first one being in a much more hidden area further down Katipunan from the University of the Philippines.

While we’ve been to this place a lot of times already (in their other branches, at least), this was the first time we went to a newly-opened one. Their all-you-can-barbecue plus banchan, soup, rice, and egg is priced at 449 Php at primetime after 3pm, which coincides with the time we went. What’s a bit special about Samgyupsalamat is that they offer nine meat variations, five pork labeled “P1” to “P5” and four beef labeled “B1” to “B4”, and you get to choose two kinds of meat at a time. As we were seated, we got their “B1” and “P1”. 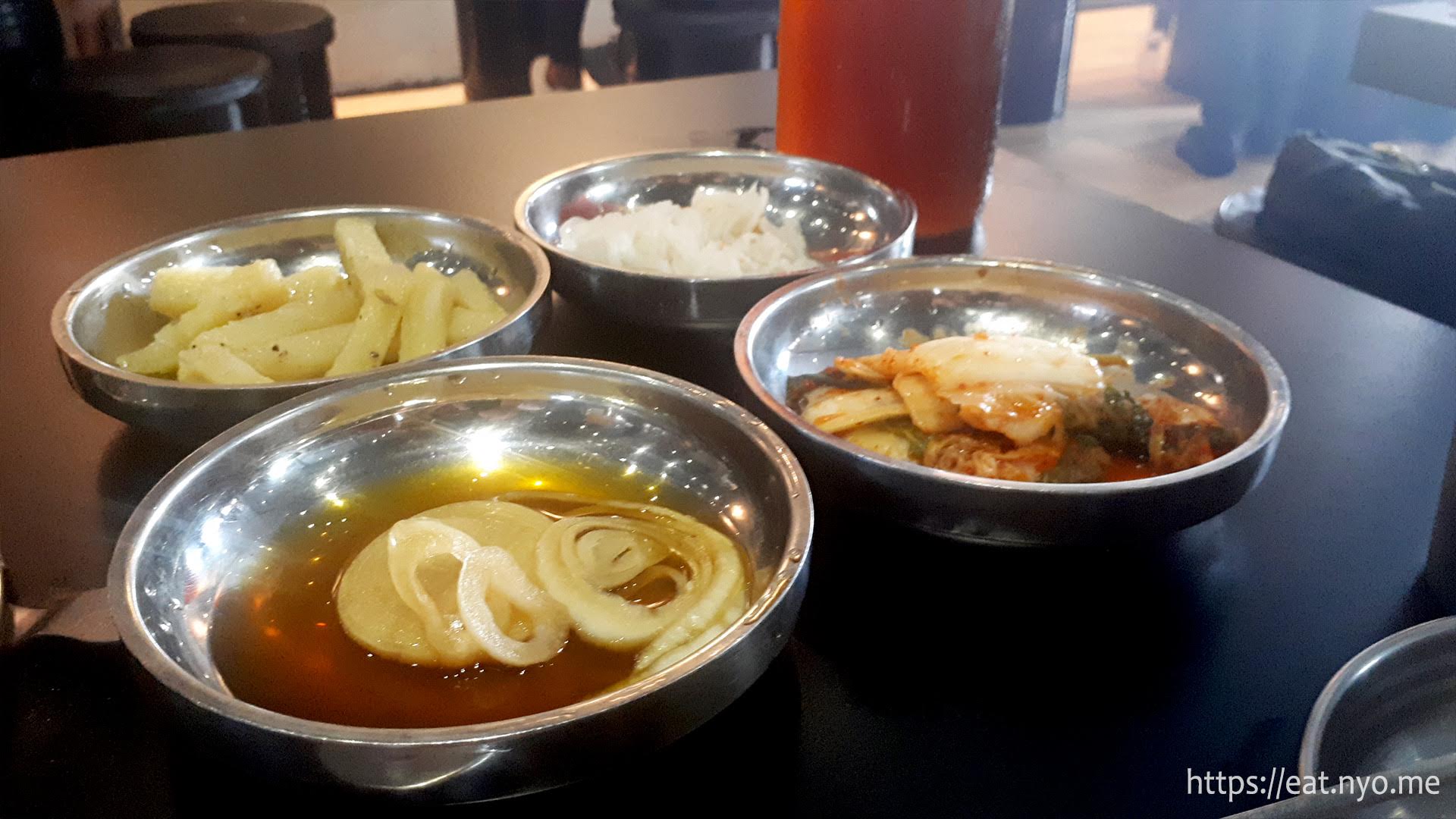 As we gave our initial two orders, the banchan was placed on our table. It seems to be a staple among all our visits that they consist of a starchy potato dish, mildly pickled radishes, sweet marinated onions, spicy chopped green onions, and, of course, spicy kimchi. 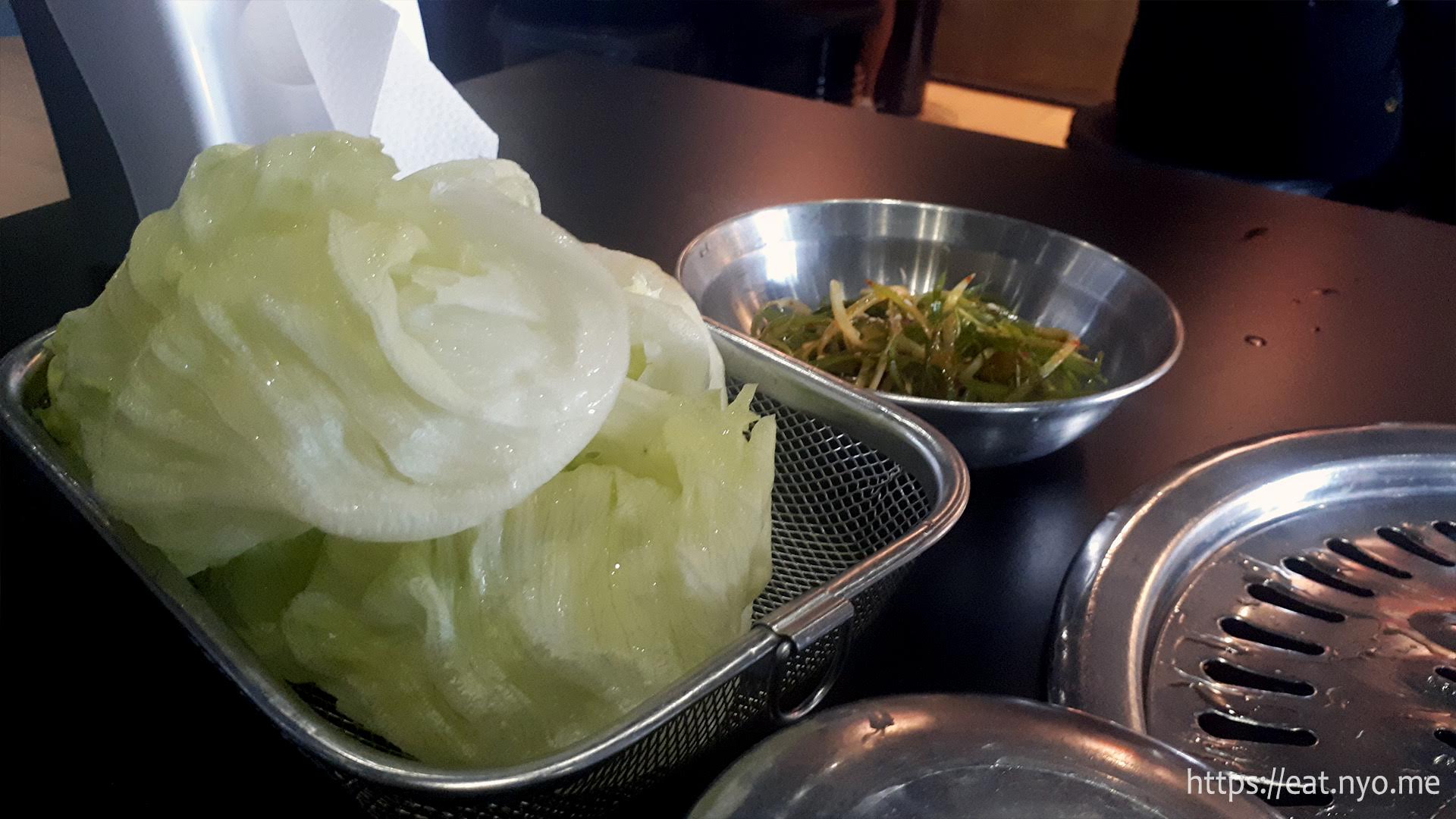 Then there’s lettuce leaves meant for you to wrap your samgyupsal with. Not much to say here, perhaps not as fancy as other places. 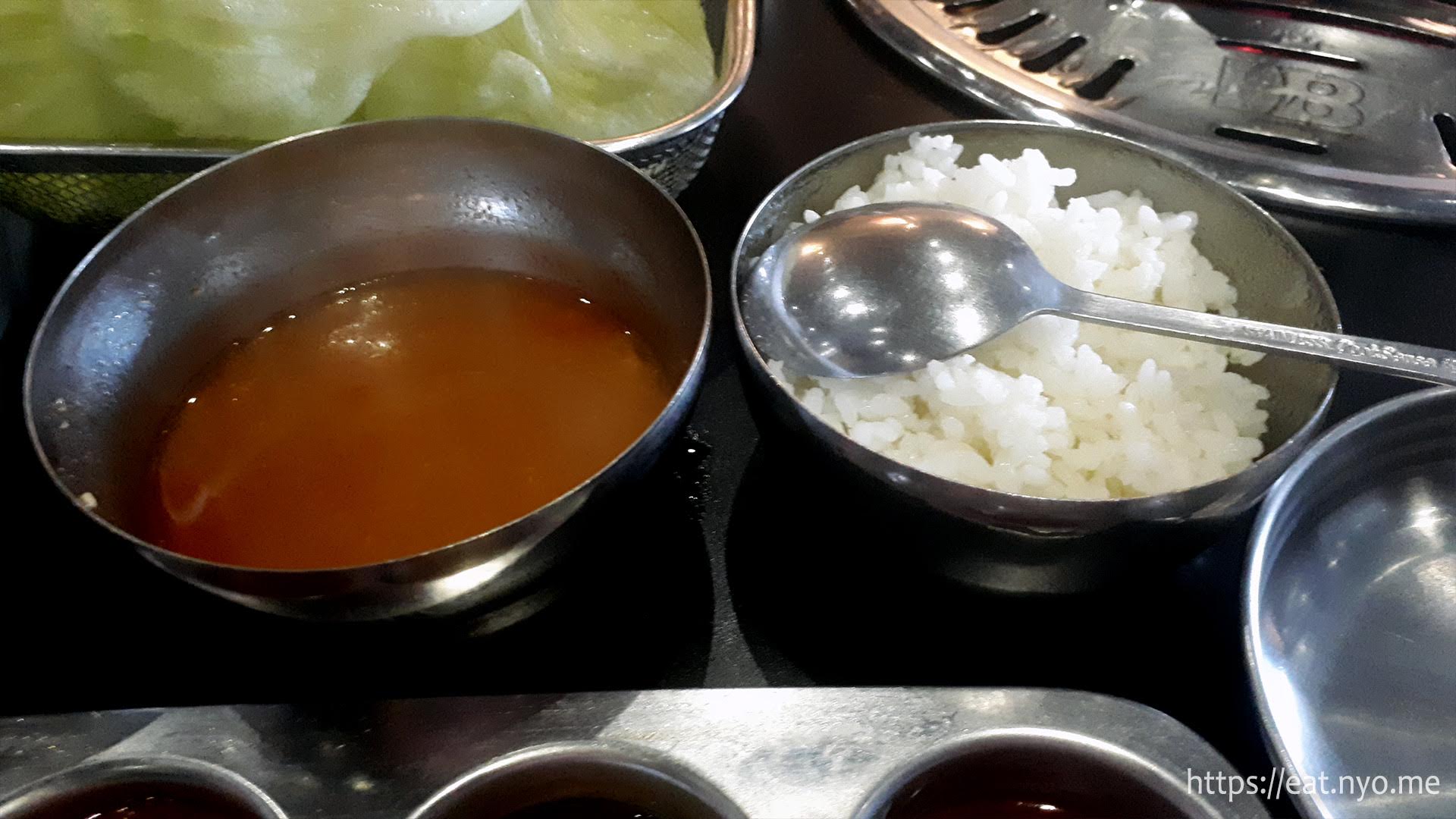 I don’t order rice, which is optional, but Beloved does. The soup was quite spicy. According to Beloved, this is kimchi jiggae. 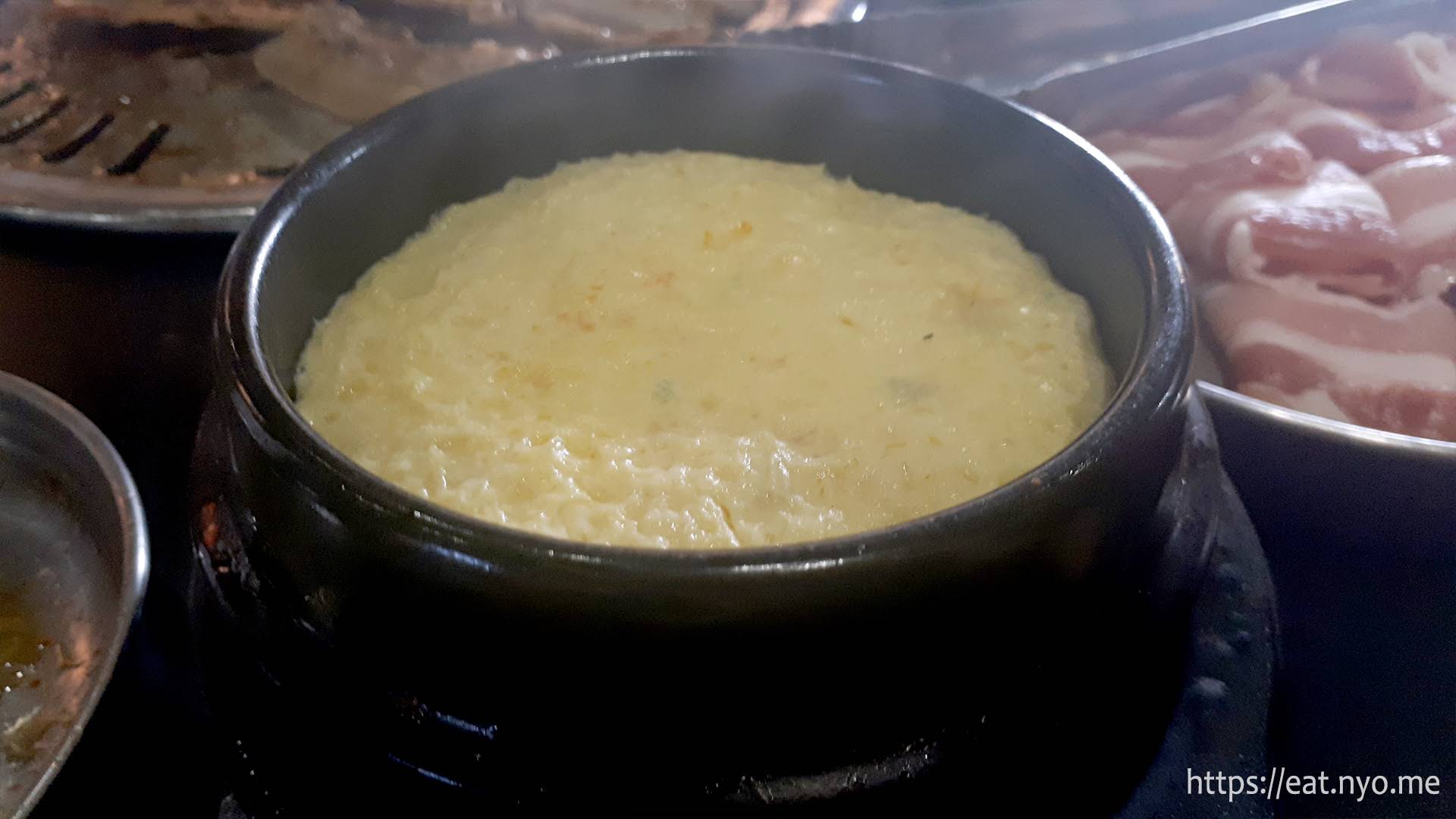 And, finally, for the sides, at least, is Beloved’s favorite in this place, the scrambled egg cooked in a pot. The result is a soft, custardy egg dish that Beloved enjoys the middle part of and I’ll admit I also like. The edges get burnt to black, which she happily gives to me; I don’t really mind, it has a nice crisp to it which I like.

The “P1”, Dae-Pae, is essentially basic, unadulterated thin pork belly cuts without any marinade whatsoever. “B1”, Beef Samgyup, is basically the same, replacing the word “pork” with “beef”. These cuts were not as paper thin as Saram’s, but it’s still on the thin side. One of the upside, if you’re a group, at least, is that one “order” of these meats is good for a table of four, so it essentially counts as two orders for me and Beloved. 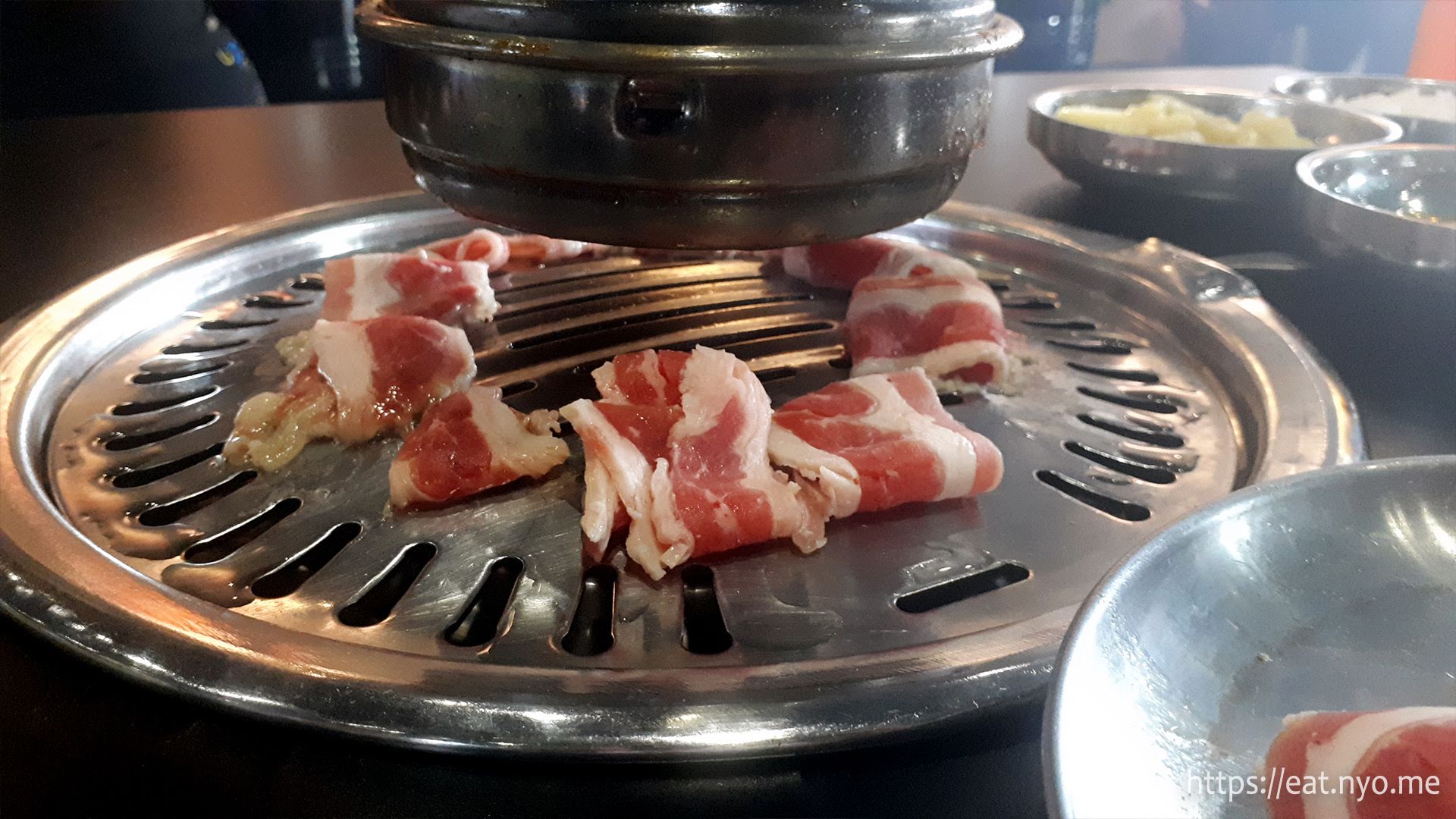 Because the meats were sliced thinly, they cook quite quickly. We place them on the hot plate unrolled, which rolls by itself, telling us it’s already cooked. Another advantage is we get to taste the meats a bit more on the rare side even if they’re thin. 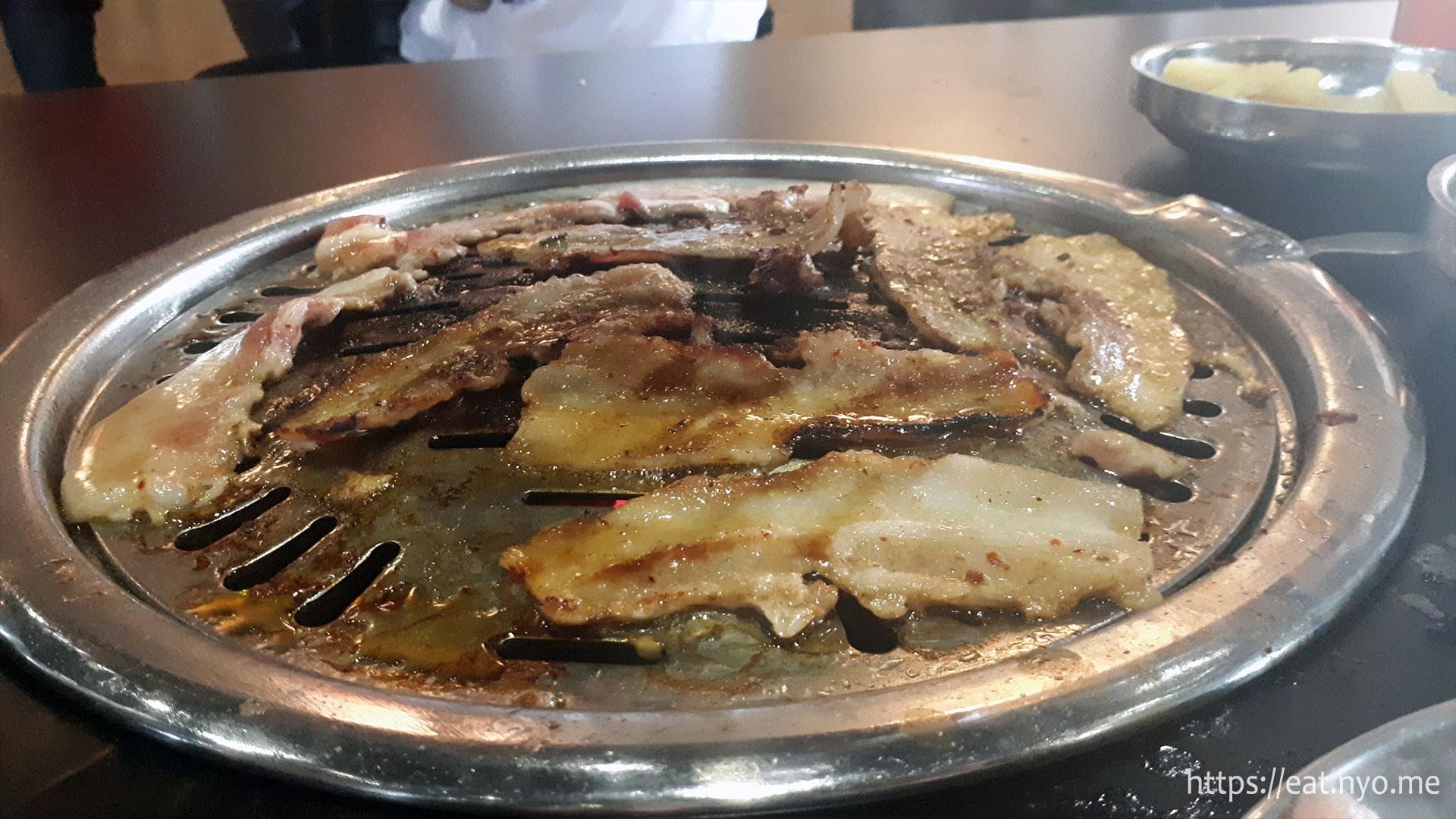 Even at the lowest setting, it only takes a few seconds per side to be edible. Of course, some might prefer them to be cooked more. If you cook it just right, you’ll get some nice, juicy meat slices that goes very well with the lettuce wraps and whatever stuff and sauce you decide put in. I prefer adding in kimchi, onions, and radishes, then dipping it with the sesame oil and salt-pepper mixture. 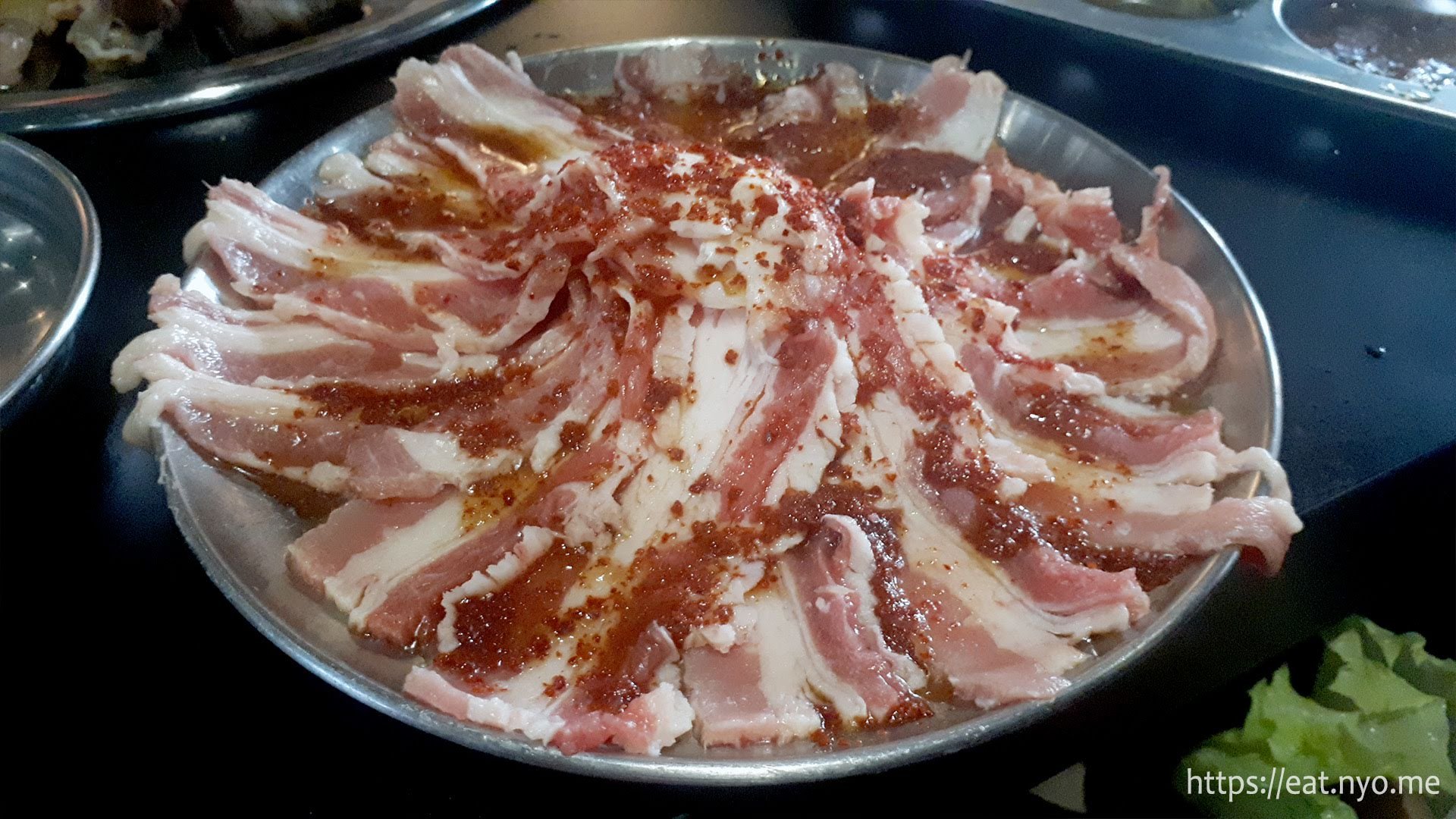 After consuming our first round of meat, we ordered their “P3” and “B2”. The “P3”, yangnyum baepae while not pictured is basically a marinated version of “P1”. The “B2”, yangnyum beef pictured above, is a marinated version of “B1”. Why they are not numbered similarly is beyond me and slightly infuriating. Why I didn’t put a picture of the “P3” is because it’s essentially the same. The marinade made it a bit sweeter and tangier, but, honestly, not by much. It’s okay, and once you wrap it on your lettuce or put it on your rice, it’s fine, as long as you cook it right.

Two rounds basically mean we’ve eaten four servings of meat apiece, not counting the banchan and lettuce refills. That seemed good enough value for us. We’ve tried most of their meats before in previous visits, which is why we didn’t get the other meats. Those are either too thick, too marinated, or too fatty for our liking. The thinly cut meats we chose are perfect for the two of us, and doesn’t get us too bloated. While some will argue that this is not a genuine Korean barbecue experience, where pork cuts are often thicker and using scissors is required, those choices are possible in Samgyupsalamat. However, if you do decide to partake in their thicker cut meats, I’d recommend having a party of four or more. As for how it compares against competition… honestly, not much. The queue here is more tolerable than newly-opened but most likely also similar Romantic Baboy, which we might never get to try. If your party is more about meats and don’t really care much about sides, Samgyupsalamat is a good budget option.

Not recommended for: Loner vegetarians.

Smart nomnomnom tip: Start with the ‘basics’ as to not blacken the hot plate.