After our wonderful dinner at Cyma, Beloved wanted to have dessert, so we passed by the newly opened Gelatissimo at Trinoma, just a small walk away from Cyma. Because I said this was a dessert and its name pretty much says it, perhaps I don’t need to say what this store specializes in. But I will. Gelatissimo is a gelato cafe. And it’s not just the usual small-stall gelato shop or ones found within an Italian resto. This really is a cafe. This is the Starbucks of gelato. Of course, being the Starbucks of gelato, I expected this to be pretty expensive as well. However, since we did spend a bit on Cyma, I guessed spending a bit more on Gelatissimo wouldn’t hurt, so I let Beloved have her way.

My suspicions were correct. This was indeed an expensive cafe. Their smallest serving of gelato—a small single cup—costs 110 Php. Luckily they offer a 15% discount to students, which we were, bringing the tab down to 93.50 Php. That’s still plenty lot, though. They do offer a lot, and I mean a lot, of different varieties. Their selections were basically twice from your usual gelato places. If I counted right, there were at least seven different chocolate-related flavors, and that’s barely a third of their menu.

Anyway, Beloved had their Green Tea Gelato. The server asked if she had tasted it, and she said no. They then gave her a plastic spoon to try it out. After tasting it, she confirms that it was the flavor she wants. Shame, I thought, because you can practically try out all the flavors before choosing the one you want. And there’s my smart nomnom tip for this entry. 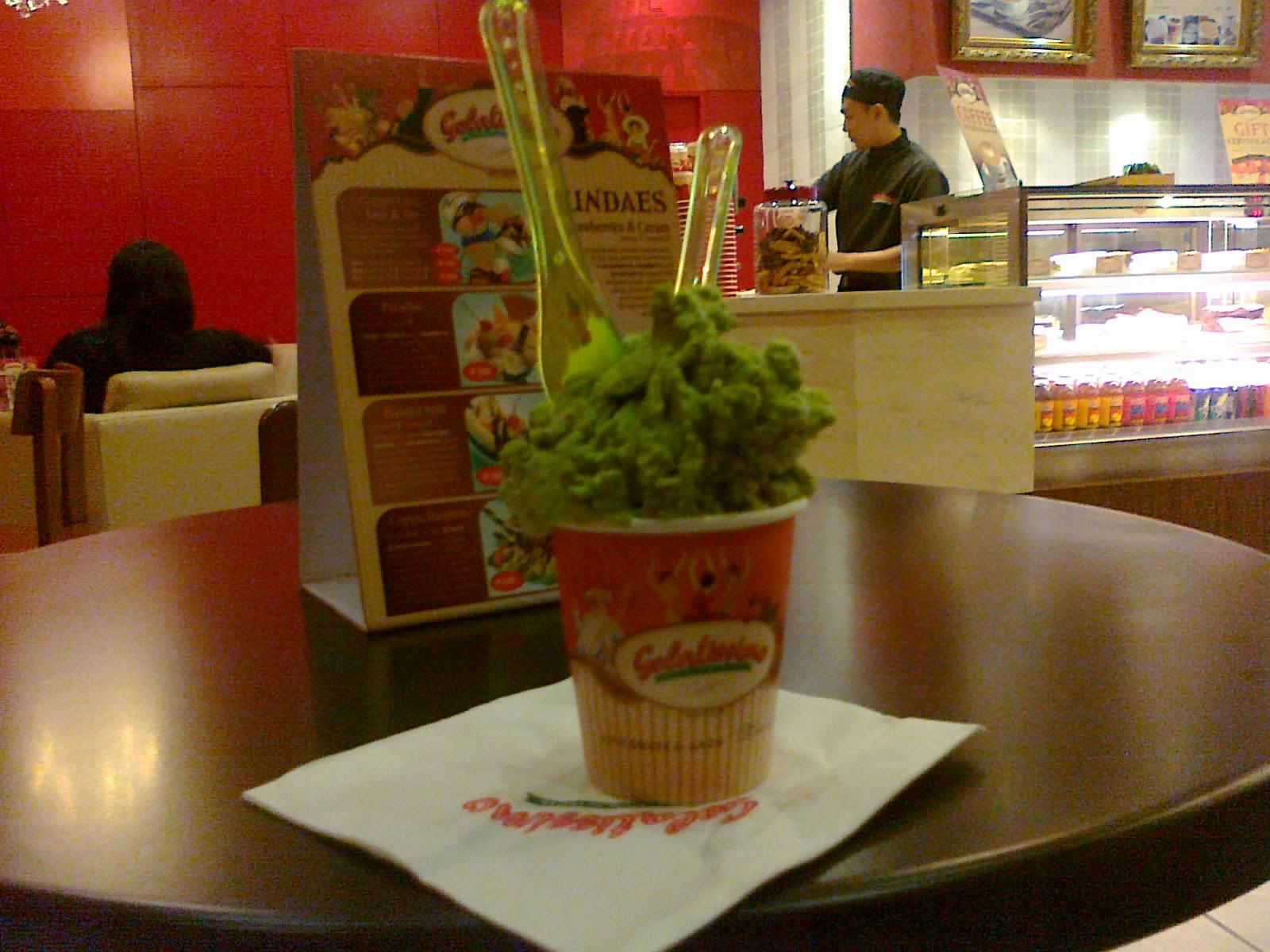 Although the Green Tea Gelato was in a heaping serving, it was still a small cup—much smaller than the usual 50-80 Php cups of their competition. However, it might just be the most genuine tasting green tea gelato I’ve had. It was practically devoid of any sweetness whatsoever, and tasted 100% bitter like hot green tea. Only, it’s creamy and cold. Sadly, I didn’t really like it. I want bitter to be accompanied with heat, making it refreshing. The combination of cold and bitter just makes me sad.

I know I’m probably being hard on this, but I expected much more. It’s, hands down, the most expensive gelato place we’ve tried, ever. We weren’t able to reap the two advantages this place has over the others, which is the fact that they allow free tasting of their many flavors and these many flavors themselves. The latter might not even be an advantage, as it just leaves us hard to decide. More importantly, the competition just makes me not like this place. Paying 90+ Php for a meager serving of an overhyped and overpriced dessert is just too much. If gelato is your vice and have lots to spare, then I advise that you try out all their flavors before narrowing it down to the one you like, just so you can make the most of it.

Not recommended for: Expensive dessert haters.

Smart nomnomnom tip: Try as many flavors as you want before ordering the one you want.