After our adventure at Akira, Beloved and I had dessert at Golden Spoon. This frozen yogurt place is located at the ground floor of Shangri-La Plaza. We were very reluctant going here, but after learning that they have an “all-you-can-put” mechanic, we decided to try it out.

There were three weightless “artist cup” sizes to choose from. The first one, costing 199 php, was smaller than what most yogurt places consider “small”, and was so puny that it looked like we couldn’t fit even half a cup’s worth of yogurt—and that’s without toppings, which Beloved would consider a crime not having with yogurt. The next one costs 299 Php was a more realistic sized cup wherein I thought we could fit in enough good for Beloved and me to share. So we got that cup—their Wonderful Cup for beloved and me to share.

I was the one who handled all the putting, so I packed as much yogurt as I could. There were plenty of flavors to choose from, and I put in Tarty Tart, Classic Vanilla, Double Vanilla, and Coffee Kahlua flavors. Before I knew it, it was already twice the height of the cup and we didn’t even have any toppings yet, which Beloved nagged at me for. There were also a lot of toppings to choose from, but we only managed to put in granola, because putting any more felt like it wouldn’t hold. Looking back, it could have, but we didn’t dare risk it. 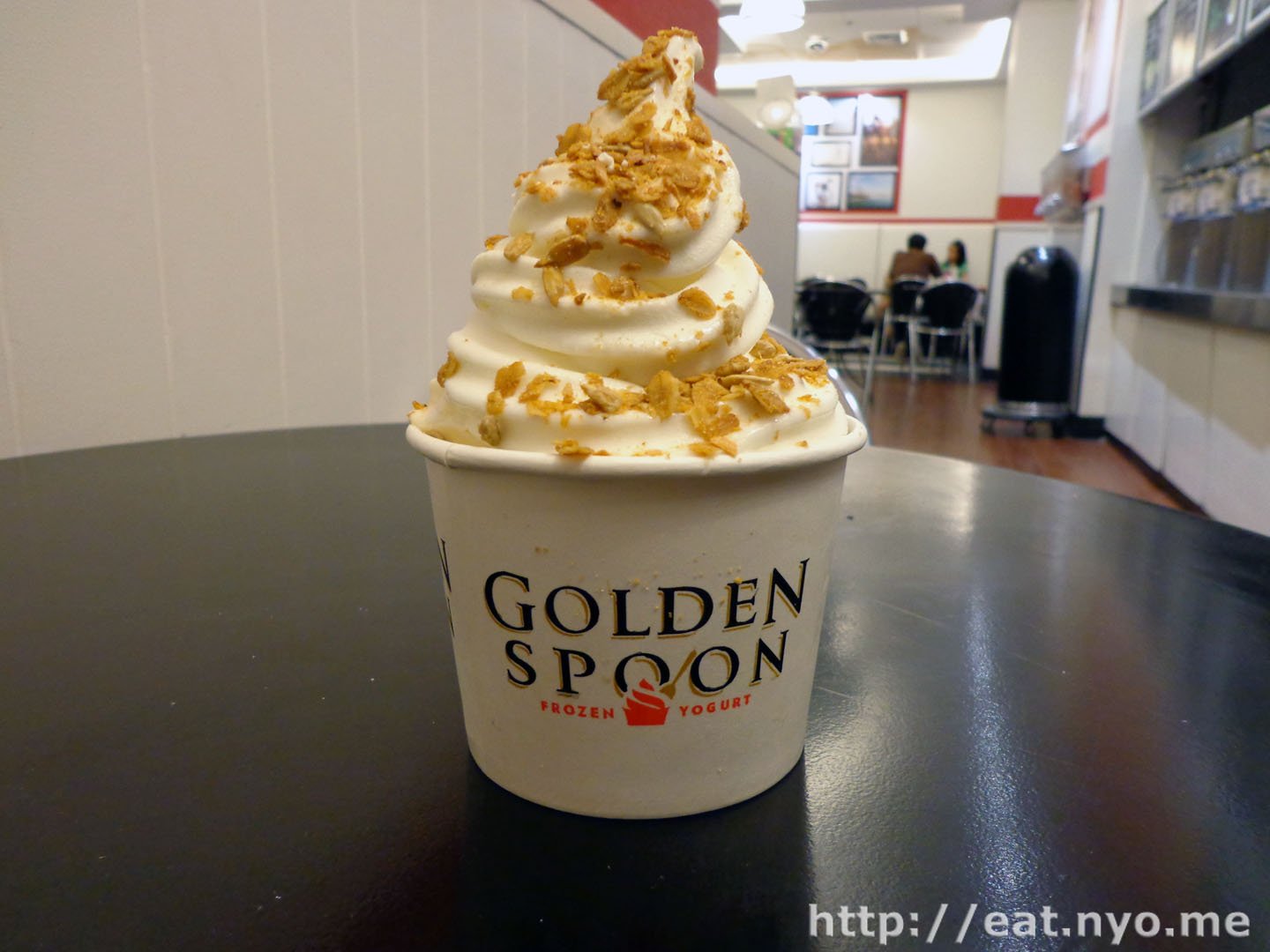 Above is our (well, mostly my) creation. Beloved was quite dissatisfied with the lack of toppings. However, I guarantee that the cup is packed full of yogurt. The flavors vary, but they were all thick and creamy. I noticed, though, that most of them were sweet, unlike the sour yogurts we were used to. The only sour one was the Tarty Tart flavor.

Before proceeding, I must warn you that the next part of the entry includes high amounts of gluttony. Please do not attempt this. You have been warned.

The week after, when we revisited Ikkoryu Fukuoka, Beloved and I revisited Golden Spoon. She insisted on going because of the disappointment of the lack of toppings I put in our (well, my) creation. She had forgotten that each cup costs 299 Php, and thought it was 100 Php less. Still pressing on, we both had a Wonderful Cup each. 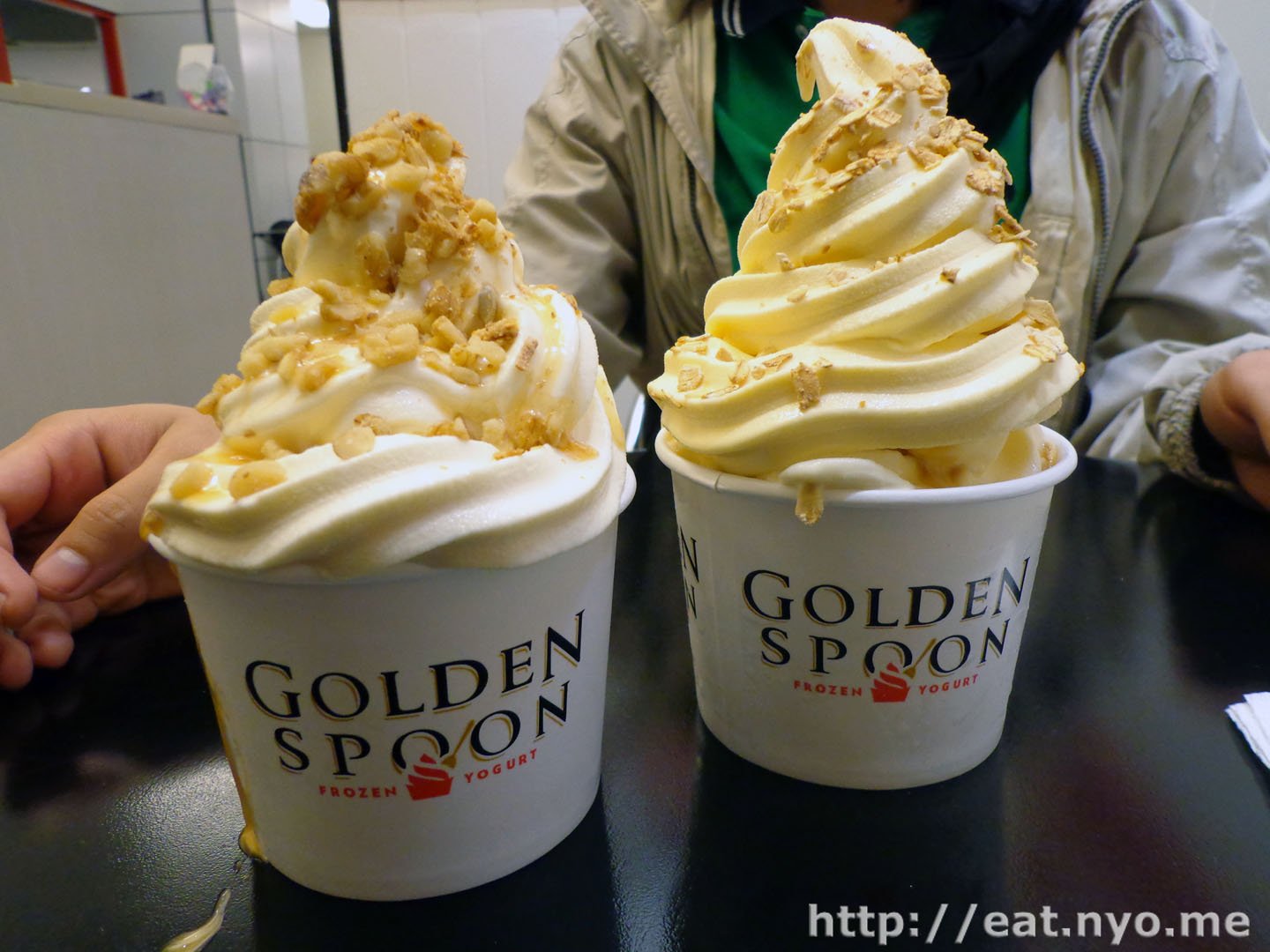 Beloved’s creation is on the left. It was as tall as our last creation, but this time, she added more toppings, namely sliced almonds, crushed walnuts, crushed granola, and caramel syrup. It doesn’t look like it has that much toppings does it? Well, Beloved made a hollow cave inside filled with said toppings, so she has less yogurt. I just added some yogurt chips and caramel syrup on the outside and some kiwi slices on the inside for mine, but it was way taller than the one I managed to make the last time. It was also similarly packed full, unlike Beloved’s hollow creation. As for the flavor choices, I had both Classic Vanilla and Double Vanilla, and an interesting sounding Cake Batter flavor. Beloved had Cafe de Leche, Cake Batter, Coffee Kahlua, Double Vanilla, and* Tarty Tart* flavors in smaller quantities.

I must applaud the caramel syrup topping, which they claimed to be sugar-free. It tasted pretty much like caramel, which, as far as my gastronomic knowledge tells me, is basically melted sugar. How they made it taste 100% like caramel minus the sugar is beyond me. Also, placing the kiwi fruit under the yogurt was one of the greatest ideas I’ve executed, as it made the sliced fruit into a gastronomic frozen treat with a wonderful texture.

After bringing our cups to the table, it downed to me how gluttonous this venture was. We just spent two Don-Day’s worth of yogurt, and it actually felt like it was worth as much in weight. What’s worse is we managed to finish it all up. This felt like a kilo-calorie’s worth of yogurt. Luckily, I have a pretty fast metabolic rate. I can’t speak for Beloved, though, which is why this will be the first and last time we try out a Wonderful Cup apiece.

Was it worth it. I don’t really know. Again, I personally believe our second visit was a terrible, terrible mistake. It’s not that it’s not worth it, nor was it bad tasting at all. It’s just that a single cup was enough for the both of us. Sadly, our disagreement with the amount of toppings versus the amount of yogurt conflicts, which led us to this situation. Again, if you’re trying this out, a 299 Php cup is good for two, maybe even three sharers unless you’re prepared to gain some pounds or waste good yogurt (which I certainly do not condone). I can’t fathom anyone soloing their largest 399 Php cup without regretting it afterwards. Still, it’s pretty fun building your own yogurt towers, which is why I feel Golden Spoon’s artist cups are worth the try. But we certainly won’t be going back here for a long, long time.

Not recommended for: People under a strict diet.