Beloved and I ate at Manang’s Chicken. Although they dub themselves “Ang Bagong Fried Chicken ng Pinoy”, they basically use a smiliar recipe as Bonchon Chicken’s or Chicken Charlie’s, which is the Korean Soy Fried Chicken. I actually enjoy this style of cooking, but they usually lack in the amount of meat for what you pay. I’ve heard of reverse from this place, where there’s plenty of meat to eat, but I’ve also heard some negative reviews from friends, claiming the chicken meat itself tasting poor and old. Last Saturday, out of whim, we finally get to try it out.

I finally understood why some of my friends thought the chicken meat itself was poor—they deep fry the chicken twice. This would probably make the chicken less tender and have that “old” texture. Knowing that, I decided to order the part which has more skin over meat—the wings. I ordered their 6 Pieces Wings Meal (199 Php). The chicken can have original, mildly spicy, and extra spicy coating. I asked them to give me at least one of each. Beloved, although she claimed she was craving for chicken, found another item in their menu that she fancied more, so she ordered their Sesame Beef Rice (122 Php). Both our orders included rice and drinks, but I also ordered their Small Barkada Bucket of Chips (170 Php), which came with four dips. Since they only had three choices, I asked for at least one of each. 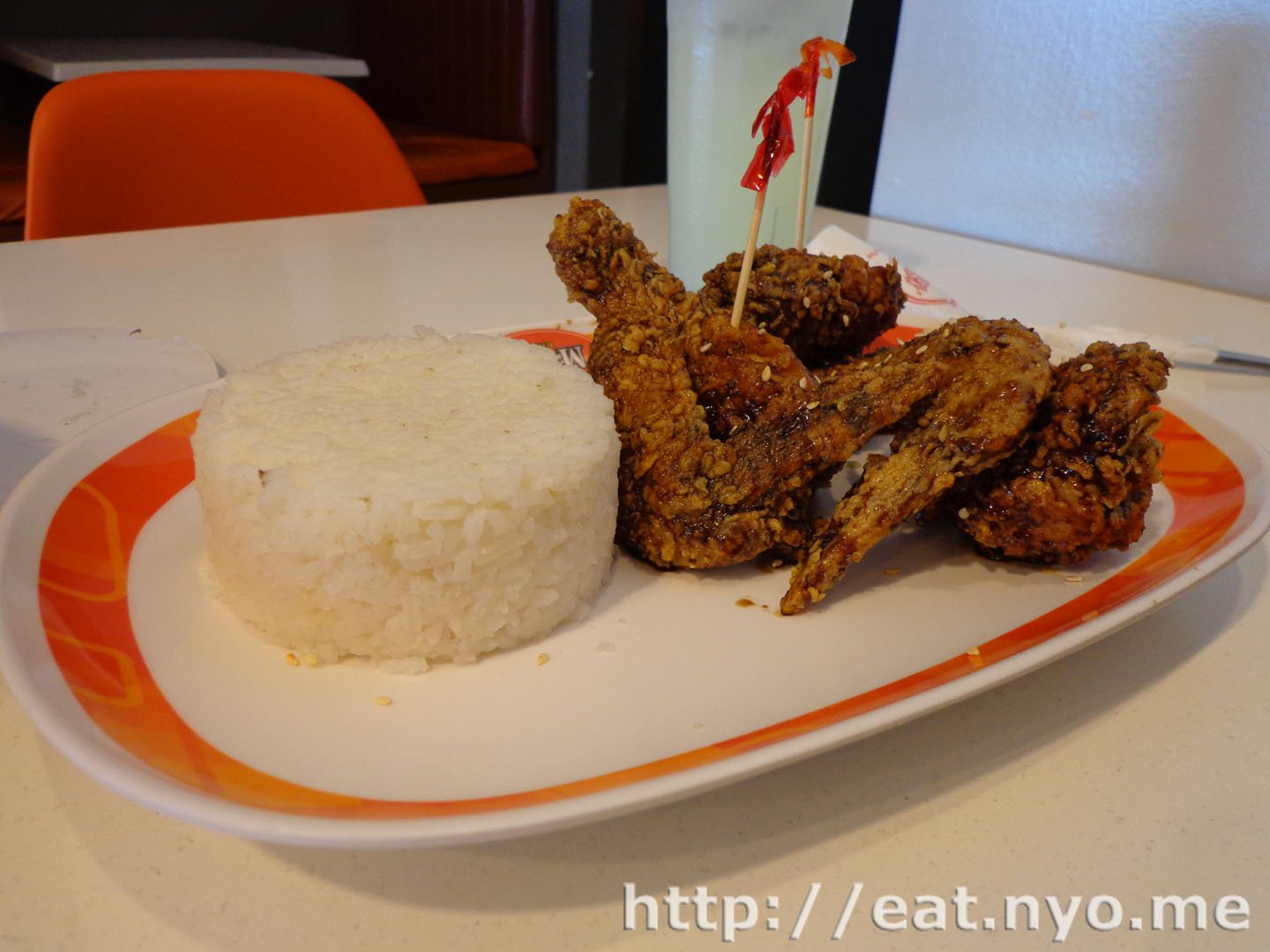 Although not as large as I expected, the 6 Pieces Wings Meal did provide me with three relatively large pairs of wings compared to their direct competition. I was a bit disappointed that they counted the drumette and the wing joints separate pieces, but I expected as much. As I asked, two of them had colored toothpicks marking the mildly spicy and extra spicy pieces. I tried the original first, and found a very sweet and crunchy exterior wrapping the chicken meat. The crunchiness came not only from the skin and breading, but also from the sesame seed coating it was covered in. The less meaty joints were more flavorful, as the sauce didn’t really permeate through the meat. The mildly spicy just had a bit of tang in it, and the extra spicy had a bit more bite, but both were bearable spiciness. I liked the middle one the most. 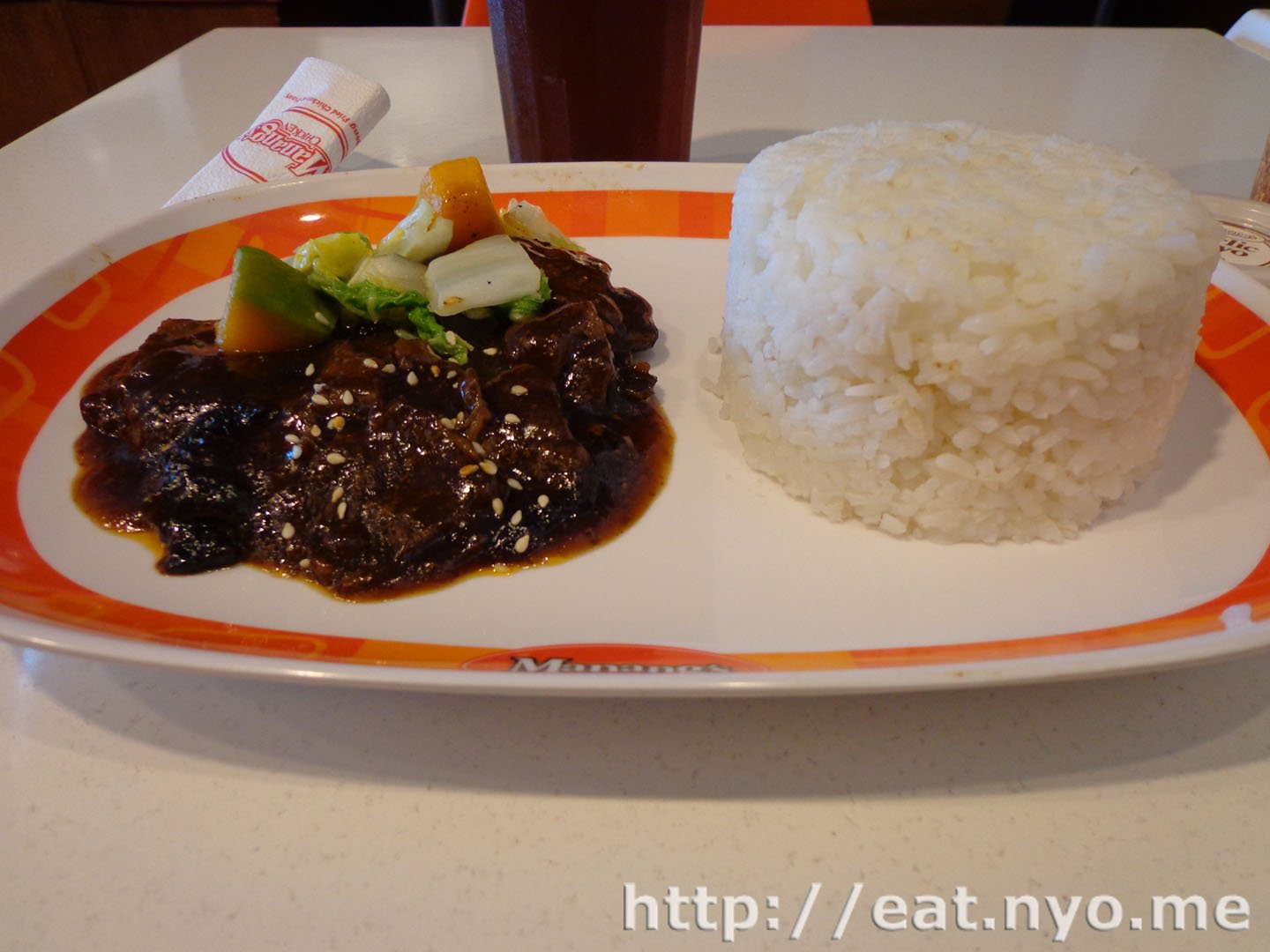 Beloved’s Sesame Beef Rice was not as generous as my plate. Then again, it’s not as expensive. The braised beef dish was covered in sesame seeds and thick sauce. It tasted similar to the coating they used in their original chicken sauce. However, Beloved was a bit disappointed that the beef was not as soft and tender as she wanted. 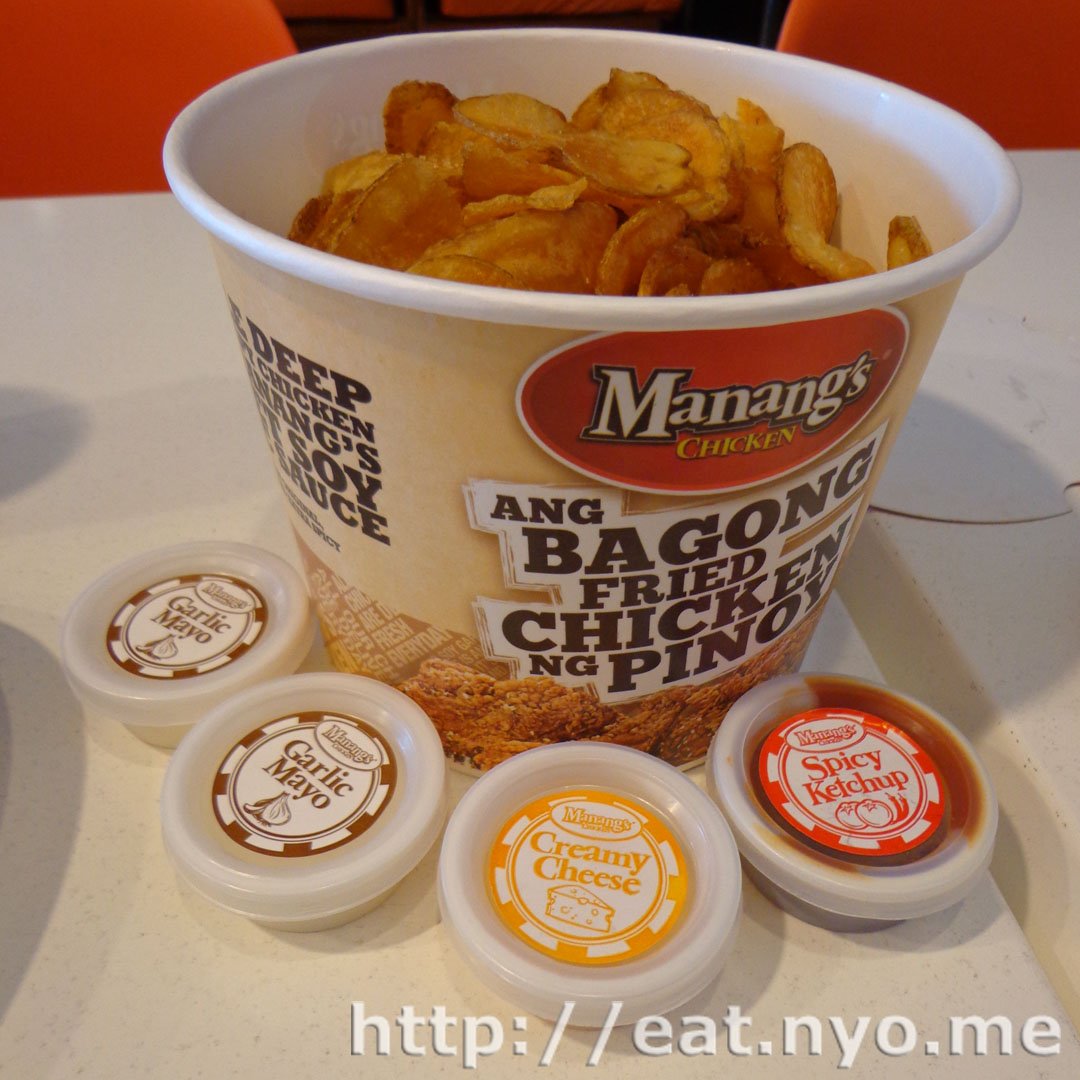 Perhaps the most surprising of our orders was the Small Barkada Bucket of Chips. This “small” bucket was advertised for three to four. I slightly underestimated it, since I can usually consume chips or fries of that quantity. The chips themselves were very crunchy. It felt like, like their chicken, it was deep fried twice to achieve such crispiness. The downside, like their chicken, is that they were devoid of any sort of fluffiness found in the superior style of deep frying potatoes (fries). I think they didn’t use real potatoes, though, perhaps sweet potatoes. Anyway, among the dips given to us—Garlic Mayo, Creamy Cheese, and Spicy Ketchup—both Beloved and I agreed that the tangy and garlicky Garlic Mayo dip was the best.

Overall, it wasn’t bad. It was not great either. Although their chicken was devoid of any greasiness, they also lack tenderness that at least both Bonchon Chicken and Chicken Charlie had. The main selling point of their chicken was the crunchy sesame coating. Although admittedly good, I prefer the thin, crispy skin of Chicken Charlie. Flavor-wise, they are all similar. I guess the original recipe here is the sweetest among the three. Also, this place probably serves the most quantity-wise over the amount you pay for, especially with the chips. Of course, I’m only talking about the soy fried chicken places I’ve been to. Manang’s Chicken, while not the best, was certainly worth the try.